One of those programs “saved my life,” said Shada Allen, a 23-year-old BUILD organizer who said a city after-school center gave her a safe haven in the 1990s, during especially violent times in her Greenmount neighborhood.

“It’s not much to do there and there were killings and murders every day,” Allen said. Asked how the after-school program helped her, the Morgan State University student smiled to recall it.

“I learned to speak fluently, to use computers, to go to a four-star restaurant and sit like a lady,” she said, after marching with the children past downtown Baltimore’s shops, hotels and office towers.

“It’s hurtful that they can send all this money down here and forget about our children,” Allen said.

Organizers said they chose the city’s tourist waterfront and business district to protest the millions poured into the area over the years for hotels and office towers in the form of government subsidies known as TIFs (Tax Increment Financing) and PILOTS (Payment in Lieu of Taxes). 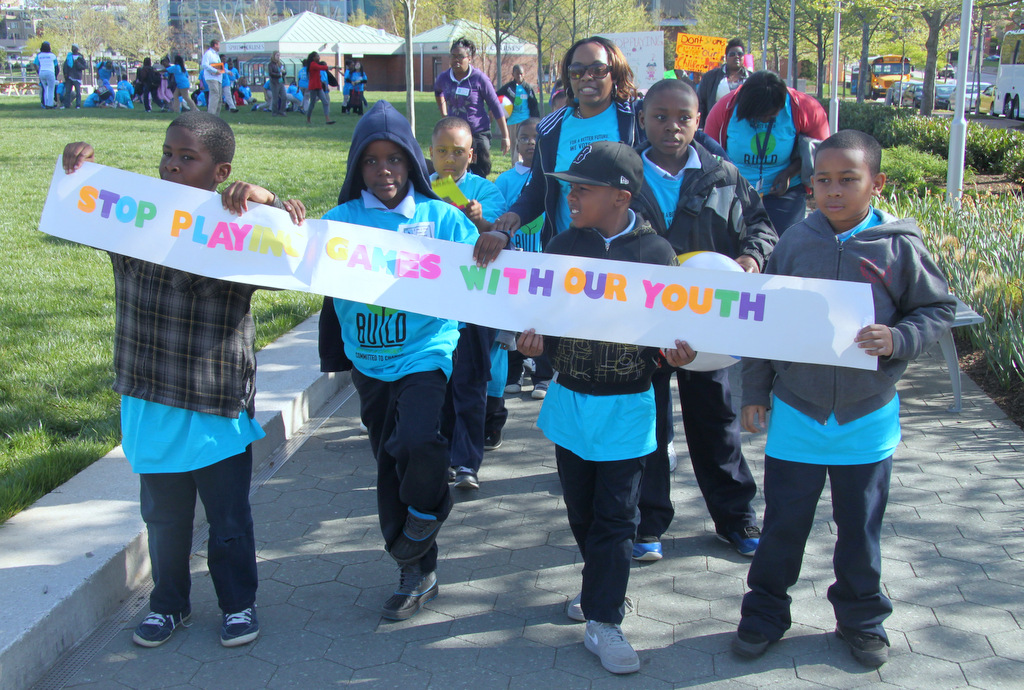 After parading through the city chanting “Save our youth! Save our city!” the group wound up at the Convention Center, which city leaders are proposing to rebuild (along with a new arena) at an estimated cost of more than $900 million.

“No more TIFs, no more PILOTs for downtown development until our children are placed first,” thundered Bishop Douglas Miles, clergy co-chair of BUILD. “Our children are our jewels, not the Inner Harbor!”

30 Programs Could be Scrapped

Administration officials have countered that the city’s $48 million fiscal shortfall has necessitated these and other cuts in programs.

Along with long-discussed plans to shrink and privatize the city’s recreation center program, it included a proposal to close seven public swimming pools. (That move would save $35,000 and reduce the number of people using the pools annually from 114,000 to 65,000, city officials say.)

Yesterday’s rally, though, focused on the $200,000 Rawlings-Blake is proposing to cut from the after-school program budget by funding only after school activities  at “community resource” schools. The cut amounts to 3% of the total budget.

Only 20 of the 50 schools with programs that are funded in part by the city currently have community-organization partners, according to Kevin Keegan, executive director of the Family League of Baltimore City Inc. (Funded with both tax and private dollars, the League administers the program.) To get the “community resource” designation, schools must have a community organization as a partner, and the community organization must supply an on-site coordinator. 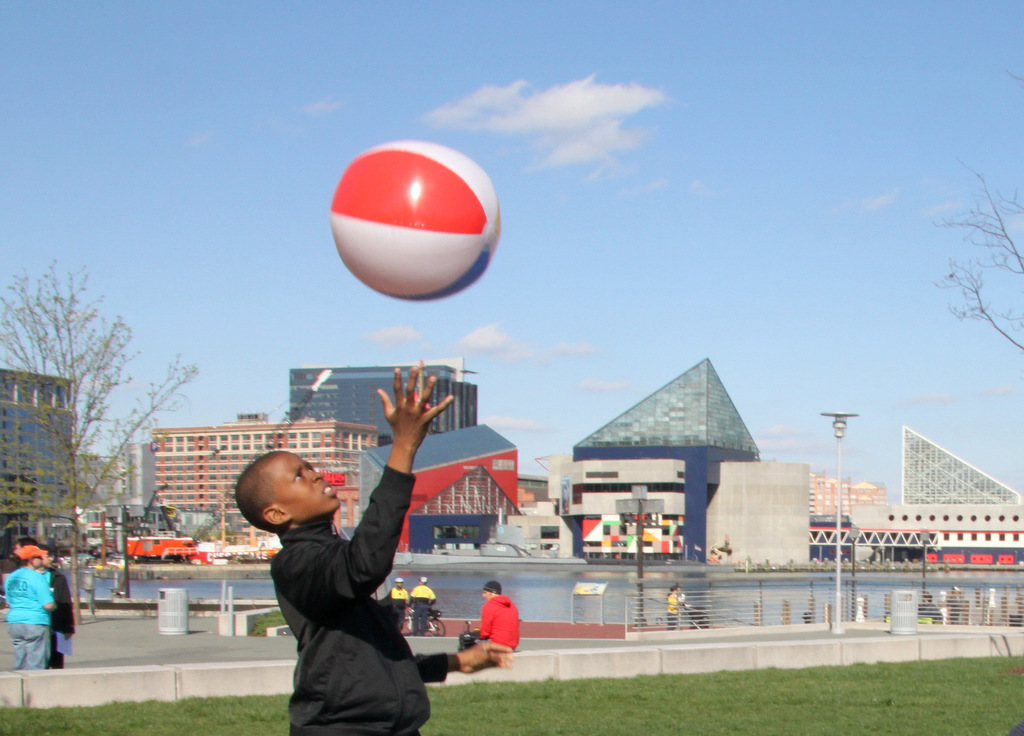 Playing near the Inner Harbor Visitor Center, before the march. (Photo by Fern Shen)

Keegan said the idea for the change was not so much to save money as to promote the partnerships, which in turn bring more resources targeted to the principal’s goals to the schools.

Miles wasn’t buying it. Pastor of Koinonia Baptist Church in northeast Baltimore, he said that the long-time after-school program his church runs would be among those cut.

“I have never seen people in the community more angry than they are right now about these cuts,” said BUILD clergy co-chair Andrew Foster Connors, of Brown Memorial Park Avenue Presbyterian Church. “Especially because she promised to do just the opposite.”

The “promise” reference dates to an August BUILD event, during the run-up to the mayoral election. Candidates were asked, “yes or no,” would they support doubling funding for after-school programs.

Miles brought an Etch-a-Sketch toy to illustrate how the Mayor, after winning election in November, appeared to be reneging on her promise. “Double funding,” he wrote, erasing the words and replacing them with “cut funding.”

“The Republican have no monopoly on Etch-a-Sketch politics,” he said. 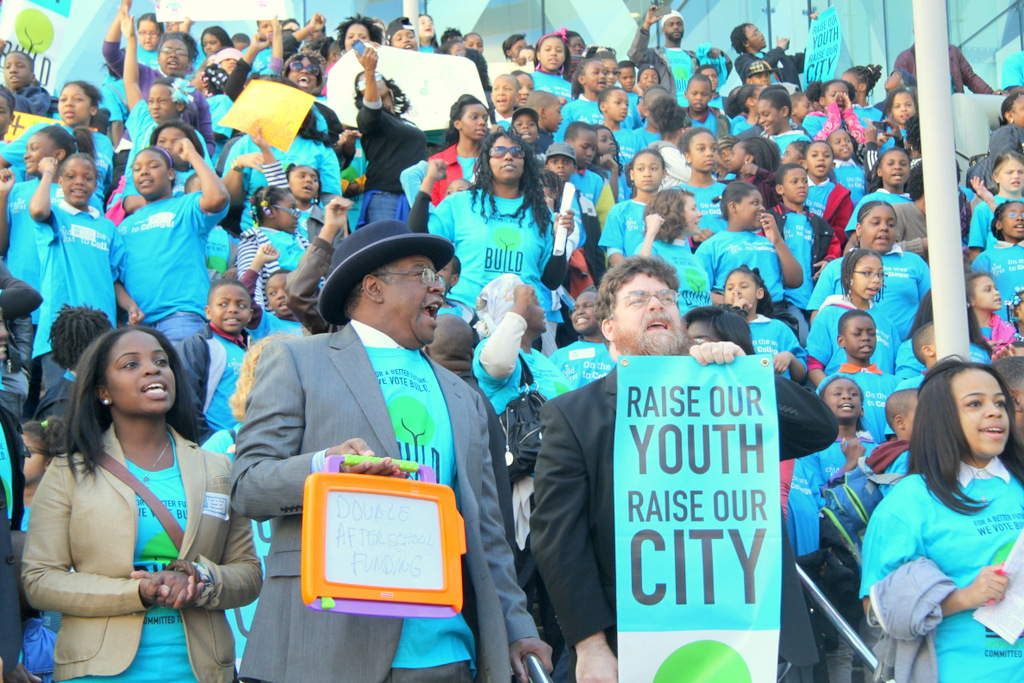