He just knows that Truck 15 helped save his family and home from serious harm a week ago.

Marks and four members of his family were asleep in their home last Friday morning when a neighbor’s panicked shouts and knocks at the door signaled that the vacant rowhouse next door was ablaze.

By the time Marks, his sister-in-law and three teenagers escaped from the rear, Truck 15 was at the back of the building.

Using a long aerial ladder, the fire crew cut ventilation holes in the roof of the Kennedy Avenue building and also accessed the basement to make sure all utilities were turned off.

“They did a very good job,” Marks said several hours later, as he surveyed the damage. “The ladders got them on the roof. They started spraying everything down and doing everything they do.”

Thanks to the quick work of Truck 15 and several other engine companies, his house sustained relatively minor damage, mostly singeing to the front door and porch rafters. His family was back in the house the next day.

What makes this story newsworthy is that Truck 15 is set to be disbanded on July 1 as a cost savings measure to help plug the city’s 2013 budget deficit.

Fire Chief James S. Clack and the Rawlings-Blake administration say that closing Truck 15, located in impoverished East Baltimore – plus Truck 10 in Harlem Park and Squad 11 in Greektown/Bayview – will not compromise the safety of residents.

The department has issued a strategic analysis, in the form of a Powerpoint presentation, that suggests the neighborhoods would still be covered within a 7-minute response time by other fire companies. (This would mean the coverage would be within the “full-alarm assignment capability” limit recommended by the National Fire Protection Association.)

Clack said permanent closures are preferable to the current system of rotating company closures, which his strategy analysis characterizes as “not operationally sustainable [and] should only be a temporary measure.”

Informed of these assurances, Marks expressed disdain as he stood on his porch. “Another 30 seconds, man, and my house would have been on fire! This was about as close as you can get.”

As the smell of burnt wood hung heavily in the air, a neighbor, William Boyd, agreed.

“We need that ladder,” he said, referring to Truck 15, smacking his hands together for emphasis.

Operating out of a red brick station at 1223 North Montford Avenue, Truck 15 has the distinction of being one of the city’s oldest and busiest fire companies. 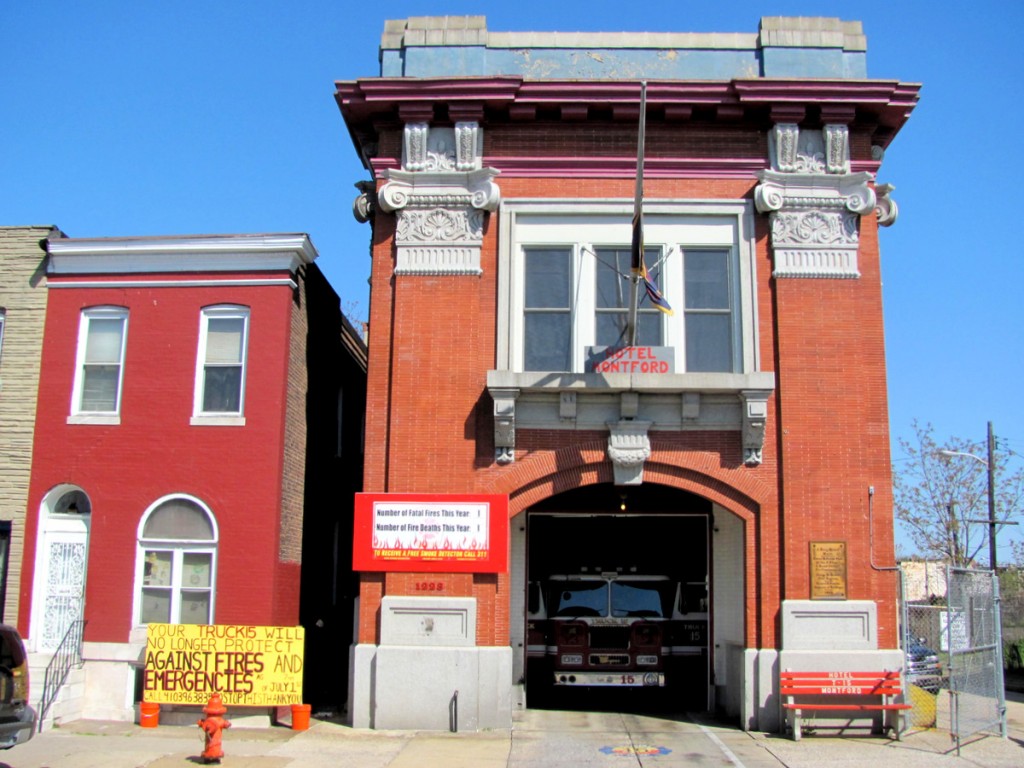 Established in 1908, the company last year handled 3,556 emergency responses – the largest number of any of the city’s 18 truck companies and slightly less than the busiest engine companies.

Earlier this week the company passed the 3,200 response mark, and is on its way to 4,000 or more “runs” by June 30 – the end of the fiscal year and, perhaps, its last day of operation.

Over several days, The Brew interviewed a dozen firemen at Truck 15 and other stations.

They agreed to speak freely in exchange for anonymity – a necessity because city employees are prohibited from talking to the media without authorization and without the presence of a public information officer.

This is what they had to say.

“We have the motivation,” said one firefighter sitting at a table near the spit-and-polish ladder truck. “I’m here because I want to be here. Every guy that’s here asked to be transferred here. No one is out of the fire academy.”

“This firehouse has the most walk-ins [in the city],” said another. “We are part of the neighborhood. Kids come here and they get air for their tires. The older people know us as ‘T-15.’ When something’s up, they call us, not 911.”

A member of another fire company agreed that there was something special about Truck 15.

“Pride is in the company. The men say, ‘I’m from this company or that company.’ That’s the mantra. And among firefighters, Truck 15 is legendary.”

Handling all Kinds of Problems

Like the city’s other 53 fire companies, Truck 15 responds to calls that go well beyond fires. They range from going a few blocks from the fire station to fix a water leak to sending out a truck to the scene of a traffic accident or stabbing.

“We’re ahead of the eight ball. We’re [at the scene] before the BPD or the medics get there oftentimes,” said one firefighter.

“And we’re the only city agency that when you make a call, we’ll be there,” said another.

Joked his colleague, “Even BG&E lets us come in [to a house] if there’s an emergency.” 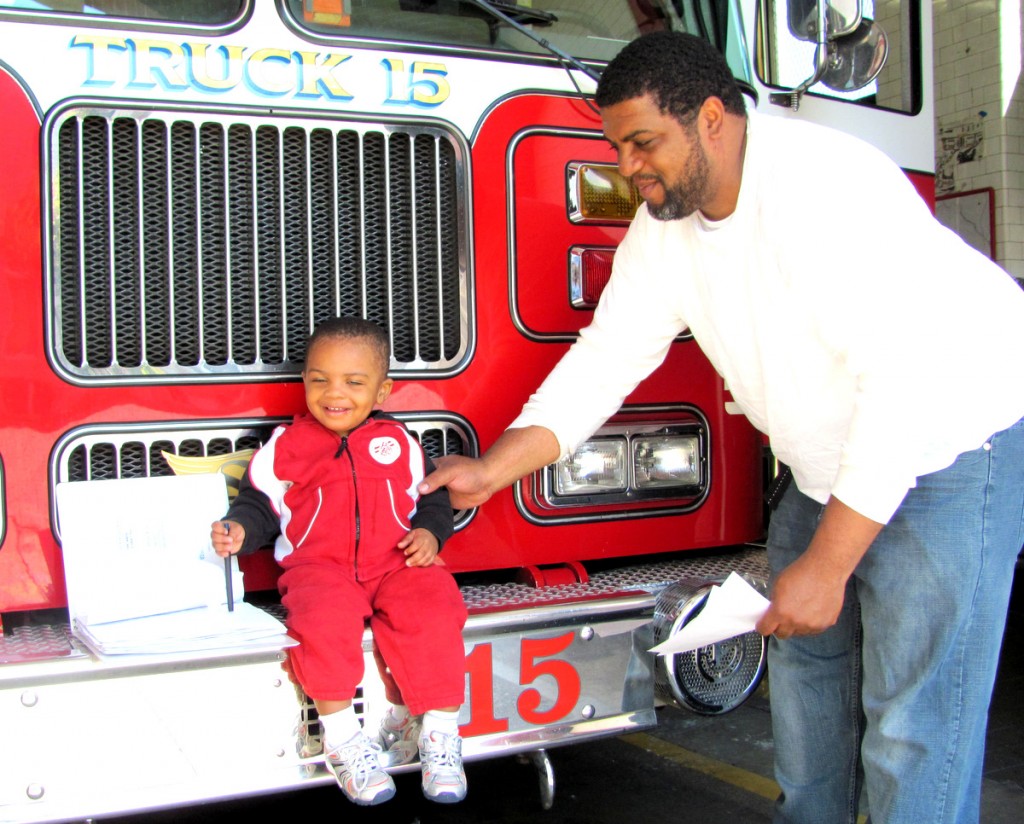 Anton Manning, age 16 months, recently took a tour of the firehouse. Asked his opinion about closing T-15, his dad, Anton Manning Sr., said, "It's an unfortunate decision based not on the community." (Photo by Mark Reutter)

Most importantly, they argued, (to a man) that disbanding fire companies will impact negatively on public safety.

According to Chief Clack, no firefighter will be laid off as a result of the company reductions, although 21 officers will be demoted in rank and 15 permanent positions abolished.

“I think we do a great job for the citizens and I just hate to see our resources spread out too thin,” said a high-ranking officer.

Baltimore does not meet the National Fire Protection Association’s standard for initial arriving times, according to fire department records. The NFPA calls on the first company to arrive at a fire scene within 4 minutes of dispatch 90% of the time.

In Baltimore, the first engine company is expected to arrive within 5 minutes 90% of the time.

In its strategic analysis released earlier this month, the fire department said that “response times [are] expected to improve slightly from current service, closer to NFPA standard.”

But according to the budget report prepared by the mayor’s office, the department’s goal for fiscal 2013 is to meet the 5-minute standard 85% of the time – not the current 90%.

Where Baltimore apparently does meet the national standard is dispatching a full compliment of engine and truck companies to a fire scene within 8 minutes. 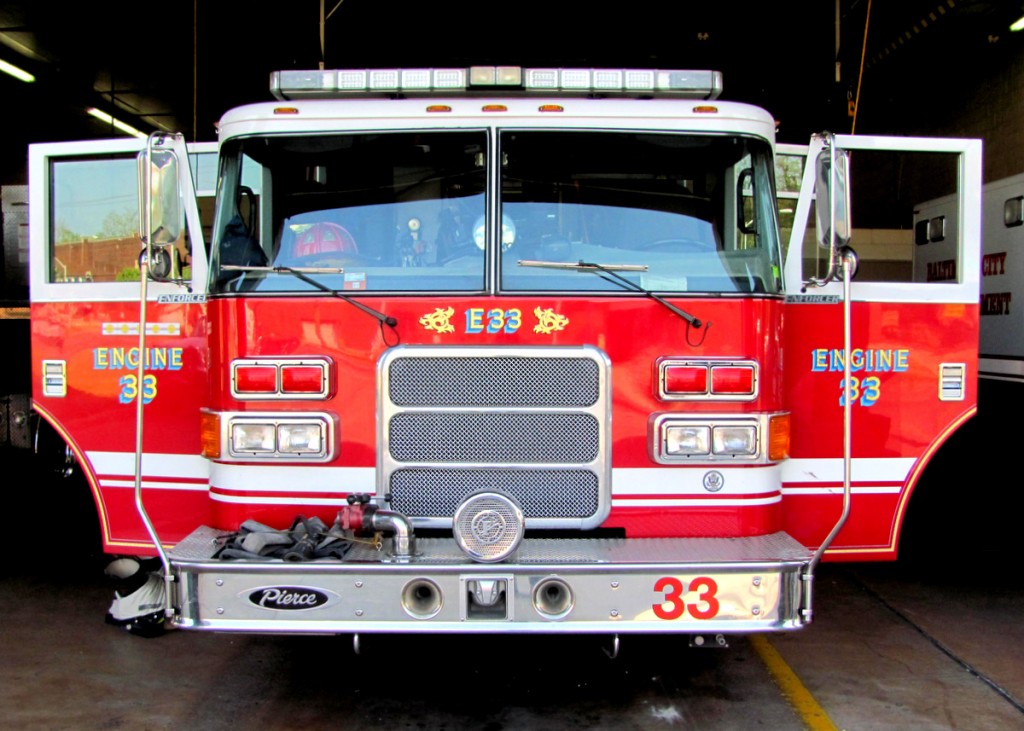 Engine 33 would be transferred to the Montford firehouse under the city's cost-saving plan. (Photo by Mark Reutter)

At last Friday’s fire on Kennedy Avenue, for example, Truck 15 arrived 2 minutes and 59 seconds after being dispatched, according to department records.

In the strategic analysis, the fire department says it can continue to meet the 7-minute standard with the three company closures.

All of the fire personnel interviewed by The Brew expressed skepticism, saying that the department is using a computer model that does not factor in real-world conditions.

“This is a static model that is only accurate if every company is at its station and ready to deploy,” said a veteran officer. “A single 911 call can throw off the model. It can create a hole that cannot be filled within the stated response times.”

An Engine is Not a Truck

The plan in East Baltimore is to relocate Engine 33 (currently at the Kirk  and 25th Street fire station) to the Montford station after disbanding Truck 15.

The problem with the plan, according to firefighters, is that an engine company can’t operationally substitute for a truck.

“The two aren’t the same. An engine company’s primary goal is to establish water and advance the hose line into the property, while a truck company is responsible for rescue and ventilation,” said the high-ranking officer.

An engine company carries 24-foot-long ladders, while the ladders on a truck are 100 feet. “There are a lot of three-story rowhouses in East Baltimore,” said a firefighter. “You simply can’t throw up a 24-foot ladder and get to the third floor for a rescue or to the roof for ventilation.”

Currently, the fire department deploys 18 truck companies and 36 engine/squad companies, following the longstanding standard of a 1 to 2 ratio.

Under the new plan, there would be 16 truck and 35 engine/squad companies. In addition, the fire department operates Emergency Medical Service (EMS) vehicles, hazmat apparatus and a fireboat in the harbor.

The Rawlings-Blake administration has trimmed $8.8 million, or 7%, from the fire department’s “suppression and EMS” budget. The savings will come from freezing firefighter pay for 2013 and from “net personnel savings from converting rotating closures to permanent closures.”

The budget report does not break down how much will come from the pay freeze and how much from the closures.

Nor has the mayor’s office described the criteria used to determine which companies to close or the possible impact of moving scores of firefighters from areas they are familiar with into new territories.

Baltimore City Councilman Warren Branch, chair of the public safety committee, plans to hold hearings on the closings. Branch is strongly opposed to the disbanding of Truck 15, which is located in his district, saying very little about the closure plan has been publicly discussed by the administration.

The City Council has little authority to act outside of political pressure and lobbying. Under the City Charter, the legislative body can reduce the spending in the budget, but can’t increase or restore funds without the mayor’s consent.

Thus the fire closures will go forward, when the next fiscal year starts on July 1, unless Mayor Stephanie Rawlings-Blake decides otherwise. 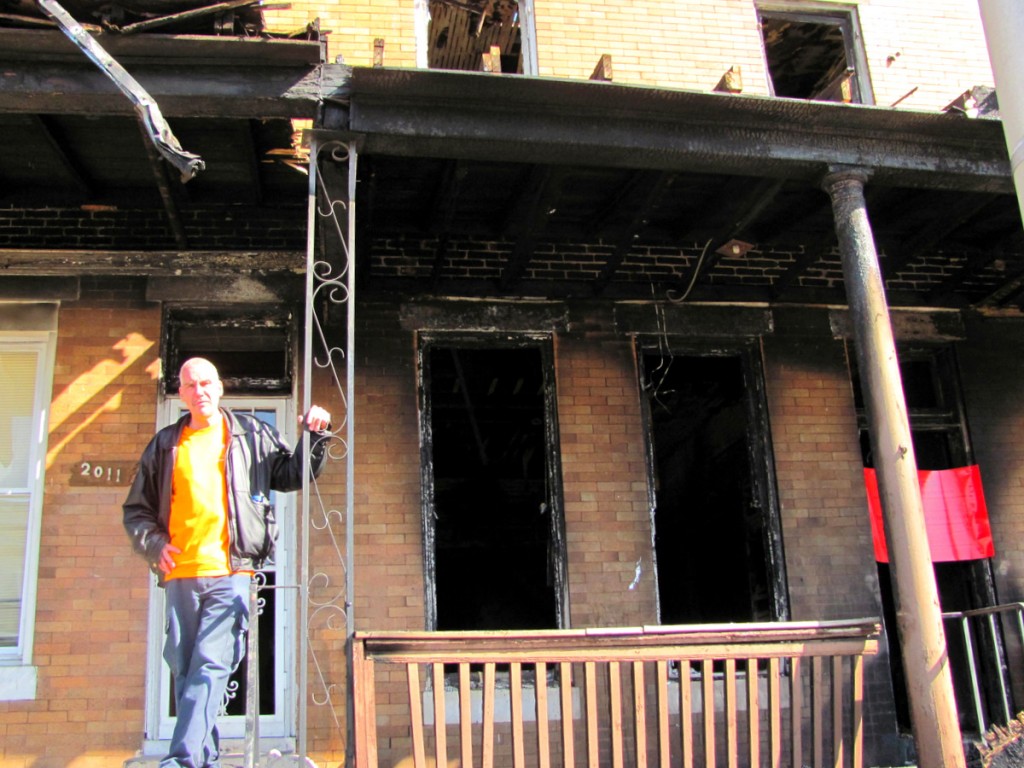 "Another 30 seconds, man, and my house would have been on fire!" exclaimed Marks. (Photo by Mark Reutter)

The two unions representing firefighters have called on Rawlings-Blake to continue the rotating closures for another year as a “compromise” plan.

Michael B. Campbell, president of Fire Officers Local 964, told The Brew, “The fire department needs to be fully funded, but instead we’re presented with a Hobson’s choice of taking rotating shutdowns or permanent shutdowns.

“A compromise,” he said, “would be to continue the status quo [rotating closures] because you’re not taking as much of the public’s safety net away. And hopefully funding can be restored when the economy improves.”

The fire’s department budget for fiscal 2013 has not been cut across the board. The plan calls for a $3.1 million increase for administration.

This increase is partly due to expected increases in worker’s compensation expenses, which is handled by fire headquarters.

The administration will also get more funds for upgrades to the information technology unit, “which will allow for faster responses to 911 calls through Automatic Vehicle Location (AVL),” according to the agency’s strategic analysis.