Rallying the troops before the election, organizers of the effort to give some illegal immigrants access to in-state tuition rates fortified about 200 of their supporters yesterday with soft drinks and sandwiches and armed them with fliers.

But hearing the story of an undocumented young man from Panama probably gave the crowd their most powerful boost, as they prepared for a chilly day of canvassing in East Baltimore on behalf of Ballot Question 4, the so-called Maryland Dream Act.

“I could not attend the college of my dreams because I could not afford it,” said Jonathan “J.J.” Jayes-Green, who said he came to America at age 13. 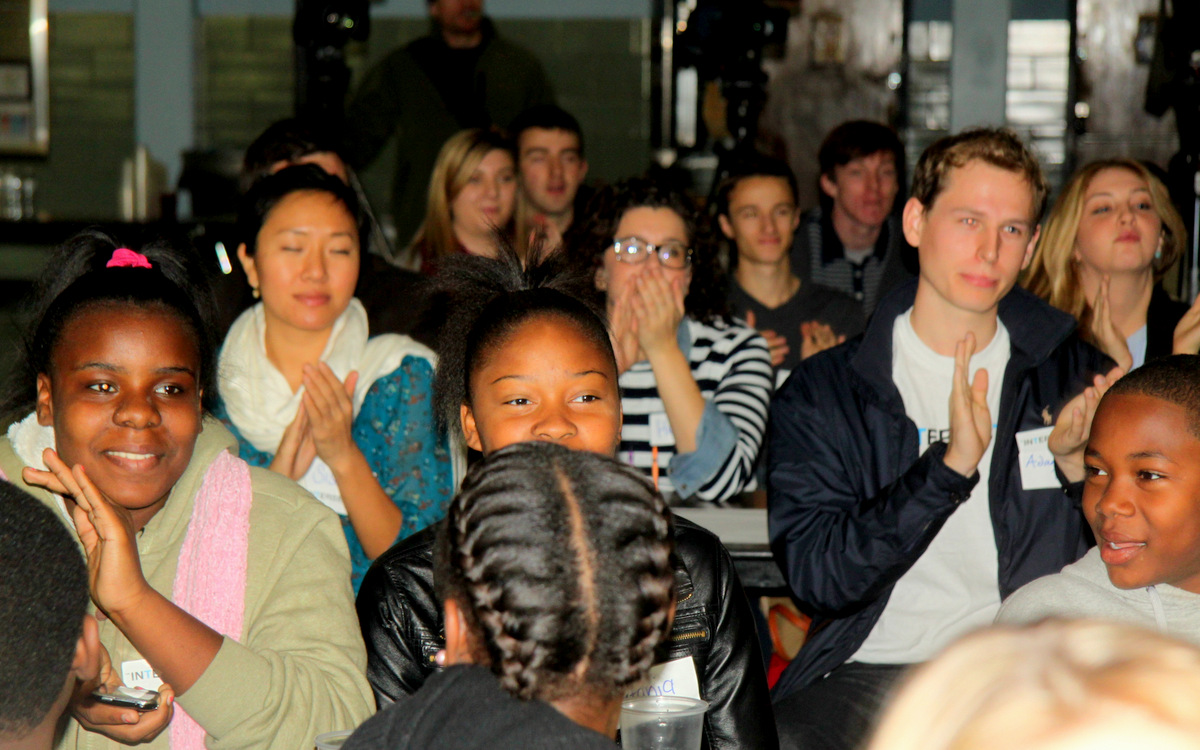 “Education is power,” speakers told this crowd, rallying to canvass in Fells Point on behalf of Question 4.

But Jayes-Green said he hit a roadblock when it came to the University of Maryland, where he wanted to study public policy or sociology.

Because of his immigration status, he wasn’t eligible for the $8,000 in-state tuition rate and instead faced the prospect of $24,000 annual out-of-state rates.

“It was more than my family could afford,” Jayes-Green told the crowd of mostly college and high school students, organized by the youth leadership group, The Intersection, assembled at Baltimore Freedom Academy.

“But that’s why my mother pushed and left her job as an accountant to clean houses here” in the U.S., Jayes-Green said, “so I could have a brighter future.”

A Perfect Storm for Voter Turnout

Polling shows a close contest on Question 4, with a slight edge going to supporters. According to the most recent Baltimore Sun poll, which showed 47% in favor and 45% opposed. (The poll has a margin of error of 3.5%.)

Opponents, who petitioned to put the “Maryland Dream” law passed by the legislature this year on the ballot, argue that giving illegal immigrants “a free ride” will bankrupt the state and is unfair to in-state residents here legally.

Supporters note that the law at issue requires the parents of the students to have filed Maryland income taxes for three years. 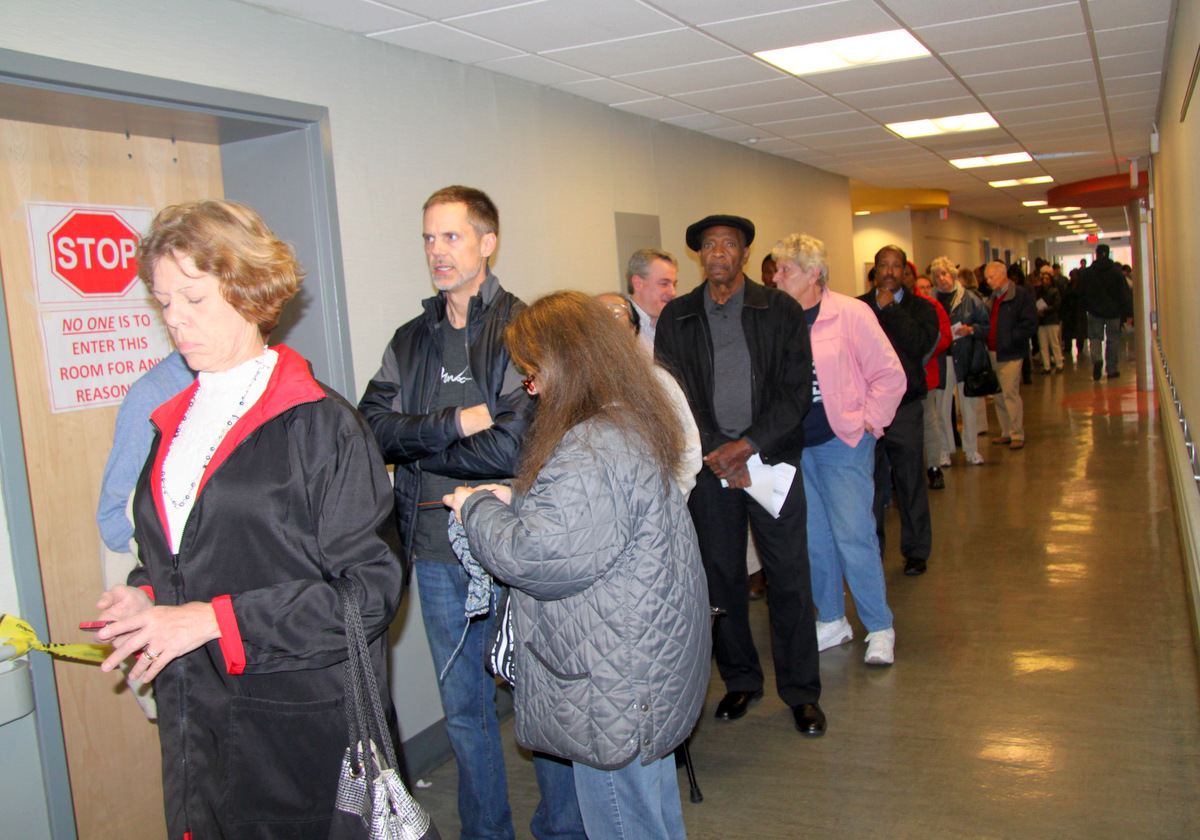 Early voting early at 1111 E. Cold Spring Lane, where waits of more than an hour and lines stretching outside and around the building were not uncommon. (Photo by Fern Shen)

Question 4 – along with other hotly-contested ballot measures (such as Maryland Question 6 allowing same-sex marriage and Question 7 allowing for the expansion of casino gambling) – are combining with a too-close-to-call presidential race to make for the perfect storm of turnout.

Early voting in Maryland clocked in at 430,573 votes cast by the time the polls closed Friday night after five days of voting, according to the Maryland State Board of Election Law. That’s 11.6% of eligible voters – almost double the turnout in 2010 after six days of voting in the gubernatorial race.

Responding to complaints from voters about hour-long waits and traffic congestion at early voting locations, lawmakers pledged to introduce legislation expanding the hours, days and locations.

Meanwhile the canvassing , rallies, television, radio, web and newspaper ads and robo-calls continued in what is shaping up to be a record-setting election not only in early voting turnout but campaign spending.

Powerful interests with stakes on either side of Question 7 – expanding gambling at National Harbor or restricting gambling to five previously designated sites – have so far spent close to $90 million to sway voters.

That’s more than what was spent in the last three Maryland gubernatorial races combined!

To Give Others a Chance

What’s at stake for Jonathan Jayes-Green  is no longer his own future. he told The Brew before yesterday’s rally. Now a student at Goucher College, he said he received a private scholarship that is allowing him to pursue a degree there.

“But it’s ironic, because it’s higher tuition and room and board, when I could have been attending the University of Maryland for much less, and  it’s around the corner, relatively speaking, from where I live,” he said.

Jayes-Green said he’s been canvassing, speaking at rallies and addressing faith communities to try to make the path to a better life easier for others who, like him, grew up without legal status. That’s what brought the students, and many of their teachers, to Sunday’s rally.

“One of my goals is to go to college. This goal is shared by many of my peers. But I realize that many of my friends cannot go to college because they are undocumented and therefore cannot pay in-state tuition rates at Maryland colleges,” said Intersection organizer Antonio Crossly, a junior at Baltimore Freedom Academy.

“I want to make sure a college education is not restricted but is readily available to anyone willing to work for it,” Crossly added.

U.S. Senator Ben Cardin, who addressed the rally and is running for reelection, said he supports Question 4 because the state needs to educate students like Jayes-Green.

“I believe Maryland will lead the nation by passing the Dream Act, which is about fairness and about education for our children, many of whom have known no other country than the United States,” he said.