If Baltimore officials expected to be uniformly praised today as they announced their plan to yank the license on a problem-plagued apartment complex off North Avenue, they were sorely disappointed.

Scattered among the media were mothers, children on bikes, teens with basketballs and joggers passing through who all agreed with officials about the seriousness of the problems at the complex, but many were strongly opposed to the city’s solution.

“A lot of us have nowhere to go,” said one resident, Crystal Jackson. “If we had money, we wouldn’t be here in the first place. There’s no way we can just pack up our kids and go. It’s not fair. What are we supposed to do?” Jackson asked.

Today’s ceremony was the formal announcement of a plan that became known yesterday: invoke a rarely used legal maneuver to revoke the license of the 202-unit apartment complex, saying that drug dealing and violence there was becoming unmanageable.

Graziano explained the move as one of last resort. He said that the city felt it necessary “to take an action that we don’t take lightly” because “reasonable approaches are not yielding the results needed.”

Two people were killed in the past six weeks at the complex, he said, and the second homicide reinforced officials’ belief that bold action had to be taken.

“Violence has been a nuisance and we will not tolerate it anymore”  – Mayor Rawlings-Blake.

That second murder propelled the mayor to call upon the housing department and the police to do everything possible. He emphasized that the city has been “working for years with the owners to no avail.”

“People who live here and around here are very aware of the problems” and on the owners side “there have been no significant improvements of the conditions,” Graziano said.

“Violence has been a nuisance and we will not tolerate it anymore,” Rawlings-Blake declared, vowing that the city will use “any and all enforcement tools against irresponsible landlords to help protect our law-abiding citizens.”

With today’s announcement, she continued, Baltimore is “serving notice to all landlords in Baltimore that we will not tolerate irresponsible landlords making our residents prisoners in their own homes.” 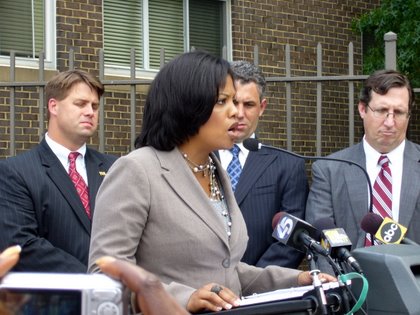 Mayor Rawlings-Blake announces the city’s intention to revoke the complex’s license. To her left is Councilman William Cole, who pushed for the revocation. (Giselle Chang)

A principal in the Los Angeles-based company that owns and manages the building said the city’s announcement caught her totally off-guard.

“We have been doing a good job,” said Shelby Kaplan, president of Tri-Cap Management, Inc. We have 24-7 security over there now. We have been passing all our inspections.”

Kaplan said her company had been working with city and neighborhood officials and thought they have been successful in improving conditions in the apartments and stamping out the most visible drug dealing.

In a phone interview, Kaplan said that she was “so disappointed to be receiving this [email] letter from the city yesterday with no advance warning. That’s not how I do business.”

Shutting down the complex will be a hardship on longtime residents, she continued.

Is the proposed shutdown part of the trend in which the city’s occupied inventory of subsidized housing has dropped nearly in half over the last 15 years?

“A lot of my residents have been there 30 years and they are going to be devastated by this. My residents are lovely people and the ones that aren’t – we get rid of them.”

Kaplan blamed the violence at the complex on drug dealers coming in from other neighborhoods and said much of the problem has been solved by restricting parking near the back of the complex to residents only.

She said she missed the greater police presence at the complex when, under a previous commissioner, cops were allowed to work private-duty jobs at Madison North. “Things were better when they were there.”

Although city officials are pointing their fingers at landlords and blaming owners’ irresponsibility for the problem, some residents think they’re looking in the wrong direction.

“The cops don’t do their job,” said Darlene Holiday.

Instead of patrolling the streets and protecting the citizens, Holiday said, they harass people. “Just yesterday I opened up the door to a nine millimeter in my face” and some vague questions from a police officer about a murder suspect, she said.

Another resident of the neighborhood, Michelle Nickelson, said her godson was one of the people recently killed in the apartment complex and it might not have happened if there had been more police protection.

“My godson got killed last month. Where was the police then?” Nickelson demanded. The cops “need to start stopping these crimes. They need to do their job.” 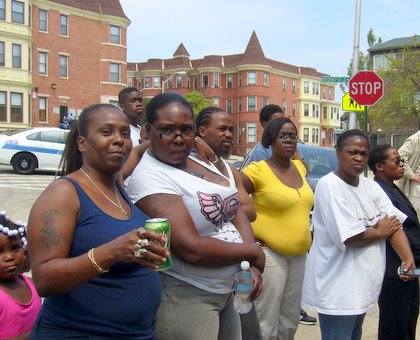 “Everybody won’t get a voucher”

Many residents observed there was little chance the license revocation would solve the city’s widespread crime and violence problems, but a high probability it would put them out on the streets, without a home.

Graziano said today that should the apartment’s license be revoked (a hearing has been scheduled on September 9th) the U.S. Department of Housing and Urban Development “will provide Section 8 vouchers to anyone who qualifies and we (the Housing Department) will assist these families in their moving.”

One fearful resident was Esther Robinson, who lives in the Madison Park apartments with her daughter. Robinson wanted to know what exactly the qualifications for the vouchers would be as her daughter has a criminal record and if forced out of the apartments, Robinson, her daughter and the rest of her family could be homeless.

“It’s not fair! Everybody won’t get a voucher,” cried Crystal Jackson. A mother of five, Jackson is similarly concerned about being denied a voucher.

The fears appear to be well-founded.

Studies show the inventory of subsidized housing in Baltimore is shrinking, and the Madison Park matter is likely to re-ignite debate over the city’s dearth of affordable housing.

The proposed shutdown is likely to re-ignite debate over the dearth of affordable housing.

Housing advocates have been complaining for years that the city is systematically shrinking the pool of housing available to the city’s poorest residents.

A September 2007 Abell Foundation study documented that the demolition of city public housing has resulted in a net loss of more than 2,000 units.

Is the city’s Madison Park action part of that process?

The last time the city revoked an apartment’s license (the Pall Mall Apartments in Northwest Baltimore in 2005) the owners lost the building to foreclosure. The city purchased the complex and bulldozed it the next year.

As much as they fear leaving, however, residents like Holiday acknowledged yesterday that Madison Park is a dangerous place and expressed hope that, risky as the move might be, it would put them finally in a better place.

Officials were optimistic on that point. Councilman Cole, one of the major proponents of the license revocation plan, said it could have prevented the murders, murders that “could have been and should have been prevented.” The move, he said, was “a great start” for the community.

Holiday put it much more cautiously.

If the current building management’s license is revoked and the process possibly brings her a new home, “We simply got a better chance of not getting hurt.”