“A lot of people come by and think this place is abandoned,” Morris Martick told me as I settled into his windowless, dimly lit restaurant for another round of conversation in 2008. “And that,” he growled happily, “is alright with me.”

Outside a cyclone of cars and trucks whirled down Mulberry Street, hell-bent on getting somewhere else. Morris always was the polar opposite. Back in the 1950s and 60s, he created a special sanctuary for Baltimore artists, musicians, poets, newshounds, outcasts and drunks by never leaving the house of his birth at 214 West Mulberry.

Then he kicked them all out, closed his little tavern and set out on an existential journey to France. He was creatively spent and “emotionally crippled,” he told me, adjusting his worn wool cap and picking up the thread of narrative.

“People think I went to cooking school in Paris. That’s all fable. I got my experience in ‘French cooking’ in a kitchen in Pacy-sur-Eure. Taking out garbage, chopping vegetables. Was there for two-three months, learning the restaurant business from the ground up.”

I Try a French Restaurant with Tuxedoed Waiters

When he returned to Baltimore, there were two French-styled restaurants in the city – Danny’s on Charles St. and Marconi’s on Saratoga St.

Morris decided to make it three. “I redecorated the whole tavern” – that’s where the snakeskin wallpaper and B-52 fuselage aluminum made their remarkable debut – “hired a chef from Paris and put tuxedos on the wait staff.

“We opened in 1970. The place was absolutely packed. Trouble was the chef. He couldn’t get the food out of the kitchen. He just couldn’t do it.”

The chef hit the booze. Martick hit the ceiling. Soon the wait staff found itself separating the two when the chef brandished a carving knife at the boss. 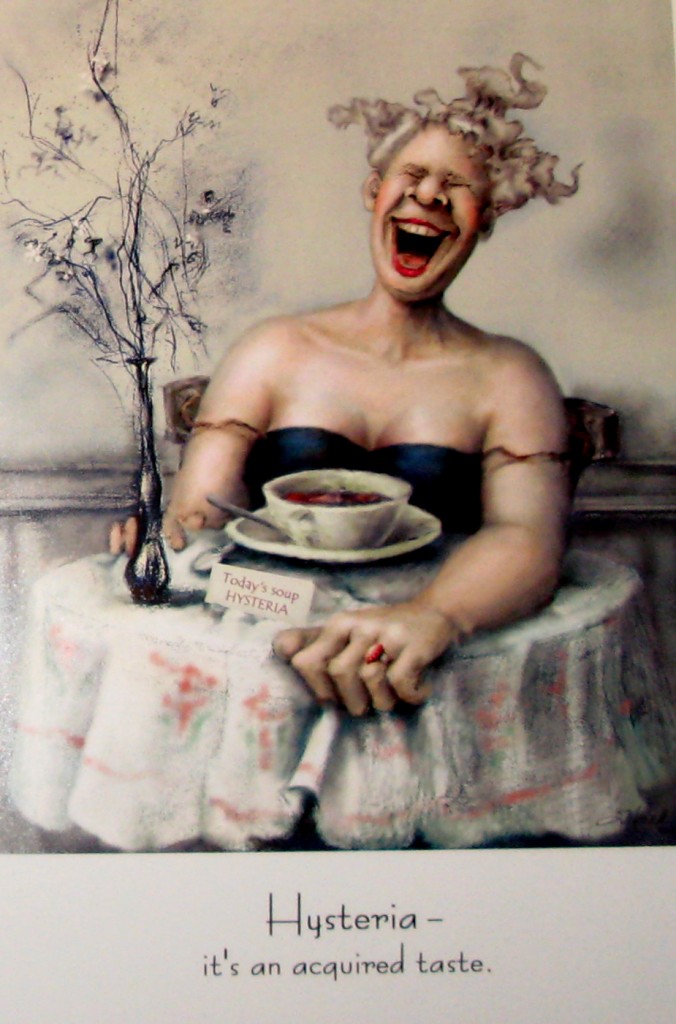 This print, sitting on the mantelpiece, set the tone of Baltimore’s most memorable restaurant. (Photo by Mark Reutter)

In other words, Martick’s restaurant experienced a full-frontal public meltdown.

“Like a violent thunderstorm, it suddenly stopped. Nobody came anymore. I had put all my money into a French restaurant and I ended up with an empty restaurant.”

I Try Again in My Drawers

Martick’s survival instincts kicked in. “I took all the stuff the chef made and threw it away. I said, ‘I’m just going to cook what I know how to cook. Or what I thought I knew how to cook.’ Of course, I didn’t have any more customers. But I’m from the old school. I’m not a quitter.”

Morris had cooked during his tavern days. His $4 steak dinners were widely admired; a couple regulars insisted that he make all of their evening meals. He had a compact commercial kitchen at the head of a steep staircase to the second floor, plus a slew of pots and pans purchased for the French chef.

He never again hired a chef. Until he retired in 2008, he did all the cooking himself, supplemented by a loyal band of part-time cooks and wait staff who remember him preparing his sauces and pâtés on hot days stripped down to tight and not-so-white drawers.

Asked about the underwear, Morris wouldn’t deny it. He let the image linger in the dark catacomb of his dining room, until finally acknowledging that his attire was “atypical” for a fine French restaurant.

“I work in the kitchen. I can’t wear a jacket and a tie and a clean white shirt, can I, boss?”

•  Because he was a good and imaginative cook. “I read a lot of cookbooks. Cooking is basically a skill, and my understanding of cooking gradually began to grow.”

His secret? “I make good stocks. That’s my secret.” Tired of the pretensions of Parisian chefs, he relied on what he had learned at Pacy-sur-Eure: “Keep everything as simple as possible, use fresh ingredients, don’t overcook. And pay attention to the nuances.”

“I wrote my own menu. I changed it occasionally. I made specials. And I made all the desserts. I started getting customers when the customers said the food tastes good. The only satisfaction you get is when a customer tells you he enjoyed the meal. That’s about it. It’s otherwise very exhausting.”

•  Because he orchestrated an ambiance that couldn’t be found anywhere else. Not just the outré decor, but the controlled chaos of the wait staff and the whimsical attitude of the owner became trademarks of the Martick dining experience.

When a new customer asked what Morris would recommend, he’d invariably say, “Another restaurant.” What was his best dish? “Confusion.”

He’d snap and snarl at his help (a favorite foil for his kvetching) until, miraculously, the food emerged from the kitchen and settled upon the gingham-covered tables of his downstairs customers.

“It took about 10 years before I made a profit. Not a big profit, but at least I went from losing money to making a little bit of money. The first successful year I made $5,000 for a whole year’s work. People said, give it up, but I’m not a quitter.”

He was “untouched by big shots or celebrity,” said Matty Nadol, who worked for Martick on and off for several years.

When a party of conspicuously attired diners beckoned him to sit at their table, he’d either refuse or bring a plate of fruit and fiber cereal with skim milk to eat while they consumed his fine French food. 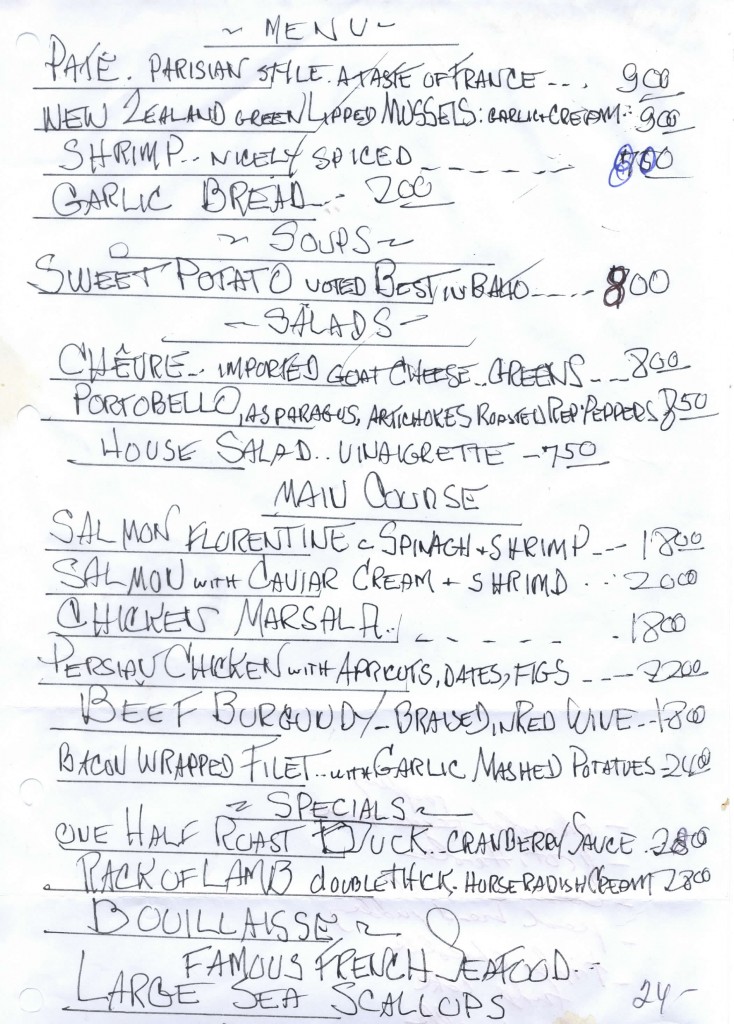 Martick’s handwritten menu in 2008. Missing were the fabulous desserts – crême caramel, peach bread pudding and profiteroles – he made from scratch. (Courtesy of Mark Reutter)

All of this conjured up what is perhaps the most famous lore recalled by Morris admirers – the tendency of his trouser fly to be partly or wholly open when he was around customers of note.

“He was the original unzipped Baltimorean,” quipped a former worker who wished not to be identified.

Morris took the Fifth when I asked him about it. But he didn’t bother to hide his devil-may-care grin.

Confronted by vandalism in his not-so-safe precinct of the city, Martick responded with what he considered perfect logic.

He explained, “People would walk by and break the front windows. And a couple of times they came in through those windows. So I just boarded them up. I don’t have that problem anymore. Cause it looks like I’m closed. And that’s fine with me.”

In his heyday, Morris served about 200 people a week. That number dwindled to maybe 60 or 70 in his later years.

“If you come once in 20 years, you’re now a regular,” he deadpanned, before adding, with touch of wistfulness: “When I opened up, there were a handful of [upscale] restaurants. Today there’s hundreds. Many can’t be differentiated. But people still go.”

Like the alternating walls of snakeskin and aluminum sheathing at his restaurant, Morris Martick’s legacy is not easy to pin down.

His restaurant was a catalyst of several cultural and culinary trends in this city – a speakeasy that featured emerging artists and cultivated young musicians, a restaurant that introduced fine cuisine to a mashed potato and burger town. And yet he remained firmly rooted within himself.

Except for his daily shopping trips in his red Ford pickup, he rarely left the house on Mulberry Street. Matty Nadol said he was a loner at heart. Yet this loner let thousands of strangers share his home for nearly his entire adult life.

“When you say Martick is an institution, you ought to put mental in front of it,” Morris liked to say. He was right – it was his freewheeling thoughts and Dadaesque actions, not the size of his restaurant or the nonexistent trailing zeroes in his checkbook, that defined the man and helped sire a more open-minded (and better-fed) Baltimore.

“I never wanted to make a million dollars,” he sighed one afternoon, getting ready to lumber up the stairs and return to the evening’s prep. “I don’t want the problems. I’m better off with a small number of customers. That way I don’t have to work too hard.”

Morris remained at 214 West Mulberry after he closed his restaurant to the public in August 2008. He continued to cook for intimates, but otherwise spent his time reading (he was devoted to French literature), attending movies and local art shows and hauling around stuff for friends or for a few bucks.

Michelle Gienow reports, in a nicely done tribute in City Paper, that he collapsed last October while walking down Howard Street and was diagnosed with advanced lung cancer. Many of his friends were unaware of his illness before he died on December 16 at Union Memorial Hospital.

He is survived by a brother, Alex Martick, and a sister, Rose Martick. Several Facebook pages have been started by ex-employees and other admirers, including “The Wisdom of Morris Martick.”

A celebration of his life is being planned by family and friends for next month. You haven’t heard the last from Morris yet.