The people Morris Martick screamed at, cooked with, cooked for, fired, rehired, insulted and nurtured – in other words, the people who really knew and loved him – gathered yesterday at the Charles Theatre to remember the one-of-a-kind restaurateur, who died last month.

For a couple of tender, ribald hours, this crowd of nearly 300 people brought Morris, and the bohemian boom times of Baltimore in the 50s, 60s and 70s that he personified, back to life.

Some of the speakers, like his brother Alex Martick, did it largely by virtue of shared DNA.

“If Morris were alive today, Morris wouldn’t be here,” the 83-year-old baby of the family said to the assembled memorial crowd. “He’d be at my house, eating good healthy sandwiches and watching the goddamn football game!”

Wearing a knitted hat like his brother, Alex Martick delivered the remark (tweaking the organizers for scheduling the memorial at the same time as the Ravens’ AFC divisional playoff game) very much as his brother would have done it. 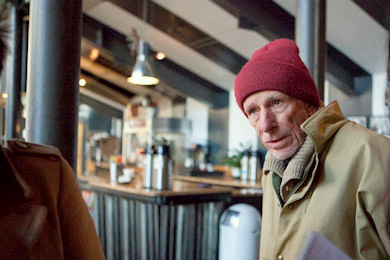 Alex Martick in the lobby of the Charles Theatre. (Photo by Jennifer Bishop)

But the Sunday gathering largely belonged to the former employees of Martick’s Restaurant Francais, who came from as far away as California and Texas to participate in the service for “the boss,” who died of lung cancer on December 15 at 88.

The house was asked: how many here worked for Morris? Half the room raised their hands.

Marveling at the turnout – how many people would travel across the country to pay tribute to their employer? – Alex Martick put it to the audience: “What was it about Martick’s personality” that inspired “this kind of feeling?”

It was hard to explain all that affection to those who didn’t know Morris, because, as the youngest Martick sibling put it, the man could be so gruff and irascible: “When he got nervous and tense – I don’t have to tell the people here – it was out of sight.”

It was the perfect crowd to take up Alex’s challenge.

Tout le monde from Baltimore of a certain era was there: composers like Lorraine Whittlesey, writers of fiction and poetry like Barbara DeCesare, artist and Louie’s Bookstore Cafe owner Jimmy Rouse, and journalists like Brew contributor Rafael Alvarez, Tony Evans of the deceased News-American and Carl Schoettler of the defunct Evening Sun. That’s to name only a few.

Katie Brennan recalled “our lovely farting contests” and being phoned at home by Morris on a Sunday for leaving a salade verte off the check. Several others spoke of the hazards of table C-6 directly underneath a chronically leaky second-floor sink.

Whenever the sink clogged up, the dishwashers would yell down, “C-6 is gonna blow,” Laugen remembered – and patrons seated there (among them, once, Sunday Sun restaurant critic Elizabeth Large) were asked to vacate the table immediately. 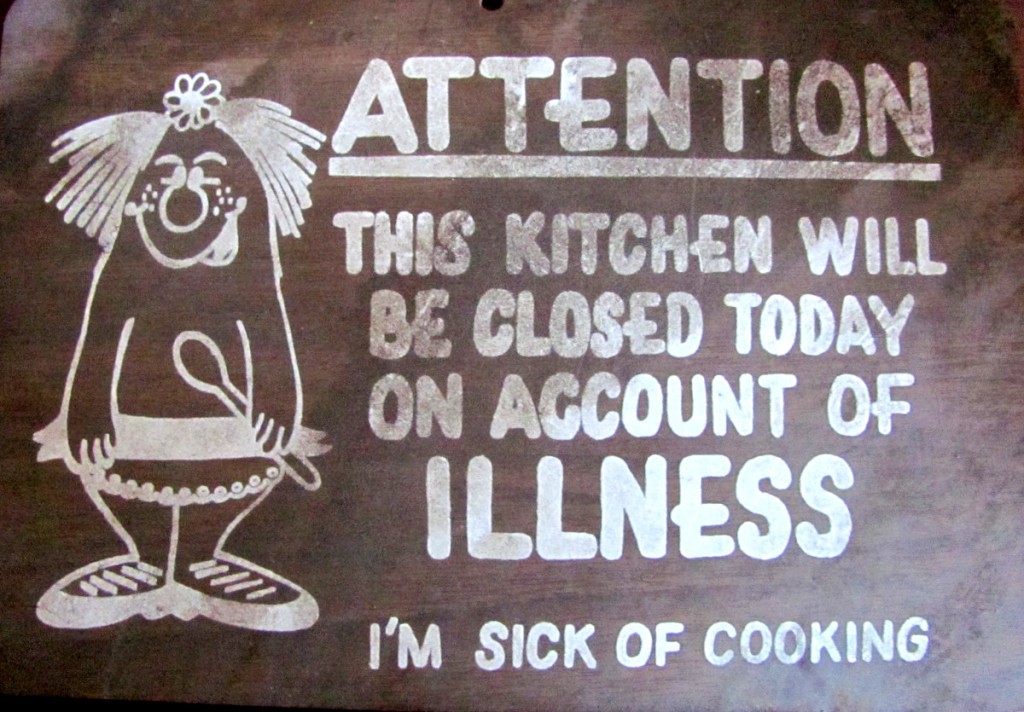 The memory that probably resonated for everyone in the room, though, was Diane Sipple’s description of her first visit to the restaurant.

Its owner, whom she then knew not at all, had appeared at the place where she was staying and asked if she wanted to come work for him. (Martick liked to troll the hostels for potential hirees.)

Sipple had gone alone with him in his van, in the dark and, upon getting out and seeing the decrepit-looking storefront on Mulberry Street, figured, “I’m doomed. I’m never going to see the light of day.”

“Then, the door opened,” she said, “and it was just this magical place.”

One feature of that magic was the literary talk that filled the place, the live jazz in the earliest incarnations of 214 W. Mulberry St. and  the art of John Bannon, Joseph Sheppard, Aaron Sopher Bob Hieronimus and others, who sold many pieces off the the walls where Morris displayed it. Some speakers employed verse for their Martick’s tributes.

“Oh, Mon Dieu! Those mouse turds, too!” Joe Kearns intoned, reading from his composition “Miracle on Mulberry Street.” (One line referenced “the all-seeing behemoth bread lady,” that weird wooden woman-with-a-spoon statue from the restaurant that stood in the Charles Threatre lobby Sunday in all its Easter Island head implacability.)

Bluesman with a Beautiful Soul

Others turned to music. Ava Oelke sang a sultry Martick tribute song and, in a nod to the python-skin-patterned wallpaper, wore a slinky dress with the same look. She was accompanied by Brian Kooken on guitar.

In a magnificent rich voice (and heroically holding her own over the top of a balky slideshow that suddenly overlapped with her performance), Brenda Trusty sang the beautiful jazz ballad, “Everything Must Change.”

The whole event, complete with technical snafus and a black cat scampering maniacally in front of Alex Martick, seemed an aptly antic performance piece in itself. 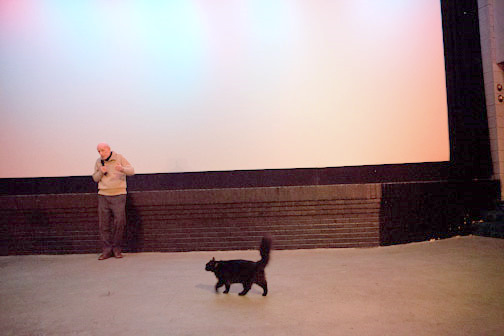 Alex Martick and the black cat who joined him Sunday. (Photo by Jennifer Bishop)

For arts-centric people, “there was only one place to go in Baltimore if you wanted to get a little bit of New York,” Bob Hieronimus told the audience, recalling before the memorial that Martick’s old bar was “where we could get real criticism.”

Perhaps Teddy Dickinson said it best: “He was one of those people that just had a young spirit. . . When you were around him, you were bubbly, too. The sun walked beside him.”

Martick’s life, Dickinson said, was “actually very sad,” apparently referring to the fact that he never really left the house where he was born, never married and, by his own account, had periodic bouts of depression.

“He was kind of like a bluesman,” he said. “He made life more fun with his beautiful soul.”

Alex returned to the front of the theater to say, “I did get an answer to my question. Morris let people be themselves and let them shine.” He then pointed out that he had Morris cremated (“Not that I have anything against Sol Levinson”). Morris would have enjoyed it were he not dead. 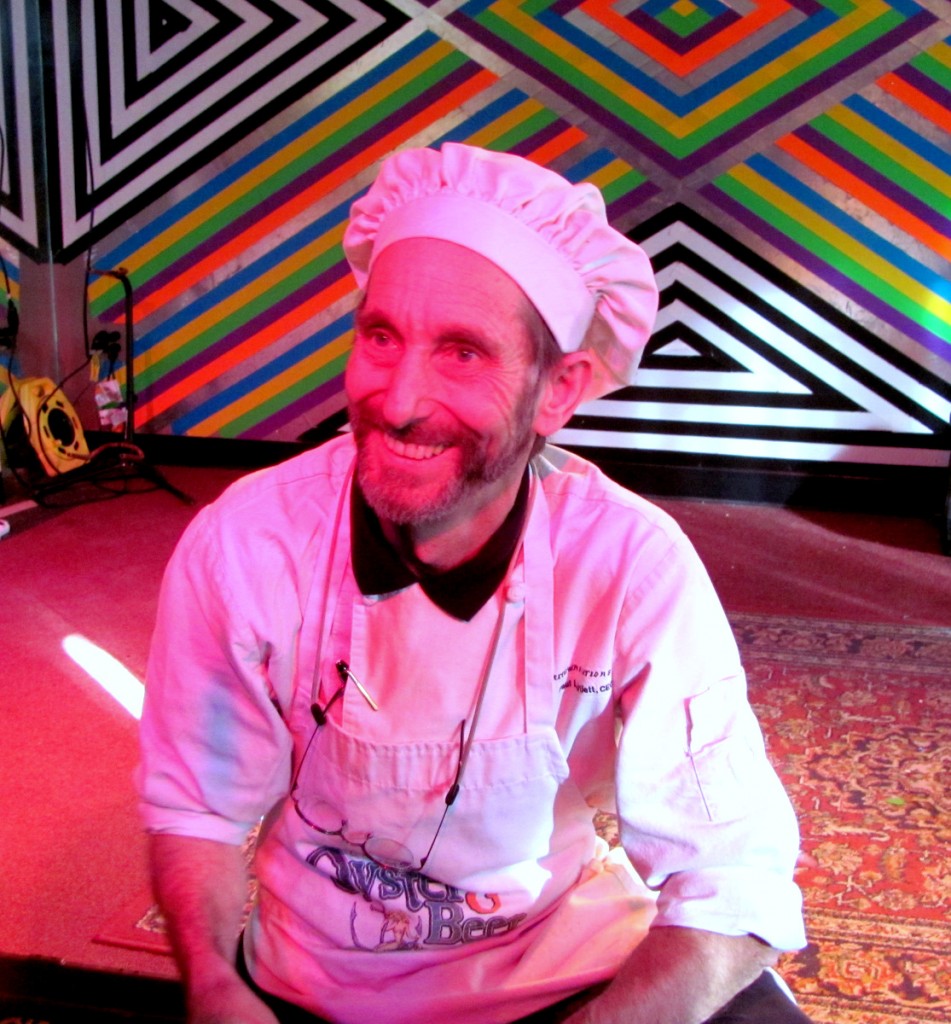 That’s right: no Martick tribute would be complete without food.

The guests filed across Charles Street to the Metro Gallery to partake in a five-course meal of Martick cuisine prepared by chef Paul L. Bartlett.

A longtime sous chef for the restaurant, Bartlett has spent years learning how Martick prepared his famous dishes. “Morris was much more than colorful stories. He ran a restaurant for 40 years, and he was the chef! This was the center of his life,” Bartlett said.

The event was catered by Tom Stuehler, owner of La Fontaine Bleue in Glen Burnie.