There seemed to be two “enemies of the state” yesterday at the Occupy Baltimore protest against a planned juvenile detention center in East Baltimore.

One was the 75 protesters themselves, who were met by dozens of Maryland State Police, Baltimore City Police and SWAT team members in riot gear, armed with guns and batons. They eventually arrested six of the “Schools not Jails” demonstrators and charged them with trespassing after they built a symbolic schoolhouse at the empty lot where the $100 million facility is to be built.

But the other big target was the local news media, scrutinized and sidelined in a more-severe-than-usual way.

“All the media, back behind the perimeter!” Baltimore City Police Detective Kevin Brown shouted to the gaggle of reporters and TV cameramen assembled for the confrontation. 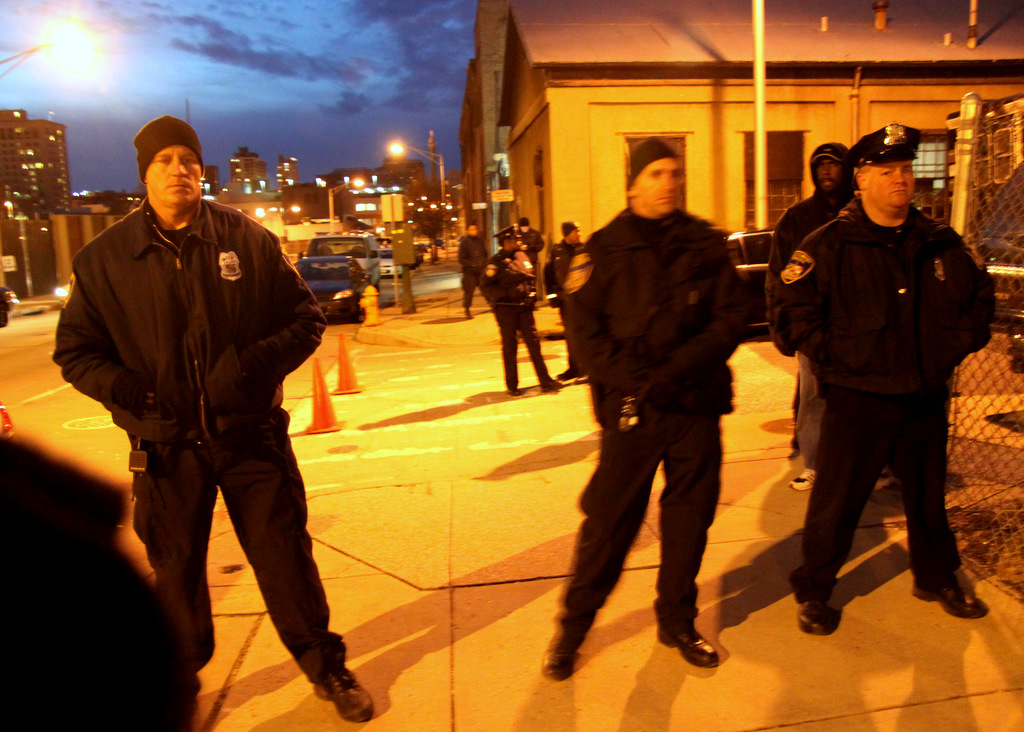 City police keep media far from view of the arrests being made by State Police. (Fern Shen)

A 7 p.m. sweep-through by Brown a phalanx of police pushed the cameras and most reporters back hundreds of yards away, on the other side of Monument St., behind yellow tape. Once they were safely cordoned off to the south, the baton-wielding SWAT team moved in from the north.

About two dozen of them closed in on the crowd of 20 protesters, standing beside the large green tent they had erected on Forrest Street, between Monument and Madison streets. 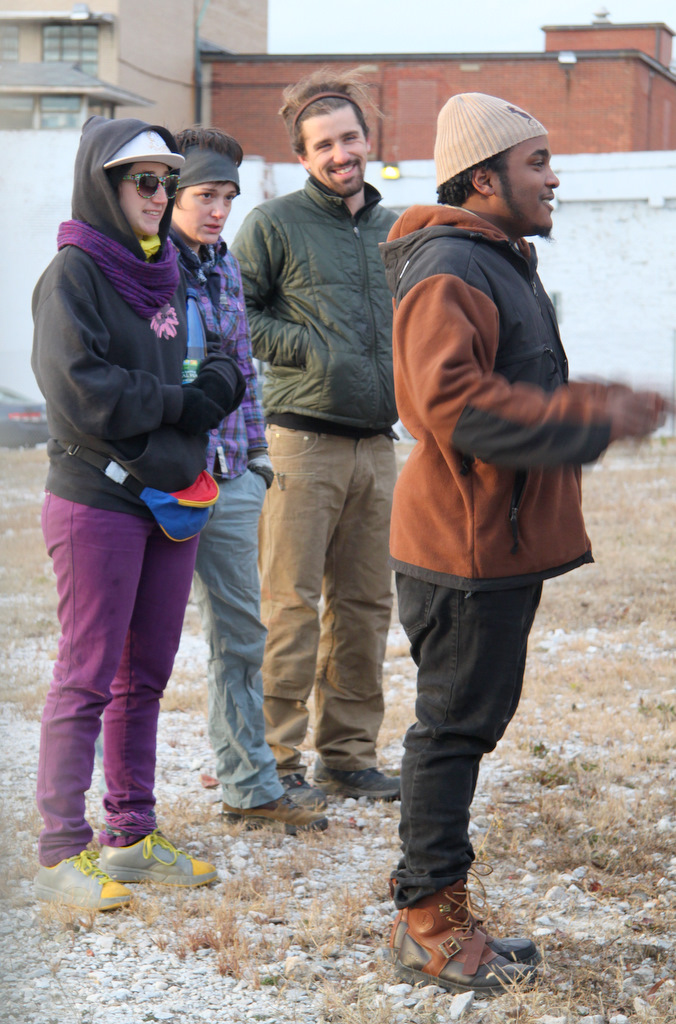 Just inside the chain link fence was the symbolic “Little Red Schoolhouse” that the six arrested protesters had erected hours earlier. A green city garbage truck and a couple of public works employees were poised, as was a city ambulance.

“Money for jobs and education! Not for mass incarceration!” the protesters chanted. Most, braced for arrest, had written their legal advisor’s number on their forearms with a green Sharpie.

Steering clear of the press corral, The Brew remained amid these protesters and watched most of what happened.

Here’s what we saw yesterday, and what happened to those two structures.

The day began with about 200 chanting protesters rallying in front of Central Booking on the Fallsway.

The organizers (the Baltimore Algebra Project, as well as people who had participated in Occupy Baltimore) intended the Martin Luther King Day action as the start of a five-day “pop-up” occupation.

Mimicking the non-violent, civil disobedience protests staged by Dr. King and other black activists in the 1950s and 1960s, they planned to stay in a tent at the site of the proposed jail at 600 E. Monument St.

They would serve breakfast, lunch and dinner, have speakers and teach-ins, talk to the media and call attention to their opposition to the planned 180-bed juvenile detention facility.

In place of the detention center, the protesters have called for increased government spending on Baltimore’s city schools, especially physical improvements to its aging stock of buildings.

They have also called for fully funding Baltimore’s youth recreation centers and held organizational meetings to oppose Mayor Stephanie Rawlings-Blake’s plan to turn some rec centers to private operators, or close them, as a budget-cutting move. 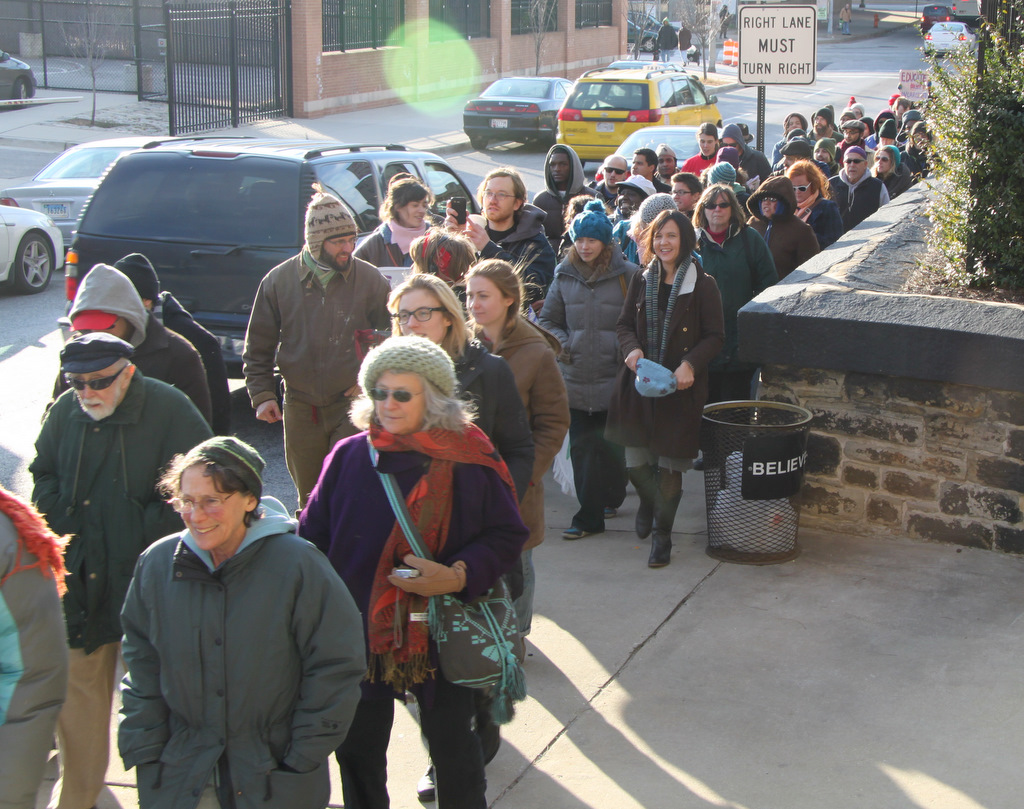 Wendell France, Commissioner of the Division of Pretrial Detention and Services for the Department of Public Safety, told one of the participants yesterday, Kate Khatib, that protesters would not be allowed on detention center site.

“The site itself is not safe,” he said, adding that the sidewalk, by contrast, was “not a problem.”

Khatib said the group might sleep on the sidewalk or at least return there during the day this week to make their point: “Our dream is more schools and less jails. Better priorities for our public funding.” 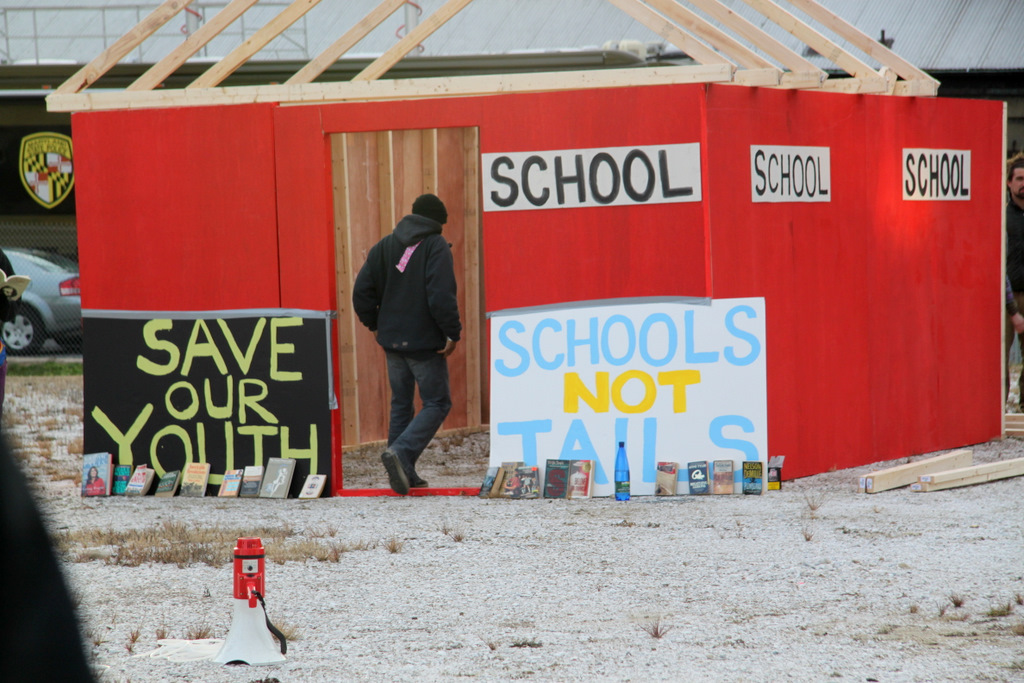 Rally speakers expanded on the point.

“Since the 1970s, our public schools have gradually become more and more prison-like,” said Lester Spence, assistant professor of political science and Africana studies at Johns Hopkins University, addressing the crowd with a bullhorn.

“At my son’s middle school, there’s a police officer in the middle of the school, with a gun, directing traffic – and we now take that as normal,” he said. “It shouldn’t be!”

Members of the Algebra Project, a non-profit that advocates for public education funding and other issues, said high school students tell them they don’t want to commit the kind of crimes that land them in jail, but they have few choices.

“’I don’t have a job,’ they say, ‘but I want a job. I’m on the corner but I don’t want to be,’” said Algebra Project youth organizer Maryland Shaw.

At the large vacant lot, protesters entered through a gap in the chain link fence. Pieces of the schoolhouse structure were rapidly handed over the top of the fence as police looked on. Out came boxes of nails, cordless drills, ladders.

As Mike McGuire, Greg Hill, Nima Shahidi and Taimak Holland assembled the “school,” six or seven state troopers lined up just inside the fence, facing out to the rest of the crowd. Two women, Anne Marie Rush and Iris Kirsch, an English teacher at Heritage High School in Lake Clifton, slipped in, as well, before police closed the gap in the fence with a chain and padlock. 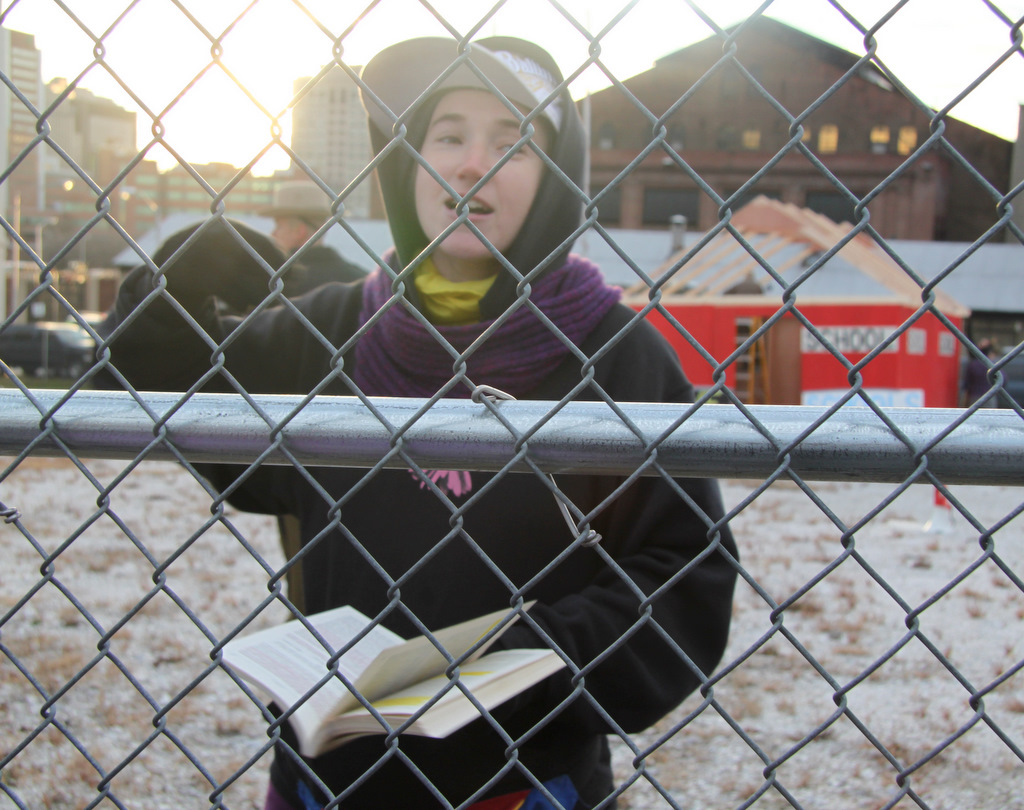 Kirsch led the crowd in a mic-check reading of an excerpt from the autobiography of former Maryland slave, Frederick Douglass.

These were the six people police later carried off the site, as cell phone cameras rolled and protesters chanted “Shame! Shame!” Khatib said the group’s legal counsel confirmed that they had been taken to Central Booking.

While the schoolhouse had been coming together, others were erecting the tent, one of those used at Occupy Baltimore’s McKeldin Square encampment, organizers said. Police came and informed protesters the tent would have to come down. Chris LaVoie replied that some who planned to stay “need it to sleep in.”

The officer, who refused to give his name to the media, said the protesters should take the tent down themselves if they ever wanted to get it back. (One in the crowd recalled that it had cost $800.)

About two hours later, police cleared the TV cameras and marched in.

They separating the crowd from the tent and finally pulled the tent down. It went into city trash trucks. “What’s with all the riot gear? We don’t see a riot here,” the group chanted. 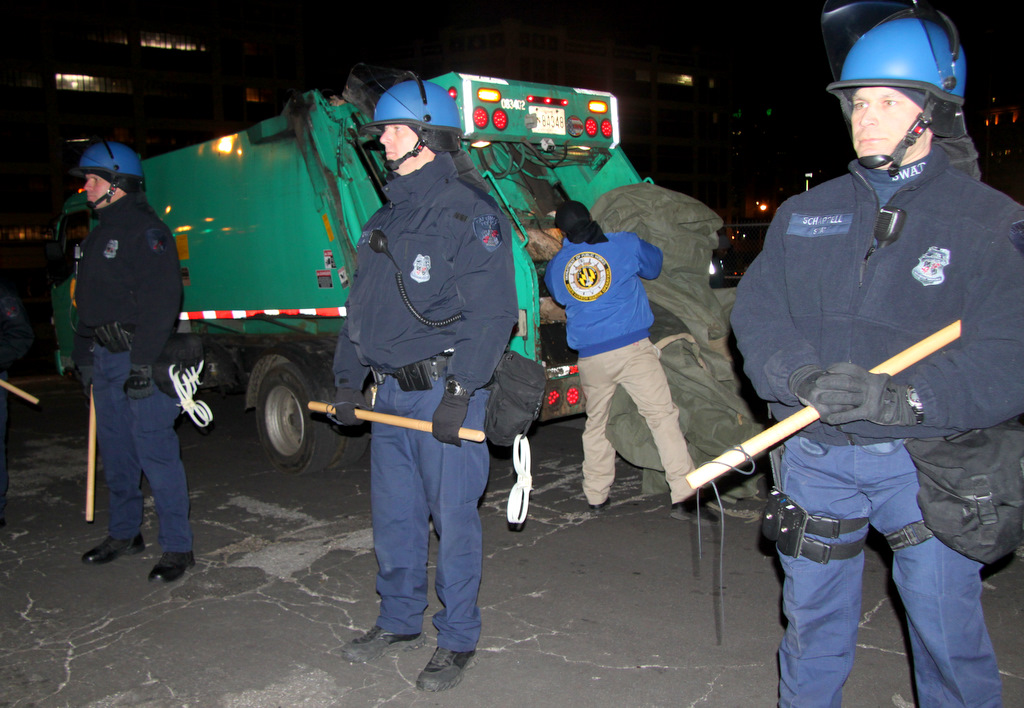 After the tent was gone, Det. Brown, of the the Baltimore City Police, came over and yelled at me to leave: “You’re supposed to be with the other media outside the perimeter.”

Asked why the press had to leave, Brown, said, “I don’t have to tell you that, I just have to escort you over there.”

He warned that I’d be subject to the same treatment “they” were, indicating the protesters but declining to say what that treatment was.

A police officer whose uniform badge said, “A. Brown, Tactical Commander,” was asked the same question. He answered gruffly, “You just go over there!”

After I and many others left, they pulled the schoolhouse down.

Many thanks to IndypendentReader for sticking it out and making this video:

In the gray light of this morning (1/17), we took some shots of the grassy lot, now empty save for three State Police SUVs and one unmarked cruiser. 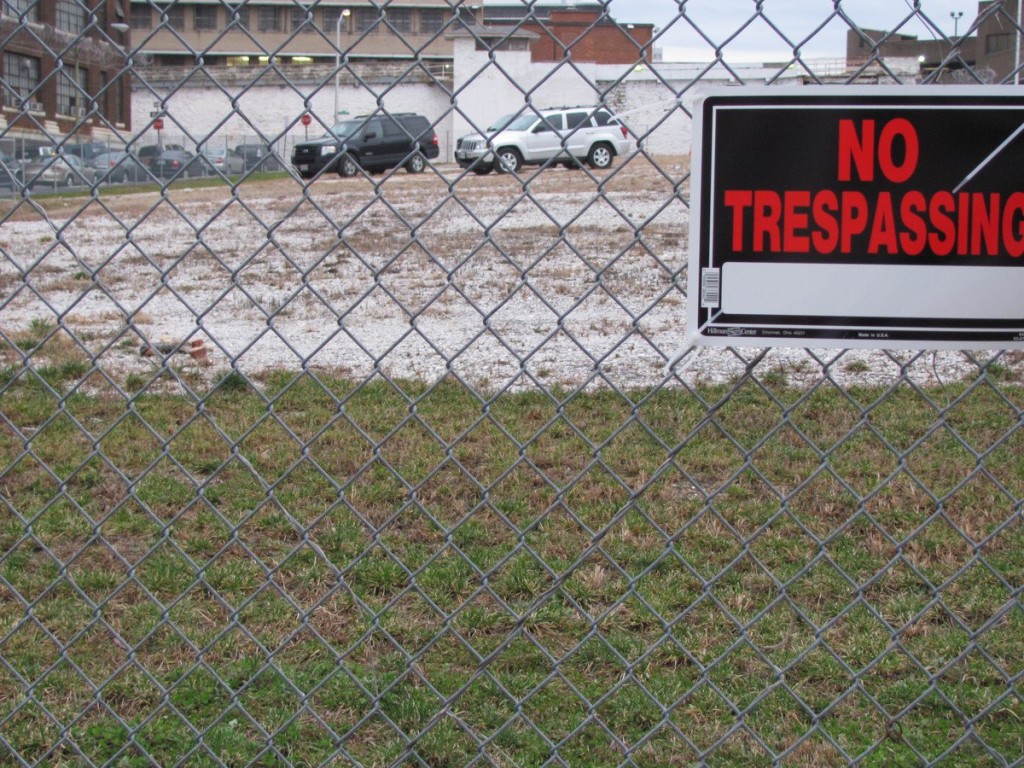 Fresh signs along the Monument St. perimeter of the lot where city workers removed the symbolic “Little Red Schoolhouse” last night. Below, State Trooper SUVs parked inside the lot this morning. (Photo by Mark Reutter) 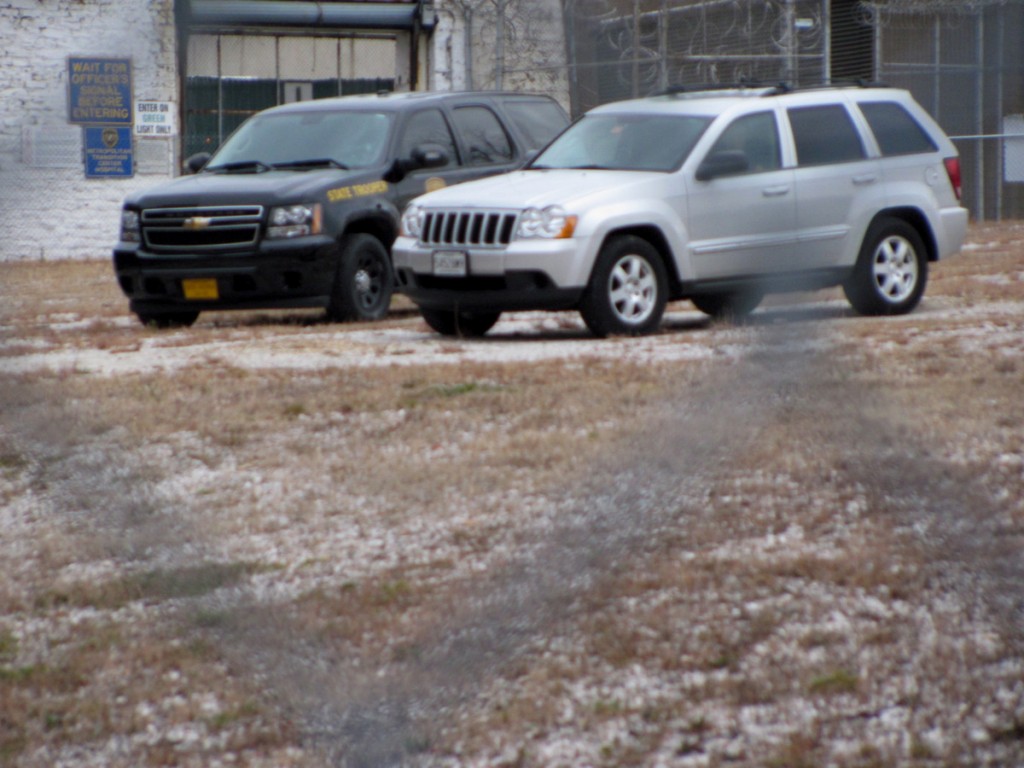 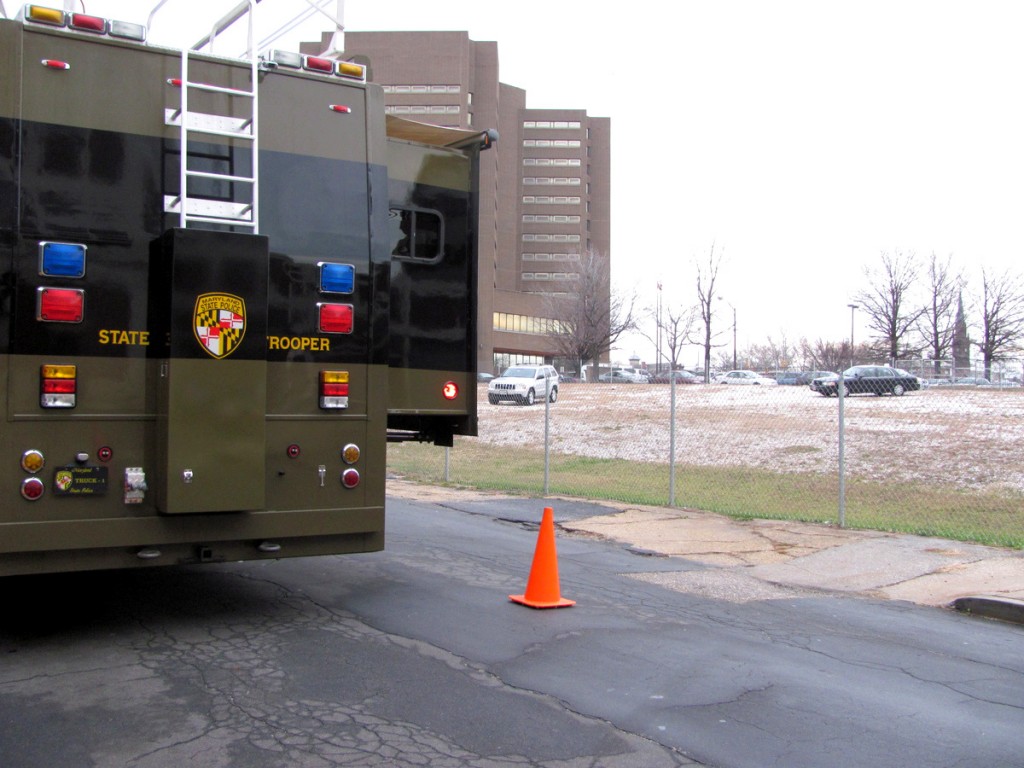 A Maryland Incident Command truck was stationed on Forrest St. alongside the lot this morning. (Photo by Mark Reutter)