Baltimore City Police today threatened to arrest members of a group protesting the privatization of city recreation centers, and then seized the group’s large, wheeled sign, throwing it into a city truck.

The blue-and-red plywood sign said “Rec Center” and “ A Great Place to Grow.” A group of about 25 people advocating more funding for rec centers had been trying to roll the sign along a city sidewalk to a late afternoon “Schools not Jails Recreation Occupation” protest in front of City Hall.

Asked what law the protesters were breaking, city police spokesman Anthony Guglielmi said “the sign was removed because it was blocking the free flow of pedestrian and vehicular traffic.”

Listening to an account of the event, and looking at photographs shot by The Brew, a civil liberties attorney called the explanation the city is offering via Guglielmi  “pure unadulterated horsehockey.”

“It is impossible to imagine anything more clearly protected by the First Amendment,” said David Rocah, staff attorney for the Maryland chapter of the American Civil Liberties Union. “The police action seems spectacularly improper.”

Keeping up a brisk pace, the group had been wheeling the rec center sign on the sidewalk along Holliday Street which (aside from police, protesters, media and a homeless person sleeping in a doorway) was deserted. 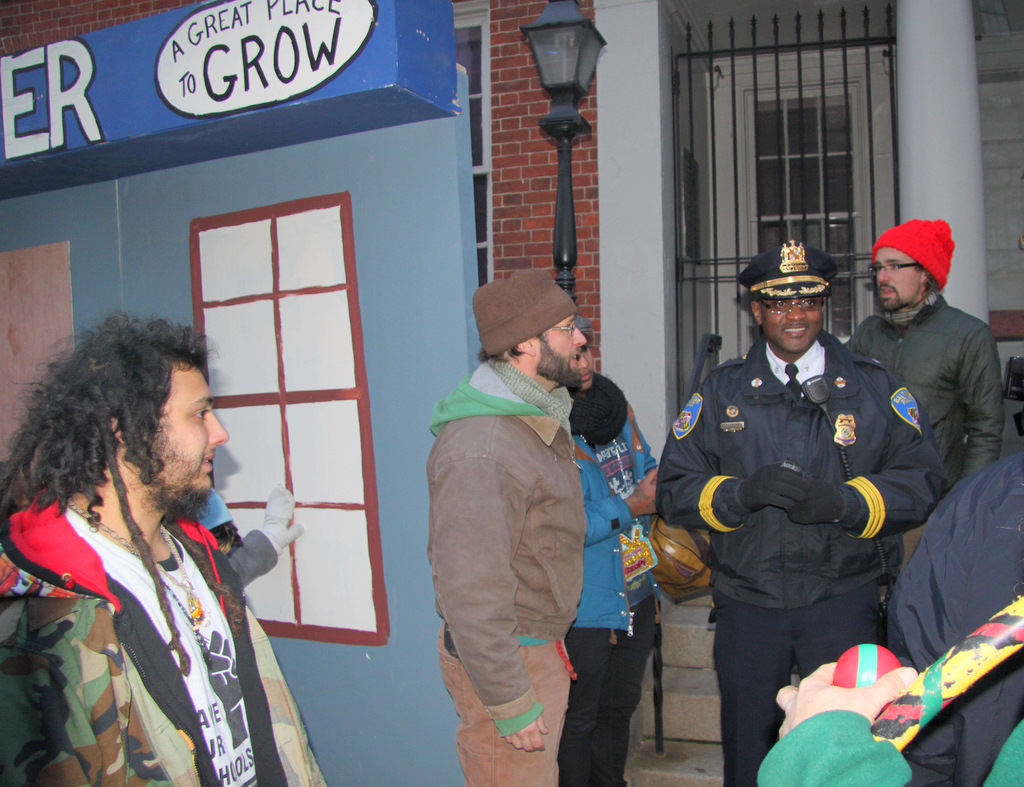 Asked why he was stopped in the sidewalk blocking protesters' way, a smiling Maj. Robert L. Booker Jr. told them it was because he wanted to cross the street. (Photo by Fern Shen)

Less than a block from City Hall, Maj. Robert L. Booker Jr. stopped them. He positioned himself in an especially narrow part of the sidewalk, blocking their way.

“You’re blocking my way,” said Mike McGuire, who had just moments earlier been using a cordless drill to attach the sign to its rolling base.

“I’m not blocking the way, I just want to cross the street,” Booker said, smiling and not making a move to cross. McGuire told him there was a crosswalk at the end of the block but Booker, still smiling, didn’t move. 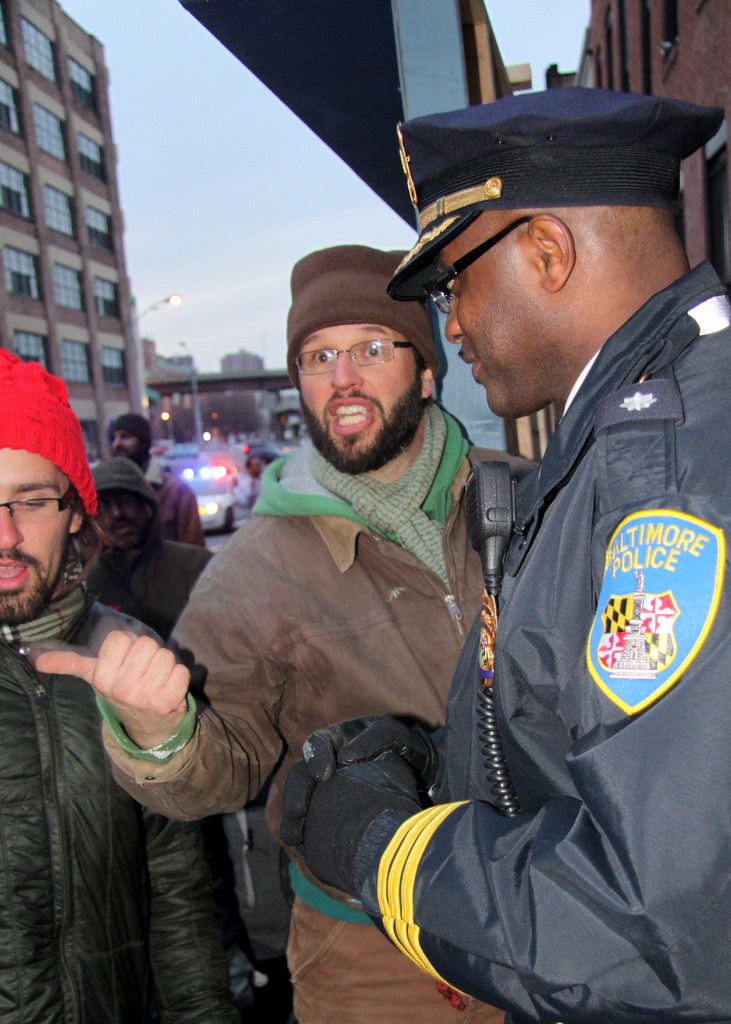 It was pretty clear what was about to happen.

Nearly a dozen armed SWAT team police were closing in from the street – the only place McGuire and the protesters could go if they didn’t want to plow into a completely stationary uniformed Baltimore City Police major.

The two green city trucks were there, at the ready.

Part of Tougher Stance on Occupy

Also present today was city police SWAT team supervisor Maj. Anthony Brown, who presided over a police action Monday in which workers dismantled a small symbolic red school house that the Schools not Jails group and the Algebra Project and Occupy Baltimore members had erected.

The city SWAT team had seized the group’s large tent, throwing it in a city truck along with trash. Maryland State Police arrested six people during that Martin Luther King Day protest, including McGuire, and charged them with trespassing. 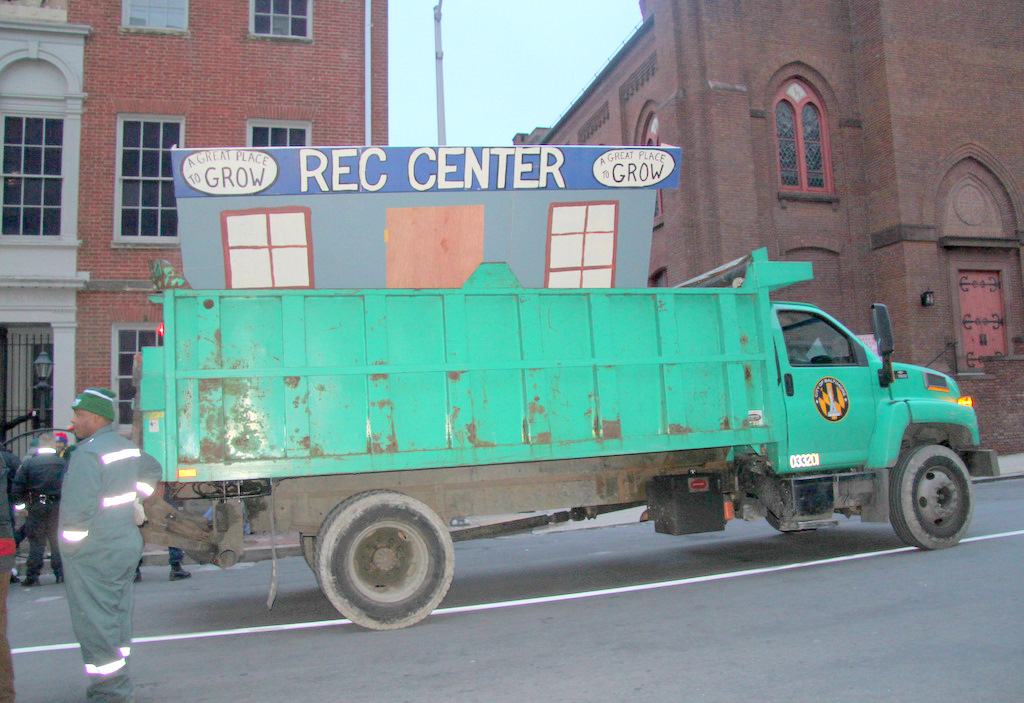 Rec Center sign, after police seized it from protesters, being removed by city workers. (Photo by Fern Shen) he trash.

Mayor Stephanie Rawlings-Blake seems to be acting swiftly now to prevent any form of protest that involves a potentially troublesome structure.)

As they did Monday with their tent, protesters today gave way and allowed police to take their sign. “Secure the structure!” a SWAT team leader said.

(There’s a war of words here. Earlier police had told McGuire that his “structure” was illegal and anyone who assembled it would be arrested. McGuire had replied “It’s not a structure, it’s a sign on wheels.”)

With cameras and camcorders recording the scene, police today threw the mock rec center on top of the heap of garbage in the truck. “Who do you protect? Who do you serve?” protesters chanted at the police. “Boo, Brown! Boo, Brown!”

“Police Should have Arrested Themselves”

McGuire was especially angry afterwards and said he planned to take legal action.

“I had an implement of free speech taken from me, on my way to a protest about the privatization of rec centers and we were on the way to City Hall,” McGuire said, adding that such a setting is “a sacred area of free speech.” 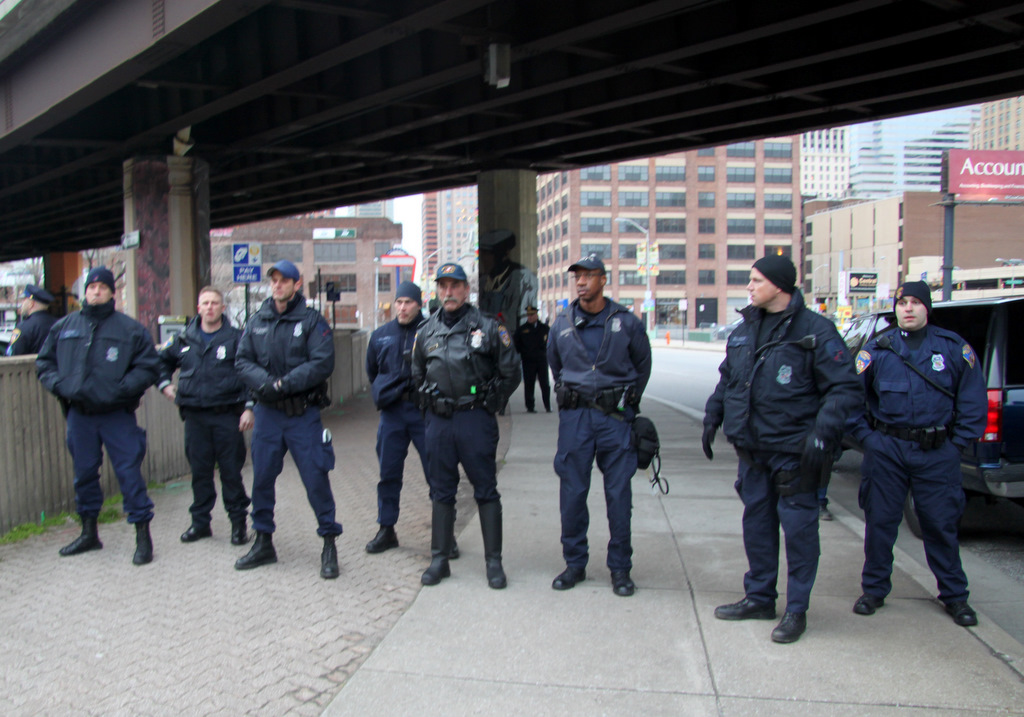 Asked to explain why police were seemingly preventing a legitimate public protest, Guglielmi said, “They have a right to demonstrate as long as they do not pose a threat to public safety.”

Why did Booker block the group from moving forward? At that point, Guglielmi said, they were already blocking pedestrian traffic. How so, if they were moving rapidly? “Because the sign was so large,” he said, “if someone needed to move around it it would be difficult.”

“It was the police that were impeding the traffic flow – perhaps they should have arrested themselves. They were breaking the law,” Rocah said. “People have a right to assemble and protest and there is no requirement to get a permit as long as they are obeying regular traffic regulations and staying on the sidewalk.”

Rocah said “it sounds to me like the Baltimore police trashed the First Amendment in addition to trashing that sign.”

Before the police confrontation, the group managed to accomplish some of its original purpose: to highlight their support for city recreation centers. Some played jump-rope,others enjoyed hula hoops and several tried their hand at juggling.

Saying that many rec centers are underused and in poor condition, the Mayor has said the cash-strapped city must cut $400,000 from the rec center budget and supports a consolidation plan that involves closing some centers and privatizing others.

The PAL [Police Athletic League center] in my neighborhood closed so I went to my grandmother’s house and used the Greenmount rec center,” said Nicole Cheatom, a youth coordinator for the Algebra Project. “I couldn’t believe how bad it was.” She said the roof leaked and there weren’t enough chairs for everyone to sit down.

“I played basketball and when it was raining we’d say, well, let’s go to the rec center,” she recalled. “But you could only play half-court. One side you couldn’t use because the roof leaked on it.”

She said she supports putting money into all the rec centers, not just a consolidated few: “People need these in the communities where they live, not far away where they can’t get to them.” 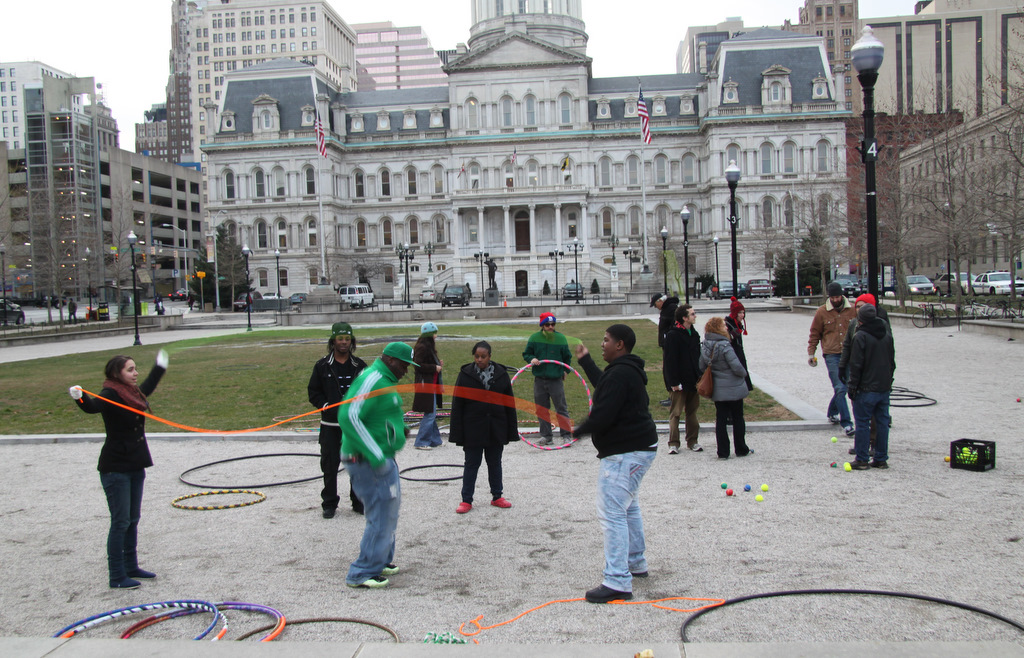 At War Memorial Plaza, jump rope and juggling were meant to highlight the importance of rec centers for city kids to play. (Photo by Fern Shen)