Baltimore may be debating whether the Rawlings-Blake administration should be ordering the removal of the historic carousel that’s been spinning away at the Inner Harbor for 30 years, but one thing is clear:

In other cities, vintage carousels are being lovingly restored, supported through various public and private funding arrangements and used, with their artsy-retro, family-friendly appeal, to attract people back to struggling downtowns.

“It’s a travesty that Baltimore’s got the real thing, and they’re actually purposely getting rid of it,” said National Carousel Association president Bette Largent, of Spokane Washington. “They’ve got an asset. They’re making a big mistake.”

When The Brew reached Largent by phone she was in the midst applying her paintbrush to the carved tiger on Spokane’s 1909 Looff Carrousel (yes they spell it with two r’s), the centerpiece of the city’s Riverfront Park.

“It’s been something to bring people back downtown,” Largent said, explaining that adults seem to be as attracted to the merry-go-round as kids. “We’re like Central Park now, people come from all over for this.” (The tiger, she explained, “always needs care because of the buckles from kids’ shoes.”) 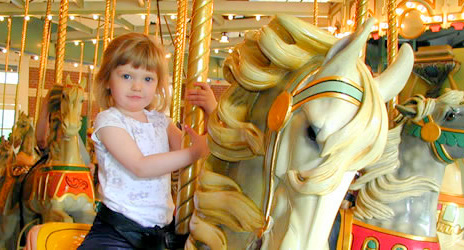 Not just in Spokane, but in Brooklyn, Philadelphia, Coney Island, St. Paul, Hampton, Va. and many other American cities, the focus since the 1980s and especially in recent years has been on restoring and support historic carousels.

Money troubles and fighting for prime land have been problems “for the entire history of carousels,” Largent said, “but we have a lot of historic things in the U.S. that don’t make money, and we preserve them.”

“Carousels are a form of folk art carved very often by immigrant craftsmen, many of whom were classically trained,” Largent said. “People have come to recognize and value that.”

Five Years Behind on Rent

Richard H. Knight and his family have run Baltimore’s carousel since it came to the harbor in 1981, during the Schaefer administration.

As the Baltimore Sun reported this week, city officials have sent a letter to Knight ordering him to remove the 106-year-old Herschel Spillman carousel by Mar. 31, saying “time is of the essence.”

Asked about the tone of urgency, Irene E. Van Sant, director of special projects for the Baltimore Development Corporation (BDC), said the order was not abrupt.

“There have been major concerns about Mr. Knight for many years, by me and my two predecessors,” Van Sant said. “We did not come to this lightly.”

Knight has not paid his rent for five years, hasn’t provided adequate financial statements and wasn’t maintaining the ride “to the standard we want,” Van Sant said. “Have you seen it lately?”

Stacy Daft, Knight’s daughter, acknowledged that they have been struggling with upkeep and haven’t made their payments to the city and blamed declining tourist traffic. “The Harbor is vacant, Phillips moved out, nobody is down here.” 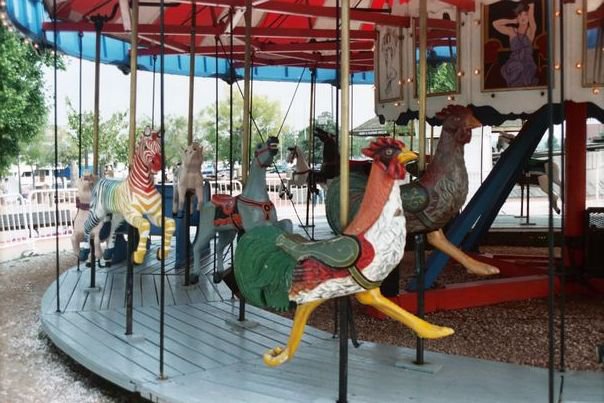 The heroic rooster at Baltimore's carousel in the Inner Harbor. (Photo from Facebook)

She said they have paid their 10 percent city amusement tax but haven’t been able to afford their 12% annual city rent, which has been just over $2,500 lately.

Daft said the BDC letter came as a surprise, since the city hasn’t sent them a letter asking for rent for years. Until the lease terms were renegotiated some years ago, she said, they weren’t required to pay anything if their revenue went below $30,000. “We allowed them to take that [clause] out,” Daft said, “but that was when we were making $100,000, we didn’t think anything of it.”

Somebody Else in Mind?

Daft said the city has stymied them as they to come up with ways to increase revenue, such as fixing up the ticket booth and selling food, or building a structure to house the carousel so they could run it in the winter and use it for birthday parties or other events.

“They’re trying to let it get so bad they can justify kicking us out,” she said. “They just want to get somebody else in here.”

The BDC has been considering flashy new attractions for the Harbor, and has said it is still talking to groups proposing two of them: a British company offering a 200-foot tall Ferris wheel and a Baltimore-area firm with a more complex bid involving a Ferris wheel, as well as bungee trampoline, climbing wall and carousel.

Van Sant said another RFP (Request for Proposals) will probably have to be issued. What would happen to the spot in the meantime, if the merry-go-round were removed? There could be landscaping and benches, Van Sant said, “I don’t think it needs to be an eyesore because there is no carousel there.”

Used as Firewood or Put in the Dump

Elsewhere, cities have taken a number of approaches. In Philadelphia, the refurbished century-old Woodside Park Dentzel Carousel is part of the Please Touch Museum.

Many cities own their carousels and contract with operators to run them. Others depend on non-profits like Our Fair Carousel, Inc., which owns and operates Cafesjian’s Carousel in St. Paul’s Como Park. Many get extra support from “Friends of” groups.

Jane's Carousel in Brooklyn got a high-end makeover from the wealthy developer who bought it. (janescarousel.com)

Spokane has a hybrid approach, with the city owning the carousel, operating it through the Parks and Recreation Department and looking to a foundation to help care for it and coordinate the efforts of eager volunteers.

“One gentleman maintains the sound system,” she said. “He’s done it for 35 years.”

Spokane’s Looff Carrousel has 300,000 riders a year and makes a profit, mostly from the birthday parties and concessions, according to Largent. “There are people who book birthday parties a year in advance,” she said, noting that the ten-sided building enclosing the carousel makes this possible in all weather .

Supporters saved Spokane’s carousel in the 1970s, at a time when many around the country had been dismantled and the horses and other carved wooden animals sold individually at auction. “Some were actually used as firewood or put in the dump,” Largent said.

Of the 5,000 carousels experts believe were created in the U.S., only about 160 remain, she said.

Spurs to Development and Community

Some of these preservation sagas have unfolded fairly recently, such as the two carousels in New York tied to redevelopment efforts.

She and her developer husband, David Walentas, bought the carousel for $385,000 as part of his plan to remake the DUMBO waterfront. (He spent $3.5 million to finish the park where the carousel sits.)

At night, when the carousel is closed, images of the horses will be projected against white shades within the pavilion, making it like “a magic lantern,” French architect Jean Nouvel told the New York Times.

In Coney Island, meanwhile, the century-old B&B Carousel set to open in 2013, is part of a redevelopment project called Steeplechase Plaza. The last of Coney Island’s historic carousels, it was going to be dismantled and auctioned off until the city stepped in and in 2005 bought it for $1.8 million. The carousel will be placed in a glass-doored, two-story pavilion in a $29.5 million plaza.

“This new open space…will serve as an important link to Coney Island’s past, and a symbol of its bright future,” city Economic Development Corp. President Seth Pinsky told the New York Daily News.

In Albany, meanwhile, a grant-funded group, the Albany Brass Ring, is working with a 1909 Dentzel carousel mechanism and involving the community in a years-long project to carve brand new animals. They’ve got more than 54 so far, according to the website.

They offer opportunities to “sponsor” animals and other features and have enlisted volunteer carvers, painters, sanders and others to help with the endeavor.

“Interested in painting, come in and meet the lead painter, Gwenn Marchese and her crew of dedicated painters,” the website says. “Catch the community spirit and become a part of Albany’s heritage.”

Now Baltimore’s carousel is the subject of its own Save the Carousel effort.