Sardinian pasta and pastry on The Avenue? Word-of-mouth reached me that I should check out Daniela’s, the shop Daniela Useli opened about nine months ago in a tiny rowhouse in the North Baltimore neighborhood of Hampden, on 36th Street, just off Elm Street.

Useli has made pasta for Sotto Sopra and, nearby, for Grano, and had wanted her own shop for some time. When Eye Candy vacated the space, Daniela made it her own.

I talked to Daniela a bit recently about Cagliari in Sardinia, where she lived until moving to Baltimore 12 years ago. She explained that they were a big family, five brothers and a sister. Her husband also has many siblings as well as nieces and nephews, aunts and uncles and . . . well you get the idea. Sometimes she would cook dinner for 60 people and loved it. 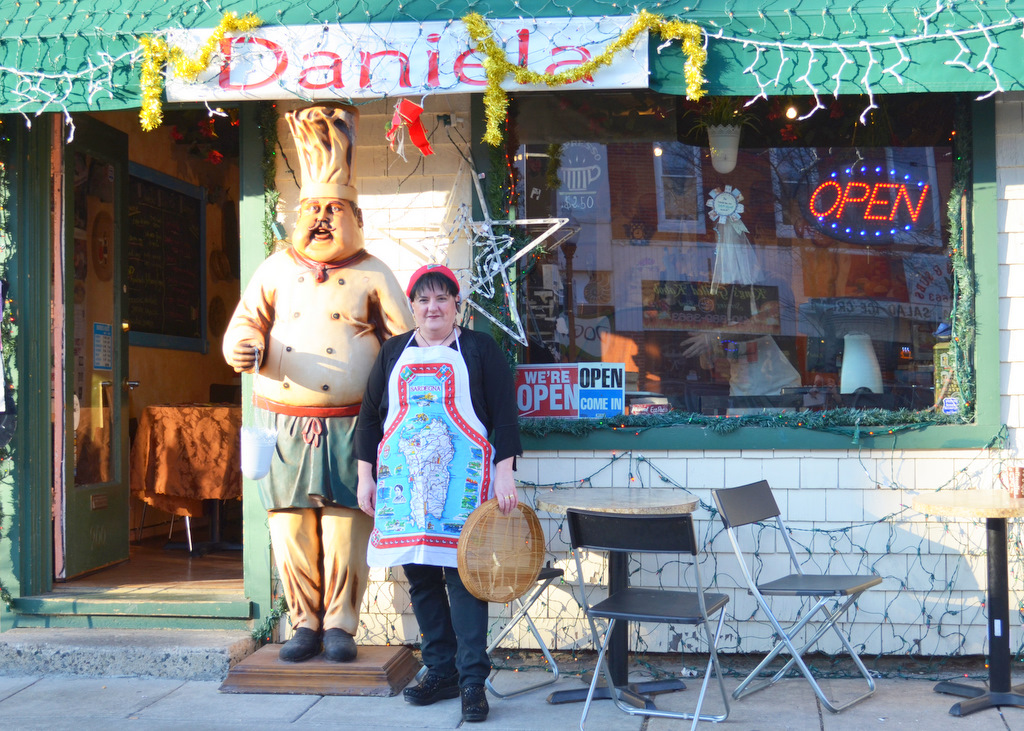 Visiting her far-flung family, Daniela has traveled and cooked in many parts of Italy, but until moving here, Cagliari had been her home. When I asked what brought her family to Baltimore, she explained that her husband is a scientist at NIDA (National Institute on Drug Abuse) at Bayview. A real Baltimore story.

At a time when shops making only meatballs are becoming popular elsewhere, Daniela’s baseball-sized meatballs in a thick tomato sauce would hold there own anywhere.

Because I don’t own a microwave, I placed the meatballs in a shallow ceramic baking pan in a 275-degree oven and got them nice and hot. I ate them topped with a bit of shredded Parmesan cheese, a salad and some crusty bread with an olive oil dip. Easy and tasty.

The pastry, for which she is known, exceeded the raves reviews that had reached me. The clamshell-shaped sfogliatelle (layers of phyllo-like pastry ribbons wrapped around a sweet, custardy ricotta cheese filling with bits of glazed orange rind and a “secret ingredient”) are exceptional – the best I have had in the city. 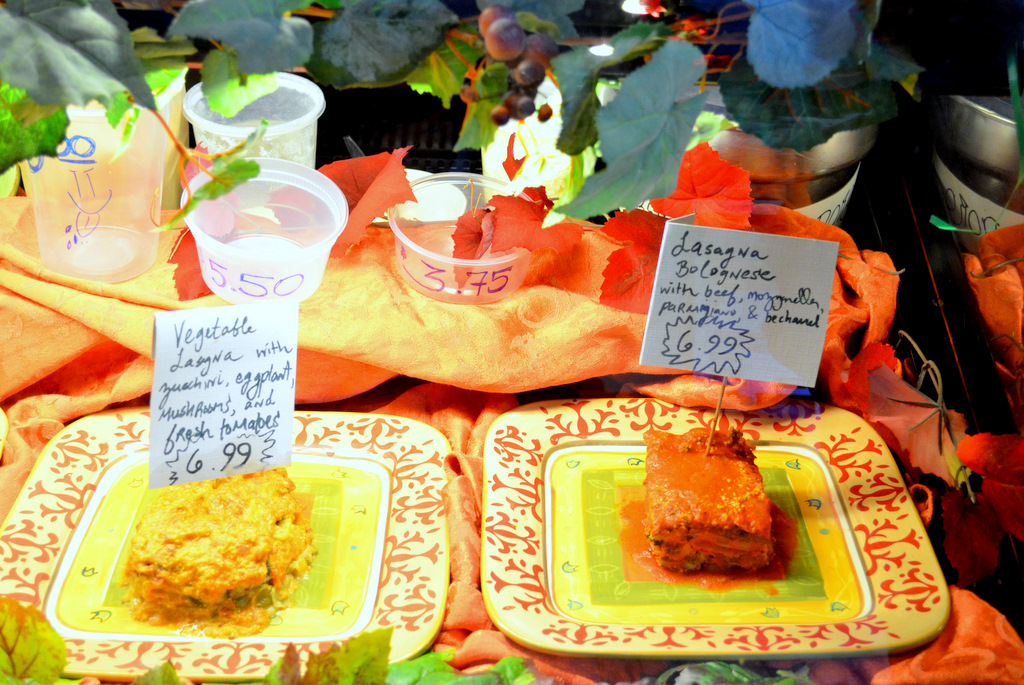 I also dare anyone not to return for the tiramisu. A frequently ordinary dessert on many menus, here it is a cloud of melt-in-your-mouth flavors that are truly memorable.

The two dishes I want to try next are the crabmeat ravioli and the fregola, a couscous-like dish that Arab sailors brought to the island ages ago.

The fregola is made by mixing semolina, water and local saffron in a bowl and then rubbing it through the bottom of a loosely woven basket, of a type that has been made and used in Sardinia for hundreds of years.

Many of Daniela’s recipes are inherited from grandmothers and great-grandmothers. The portions are generous and will serve one with leftovers, or two if you are combining.

When I met with Daniela the other day she had arranged for Nancy Scheinman, a Baltimore artist and friend, to be there. Scheinman painted the colorful and space-expanding mural on the rear wall from sketches and photographs she made when she visited Daniela in Cagliari. 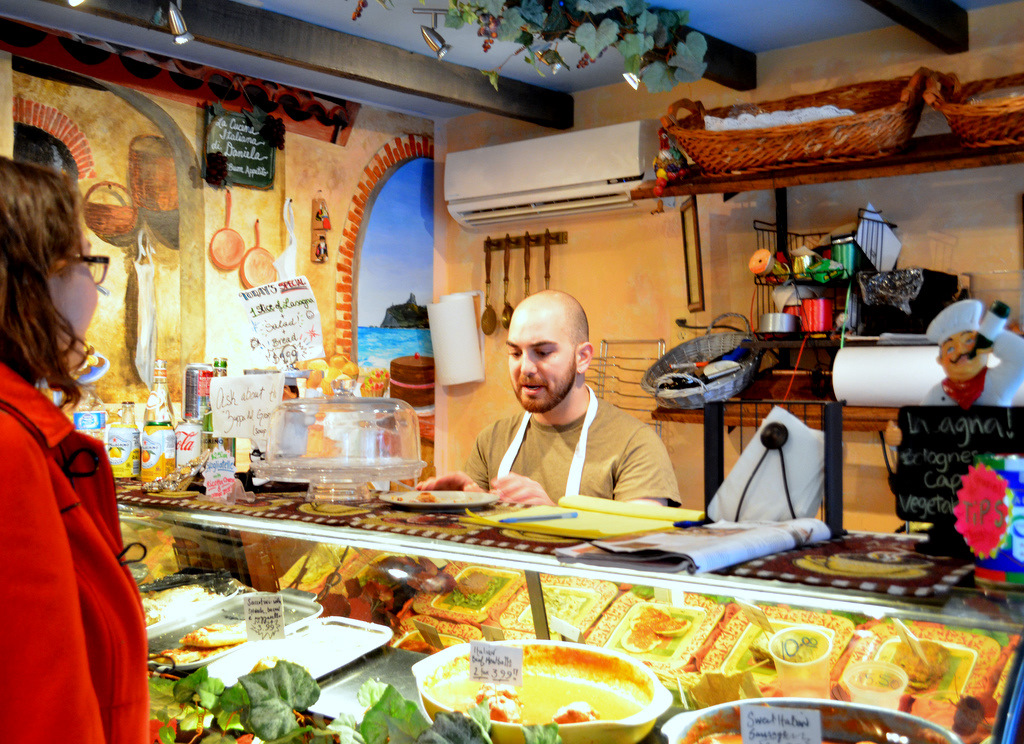 Joey Salvatore behind the counter at Daniela's. (Photo by Francine Halvorsen)

The first person I met behind the counter was Joey Salvatore, self-described as Daniela’s apprentice and translator. A few minutes later Daniela’s oldest son, Stefano, came in carrying a tray of miniature palmieri, crisp pastry rounds, sandwiching sweet chocolate cream. They are the go-to folks at most of the time. Daniela is usually upstairs in the kitchen.

Daniela’s is really a carryout place, but there are two small tables inside, frequently occupied, and on nice days 2 outside as well. In the summer there may be a few more outdoor tables alongside the building. And, keep your fingers crossed, real gelato.

Daniela’s is expecting to have a website up and running very soon. We will post it here when they do.

Until then, just come in and check out the low-tech chalkboards or the equivalent they have inside and out. Buon appetito!