To grow the city, Baltimore should reduce its “prohibitively high” property tax rate and stop giving tax breaks to lure new development, says the city’s biggest and most successful developer.

“No subsidies, no breaks, an equal playing field for everybody, but have the tax rate be similar to what it is in the surrounding counties” is the prescription of Michael S. Beatty, whose Harbor East Development Group received $9.4 million in payment in lieu of taxes, or PILOT, tax breaks from the city last year.

While many businessmen privately complain that the city’s tax rate of $2.268 per $100 valuation – double that of Baltimore County and 149% higher than Anne Arundel County – discourages new investment, Beatty is willing to go on record because lowering the tax rate is “really the only long-term solution” to the city’s economic woes.

His comments are significant because the $1-billion Harbor East project has been acclaimed as a commercial success that has lured both upscale businesses and residents into a once derelict section of the waterfront. Last month, his group won a coveted opportunity to build the $120 million regional headquarters of Exelon Corp. on the site of the former Allied Chemical factory.

How to Encourage Investment

Beatty has been president of the development group, owned by H&S Bakery mogul John Paterakis, since 1993. In a wide-ranging interview, the 46-year-old New York native said, “Are there other challenges facing the city? Absolutely. There are real challenges in the school system, for example. But I strongly believe that if the tax rate was cut, what you will see is a major investment back into the city.”

Without the PILOT breaks given to Harbor East, the Legg Mason Tower and Baltimore Marriott Waterfront would not have been built “because the [city’s] tax rate is prohibitive,” Beatty asserted.

But, he added, PILOTs and the Enterprise Zone tax credit (which wipes out 80% of property taxes for the first five years of development) are not the most efficient means to spur overall investment in Baltimore.

“Look around downtown. There are a bunch of good sites with approved PILOTS that aren’t developed. About 40% of the land in the city is entitled to enterprise tax credits. But you don’t see much [development] there.

“Why? Because it’s very challenging building in the city. It takes huge capital, huge risks. And if there’s no reward at the end of the day, people won’t invest. I think this gets misunderstood.” (Harbor East has been picketed by a citizen group saying it is not paying its fair share of taxes.)

City Neighborhoods Would Benefit Most

Beatty said the chief beneficiary of a property tax reduction would not be developers like himself and Paterakis, but homeowners and neighborhoods. Especially in city communities bordering Baltimore and Anne Arundel counties, the current rate structure suppresses property values and discourages investment.

Lower the tax rate, Beatty said, and those properties would become more valuable. “The assessments of those neighborhoods will go up right away. You go to Roland Park and the properties [are valued] at a lower rate than the same houses right across the line. Reduce the tax rate, and the value will go up. People will invest more. The city will get more revenue.”

She has been equally dismissive of a similar tax plan by City Councilman Carl Stokes, chair of the Council’s taxation committee, saying it would force a doomsday reduction of basic city services such as fire and police protection.

She points out the city is facing a $52-million budget shortfall in the upcoming fiscal year. 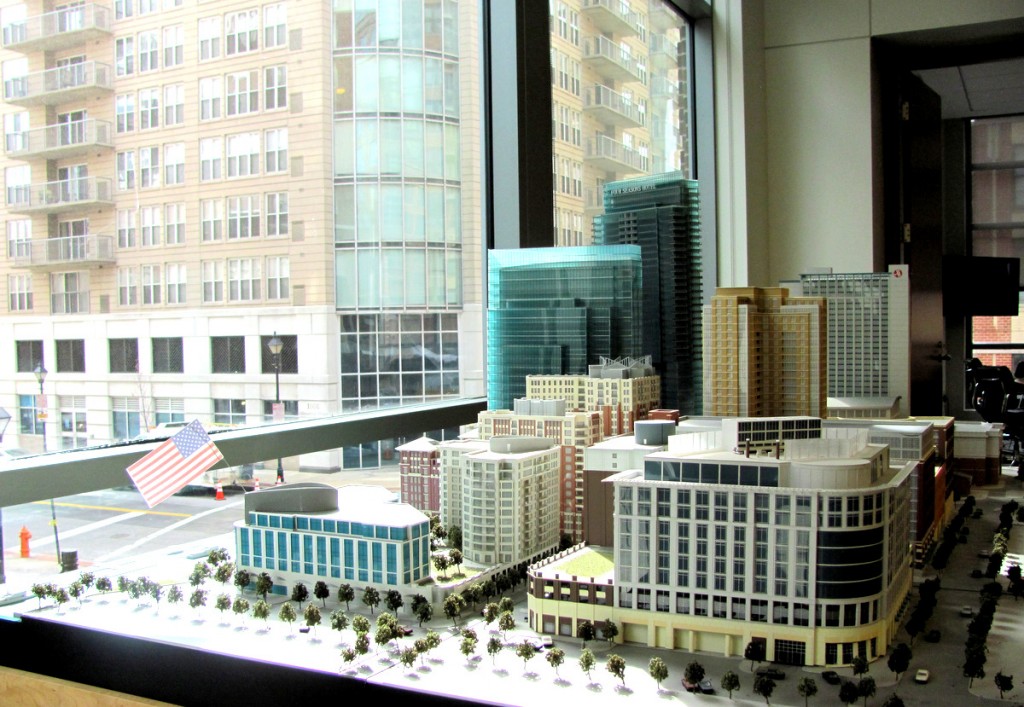 Scale model of Harbor East with The Promenade apartments in the background. (Photo by Mark Reutter)

Instead, she has proposed a two-cent-a-year (0.08%) reduction in the tax rate over eight years, which would cut property taxes for an owner-occupied home valued at $200,000 by $40 the first year and $400 by 2020. Much of this reduction would be paid for by revenues from a still-unapproved and un-built slots casino.

Asked if halving the tax rate over the space of three or four years would create havoc, Beatty said, “We also have to run the city more efficiently. That is another long-term solution.”

Pressed to be more specific, he said, “The cost of running the city is expensive for what we’re getting out of it.”

Adding an asterisk to his tax ideas, Beatty said that tax increment financing, or TIFs, are essential for major redevelopment projects such as Harbor East and Harbor Point.

Unlike PILOTs, which are essentially a tax forgiveness program, TIFs are targeted to use the increased property taxes gained from a redevelopment project to provide infrastructure for the project.

In the case of Harbor Point, Beatty said, the site is without roads, sewers or other infrastructure. “Time has gone by, and the city hasn’t paid for the improvements and infrastructure that would normally be built by the public sector,” Beatty said.

So in return for a TIF currently valued at $155 million, the Beatty group will build the roads, an underground parking garage and other infrastructure on the site.

Only 11 of the 30 acres are slated for the Exelon headquarters and other buildings; the rest of the site will be used for streets, a central plaza, waterfront promenade and other public spaces.

While he would prefer the city to build the infrastructure, when it can’t afford such expenditures, TIFs are a good investment, Beatty said, because “the city can invest $1 million and get $1 million back.”

Not Focused on Tourism

Beatty said that the Rawlings-Blake administration needs to review other costs of investing in Baltimore, especially parking and energy taxes that have risen sharply to help balance the city’s budget.

Parking in a garage can add as much as $8 per square foot to a downtown development, he said, compared to the costs of a suburban office complex where land for parking is readily available.

While some tenants are willing to pay “a premium” to be located in the central city, “if the overall investment risks in Baltimore were similar to suburbia, it would be easier to attract businesses and build up the tax base.”

Beatty also said that, unlike the Inner Harbor, the Paterakis group has not been focused on tourism. Harbor East was designed to lure suburban residents and businesses to the city based on the premise that providing “a dense, diverse urban environment” was highly attractive and met an unfulfilled need.

Thus, Beatty said, his group has concentrated on “great convenience amenities” at Harbor East, such as a Whole Foods grocery, full-service drug store, dry cleaner and health club, rather than the “entertainment retail” found in the Inner Harbor.

The developer said he’s now on the lookout for a hardware store “because every neighborhood needs a good place to buy a hammer and nails.”