By the time we moved to Tuxedo Park nearly 16 years ago, the silver maple towering over our cedar shake house was already dying in lockstep with several of its contemporaries on our two-block street.

Although the tree completed the pastoral set piece that first drew me to our home, it was hard to love for many reasons. First, it was enormous, but not stately in an “I think that I will never see a poem as lovely as a tree” way.

And, it stood inconveniently between our driveway and front walkway. Navigating its shallow, bulging roots could be treacherous when toting groceries or garbage cans, particularly in slippery conditions. 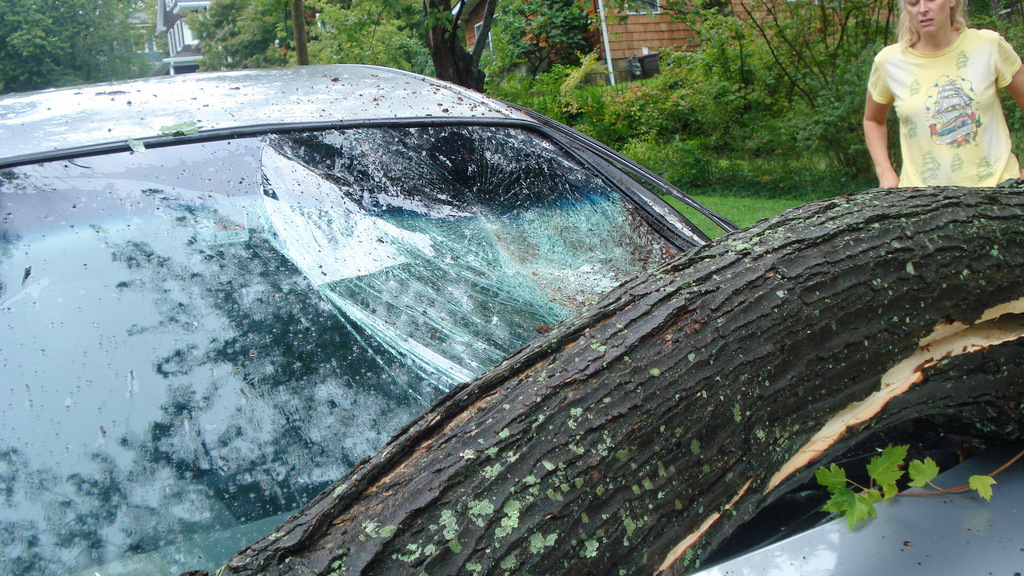 One massive limb that fell in August was enough to total a car. (Photo by Stephanie Shapiro)

What’s more, the tree had been topped off in the past, an arboreal no-no. Its crown destroyed, the tree’s stunted limbs were left open to disease and insects. Over the years, those limbs became disfigured by gaping cavities resembling dugout canoes.

All the same, we loved the tree. It shaded our home and obscured the parking lot across the street. The tree housed a community of brazen raccoons, came alive with hungry squirrels and was visited from time to time by a pileated woodpecker.

Like the tree’s thick roots that strained beneath the yard and threatened to choke our septic system, the tree nestled into our family’s collective consciousness.

Still, it was dangerous. Now and then, a chunk of the tree came down, a reminder that neglect wasn’t always benign. Twice, an arborist and his crew wired loose limbs together, an act of faith in the tree’s overall integrity.

Early last year, the huge silver maple in my neighbor’s front yard gave way with a heaving groan and earth-shaking boom. The tree crumbled a stone wall and strewed tree parts across our adjoining yards. Peering from his window on the block behind us, a young boy saw the tree fall.

We became serious about removing our tree. In high winds, it continued to drop limbs and spindly branches. Several arborists gave us an estimate, including the man who had wired the tree together. But even then, he was loathe to take it down; his love of trees perhaps clouding the truth that our silver maple was a goner. 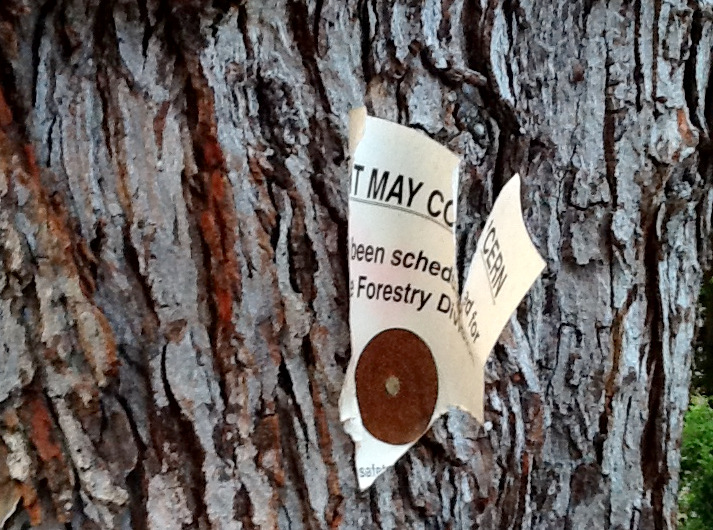 A silver maple marked for execution. (Photo by Stephanie Shapiro)

His hesitation fanned my guilt, nevertheless. Was it premature? Were we acting as a death panel for a tree that yet contained years of life? It still sprouted leaves. It still had a circulation system. Was this murder? Or were we compassionately taking the tree off its own, dwindling life support?

Silver maples are tolerant of urban hardscape and grow fast. Perhaps that’s why the species comprises 12% of the city’s 100,000 street trees, according to the TreeBaltimore website.

But silver maples don’t last forever in cities, typically dying sooner than in rural areas, where they can live up to 130 years. Age estimates for our tree spanned from 40-some to more than 100 years. (That last was the tree lover’s guess.)

Pronounced “Dead” by the City

Last summer, a Baltimore City forestry inspector took a look at the tree (planted on city property), pronounced it dead and slated it for removal. Soon, the town’s precious tree canopy would shrink yet again. 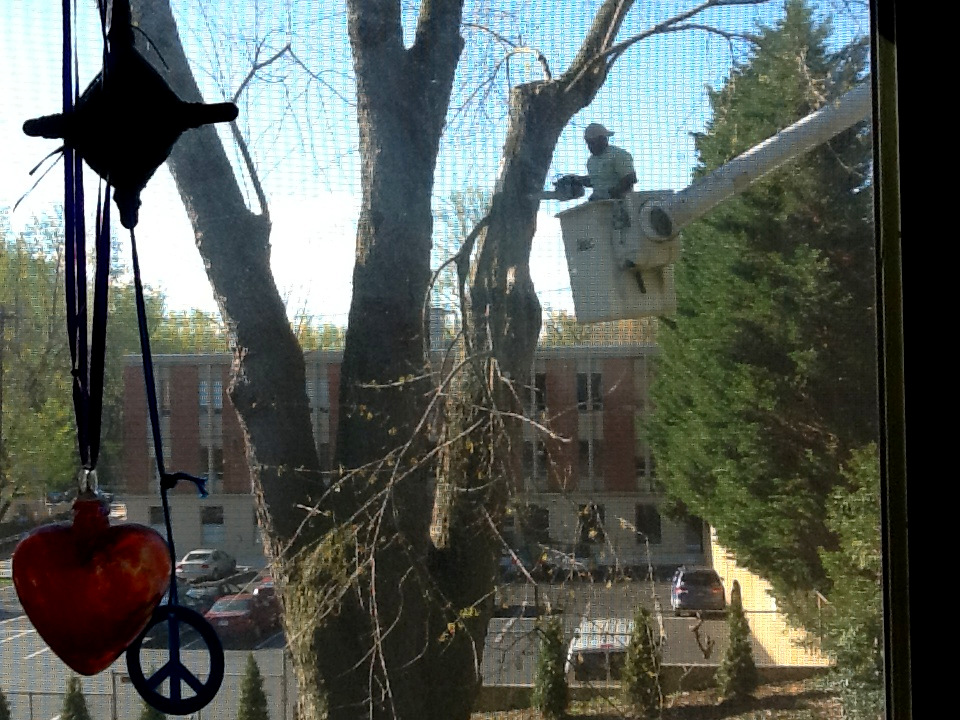 The view from the author's home office window. (Photo by Stephanie Shapiro)

We figured that it would be worth the indefinite wait for an over-stretched city crew to take it down, rather than paying a private company.

After a brief but ferocious storm last August, though, the tree dropped a huge limb on our car, which was totaled. The cost of replacing the car was far more than the estimates we received for removing the tree. So we’ve made do with one car since then; a strange form of penance for trusting fate.

I felt sorry for the tree, but it was time for it to go; especially now that the silver maple next door and the two across the street were gone and could no longer rustle companionably with our failing specimen.

Before they were fed to the chipper, I rescued a couple of relics from the tree, including a gnarled, oval-shaped piece of bark and wood that had framed a knothole; once a home, no doubt, to a raucous and rude family of raccoons. 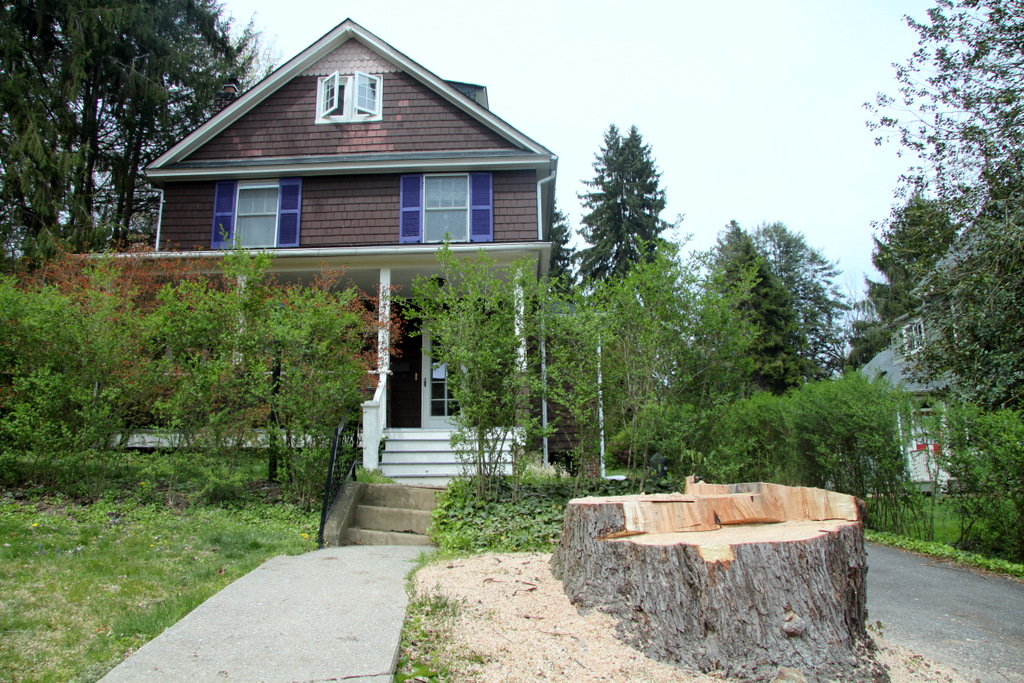 All that remains of the tree that "nestled into our family’s collective consciousness." (Photo by Fern Shen)