Dangling from a tree branch like a fuzzy brown icicle, a swarm of bees attracted a crowd yesterday at Sherwood Gardens in North Baltimore.

People slammed on their brakes, literally and figuratively, and ran over to marvel at the rare sight of thousands of bees away from their hive, clinging to each other.

Another swarm, though, I found even more interesting – the swarm of people (oblivious to the bees) who were picnicking, throwing Frisbees, playing flutes, painting in oil on canvas, holding hands, reading books, sunbathing, playing chess, taking each others’ pictures and tossing balls to their toddlers.

It was “a scene.” And this human scene – perhaps even more than the spectacular tulips and azaleas – gave the place an amazing feel that could be compared to the Luxembourg Gardens of Paris, or any great city park.

Why can’t this happen across the city all the time, not just in a once-a-year, flower-centric flash-mob in one of the city’s highest-priced, most homogeneous residential neighborhoods? 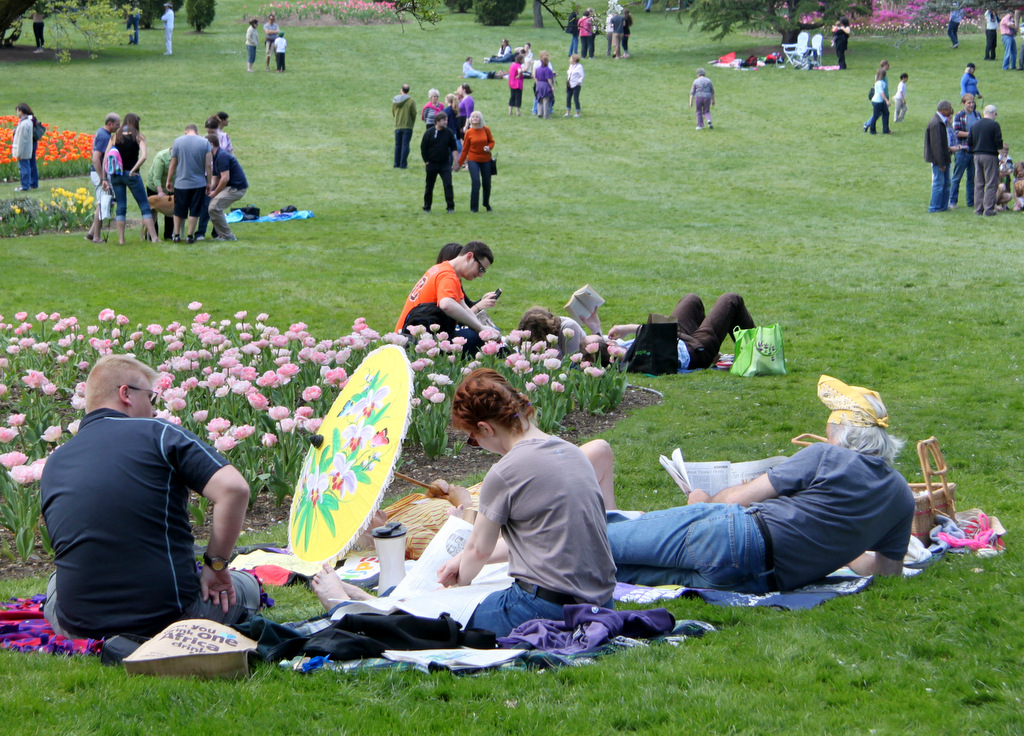 Sherwood Gardens was a see-and-be-seen scene. (Photo by Fern Shen)

We have fine, but neglected, parks that never achieve this busy, buzzing (sorry) critical mass.

Without getting too ponderous about it, I think there’s a lesson here. This six-plus-acre park has no waterfront, no aerial tram nor “Ripley’s Believe It or Not” attraction, not even a monument.

It has just a few simple old-school ingredients.

I called Tom Hobbs, the president of the Guilford Association, to review them.

Sherwood Gardens, Hobbs said, is owned by the residents and managed by the non-profit entity Stratford Green, which maintains the grounds year-round and plants some 80,000 tulips annually.

The annual budget is about $110,000, which comes from residents’ contributions, fund-raising events and direct donations, he said. 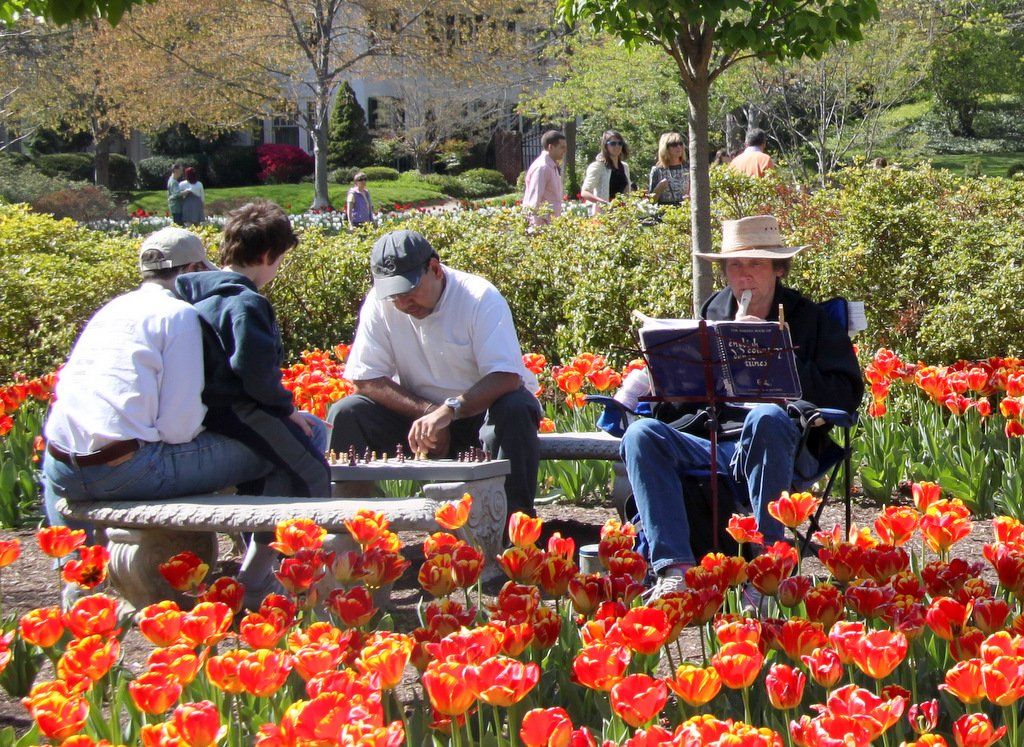 A flute solo, a chess game and many other spontaneous activities had the gardens buzzing yesterday. (Photo by Fern Shen)

(The city stopped contributing public funds during the O’Malley years, amid complaints about subsidies for an affluent part of town when public pools and recreation centers were suffering chronic budget cuts.)

The spring tulip display is always popular, Hobbs said, but visitors also come in the summer months now that the community has begun planting annuals.

As for this year’s visitation by the bees, he attributed it (and, to some degree, the extra big throng of people) to the unusually mild winter and warm spring weather.

“The tulips blossomed two weeks early this year,” he said. “That’s how we ended up having them all come out on Easter.” 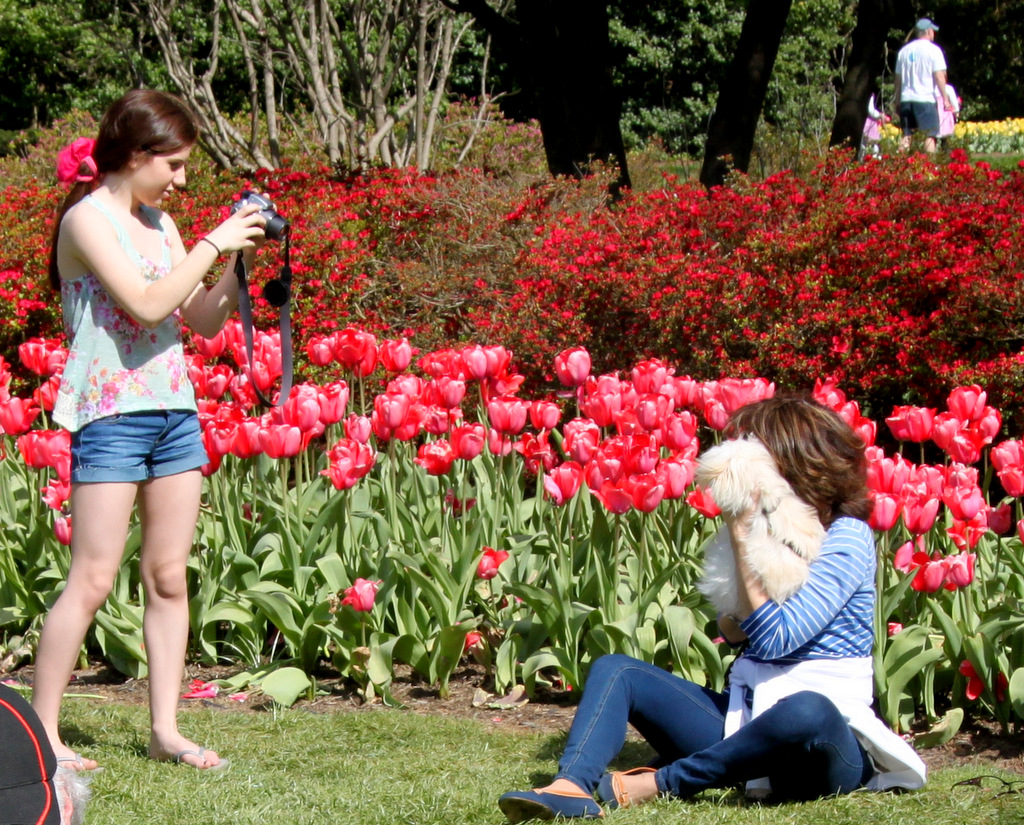 Lots of dogs, lots of snapshots. (Photo by Fern Shen)

Warm weather made the different varieties, which typically bloom at slightly different times, all pop open at once. Hobbs said warm weather is also what brought out early squirrel activity (the critters yanked bulbs out of several beds) and is probably also what triggered the bee swarm.

Led by their queen, usually in the spring, bees will sometimes leave overcrowded nests and fly en masse in search of a new hive location. They’ll clump on a branch for a day or two (as they did on Stratford Road beside the tulips) while scout-bees figure search for a place to build the new hive.

But I was more interested in the trigger for Sherwood Gardens’ amazing human swarm.

“It’s just the mass of blooms,” Hobbs said, “and the beautiful setting.”

That exact setting would be impossible to create at city-owned parks – after all, Sherwood Gardens is surrounded by the shady old mansions on sizable lots in an otherwise cramped city.

Still, what if places like Clifton Park, Harlem Park, Carroll Park and even neighborhood pocket parks got some $110,000-infusions for similar landscaping, tulips and TLC? Couldn’t they get a little of that Jardins du Luxembourg effect? 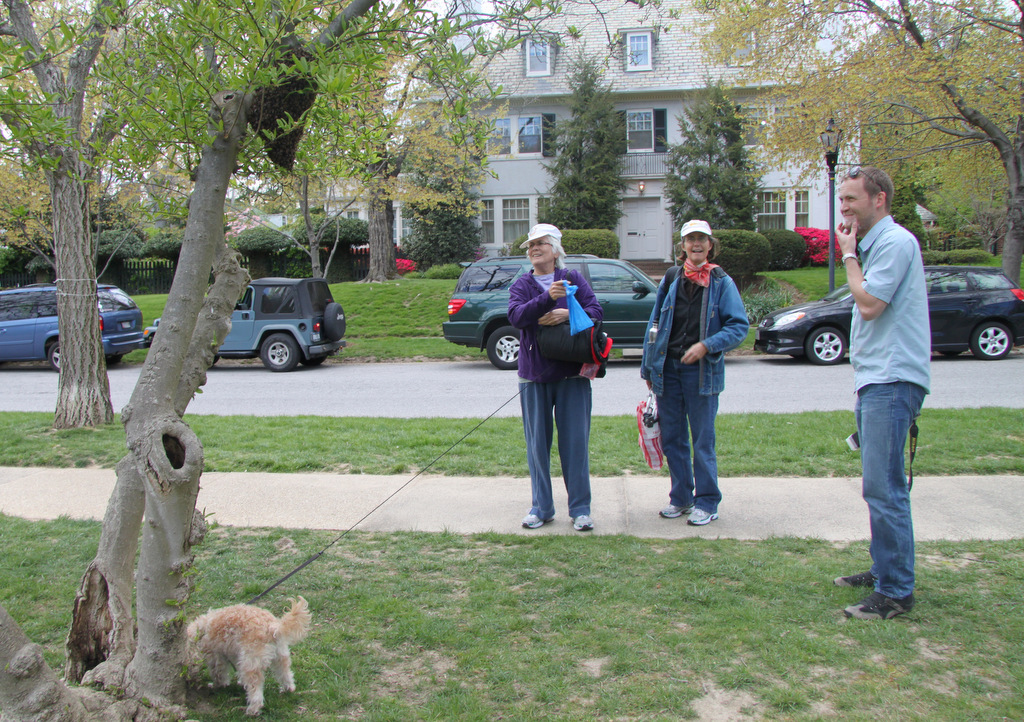 People stopped to marvel at the beard-like clump of bees. (Photo by Fern Shen)

Yes, we all know this is a cash-strapped city.

But amounts like this are piddled away by the city nearly every week through accounting errors, unnecessary consulting contracts and police lawsuits.

Something from these boo-boos and insider deals could be traded out, no?

Think of the 10,000 new families that Mayor Stephanie Rawlings-Blake wants to attract to shrinking Baltimore.

Wouldn’t permanent “scenes” like the one at Sherwood Gardens yesterday persuade some suburbanites and visitors to nest here?

Some of the best-loved and most appealing features of living in Baltimore – its neighborhoods, its farmers’ markets, its community festivals and its parks – have less to do with bricks and mortar and more with beauty and bounty, not the financial kind but the natural and human kind.