Neela Vaswani is a gifted envoy from that nation beyond borders of people with multiple homelands and heritages, citizens of a world where the old categories of race and ethnicity are blurring at the edges.

The New York City writer, who is making an appearance at Baltimore’s CityLit Festival Saturday, has father who is Sindhi-Indian, a mother who is Irish-Catholic and a gift for the sensitive rendering of what she calls the world of the “in between,” where cultural and racial categories are smudged, shuffled and deliberately resisted.

In an age when Barack Obama is president of the United States and many families cross racial divides, her work has certainly struck a nerve.

The publication of Vaswani’s autobiographical, semi-fictional “You Have Given Me a Country” by a small literary press has drawn a wide audience and won a series of prizes, including the 2011 American Book Award.

All of which came as a surprise, Vaswani said. “I had never in my wildest dreams thought the American book award would even notice the book,” she said in a telephone interview Friday, while driving from Washington, D.C., to Baltimore for Saturday’s event.

Her life so far seems more diverse than her heritage. She is a modern literary nomad, having served, if that is the word, as Visiting-Writer-in-Residence at more than one hundred institutions, including the Whitney Museum in New York City, Knox College and the Jimenez-Porter Writer’s House at the University of Maryland. 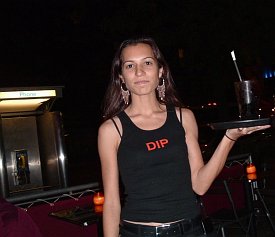 Along the way, she has worked as a maid, secretary, ice cream truck driver, dresser for Armani models, cowpuncher and movie ticket-taker. She paid off her loans from the University of Maryland by working as a cocktail waitress in New York.

In her writing as well, she has moved restlessly from genre to genre, producing short stories, adult and young adult fiction as well as nonfiction.

A Dissertation Reimagined as Fiction

“You Have Given Me a Country” was a literary recasting of her 450-odd page dissertation for her PhD in Cultural Studies at the University of Maryland.  She has called it a “synthesis of styles,” part history, memoir, fiction, ethnography, poem and photograph album.

The book seeks to understand why people feel they need to classify and categorize things and to explore the absurdity of treating people as museum specimens.

“It was a little bit dry and academic,” she told The Brew. “I had to rip out its academic guts and reimagine things. I thought, this won’t change anybody’s mind or move anybody if they read it in this form. I wanted to tell the story of my family in a way that people could feel.”

While events in the book are compressed, recreated from the recollection of her relatives or even reimagined from her viewpoint as a child, she said that everything that she writes about actually happened. More important, perhaps: “Everything is emotionally true.”

Vaswani’s current projects are as diverse as her previous work, and include a screenplay, an adult novel centered around a hospital and a non-fiction piece on the Indian sailors on British clippers ships from the 16th to the 19th centuries.

“They were invisible workforce that changed the face of history a number of times in the British favor.”

The Myth of Purity

Despite the diversity of her work, she has returned again and again to what she calls the “myth of purity,” the reductive impulse to define people by their race or ethnicity. There is something about her writing, too, that doesn’t want to be pinned down, defined as either this or that, although it is exquisitely focused on detail.

In one scene in “You Have Given Me a Country,” Vaswani and her parents arrive at the airport in Calcutta in Christmas, 1980, where they are greeted by her father’s family.  The child is fascinated by the scene, but she resists comparing and contrasting this strange new world with the one she left behind in the United States.

“I lie on my back on the top of the wheeled suitcase and play my favorite game: Unfocus Your Eyes,” she wrote. “Everything goes indistinct, indefinable. No man, no woman, no table, no chair. The world, a soft blur. Swashes of color, flickering shapes.”

Vaswani will appear at the Meyerhoff Children’s Garden in the lower level of the Pratt Central Library at 1 p.m. Saturday, as part of the CityLit Festival, a day-long celebration of the literary arts.

Among the other literary lights scheduled to appear at CityLit are Walter Isaacson, bestselling biographer of Steve Jobs; Benjamin Busch, “Wire” actor, former Marine infantry officer and author of the memoir “Dust to Dust.”

Also appearing will be Jennifer Bodine, author of the latest collection of her father’s images, “Bodine’s City: The Photography of A. Aubrey Bodine,” Nora Pierce, author of the novel “The Insufficiency of Maps,” and poet Derrick Weston Brown.