Lo, as spring awakens Earth from its fitful slumber, the gods and demigods again descend from the mists of their remote mountain fastness to Baltimore’s green and pleasant shores, where these immortals wage war against the fates, engage the forces of darkness and achieve noble victories.

All the while playing incendiary riffs on air guitars.

So it is written and so it shall be.

On Friday May 11, the Baltimore Rock Opera Society will premier its latest original production, Valhella: The Ragnarokkoperetta, another of the group’s torrid tales of superhuman heroism and suffering. The show is loosely adapted from Norse mythology and executed in pursuit of what composer Richard Wagner, the misty godfather of the BROS’ artistic vision, called gesamtkunstwerk – that mashup of spectacle, ritual, dance, music, theater and other artsy stuff that is opera at its most extreme. 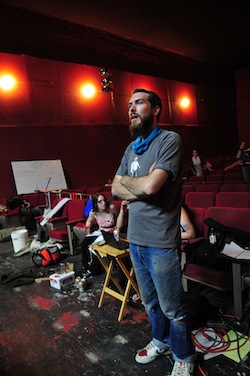 Aran Keating, a founder of the Baltimore Rock Opera Society, directs a "stumble through" of the upcoming production. (Photo by Doug Birch)

Earlier this week, a few dozen of BROS’ mostly twenty-something cast and crew gathered at the Autograph Playhouse on west North Avenue, a former 285-seat neighborhood movie house transformed by a new stage and lots of red paint on the walls, for what theater professionals call a “stumble through” of Valhella.

(The BROS website boasts it will be “the most bowel-releasingest rock theater production to date.”)

Woe be unto him or her, though, who is fooled by the joking tone of such pronouncements. Or by the clowning around, the mugging for visitors or the frequent tossing back of cans of Natty Boh, the opera company’s Official Beer, between scenes.

Beneath multiple layers of irony, the brothers and sisters of Baltimore rock opera seem to harbor some fairly serious artistic ambitions for their high-energy, high-concept productions.

“What’s going to happen is that we’re going to take this on tour to Berlin and Tokyo,” says Dylan Koehler, one of the five founding members of the Society, who is listed on the website as Grand Viceroy of Harmonious Operations but who, like many Society members, has a day job. In his case, as grants writer for an area academic institution.

“And Amsterdam!” a crew member chimes in.

“And Amsterdam,” he echoes, his angular frame awkwardly folded into an Autograph theater seat. “The idea is that we can perfect this craft and the gesamtkunstwerk, as it were. The rock opera and the way we have defined it and we have imaged it is really a powerful art form that is going to connect with a lot of people. It has a lot to offer.” 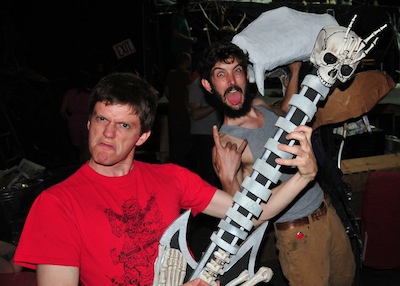 Koehler said his dream is for the group to reach the point where it can operate as a full-time opera company, with its own Baltimore studio, producing an original full-length production each year and taking it on the road.

“It definitely hasn’t happened yet. But it’s getting more and more realistic by the day,” he said. “We’re just getting a lot better at finding the right people and making sure they stay involved.”

Creating the props, elaborate sets, costumes, music and libretto for shows like Valhella – a tale of three demi-gods, all brothers, on a quest in forest full of magical beings – can be a test of artistic skills and physical stamina for the society’s 60-odd volunteers. And those who aren’t willing to work, and work hard, don’t tend to stick around.

“There are lots of people with great ideas,” said Jared Margulies, another founder and a member of the Valhella cast. “There are fewer people who can make those ideas a reality.”

It helps, perhaps, that the society can draw on the growing pool of talented young artists and performers living in Baltimore as a result of the surge in interest in arts education generally and what seems to be an increasing number of area college graduates who decide to stay in the city.

Five friends, Koehler, Margulies, Aran Keating, John DeCampos and Eli Breitburg-Smith – several of whom attended Goucher College – founded the rock opera group in 2007, and spent two years on their first opera, Grundelhammer. By one account, it grew out of an inspirational night of beer drinking while watching Mel Gibson’s film Apocalypto.

Grundelhammer is the story of a boy who sets out to avenge his parent’s death with the help of a guitar master, an extended riff (so to speak) on the Star Wars themes. The October 2009 performance was accessorized with, among other things, a fog machine and live shadow puppet show, and created a cadre of fans.

The libretto was a collaborative effort, Koehler says. “Instead of one person and a glass of whiskey in front of the typewriter, it’s a lot of people with a bottle of whiskey and a computer somewhere nearby,” he says.

Two  years later, in May 2011, the BROS staged a rock opera double header, Amphion and The Terrible Secret of Lunastus, which included a scene where an android character [in this video below] — played by singer-actor Lily W. Susskind, with help from suit builder Chuck Green and sound person Erika Pakota _ performed a haunting melody.

While the first rock opera was the product of BROS brainstorming, the libretto for Valhella was more or less the work of one writer, Jen Tydings, who is also serving as the show’s artistic director. She sat in the front row of the theater near the director, Keating, on Tuesday and used two laptops to cue the music and take notes on the stumble through.

Tydings juggles her work for the opera society with running the Patterson Perk, an Eastern Avenue coffee shop. She has been friends with the founders from the time they were all in college, and joined a few years ago.

One of her aims in writing the script, she said, was to help broaden the opera company’s appeal to women without losing touch with its core audience. “I just don’t want people to pigeonhole us.”

She said the founding BROS have been very supportive. “All those guys are super accepting and if the talent is there and you work hard they’re behind you 100 percent.”

People Who Believe in the Power of Rock

While BROS is still in engaged in its own epic struggle for immortality, it has been producing its stupendous productions on the cheap, budgeted at just $10,000 apiece, which is about what they earn in ticket sales.

They stay within budget, Koehler says, mainly because almost everyone involved is a volunteer. One of the stars of Lunasta was the moonlighting manager of a Whole Foods Market, who donated his time, while all of the costumes for Valhella are being designed by a Maryland Institute College of Art student Naomi Davidoff, working as an intern.

Soprano Vangie Ridgaway, who has sung with other theater groups, appears in the chorus in Valhella. She says she likes the rock opera society because it is so collaborative and all of its works are original.

“The energy is kind of infectious,” she said. “The people who do this love this. You can tell that a lot of devotion went into it. There is a lot of sincerity in it. These are people who believe in the power of rock.”

The society also cuts costs by getting a deal on materials for sets and props. The steel being welded into Valhella’s signature Tree of Life prop was discounted, Koehler said, while a city retailer donated the paint used to turn the Autograph’s walls blood-orange red.

Koehler says the brewers of National Bohemian also kick in cases of beer, although in the course of a production, he adds, BROS volunteers find the need to supplement those supplies frequently.

For other outrageous and intriguing milestones in the annals of Baltimore’s current culture renaissance, consult the Brew’s new Coming at You calendar here.