It’s 9:30 on a recent weekday night, and Robert Curran is standing at Hillen Road near Morgan State University in northeast Baltimore.

A light-emitting diode (LED) bulb has just been installed in the street lamp above us, and Curran is conducting a test.

He stands on the sidewalk directly beneath the lamp pole. “Look at how dark it is,” the 3rd District City Councilman grumbles.

Then he strides down the street. Even before he reaches an identical-looking light pole, he is drenched in a yellowish glare, courtesy of a standard sodium light bulb.

“When you compare these two types of lighting directly, the difference is stark,” he says. (It’s easy to spot which is which: LED lights are white and can be looked at directly, while the halo-like glow of sodium lights makes eye contact difficult.) 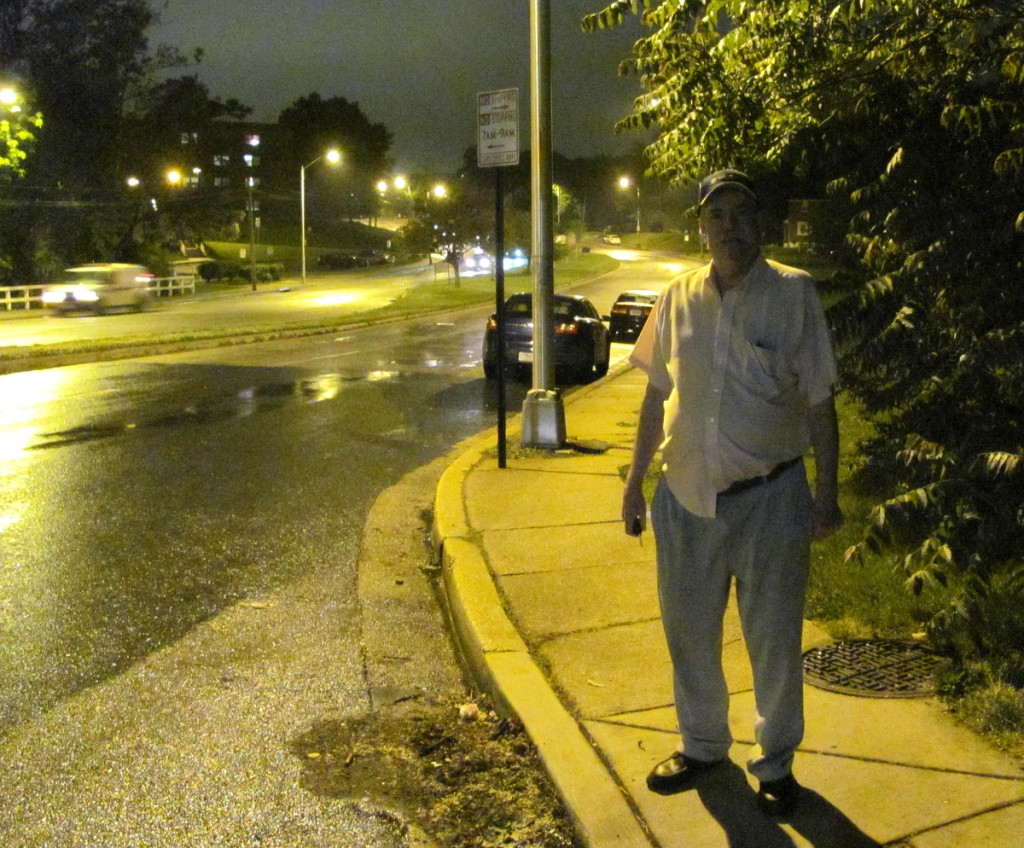 The Baltimore Department of Transportation has embarked on what it calls a concerted effort to retrofit the city’s 80,000 roadway, park and pedestrian lamps with energy-saving LED bulbs.

By this time next year, the agency hopes to have in place more than 15,000 LED lights on major roadways, which it says will save $1.9 million in Baltimore Gas and Electric utility bills and $275,000 in reduced maintenance and overtime for lighting crews.

Baltimore is not alone, it seems. City officials across the country have been stretching tight budgets by cutting down on street lighting costs. Highland Park, Mich., for example, has gone from 1,600 streetlights to 500, prompting complaints they were potentially fostering crime and creating driving hazards. Detroit’s mayor recently announced a plan to upgrade streetlights and reduce the total number in the city by half – an initiative that requires borrowing $160 million for a projected $10 million annual savings.

Besides saving money, Baltimore officials say LED lights are superior to sodium lights. “LED lighting lumens [a measure of visible light output] are typically less than that of sodium lights due to the fact that there is no wasted light with the LEDs,” Kathy Chopper, a city Department of Transportation spokesperson, said in an email.

Sodium lights have long been faulted for their “light trespass” or “light pollution” because their rays shoot off in many directions. They also create “bright spots” that can obstruct vision.

LED technology allows for lighting to be more focused, which for city DOT means illuminating streets and not allowing lumens to spill over into residents’ yards and windows.

Chopper says public feedback about the new lights has so far been favorable.

“DOT has received very few complaints about the [new] lighting. Most concerns are due to the fact that there was a change in the light fixture and that the light looks different. Most citizens just need to be educated on the LED lights.”

This kind of response annoys Curran, who voiced his complaint about the new lighting at a City Council budget hearing recently.

He says the issue isn’t about the new lighting looking different, but that there’s much less of it on sidewalks and streets.

“Public safety includes sidewalks as well as streets. LED lights may be okay for drivers. But where do people get mugged? Not in the middle of the street. They get mugged on sidewalks,” he says.

Curran said he noticed the difference of illumination driving one night along Belvedere Avenue. One block of sidewalks was illuminated, while the next block looked like the overhead lamps were out of service.

The illuminated block had sodium lights, while the darker block was equipped with LED bulbs. “Either the output of the LED lights is too low or the city needs to install more street lamps,” he says.

Our inspection of LED lights along Hillen Road and Cold Spring Lane revealed that the new LED lights were adequate when free from any interference.

But whenever the poles were alongside trees, the illumination seemed to disintegrate into patchy white blotches on the street. This problem will only grow worse as the trees leaf out during summer, Curran says.

Our inspection was on a drizzly night. If anything, a clear night makes for a greater difference.

Last Wednesday, I was driving up Charles St. at 11 p.m. when I entered into what appeared to be a tunnel of darkness north of North Ave.

I reflexively thought the city lights were out, then noticed that all of the overheads – three to a block – were operating between North Ave. and 25th Street. All were equipped with LED lights.

It was only from my headlights and the glowing traffic lights that I could see the roadway clearly until I reached the Safeway store. There the sodium floodlights in the parking lot spilled onto the 2400 block of Charles St., bringing restorative light.

Councilman Curran asks residents and community representatives to use their own eyes, which, he says, will “shine a light” on the problem of night-time visibility. 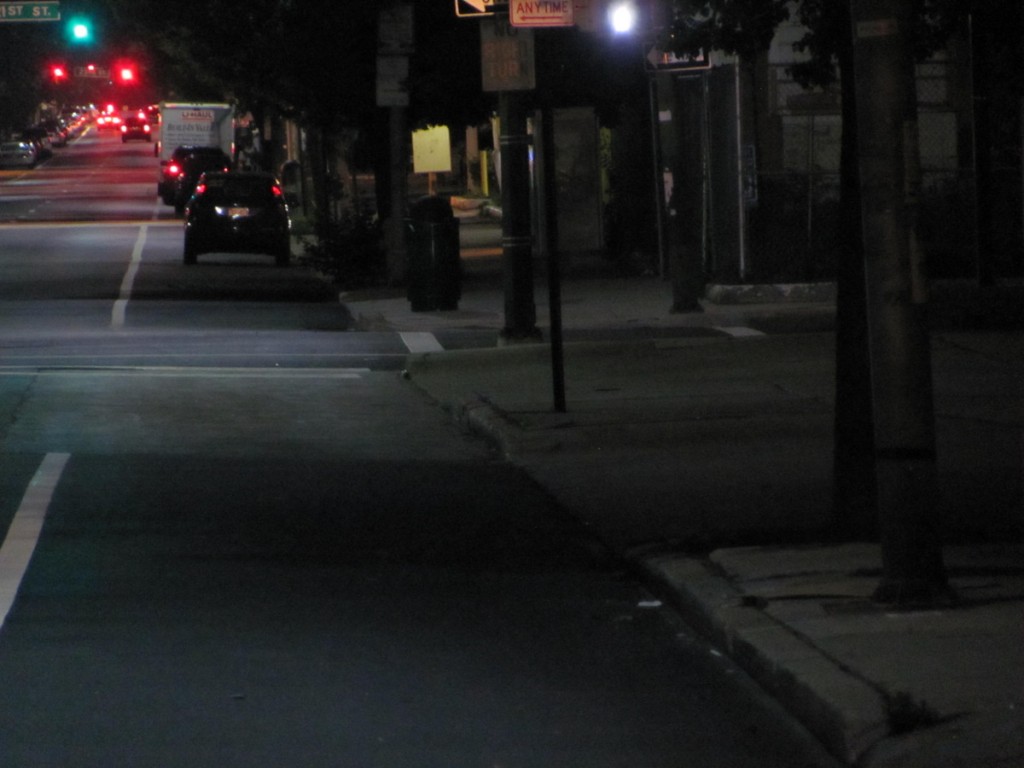 The 1900 block of Charles Street last Wednesday night, looking north along a stretch of new LED street lights. Below the same block, looking south on Charles. (Photos by Mark Reutter) 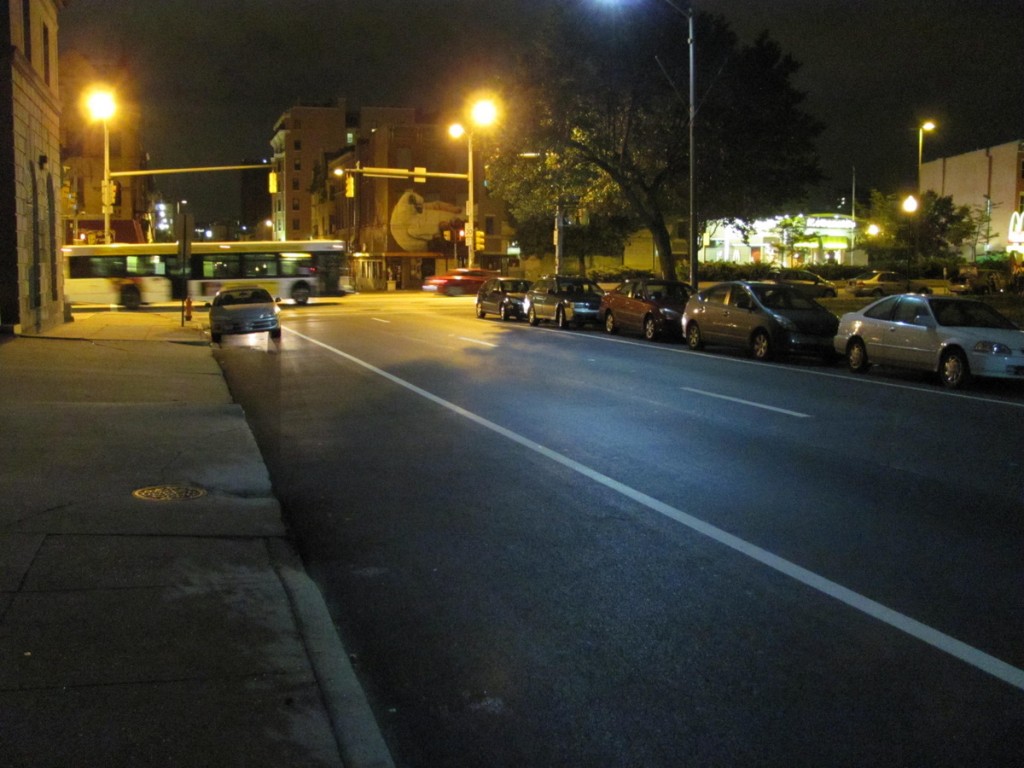