Following his forced resignation in February as chief of the Mayor’s Office of Information Technology (MOIT), Rico Singleton has been contacting and lobbying his former colleagues at MOIT on behalf of technology companies.

Singleton operates as RS Consulting, whose main office is listed as Suite 182 at 211 East Lombard St. The address turns out to be a UPS Store. The manager of the store confirmed that Singleton rents box 182.

Singleton is also the resident agent of Novetsoph Consulting LLC that was incorporated six weeks ago.

In an angry outburst on Wednesday, City Comptroller Joan Pratt said Singleton was involved in city software and information technology contracts since he resigned under a cloud four months ago.

Pratt later read portions of an email from Singleton to acting MOIT Director Robert Minor saying that he was an advisor to IT companies doing business with the city. 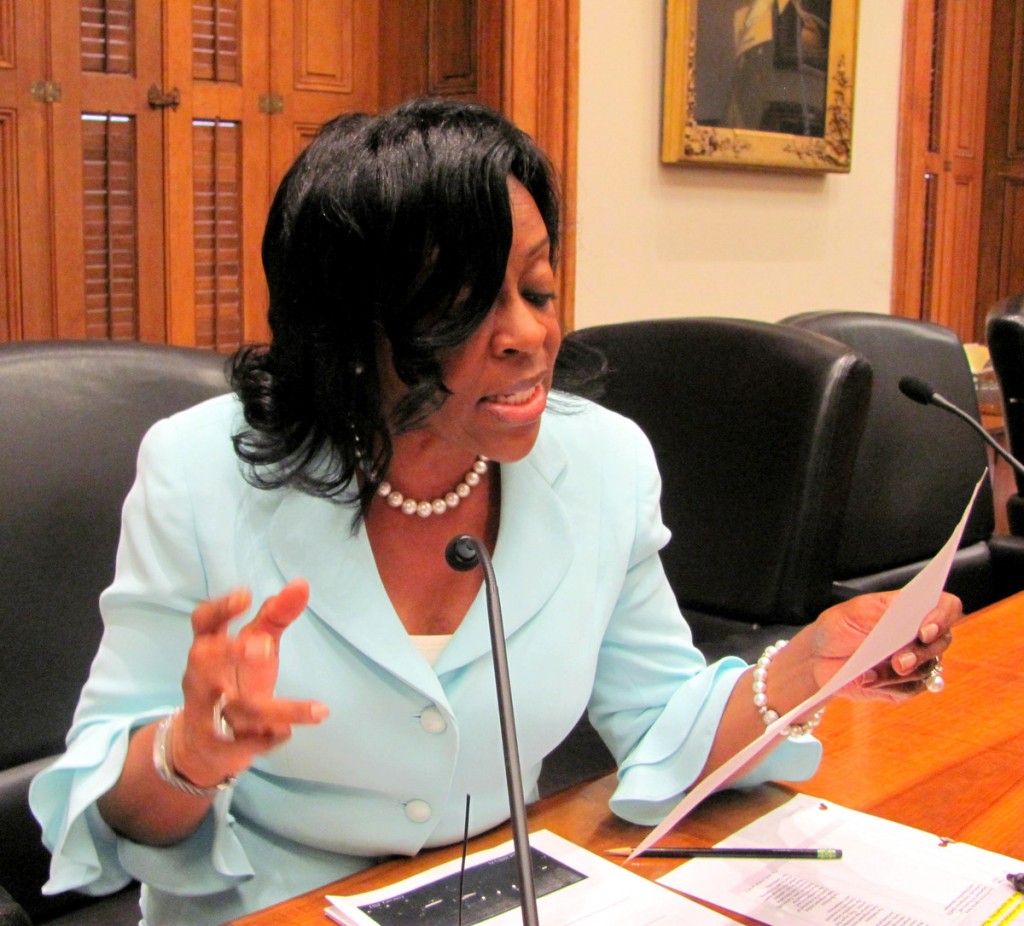 Joan Pratt reads portions of an email from Rico Singleton to MOIT after the Board of Estimates meeting. (Photo by Mark Reutter)

Singleton further said he could not bid directly on city work because of conflict-of-interest rules involving ex-employees.

The email indicated that Singleton was involved in top-of-the-line Cisco video phones recently installed in the offices of Mayor Stephanie Rawlings-Blake, Bernard C. “Jack” Young and other city officials.

Singleton was removed on Feb. 28 as Chief Information Officer and director of MOIT by Rawlings-Blake after an audit found that, at his previous job as deputy chief information officer for New York State, he had negotiated for a job for his girlfriend and tried to get a position with a computer vendor he had hired.

At the time, Rawlings-Blake called the New York State allegations “deeply disturbing” and said they were not known by her office when Singleton was hired in late 2010.

Singleton, whose hires as MOIT director raised eyebrows, dropped out of sight after tendering his resignation from the $160,000 city post. He could not be located yesterday.

The contract under fire by Pratt was first reported in The Brew last January. It involved the Board of Estimates award of $12 million to 11 technology companies for computer hardware and software for city agencies.

Digicon Corp., based in Rockville and Herndon, Va., was awarded the largest share of the contract, $3.2 million. According to Pratt, funds from this contract were used to install the video phones for City Hall, which, she said, cost taxpayers $659,000 during a time of budget cutbacks.

“None of the items of the contract allow for the purchase of telephone equipment,” Pratt added.

Pratt said that overseeing telephone service for city government is the duty of her office under a 1949 law. “The mayor is trying to usurp the responsibility of the comptroller’s office,” she said.

Several times Pratt accused Rawlings-Blake of telling “an untruth” about her lack of knowledge of the phone installations. Pratt said the mayor evaded her when she tried to express her concerns directly.

“I was told you were out of town,” Rawlings-Blake said.

“I called you on the phone. You never called [back],” Pratt responded.

In response to Pratt’s allegations, O’Doherty said yesterday, “The city solicitor has advised that there are no factual or legal merits to the allegations made [by Pratt]. . . Obviously, the mayor is disappointed with the baseless personal attacks that were made.” 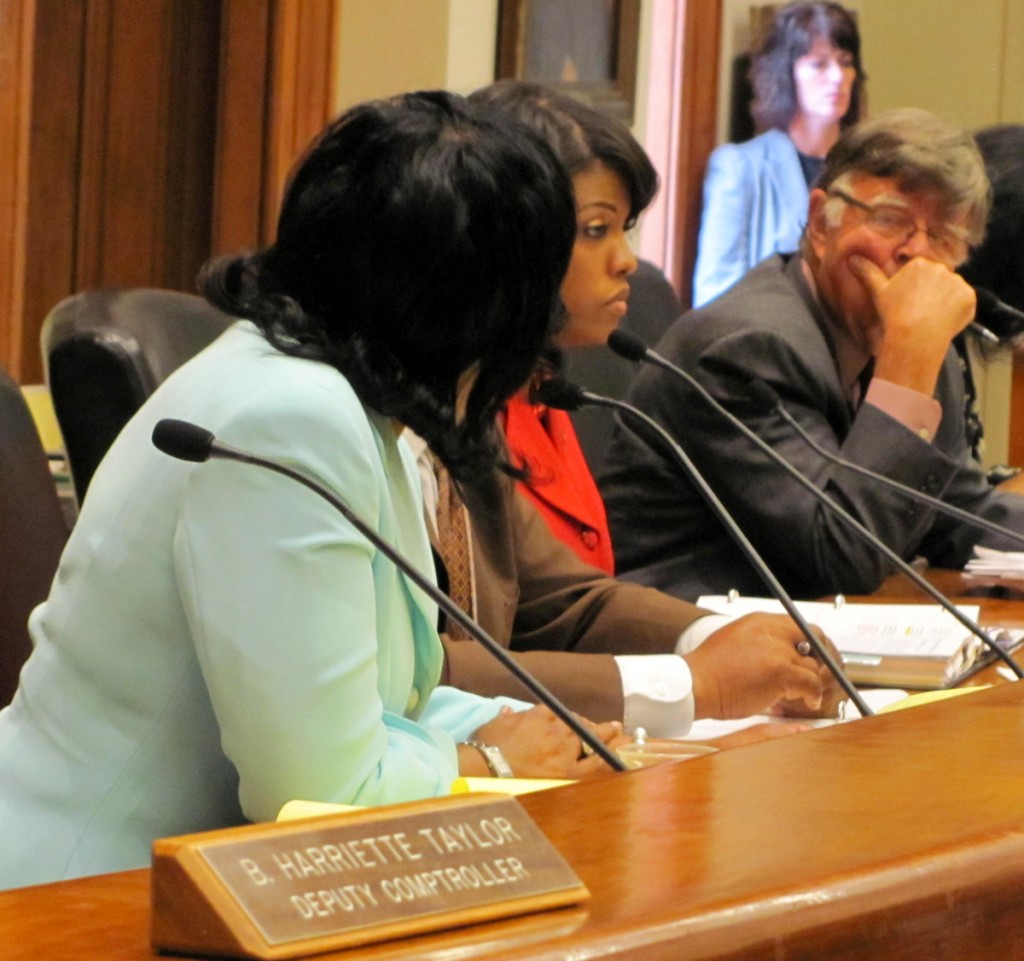 Mayor Rawlings-Blake listens to Pratt’s criticism at the Board of Estimates. To her left is City Solicitor George Nilson. (Photo by Mark Reutter)

Pratt delivered her remarks with uncharacteristic vigor at the weekly Board of Estimates meeting. She often turned to face the mayor with whom she shares the dais.

The mayor avoided eye contact and stared stoically at the rear of the room. At one point, she interjected, “I’m very proud of the work MOIT has done, saving taxpayers money.”

In addition to the Digicon contract, Pratt clashed with the mayor over a $7.5 million telecommunications contract that was before the board on Wednesday.

The board was scheduled to award the contract to upgrade the city’s telecommunications system to IBM. Pratt asked that it be deferred for one week. The contract was instead delayed for three weeks at the request of the mayor.

Following the board meeting, Pratt continued to denounce the “illegal” video phones installed in the mayor’s office until she was silenced by her longtime aide, Danice H. Lewis.

Lewis maneuvered Pratt to a side exit and later promised that the comptroller would release all relevant documents after she met with Rawlings-Blake later in the morning.

Pratt has since reversed course.

Declining to release any documents or emails yesterday, the comptroller said through another aide that she will defer public comment until she meets with Rawlings-Blake at some unspecified future date.

(Rawlings-Blake is currently in Orlando, Fla., where she will speak on crime prevention and several other topics today at the annual meeting of the U.S. Conference of Mayors.)

Sitting between Pratt and Rawlings-Blake at Wednesday’s meeting was Council President Jack Young.

Asked by Pratt if he had a new video desktop phone at his office, Young said he did. He quickly added that he had not requested the phone, but it simply appeared one day.