One would expect a certain amount of gravity during City Council votes that could summarily kill six-figure line items in the city budget and thereby find savings to preserve fire companies and recreation centers for Baltimore’s poor children.

But there were times yesterday when Council members cast their votes after casual pauses, the kind you have when the waiter is asking whether you’re in the mood for dessert.

Take the proposal to chop $366,250 by postponing a software upgrade that had been requested by the Mayor’s Office of Information Technology (MOIT).

“Mmmm, no,” Councilwoman Helen Holton said, when her turn came to possibly green-light the cut, one of a package of reductions sought by City Council President Bernard C. “Jack” Young in a gesture of defiance to Mayor Stephanie Rawlings-Blake.

By a 9 to 5 vote, the council sided with Holton, rejecting that cut and another suggested “techie” cut – the elimination of MOIT’s requested $124,800 for “Enterprise Innovation and Application Services.”

But at the end of the day, the Council did give preliminary approval to amendments lopping $6.1 million off the mayor’s proposed $2.3 billion spending plan. Included in that total was nearly a million dollars in cuts proposed by Councilman James B. Kraft.

“My colleagues and I have sent a clear signal that restoring funding to vital city services should be our top priority,” Young said in a statement, following the votes on budget amendments that largely eliminate unfilled positions, hitting the police administration, inspector general’s office, CitiStat and the finance and law departments.

The Council cannot increase the city’s budget – that’s only within the purview of the mayor and the mayoral-controlled Board of Estimates. But it can cut the budget in hopes that the mayor will allocate those savings into programs that the Council wants funded.

The savings approved yesterday could yield an extra $1.1 million for rec centers, $1.6 million for youth summer jobs and $1.7 million for after-school programs, according to Young’s office.

Councilwoman Mary Pat Clarke said the extra money for rec centers “is a very wise move” that could could give the city more time to try and find credible operators to run the rec centers: “the RFPs so far have been unsatisfactory.”

What Will the Mayor Do?

The Council’s action wasn’t final – they’re scheduled to vote on the approved amendments this Thursday at 4:30 p.m. The even bigger question mark is whether Rawlings-Blake will agree to use the cuts to restore any of the programs that Young and the Council want.

In a statement released by her press office, Rawlings-Blake said she is “disappointed and very much disagree[s]” with the council’s cuts.

Spokesman Ian Brennan said in an email that the Council was being “irresponsible” in “eliminating funding for neighborhood police patrols.”

Councilman Robert Curran pointed out that the mayor is under no obligation, if the Council cut out spending items, to honor their wishes and save rec centers or fire companies.

“I need some reassurance before I vote for any cuts,” Curran said, recalling how he voted in 1997 for a pension fund cut, assured by Council colleagues it was going to be applied to Recreation and Parks.

Instead, it ended up being used by then-mayor Kurt Schmoke to fund property tax reduction. “I’m not going to do that again,” Curran intoned.

Oddly, one of the few areas where Rawlings-Blake has indicated a willingness to cut (in a June 7 letter to the Council) was the $366,250 software upgrade that Holton and the council chose yesterday not to eliminate. 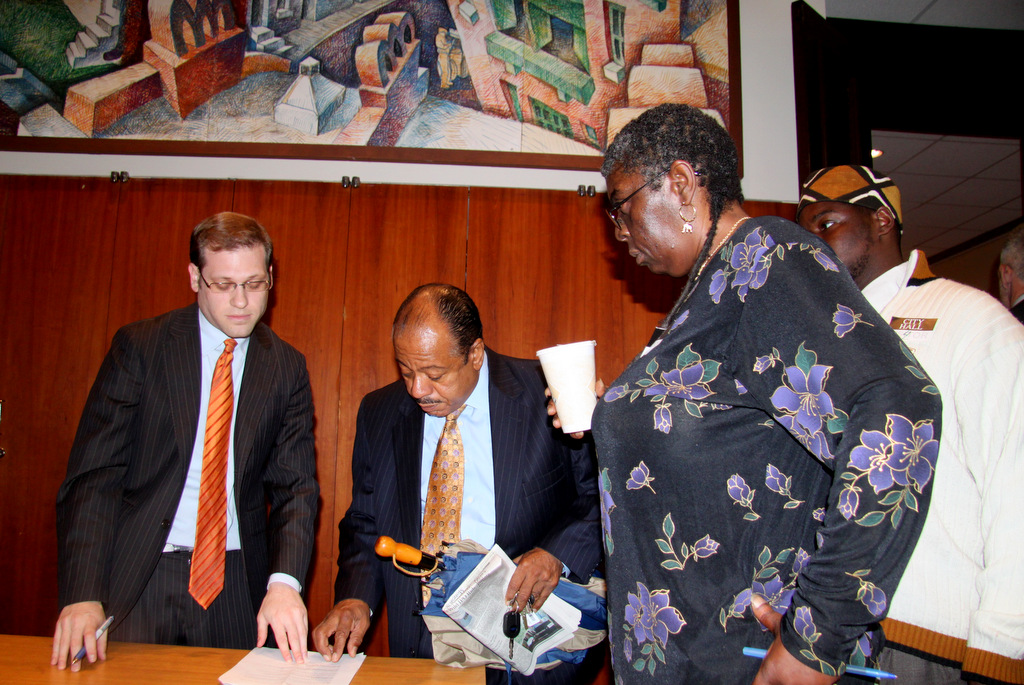 Missing Members and a Council Divided

Curran said he was voting against it: “Any positions that have to do with waste removal and keeping my district clean, I cannot vote for.”

This prompted major eye-rolls in some quarters.

“They have 122 vacant positions and we’re taking away 15!” Councilwoman Helen Holton said, before the group voted to approve the cut.

As Council proceedings go, yesterday’s had a pretty high drama quotient. First there was a dispute over the rules for voting – would a simple majority do? It took a recess, consultation with Robert’s Rules of Order and finally the legislative reference office to determine that it would.

Then there was the matter of missing councilmen Ed Reisinger and William “Pete” Welch.

“It’s egregious and reprehensible that he’s got a fire station and a rec center being eliminated in his district and he not be here,” Witherspoon said. The two exchanged words when Welch finally came into City Hall toward the end of the voting session.

“I spilled hot coffee on myself in my car and decided to come here instead of the emergency room,” Welch said, when asked by The Brew why he’d been absent.

One of the biggest savings categories was city police, where Young had identified 10 vacant patrol positions that could be eliminated for a savings of $500,000, and administration budget reductions (of 2%) and executive protection cuts (of 10%) that could create $1,012,801 in savings.

(Executive protection is the unit of the police department that provides security to Mayor Rawlings-Blake, the police chief and the state’s attorney – to the tune of $1.5 million a year, according to Young’s office.)

That vote brought about more drama, because finding fat in the normally sacrosanct category of public safety signifies the priority shift Young and his allies are advocating.

“After-school programs that keep kids safe and off the street,” said Councilman Bill Henry, “are ultimately just going to be cheaper than more police running around.” That line got applause.