A lot of activists traveled long distances to make it to last weekend’s Green Party Convention in Baltimore. One delegate got an appreciative round of applause Saturday for coming all the way from Hawaii.

For local Greens, it was easy to slip right into the event, which took place over three days at the University of Baltimore and the Inner Harbor Holiday Inn.

That doesn’t mean the locals came out in droves. A small core group of Green Party activists from Maryland and D.C., many of them familiar faces from city government elections, blended in with hundreds of Greens from across the country Saturday at Baltimore’s first political convention in a century.

The weekend culminated with the expected pick of Dr. Jill Stein as the Green Party presidential candidate, following the unexpected no-show of her celebrity opponent Roseanne Barr.

Brian Bittner, who chairs the Baltimore City Green Party, took on most of the organizing responsibilities for the convention. “It was easier for me because I’m here,” he said of the prep work, which started in February after Baltimore outbid Sacramento as host. 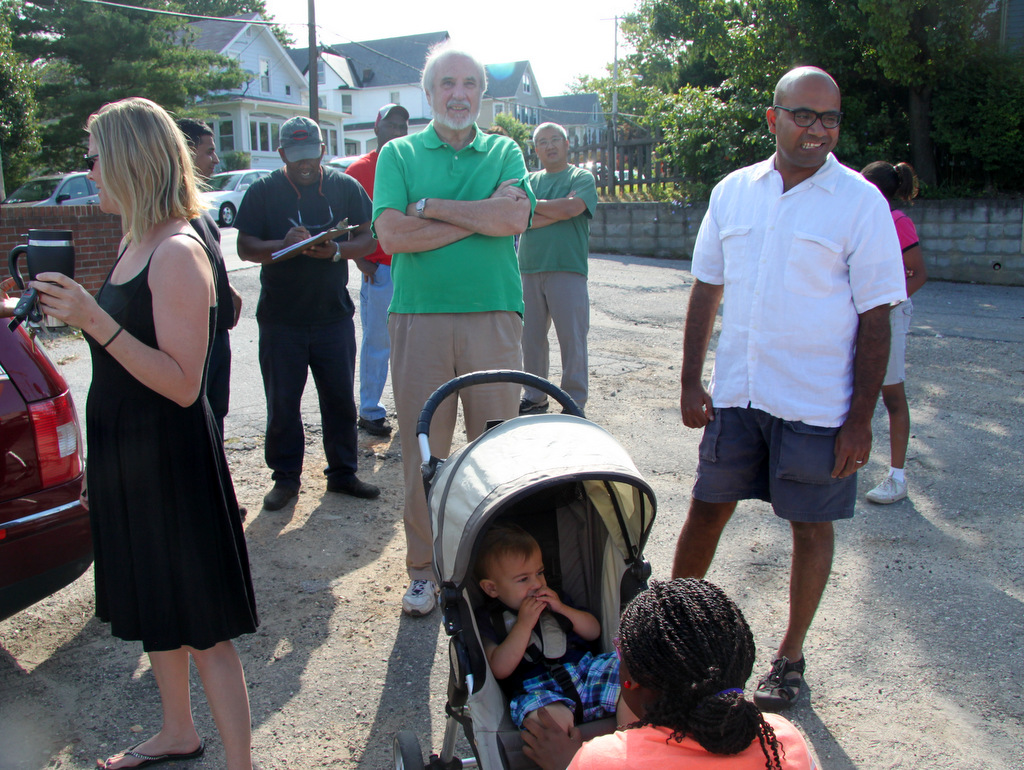 Bittner, who also works as office manager in the party’s national headquarters in Takoma Park, has clearly committed to juggling both national and local Green Party priorities. But those two sides can be hard to balance. At the convention, one Maryland Green Party activist admitted she “wouldn’t know who Jill Stein was if she walked right in front of us right now.”

Bill Barry, a Baltimore City Green Party member who has waged three campaigns for a city council seat, said he hadn’t heard a lot of talk about the convention locally. For many Greens, he said, community issues are a stronger pull than the party’s national ambitions. In an interview with The Brew at the convention, Barry focused on Baltimore topics of interest to Greens, like the planned Royal Farms mega-store in Hamilton.

“In some cases,” he said, “there’s a sense that the presidential campaign is really beyond our capacity.”

Maria Allwine, who in 2010 ran on the Green ticket for Maryland governor, said Green Party activists are usually busy “with a lot of other causes.” Foremost, she said, “we are citizen activists.”

Stein herself addressed the pull between local and national activism at a press conference Saturday. “I strongly agree that it’s very important to build from the ground up,” she said, of the claim that Greens should focus more on their city and state elections. “But that’s not the only tactic,” she said.

For some, the downside to the presidential campaign is the foregone conclusion of a Democrat or Republican winner. The election seems even more out of grasp in the 29 states – including Maryland – that as of now don’t have the legal right to put a Green Party candidate on November’s ballot.

In Maryland’s case, the state Court of Appeals in May upheld a ruling that invalidated nearly 8,981 of the 14,842 signatures the Green Party had submitted, according to The Daily Record.

Bittner said Maryland activists have been hustling to collect more signatures for an Aug. 6 deadline. The state requires 3,092 signatures, he said, and Greens hoped to have 4,000 by the weekend’s end. “Our overall goal is to turn in 5,000,” he said, to allow a margin of error.

Gathering those signatures has been a grass-roots effort at “farmers’ markets, fairs, festivals – places where people congregate,” Bittner said, and the party has hired a few professional signature gatherers. 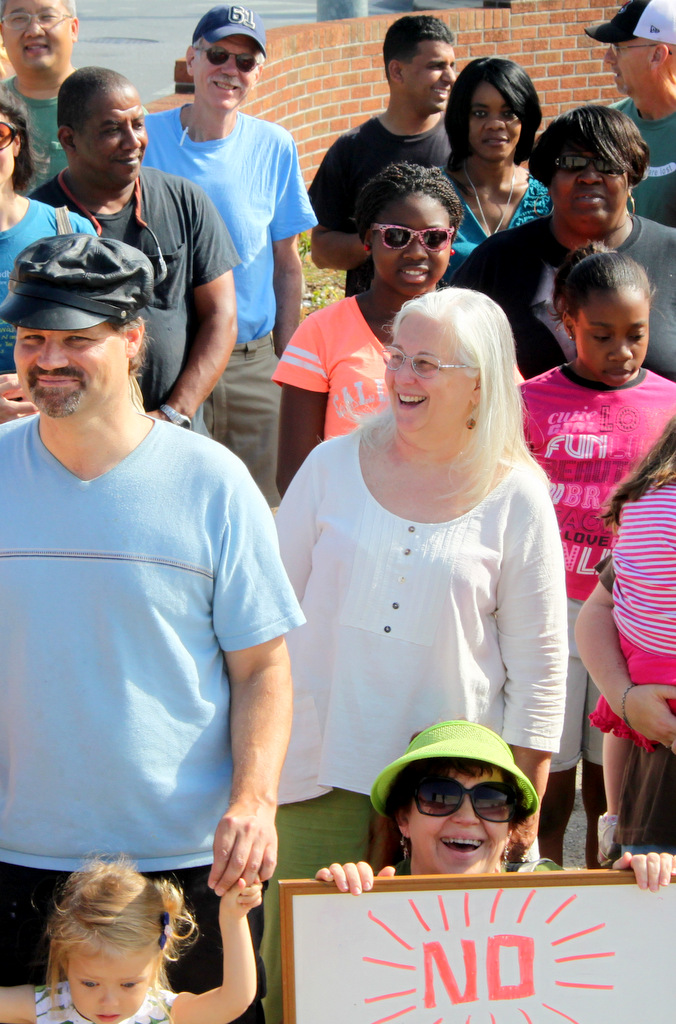 Bittner seems confident this will work out in the end, but others expressed some skepticism. Ann Lee, a Green activist who lives in Howard County, noted that the signatures are “just the first step” of a process that could be heavy on red tape.

Allwine said the appeals court decision in the first place set up “almost impossible” hurdles for third-party participation. “It would be a real blow to the democratic process to not have a candidate here in Maryland,” she said.

If Maryland Greens do get to vote in November, they’ll be checking the box for Stein, a Massachusetts physician who’s promoting a “Green New Deal” policy focused on jobs, sustainability and reform of the financial sector. Stein’s running mate, announced last week, is Cheri Honkala, an anti-poverty advocate and single mother from Philadelphia.

Roseanne Barr, the curveball celebrity candidate who emerged this winter to become Stein’s most formidable threat, was scheduled to speak Saturday but didn’t show up.

“She decided not to come, and I can’t speak for her,” said Green Party national media coordinator Scott McClarty.

In total Stein won 193.5 votes from delegates at the convention and Barr won 72. Of Maryland’s six delegates, five votes went to Stein and one went to Barr.

The Maryland Green Party set up Skype conferences with both candidates in May before voting overwhelmingly in support of Stein, said Bittner. He called Stein “the strongest candidate we’ve had in a very long time.”

Though Barry said Stein deserved the vote, he said Barr impressed him. “Obviously she is incredibly charismatic and hilarious,” he said, but she “also is very smart and she has a grasp on the issues.”

Bittner said while many Greens “appreciate the risk” that Barr took in running, she could have been a gamble for the party as it’s still crafting its identity. The public could “think of us as the party that celebrities run,” he said. “It’s easy for a small group like this to be taken over.”

And it is still a small group, if attendance Saturday is a good reflection. Though hundreds participated, the convention had the feel of a large community meeting, with Greens able to yell across the room to each other, play guitar and tell jokes.

The tight-knit vibe seems to grow from the way Greens operate locally. “On the state level and definitely on the local level, the Green Party’s really, really small – it’s a core group of people that are active,” Lee said.

The Baltimore City Green Party has over 1,000 members, but “20 or 25 who are active at a given time,” according to Bittner. Barry said neither the Baltimore group nor the Maryland state group – which collaborate “loosely” — are “organizations as formidable as we would like,” lacking funds and staff.

Barry also spoke of some challenges facing both Baltimore Greens and the national movement. The Green Party, usually thought of as majority white, “needs to reach out to other groups,” he said.

And “in a lot of places, we need to get more young,” Barry said, though he added that he’s seen more college kids getting involved. Others have noted that some of the Green Party’s overlaps with the Occupy movement are helping bring in a younger crowd.