The amendments were in an envelope that had been given to him at the start of the meeting by Andrew Smullian, senior policy adviser for Mayor Stephanie Rawlings-Blake, according to an eyewitness.

The amendments pushed back the audit requirement for city agencies from every two to every four years, delayed the start date to 2014, and even altered the kind of audit from a traditional financial audit to a nebulous “performance” audit.

It was a masterful stealth attack by Mayor Stephanie Rawlings-Blake.

At the end of a meeting full of byzantine twists, the administration got what it apparently wanted – a greatly weakened measure, which is expected to hobble to a final vote at a special Council session on August 13. (Curran’s voice mailbox was full and Smullian did not return calls from The Brew seeking comment this morning.)

Throughout the auditing controversy, Rawlings-Blake has positioned herself above the fray. She “has always supported audits,” her spokesman, Ian Brennan, explained this morning, but auditing is the duty of City Comptroller Joan Pratt, not her office.

“The mayor is hopeful that the Council reconvenes in a special meeting to approve the measure in order to meet the deadline to get it before the voters in November,” Brennan added magnanimously.

The Mechanics of Defeat

The first version of the bill, calling for yearly audits of all city agencies, was voted down three weeks ago.

After the vote, the bill’s sponsor, Councilman Carl Stokes, accused Rawlings-Blake of strong-arming three councilmen to switch their vote and defeat the bill. (For their part, the councilmen – Brandon Scott, Nick Mosby and William H. Cole IV – said they are very pro-audit, but just didn’t like Stokes’ bill.)

Last Thursday, the Council’s Judiciary and Legislative Investigations Committee, chaired by Councilman James B. Kraft, met to strike a compromise with the mayor’s office.

The panel changed the original yearly audit requirement to every other year and limited auditing to 14 agencies. (The original legislation had called for annual audits of all city agencies.)

Kraft thought he had the mayor’s support to get the bill approved last night on second and third reader.

Little did he know the administration was planning an ambush. 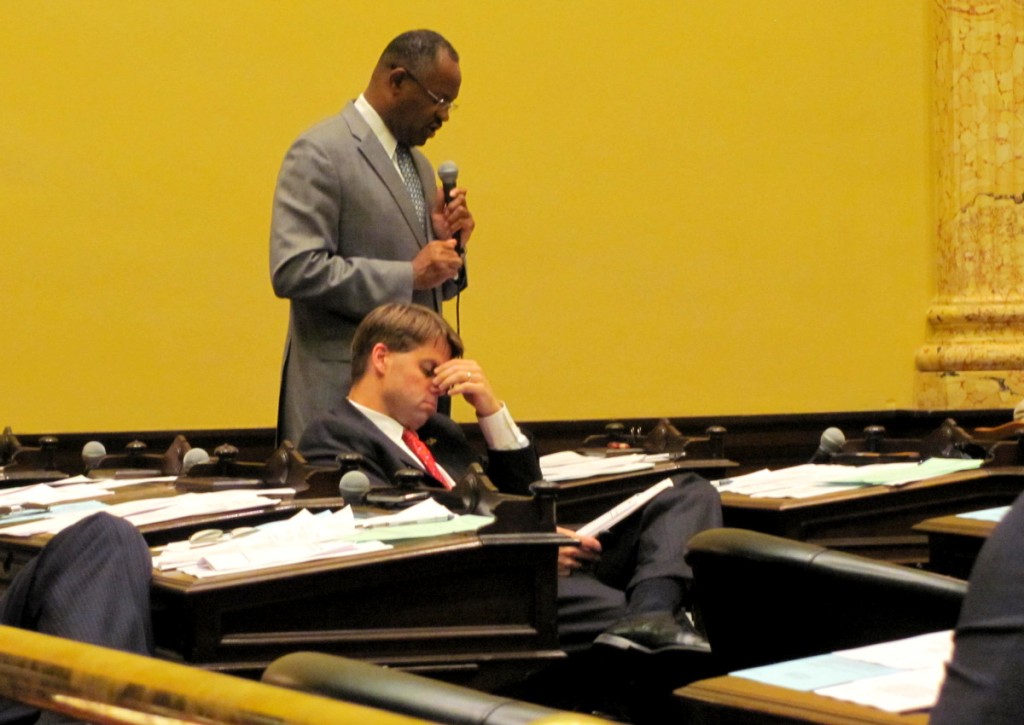 Councilman Carl Stokes speaks in favor of the compromise audit bill, while William H. Cole IV, who voted against the measure, listens. (Photo by Mark Reutter)

Kraft spelled out his own provisions before sheepishly telling a crowd packing the Council chambers: “We received amendments at 5 p.m.”

This was the first time the Curran amendments were publicly disclosed.

A vote was first taken on the compromise bill approved by Kraft’s committee. The votes split along the divide of last month, with Scott, Mosby and Cole joining Curran, Edward Reisinger and William “Pete” Welch (still listed as a bill co-sponsor) to defeat the measure by a 6-6 deadlock.

Three Council members were absent – Helen Holton, Sharon Green Middleton and Rochelle “Rikki” Spector. Holton had voted in favor of the original bill, while Middleton and Spector were against it, making for the original 8-7 defeat.

As the mayor’s lobbyists, Kimberly Washington, Angela Gibson and Smullian, sat in the chambers, Curran rose to speak.

He and Councilman Reisinger, the mayor’s floor whip, requested that the Curran amendments be voted on. Councilman Cole made a quick dash to confer with Kim Washington.

But before any vote was taken, Councilman Mary Pat Clarke jumped up.

She demanded that the Curran amendment that called for a “performance audit” (as opposed to a financial audit) be voted on separately.

Clarke questioned what a performance audit really was – no one on the Council seemed to know. (According to this government website, performance audits are reviews of how well an agency fulfills its mandate and typically supplement, not substitute for, a financial audit.)

Then came the votes. The performance audit amendment was defeated 6-6 (thereby keeping the requirement for financial audits), while the eight other amendments passed 8-4.

Clarke called the retention of the requirement for financial audits “a save” in an otherwise “disappointing vote for advocates of a strong bill.” 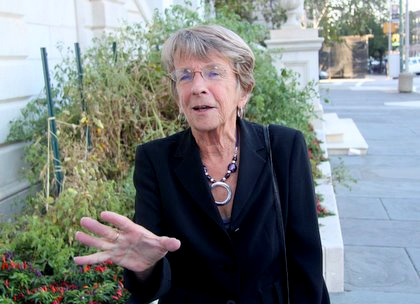 Votes on the Curran amendments were followed by two more votes.

The first passed the amended bill to second reader, and the second failed to achieve a supermajority of 12 votes needed to pass the bill to third and final reader in the same Council session (known as a “double reader”).

Thus, the audit bill is still a vote away from going on the November ballot.

City Council President Young announced a special meeting on August 13 to take up the legislation.

Toward the end of last night’s session, various Council members staked out their reasons for opposing or backing the audit bill.

For Council President Young, the new bill was “completely watered down” from the original measure. (Young has consistently voted for the tougher audit bill.)

For Councilman Mosby, who helped torpedo the original bill and supported the Curran amendments, the new bill would “streamline” audits “from every two years to four years.”

He called on Council members not to get hung up over whether audits would be conducted every second or fourth year.

Taking the lead from Mosby, Councilman Scott declared the amended bill a legislative triumph. Noting that city agencies hadn’t been audited “in my lifetime,” Scott crowed that now they would be audited every four years.

For Councilman Bill Henry, who tried to table the Curran amendments, the approved bill continued the city’s tradition of not knowing if its annual budgets were accurate.

Auditing city agencies every fourth year “makes you wonder about the budget of the other three years,” he said.

As for Councilman Curran, he sounded both upbeat and defensive. “It may not be the best, but it’s a start,” he said, before adding, “We’re not hiding anything down here.”

According to city officials, these agencies have not been audited for 25 or more years. The audits will be conducted by the city auditor, Robert L. McCarty Jr., under the direction of City Comptroller Pratt.

Whether the audit department has sufficient staff to conduct the audits is open to debate.

The comptroller say she has lacked sufficient staff to conduct major agency audits, while the mayor says she will add three audit positions to McCarty’s staff this year.

An analysis of McCarty’s work was summarized in this Brew piece.

To win final passage at the next Council meeting, the audit bill requires a simple majority of votes.