As Baltimore follows every twist and turn of Michael Phelps’ history-making performance at the 2012 Summer Olympics in London, another local athlete is competing a bit more out of the spotlight – WNBA star Angel McCoughtry, a 2004 graduate of St. Frances Academy.

McCoughtry, who grew up in Northeast Baltimore’s Northwood neighborhood, is a member of the 2012 US Olympic women’s basketball team, which is playing the team from Turkey today.

“Angel? That’s my girl!” said Cecelia Cole, director of the Northwood Recreation Center on Winford Road. “She grew up and was bred here, she played on these courts. She worked here one summer at the summer camp.”

It should be noted that Northwood was on the endangered list of rec centers slated for possible closure last year.

The Rawlings-Blake administration wanted to turn over McCoughtry’s home turf and 17 other rec centers to private operators – and shut them if no operator was found.

After heavy opposition, Northwood appears to be safe from closure, although the city still plans to close some rec centers later this year in a money-saving effort.

Leading Scorer in the WNBA

A three-time All-American for the University of Louisville, where she earned an undergraduate degree, McCoughtry was the No. 1 selection in the 2009 WNBA draft. As a forward on the Atlanta Dream, McCoughtry finished the 2011 season just a field goal behind Diana Taurasi for leading scorer in the WNBA.

McCoughtry, who also plays for the Turkish team Fenerbache Istanbul, is no stranger to international play. She was the second-leading scorer for the Americans at the 2010 world championships, and their high scorer in their game against the Czech Republic that brought them the gold.

Cole said she’s known the 25-year-old McCoughtry since she was a 10-year-old drawn to sports at the rec center and, pretty soon, taking on all comers on the center’s outdoor courts.

“Did she play against the boys? She played ’em and she beat ’em,” Cole recalled.

McCoughtry’s skill in multiple sports is remembered as well at her school.

She was “a phenomenal athlete” and an “outstanding track star,” Sister John Francis told The Dialog earlier this summer. At St. Frances, where McCoughtry periodically drops by to work out with the female student athletes, an “Angel McCoughtry Day” is being planned in September after the Olympics and when students return to school.

For Cole, who has been following every U.S. women’s game in this summer’s Olympics, if McCoughtry “hasn’t gotten the kudos she deserves,” it’s because she is, by nature, “very humble.” 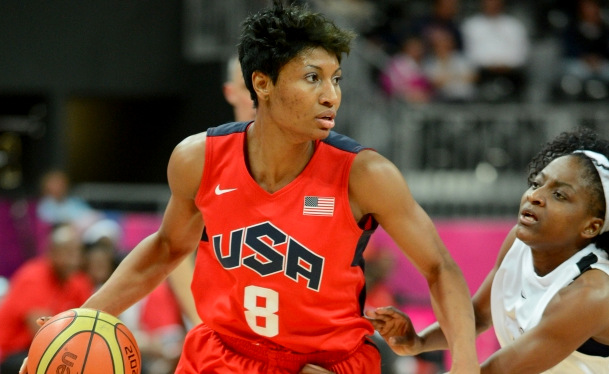 “That’s the quality that McCoughtry said impressed her when she met First Lady Michelle Obama at a team breakfast on Monday.

“She gave us all bug hugs like she knew us,” McCoughtry said, according to a U.S. Basketball news release. “For her to be so powerful and everything, it was so down to earth around her. Oh my gosh! It was the greatest feeling.”