Just as environmentalists are often derided as tree-huggers, preservationists are frequently seen as standing in the way of progress by slowing or stopping development.

Stopping demolition, adding requirements to the already arduous process of building in a city – how can that help?

Preservation battles are not fought any more by quaint ladies who know their building styles and sign petitions.

They can be cut-throat and even threaten a seasoned preservation officer’s job, as the ongoing dispute about the preservation of the Morris A. Mechanic Theatre in Baltimore proves.

The story of the Mechanic is full of irony because its subject is not a historic treasure of the sort that most people identify with preservation.

Instead, it is about a “Brutalist-style” modern building that itself stands on the rubble of an historic predecessor – in this case the old Baltimore Sun building. 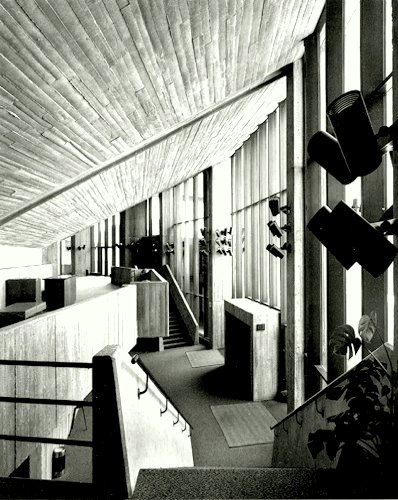 The severe sculptural modernism of the Mechanic, as seen from the theater’s lobby balcony. (seasonsofsoulfilm.com)

The Mechanic, designed by then-world-famous John M. Johansen (now 96), one of “The Harvard Five,” opened in 1967 and landed Baltimore on the cover of architectural magazines.

But today modernism and particularly the subset “ism” of Brutalism, is discredited.

So much so, that the British Daily Mail put the Morris Mechanic building in its recent list of “the world’s 10 ugliest buildings.”

What those who deride the Brutalist style don’t get is that architecture needs to be understood in the historic context in which it was created.

In the case of Charles Center, Johansen tried to create a sculptural accent in contrast to the glass towers rising around the Mechanic.

Brutalism generally was conceived as a heroic gesture, an expression of function with an emphasis on material, while modernists typically tried to de-materialize buildings through extensive use of glass.

The preferred expression of Brutalists was concrete, a material that can be molded and formed like clay and was thought to hold up to weather forever.

What those who are quick to support the demolition of the now-vacant theater don’t see is that the Mechanic is part of an ensemble of buildings that were designed by world-renowned architects such as Mies van der Rohe.

The ensemble was conceived as the first post-World War II kick-in-the butt for a city that had been architecturally and economically stagnant throughout the 1950s.

Never again would the city put such strict requirements on its proposal requests or wind up with such a collection of world-class architecture.

Back to the question of the role of preservation:

Nobody in Baltimore today would vote for demolishing City Hall, Amtrak’s Penn Station or the the Nations Bank tower.

Yet, back in the 60s and 70s when Johansen, van der Rohe and I.M. Pei made their debut in Baltimore, it was this very ornate architecture of the early 20th century that was ridiculed as too opulent, fuzzy and dysfunctional.

One must remember, ornament was at that time a four-letter word in architecture. This is how the gorgeous Beaux-Arts Penn Station in New York City was turned into dust. 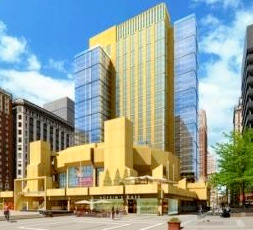 So who is to say we wouldn’t regret in, say, 10 or 20 years, that we tore down the Mechanic, a piece of architecture that is certainly unique?

Isn’t it precisely the charge of historic preservation to ensure that elements of the layers and styles that a city developed over its history are maintained in such an amount that the city looks grown and real, rich with contrast and depth?

And that preservation is needed most when the value of a building is not yet widely seen as a slam dunk?

The Mechanic’s detractors may have decided they don’t like Brutalism because they associate it with its lesser exponents, “third or fourth-tier architects who have turned buildings into bunkers,” as I suggested in a 2007 Baltimore City Paper piece, which also describes the one flaw I see in the Mechanic, that it faces the wrong direction.

The theater looks out on Charles Center, the network of walkways and plazas built as part of a 60s-era urban design concept to make large open pedestrian-oriented spaces at city centers.

The concept never caught on. Today it’s unusual to see anyone near the fountains or benches in this space, the only vantage from which to truly appreciate the theater.

(It should be added, however, that the city’s rebuilding of Hopkins Plaza may attract more strollers and office workers to the area in the near future.)

Of course, somebody has to pay for preservation and upkeep and, in the case of the Mechanic, for adaptive re-use.

About four years ago, the developer for the site had forged a compromise that included preservation of most of the Mechanic, but still allowed the addition of a residential tower that would preserve the important corner of Baltimore and Charles streets – Baltimore’s geographic origin for the four quadrants that define the cardinal directions. 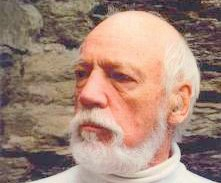 The old theater was to be converted into a retail area with restaurants facing the Hopkins Plaza and a 30-story apartment tower.

This seemed a perfectly fine compromise which even fixed the problem of the current face of the theater, orienting it towards Baltimore’s premier street.

But the developer came back this year and applied for the full demolition of the Mechanic, now to be replaced by two tall towers.

Most prominent downtown groups (not unexpectedly) fell into line, worried that the important investment might get lost if the requirement to preserve the theater building would stand.

To this end, Mayor Stephanie Rawlings-Blake and Planning Director Tom Stosur went as far as trying to unseat the executive director of the preservation commission (CHAP), who had in 2007 voted to declare the building a historic landmark. (The landmarking, though, never happened after the Planning Commission rejected it, and the mayor never acted on it.)

The coup to unseat the commission director misfired after publicity brought out supporters in force. It is less than clear, however, what will happen next.

With trust gone, the commission voted three weeks ago to deny the demolition request and block demo temporarily for six months with the power of a “special list.”

But the building, not designated as a historic landmark, can be demolished after a six-month hold unless Mayor Rawlings-Blake acts  on the earlier recommendation and declares it a landmark. Nobody is holding their breath.

The always-provocative architect Rem Koolhaas groused in an exhibit recently that preservation is getting out of hand and will prevent new development.

I think there is no danger of that, even in Baltimore with its large number of historic districts and historic landmarks.

Interestingly, it is precisely these preserved historic districts (Federal Hill, Fells Point, Canton, for example) that are thriving. They have some of the highest home prices in Baltimore and have become trendy neighborhoods.

Many old industrial buildings received a new lease on life by creative developers who didn’t fear but sought preservation status, so they could receive historic tax credits for their projects. 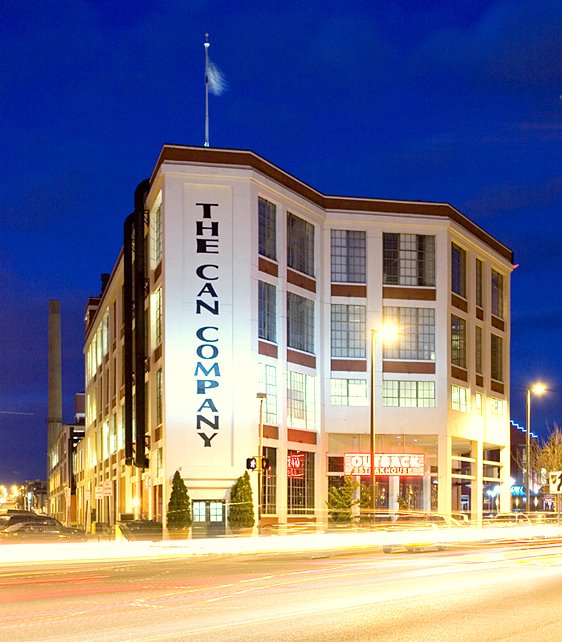 Creative reuse: The Can Company in Canton. (Courtesy of National Trust for Historic Preservation)

In this way, historic preservation not only did not prevent development, it enabled it.

Historic preservation has long ago evolved from a nostalgic clinging to times past to an essential tool for economic development and attracting the well-educated “creative class” needed to propel the old industrial “legacy” cities into a prosperous and dynamic future.

The Mechanic should be part of the mix.
________________________________
Klaus Philipsen, FAIA, is a Baltimore architect, planner and urban designer and the president of ArchPlan Inc. He blogs at http://archplanbaltimore.blogspot.com/, from which this article was adapted.