About 25 West Baltimore residents and labor organizers braved the drizzle and held a rally last night to save Truck Company 10, which is slated for closure after a century of service to the Harlem Park community.

“I ask the mayor, please don’t close this company,” said Marsha Bannerman, who has lived near the West Lafayette Avenue Fire Station for her entire life.

“I see fires all the time because there are a lot of abandoned houses in this community. If this company goes, it would be too close for comfort.”

The Brew reported last week that Truck 10’s disbandment, scheduled for Oct. 1, has been placed on hold by the fire department.

Next week, the City Council will hold a hearing on the impact of recent fire company closings on fire response times and citizen safety. 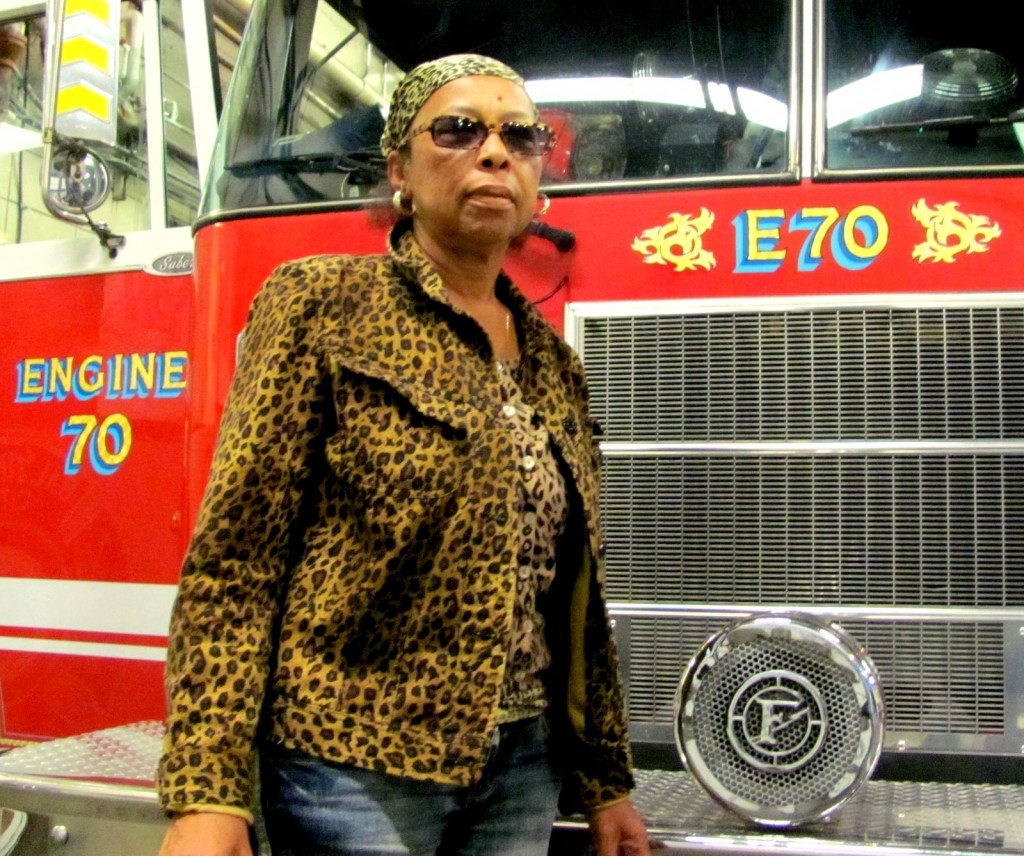 “Please don’t close this company,” says Marsha Bannerman. She posed in front of Engine 70 because Truck 10 was out on a run. (Photo by Mark Reutter)

Truck 10 serves some of the poorest districts in West Baltimore and is the fifth busiest truck unit in the city.

In fiscal year 2012, the company responded to 2,582 calls, mostly for medical emergencies, but also for some major fires.

The ladder company was credited last May with helping to locate and save three unconscious children in a burning rowhouse on West Lexington Street.

Shantress Wise recalled at the rally how members of Truck 10 had saved her family several years ago.

“Carol Williams, who was my aunt, was trapped in a rowhouse fire with her family on Mount Street. Truck 10 and Engine 8 brought them out of a second-floor window.

“My aunt did not make it, but they saved seven other family members of mine that day. I want to say ‘thank you’ to each and every firefighter for risking your life to help when my family needed assistance. You are lifesavers.”

The rally was sponsored by UnitedWorkers.org, a labor group that has been active in organizing food and service workers in the Inner Harbor.

Luis Larin said the group is expanding its efforts to address neighborhood problems. “Our workers are part of this and other communities. They work downtown but live in these neighborhoods. And the city is not helping them. It is helping the developers.”

Michael Coleman, another organizer, told the crowd that the effort by the Stephanie Rawlings-Blake administration to close Truck 10 “is just another example of resources being taken from us.”

Alluding to the shutdown of city rec centers, Coleman said, “This is a direct attack on our community. Mayor Rawlings-Blake and other politicians seem to have forgotten whose city this is.”