Gathering 300 cheering, clapping parents and other school supporters, the group pushing an ambitious plan to start repairing neglected city school buildings met last night in one of those structures, an elementary school auditorium.

As speakers rallied the troops with a familiar call to action – push Annapolis to approve a $32 million block grant to ultimately leverage more than $2 billion needed – students underlined the message with fresh tales from their crumbling schools.

“On one of those days recently when we had a lot of rain, the stairwells and the band room were flooded with water,” said Naim Smith, an eighth-grader at KIPP Ujima Village Academy in West Baltimore. “Our first band rehearsal was canceled.” 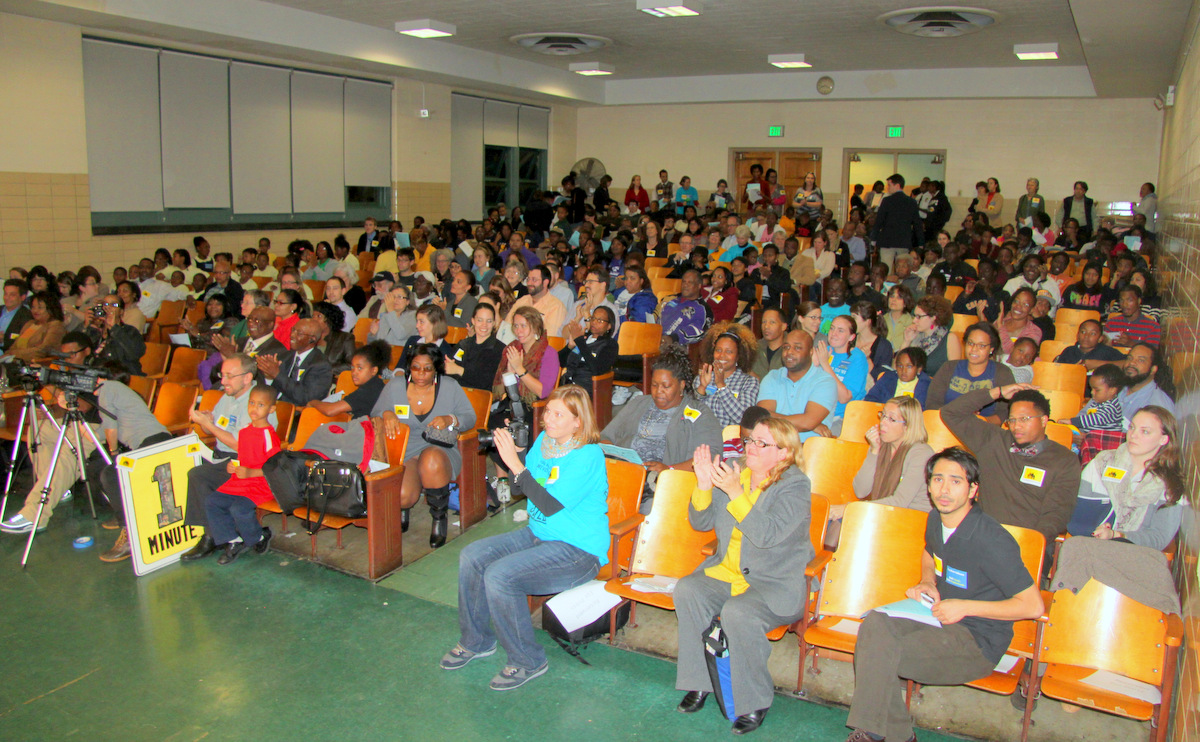 Rally held in Barclay Elementary School calling for a city school construction plan that is not “a band-aid approach.” (Photo by Fern Shen)

But along with the descriptions of rodents in the halls and freezing-cold or stifling-hot classrooms, school advocates had to contend with some other troubling images, emanating from a recently-released city schools audit:

Millions of dollars paid out in questionable overtime, sick leave and vacation pay going to teachers and administrators who may not have been entitled to it, millions more in unpaid bills that were never referred to a collection agency,  millions of dollars in unverified payments for  academic and maintenance work the district contracted.

The damning audit (first reported in the Baltimore Sun) and other reports (including district-paid meals at pricey restaurants and clubs and a $264 lunch for students at Hooter’s) are causing major heartburn for advocates whose campaign on behalf of Baltimore public school students stretches back many years. 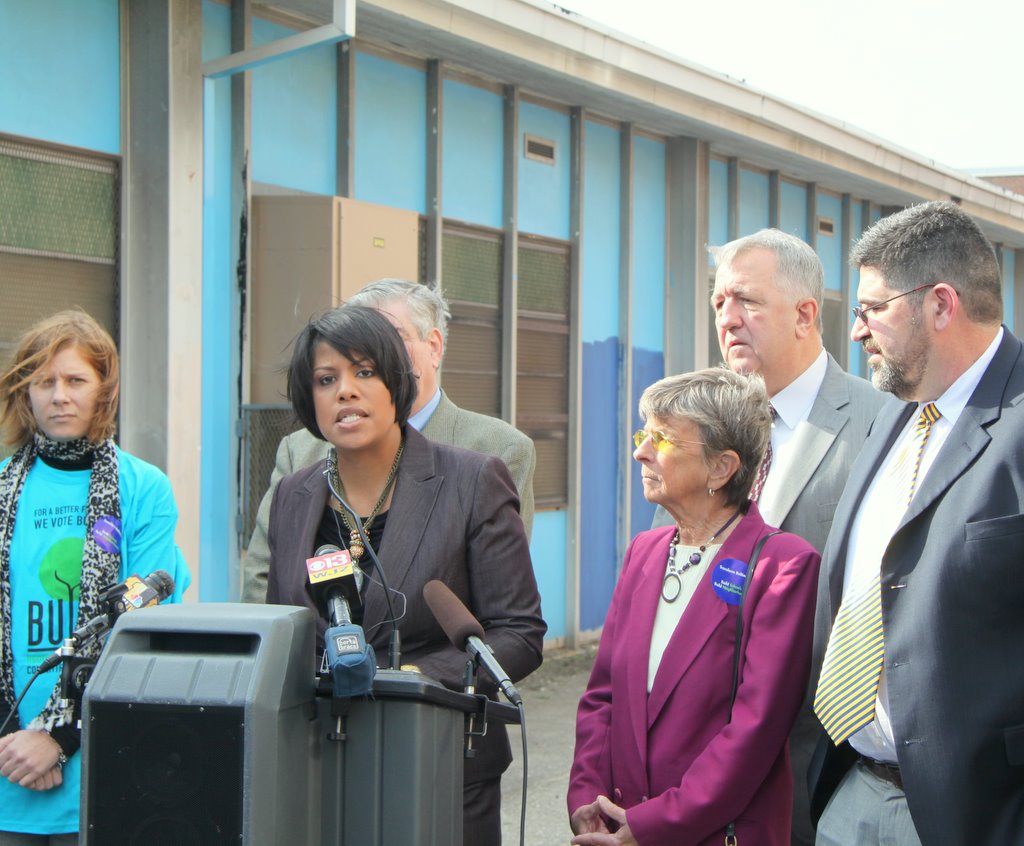 The Mayor speaking earlier this year in support of the bottle tax, with schools chief Andres Alonso, right, listening. (Photo by Fern Shen)

A stern Mayor Stephanie Rawlings-Blake publicly warned city schools CEO  Andrés Alonso to correct the problems “immediately,” City Councilman Carl Stokes was on the radio last night railing about “accountability,” and state lawmakers are saying the waste, fraud and lack of oversight permitted by North Avenue will make an already-hard campaign in Annapolis that much harder. Alonso, on the defensive, issued a statement to the media.

On Monday, two leaders of the school construction effort fired back on the issue in a Baltimore Sun op-ed, acknowledging that the waste outlined in the audit is “unacceptable” but chiding public officials for using it as an excuse to abandon the cause.

“What angers us in the current debate is how quickly the needs of our children are lost to the selfish politics of the moment,” wrote Rev. Glenna Reed Huber and Rev. Andrew Foster Connors, clergy co-chairs of BUILD, Baltimoreans United for Leadership Development. 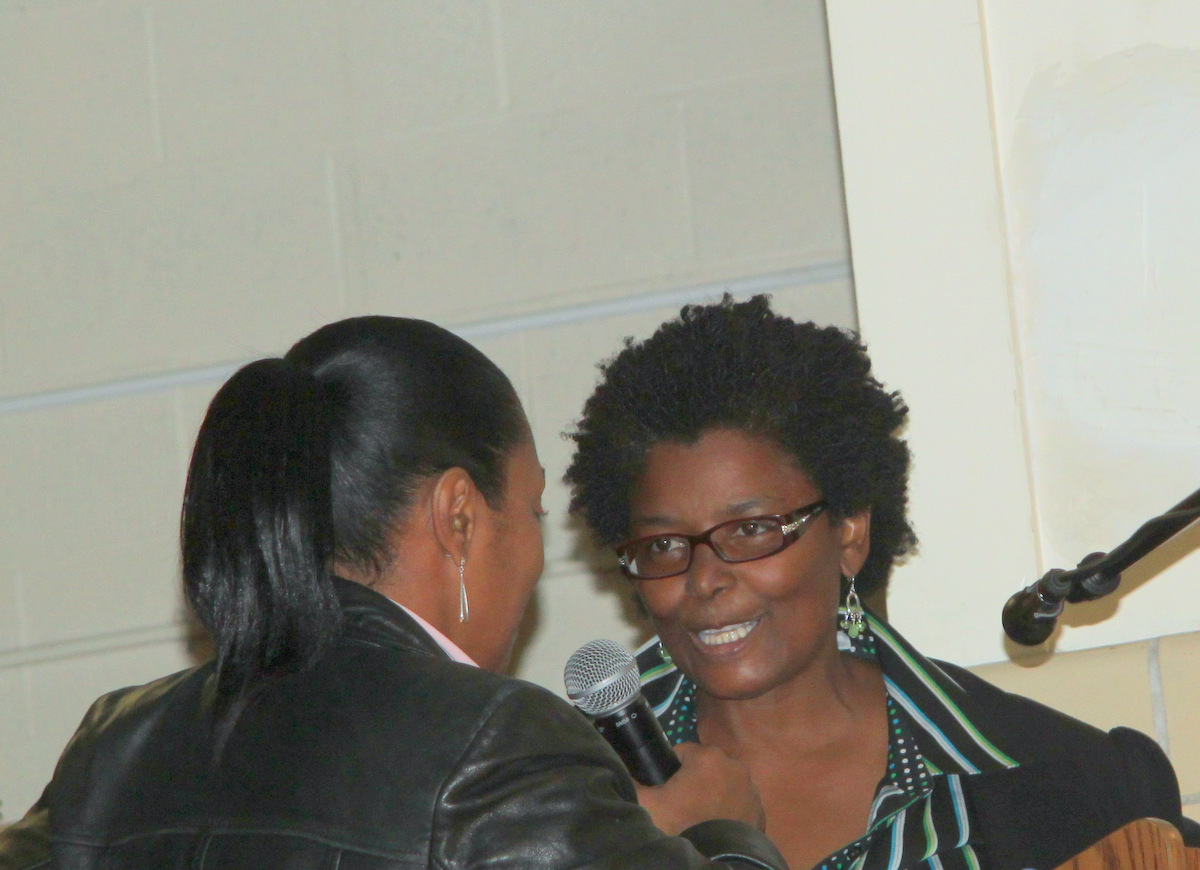 Del. Mary L. Washington, one of several state lawmakers who pledged to make the block grant their priority in Annapolis this year. (Photo by Fern Shen)

Last night’s speakers never explicitly brought up the audit and Alonso sent Chief Academic Officer Sonja Brookins Santelises in his place (“Dr. Alonso had a prior engagement,” organizers explained.) But in the lobby, a leader of the school construction campaign was primed for the question.

Lisa Quinones said that entities to provide accountability “could easily be set up,” following the models used in Greenville, South Carolina and other districts. Quinones, with Arica Gonzales, is an action co-chair of the Baltimore Education Coalition, the event’s organizer.

Quinones called it “an excuse” to give up on city students because adults aren’t managing their schools properly.

Last night was all about rallying the base and getting public officials to agree to again take up the cause.

“These buildings have been lying about who you are for too long,” Gonzales said, as parents in the room pumped their fists in the air. 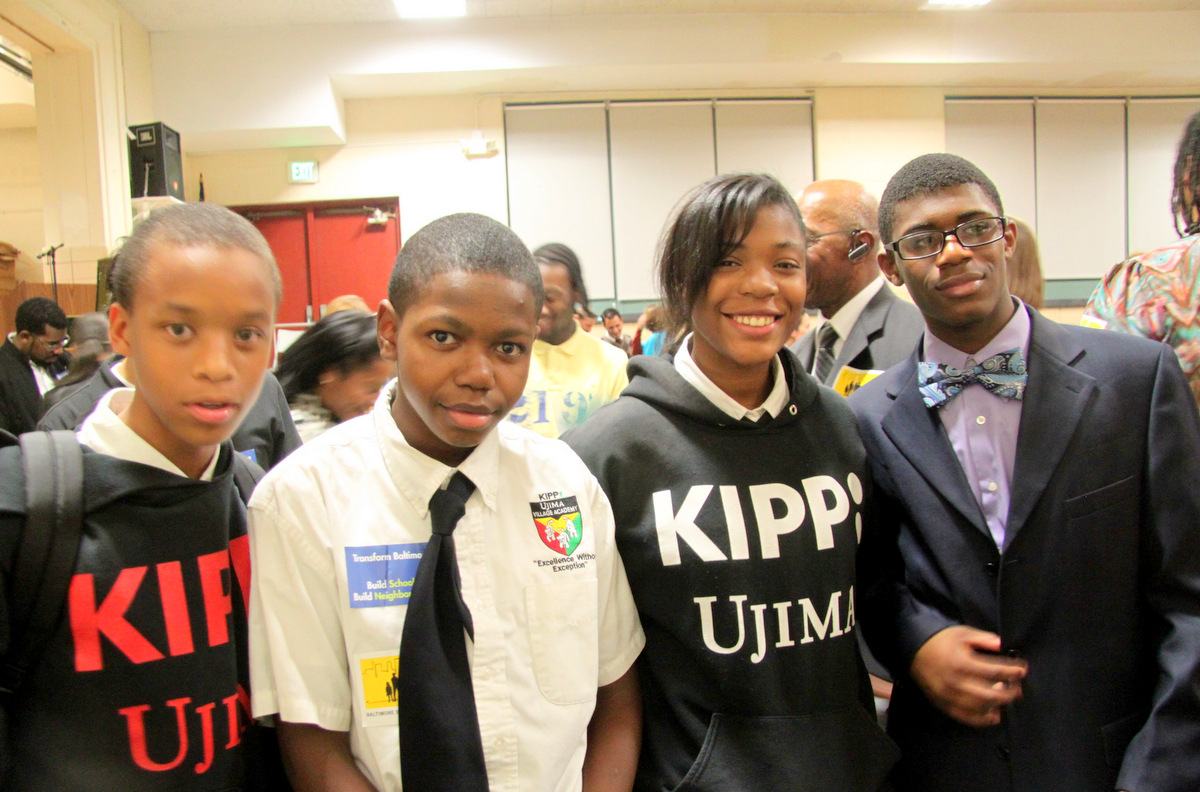 Leon Pryor, a kindergarten teacher from Calvin Rodwell Elementary School, walked the group through the legislation, which would lock in existing capital funding for city school construction and allocate $32 million to be used as annual payments on a larger loan. Projected on the screen was recently-renovated Leith Walk Elementary, which invited the media to come in last month and see how such schools could look.

“We want to have several Leith Walks allover the city every year,” Pryor said.

State Senator William C. Ferguson IV, a former city school teacher, was one of many who recalled their own experiences in shabby city school buildings: “My classroom didn’t have a doorknob and I had to carry around scissors in my pocket to open and close the door.”

Organizers reminded the audience to prepare for a a march they hope will reach 3,000 in Annapolis during the coming 2013 legislative session. As the crowd filed out, KIPP Ujima eighth graders said they plan to attend the Annapolis rally.

“I don’t want to be in some rusty old school,” said Deneira Ray, of Park Heights, who wrinkled her nose as she told about mice, stuck sink faucets and other problems at her school. “Sometimes during the winter, it’s really cold. That’s just not right.”