In an important step to modernize its aging fleet, the Baltimore City Fire Department has placed its first order for new fire trucks in six years.

Two “aerial tillers,” or trucks with 100-foot-long ladders, were ordered last month through a cooperative purchasing contract with fire departments in Maryland and Texas, a practice that lowers the unit cost of the equipment through large orders.

Loaded with state-of-the-art safety and ergonomic features, the new trucks will cost $1,810,458, or a little under $1 million per truck, according to material submitted to the Board of Estimates, which unanimously approved the order.

The purchases come none too soon, says Michael B. Campbell, president of Baltimore Fire Officers Local 964. “Some of our first-line vehicles are in desperate need of replacement and our reserve stock is pathetic,” he told The Brew.

“We have first-line engines that will not go into pump mode 100% of the time. That is a huge safety factor when firefighters are in the building and could lose a water supply.” 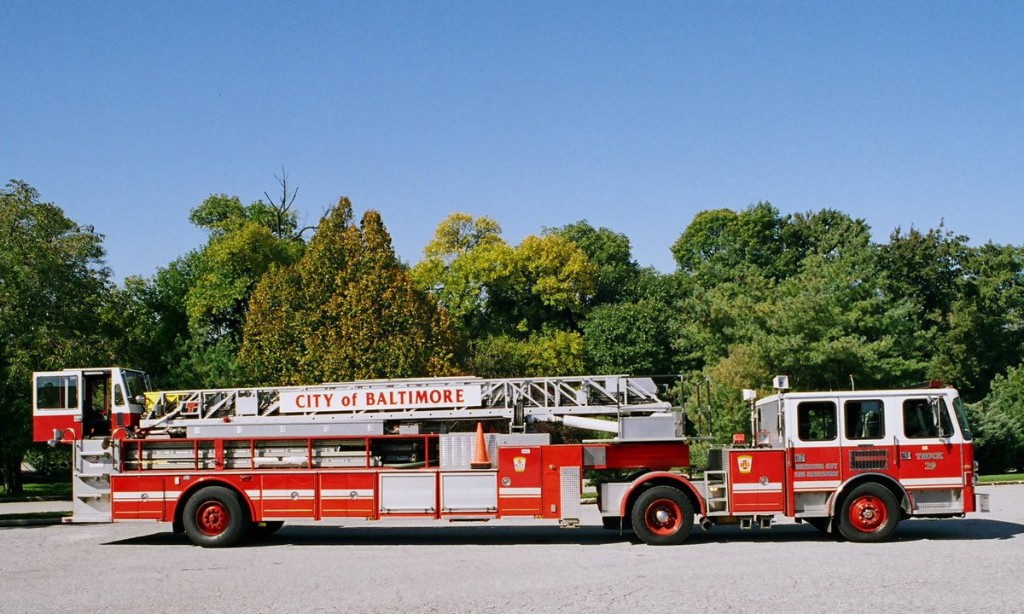 Purchased in 1995, truck 29 has come under fire for its constant breakdowns. (flickr.com)

Campbell and other firefighters cite truck 29 as an example of apparatus that needs replacing. The truck is the oldest in the city’s “first-line” or active-duty fleet, purchased in 1995.

“T29 never has their truck for more than a couple days because even repaired it is a wreck,” said a department insider, who asked for anonymity because he was not authorized to speak to the media.

Truck 29 is assigned to the fire station at 1201 E. Coldspring Lane.

Replacing the old equipment has been a top priority of James S. Clack, who was appointed the fire chief by former Mayor Sheila Dixon in 2008.

Last July, Clack was reappointed by Mayor Stephanie Rawlings-Blake amid a bitter controversy over the closing of two fire companies and the prospective closing of a third unit. 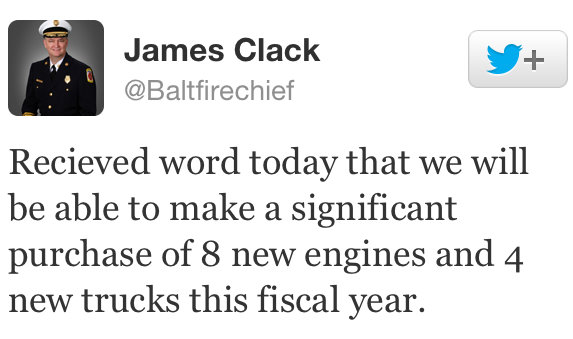 Last month, the mayor said the city had found enough funds ($1.4 million) to permit Truck 10 to stay open. That company operates one of the city’s more modern trucks, a Pierce ordered in 2006.

The new trucks are the first under the Clack regime, but apparently will not be the last.

Although both he and mayor’s office have been noticeably silent about the new truck purchases, Clack said in a recent tweet that he had received word that the department “will be able to make a significant purchase of 8 new engines and 4 new trucks this fiscal year.”

The chief’s spokesman, Kevin Cartwright, said he could not confirm that statement.

Other department officials said they understood that City Hall had authorized four (not eight) new engines, but did not know when they might be purchased.

When to Replace Equipment

Reliable firefighting equipment is one of the most important functions of a local government. But when fire apparatus should be replaced has no common consensus among fire authorities.

One rule of the thumb is that the fleet should average no more than 10 years. Under that standard, Baltimore’s fleet is old but not ancient.

According to union chief Campbell, Baltimore has some unique problems that require systematic fleet replacement.

He cites the high volume of calls in the city – truck 29, for example, responded to 2,020 calls in fiscal 2011 – and the rough condition of roads and alleys as factors that make new equipment a priority, together with top-notch maintenance.

“Some of our fleet needs to be retired immediately,” Campbell asserted, adding that the new trucks are “a big positive” for an agency that has seen a long stretch without new apparatus.

Where the new trucks will be deployed has not yet been determined, said spokesman Cartwright.

A new vehicle, however, may be assigned to Truck Company 1, which serves the East Baltimore area that lost Truck 15, which handled the highest volume of emergency and fire calls in the city before it was closed in July.