They said that when Charlie Parker picked up his alto saxophone, it looked like an extension of his arm. Kevin Donnelly modeled clay with the same casual assurance.

He was equally nonchalant, to the point of self-defeat, about promoting his artworks. Kevin instead devoted his remarkable talent and energy to making his lifestyle a legend.

In that he succeeded.

Kevin Donnelly was found recently in a rear room of his Fells Point home after being reported missed. He was 76. Survivors are his widow, Riley, and their twin sons, Adam and Christian. The body was to be cremated. A memorial service is planned for December.

An artist-sculptor, Kevin was a mid-1960s graduate of MICA’s Rinehart School of Sculpture. Early on, he gravitated to Fells Point where he fit right into the social scrum of long-time Polish homeowners that had refused to be panicked into moving under the threat of the expressway, longshoremen and tugboat crewmen (Fells Point at the time was still a working waterfront), and an invading influx of artists, hippies, probationers, divorcees, moneyed buyers of properties and other assorted refugees.

Everyone mingled and argued in the bars (Kevin’s main arena until he quit drinking and took up smoking marijuana full time). Even in this motley cast of characters, he stood out.

He was of medium height, slender, with ropy muscles. His head was Neanderthal: high cheekbones and a sloping forehead. And he was loud. If Kevin was in the bar, everybody knew it – until he got thrown out.

He had the barroom psychologist’s ability to size up and play to the audience and the Irish gift of eloquence. People gravitated to him. One night Deanna Bogart was playing in the square. “I love,” Kevin announced to a bemused circle, “her lip-saxophone-thoughts.”
__________________________________
Baltimore sculptor John Ferguson assesses Donnelly’s art:

“Kevin had a unique fantasy that evolved around the elongated female form. Some of his compositions were done by taking two of these forms and making them into one. Occasionally, they had more than the God-given number of limbs. This might sound grotesque, but Kevin’s fertile imagination, remarkable technical skills, and the positive influences of Hieronymus Bosch, the Italian modernists, and Wolfgang Beal, his instructor and good friend at Hartford Art School, make his work both thought-provoking and a visual treat.”
_________________________________

Back then, Fells Point living arrangements could be casual. Squatters took over many of the vacant, city-owned properties condemned for the expressway. Nothing if not resourceful, they turned the lights back on after the gas and electric company had turned them off. 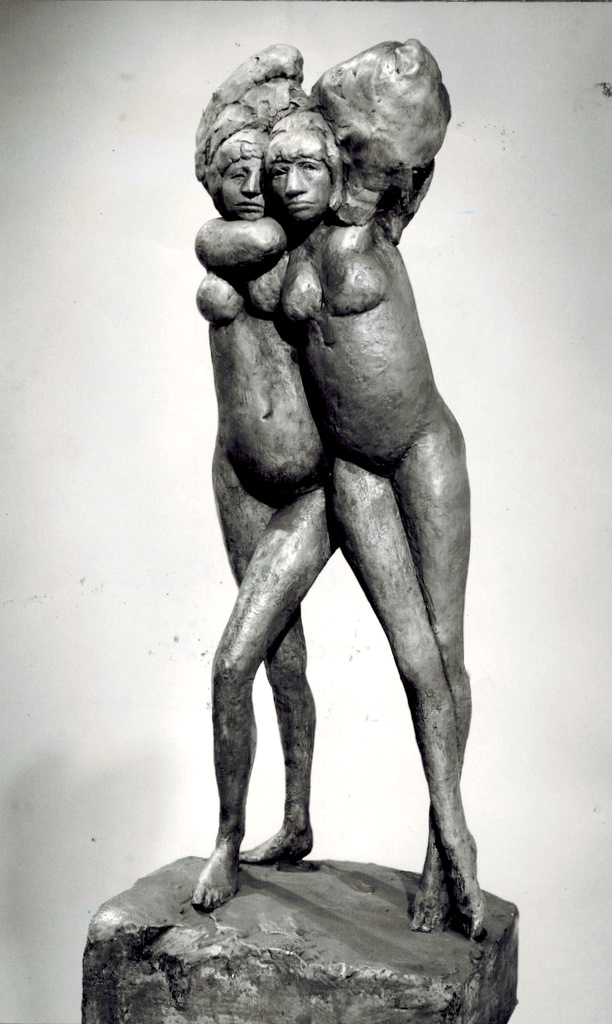 “Large Double Figure” was displayed at MICA. (Courtesy of John and Terry Ferguson)

For a while, Kevin shared a ground-floor storefront on Eastern Avenue with Gordon, a Connecticut friend, and Rabbit, a full-blooded Yaqui Indian from Arizona who dug subway tunnels in Baltimore and around the country.

The scene: early morning, the bar has closed, and Kevin has shepherded several habitués and members of Baltimore’s demimonde across the street to the storefront for a “nightcap,” which nobody needs.

In the middle of the room is a tripod supporting a small rotating table that holds an armature and a mound of clay. Kevin stands there, rapidly applying clay to the metal framework.

Gradually a form takes shape (was it one of his “Rocket Ship Ladies”?), but he’s not even looking at what he is doing, rather talking a mile a minute to his rapt audience.

Kevin’s conversation was abstract. A friend likened it to listening to three different conversations at once. You never got the punch line to the first or second story because he was already off on the third.

One of Kevin’s tales concerned Lenny, a Fells Point hippie and doper who died and was cremated. Some time later, the police raided the house he had lived in, believing it to be inhabited by dealers and addicts. They searched the place. One of them found the metal urn containing Lenny’s ashes, wet his finger, and took a taste. “I GOT IT,” he yelled. Kevin said it would have given Lenny a lift to know that a cop thought his ashes tasted like dope. 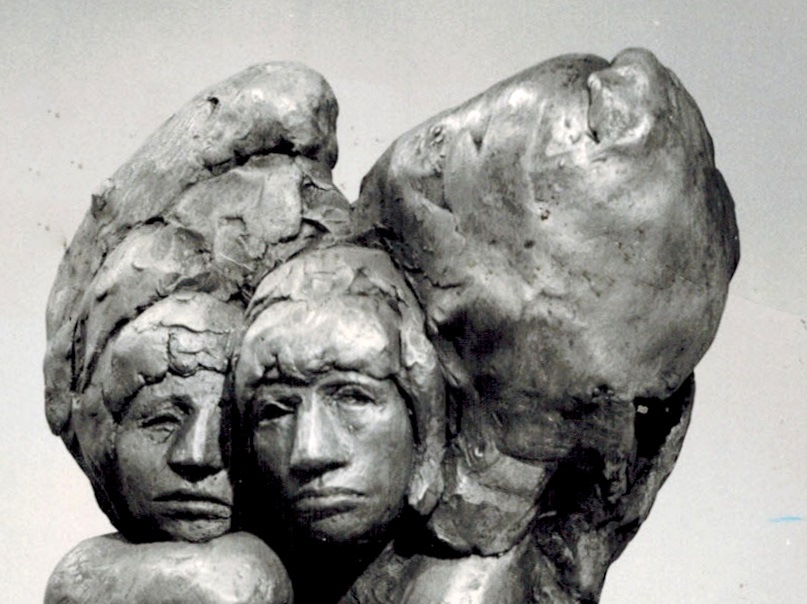 While he never developed the ability to deal with clients (in fact, he threw one out of his studio), Kevin could quickly ingratiate himself with those he wanted to impress and, chameleon-like, fit into the most unlikely surroundings. At Les Halles in Paris, he successfully bid on a side of beef and staggered halfway down the block with it before the real porters marked him as an imposter and relieved him of his burden.

Kevin embodied the concept of non-linearity. He was high-energy, uninhibited as a dancer and in everything else he did. Women found him intoxicating, at least initially. “He just had this incredible rap,” one recalled.

“I like to wake up in the morning and talk to a chick,” Kevin would say. “Nibble on her ear – my little croissant.” 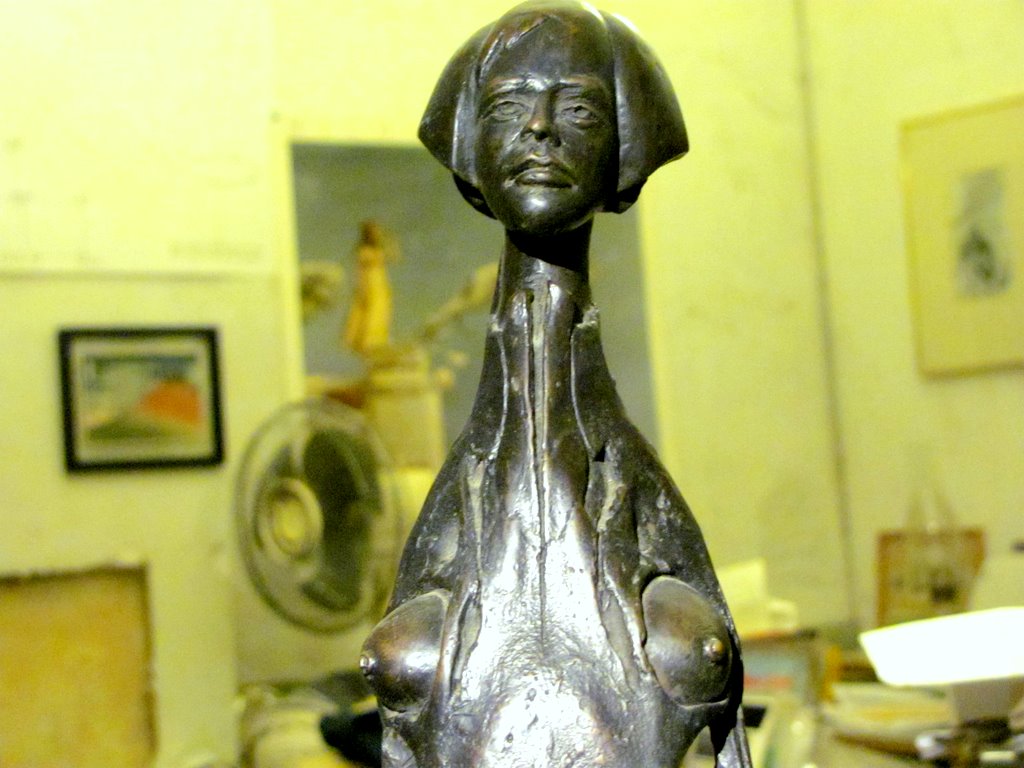 Close-up of the upper half of a figure Kevin modeled and cast in Thailand. (Alan Shapiro, photo by Mark Reutter)

His MO when he was young and agile was to climb up the fire escape and in the window to surprise his latest conquest en chambre. This routine evidently paid dividends until he tried it in Paris – and entered the wrong apartment.

“Sorry, my mistake,” Kevin said, a gnome easing wraithlike past the bed containing the wide-eyed and terrified occupants. “I’ll just let myself out.” Finds the door, races down the stairs, out to the street, and into the waiting arms of the gendarmes who take him to jail.

Unbeknownst to Kevin, a real second story man had been operating in the neighborhood. “Cat burglar of Paris arrested!” screamed the morning headlines. A few days later, the French police contacted Cody, Kevin’s father, in Connecticut. “My son is a fuck-up,” he told them, “but he’s not a thief.”

On to Spain and a construction job pushing a wheelbarrow and laying bricks (he was a demon worker) and to the Mediterranean, cruising on a yacht off Tangier with assorted local ladies and Al Goldstein, editor of Screw magazine.

Then back to Newport, R.I., where he picked up a debutante in a bar, and spent the night with her in a mansion. He appeared, somewhat disheveled downstairs, the next morning: “Do you know how it feels when nobody at the breakfast table will talk to you?” 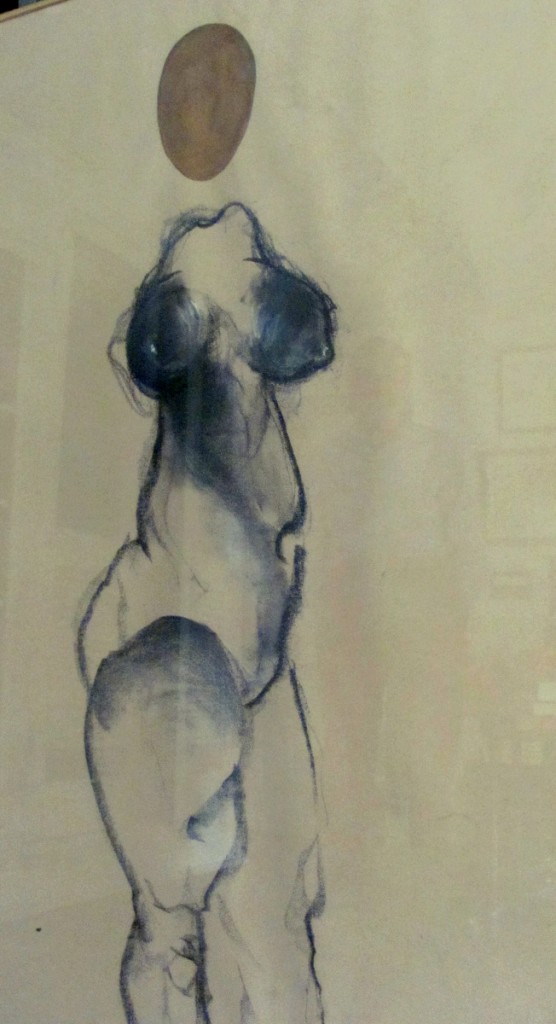 A charcoal drawing, about 40 inches high, dashed off and handed to the author. (Courtesy of James D. Dilts)

Kevin spent his later years in Chiang Mai, Thailand, where a friend from the Maryland Institute had a house and he could live comfortably, if frugally, on his meager Social Security payments. (“I don’t consume much of anything except good will,” he once said.)

He ate rice and noodles, scored dope on his motorcycle and consorted occasionally with the local taxi girls.

When he returned to Baltimore on visits, he looked better than he had in years. He located a foundry near Chiang Mai and began to cast bronze sculptures. They called him “Kevin the Old.”

He returned to Fells Point a few years ago, where he took up residence in an unheated apartment and continued to model and mold his female figures, interrupted by trips to the Sip & Bite for gallons of black coffee and visits to the VA Hospital to deal with a multiplying array of ailments.

“If you live, you burn,” said Voznesensky. Kevin was a forest fire. It’s out now, but we who knew him were beguiled by the spectacle – and always warmed by the flame.
_________________
Journalist, historian and author James D. Dilts could hold his own in the glory days of Harry’s and Helen’s.