At least they can agree on the dirt bikes.

“Dirt bikes are a huge issue. I spend a lot of time focusing on them,” he said, noting that his office had successfully convicted a dirt biker with a 165-day jail sentence.

It was a moment when the Westport Safety Committee appeared to find Bernstein’s words uplifting. Otherwise, Monday’s meeting between the city’s top prosecutor and 12 citizens trying to bring some semblance of order to the streets seemed an exercise not so much in futility as in disconnect.

Disconnect between the cycle of violence and self-destructive behavior in this isolated and impoverished South Baltimore community and Bernstein’s dry lecture on the bureaucratic organization of his office – and, more generally, City Hall’s depiction of Westport as an up-and-coming waterfront community. 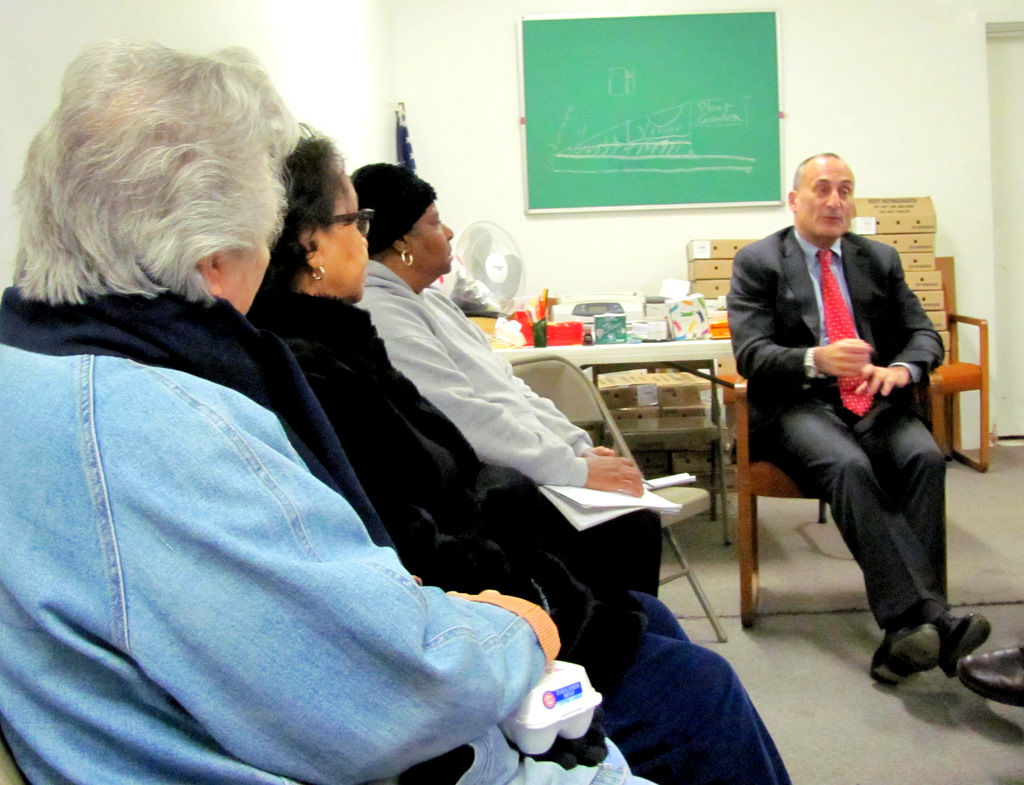 Since September, in a community where Pat Turner’s extravagant plans for $1.4 billion of waterfront skyscrapers, luxury homes and office buildings have collapsed, there’s been two murders, three fatal drug overdoses and continuing neglect by the city, according to residents.

On this Monday evening, Westport was dark and deserted except for some shadowy figures loitering along Annapolis Road, a parallel world that seemed remote from City Hall’s upbeat claims of a rejuvenating neighborhood.

Towe, who organized the safety meeting, praised Bernstein for coming to her small storefront office to talk to residents representing the Westport Improvement Association and TOOUR (Teaching Our Own Understanding and Responsibility).

At the same time, she said Bernstein was the first person from the prosecutor’s office to visit the community groups since the 2010 Democratic primary when he defeated incumbent State’s Attorney Patricia C. Jessamy.

“We used to have a representative of the state’s attorney here,” Towe said, “but then it stopped and both the people [who came to the safety meetings] lost their jobs.” 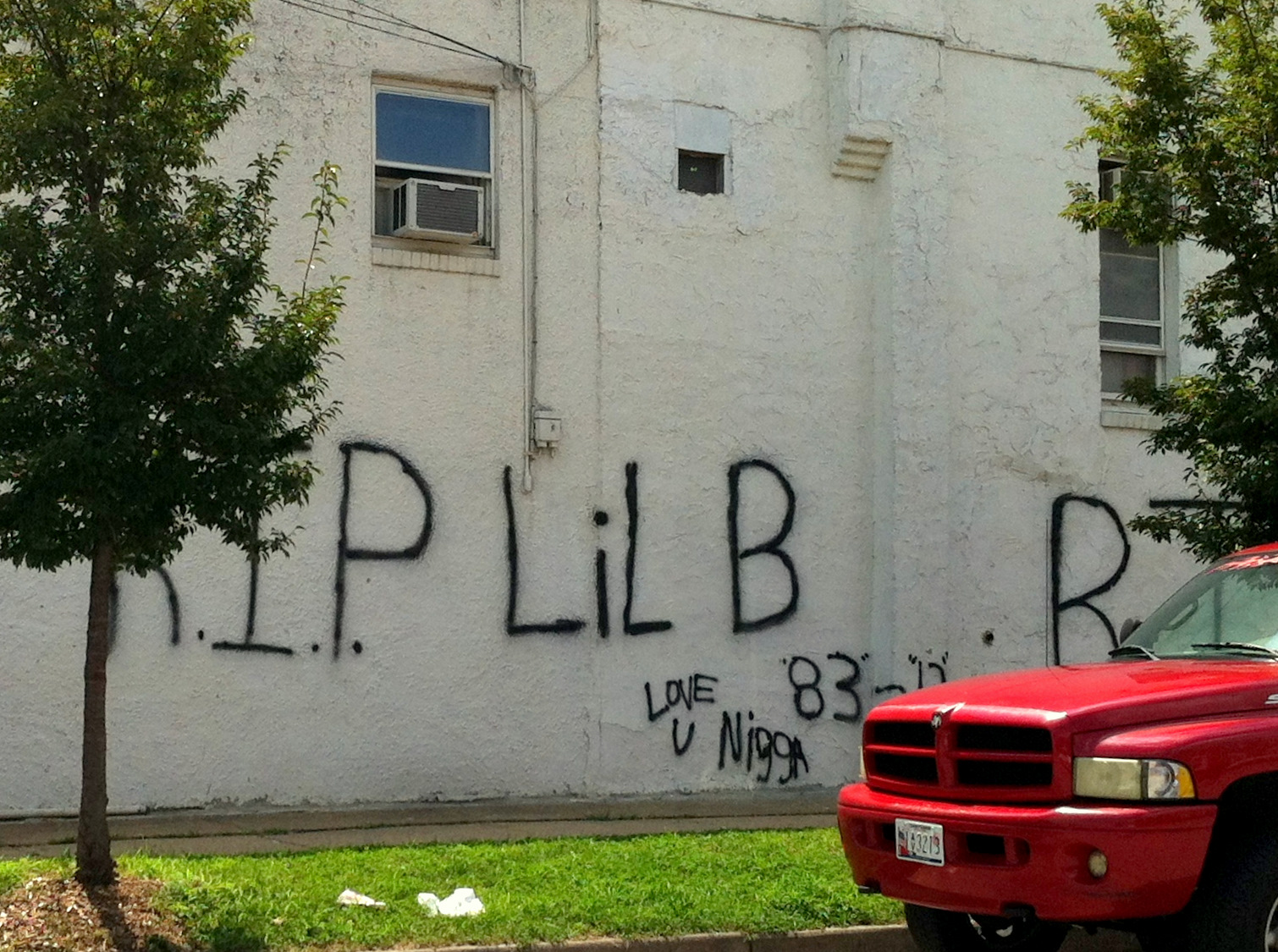 Graffiti on a Westport building commemorates the recent overdose death of “Lil B,” age 29. (Photo by Linda Towe)

Bernstein told the community he had accepted their invitation because he wanted to know what was happening in the neighborhood and have a dialogue.

But Bernstein’s presentation left little room for back-and-forth, and somehow the recent community bloodshed on everyone’s mind before and after the meeting was never discussed.

Westport remains rattled by the deaths of Earl Garrison, 38, killed September 8 around the corner on Kent Street, and “John John” Planters, 21, riddled with bullets in broad daylight just a block from this meeting room on October 25.

Bernstein spent much of his time talking about the progress his office has made as a result of his “community prosecution model.” That approach divides the city into three zones and has prosecutors handle all cases in a zone, rather than divide up cases into felonies, narcotics prosecutions and so forth.

Through this “holistic approach,” Bernstein said, slapping his thigh for emphasis, prosecutors have achieved a 70% conviction rate in the last four to five months and are getting more connected to the communities. “My goal ultimately is for people from these zones to come to these meetings.”

He explaining his other innovations, including a major investigations unit to track down on violent repeat offenders and a prostitution diversion program to encourage women to leave the world’s oldest profession.

It was a monologue that left most of the 12 citizens quiet and without that much to say when he finally called on them for questions. 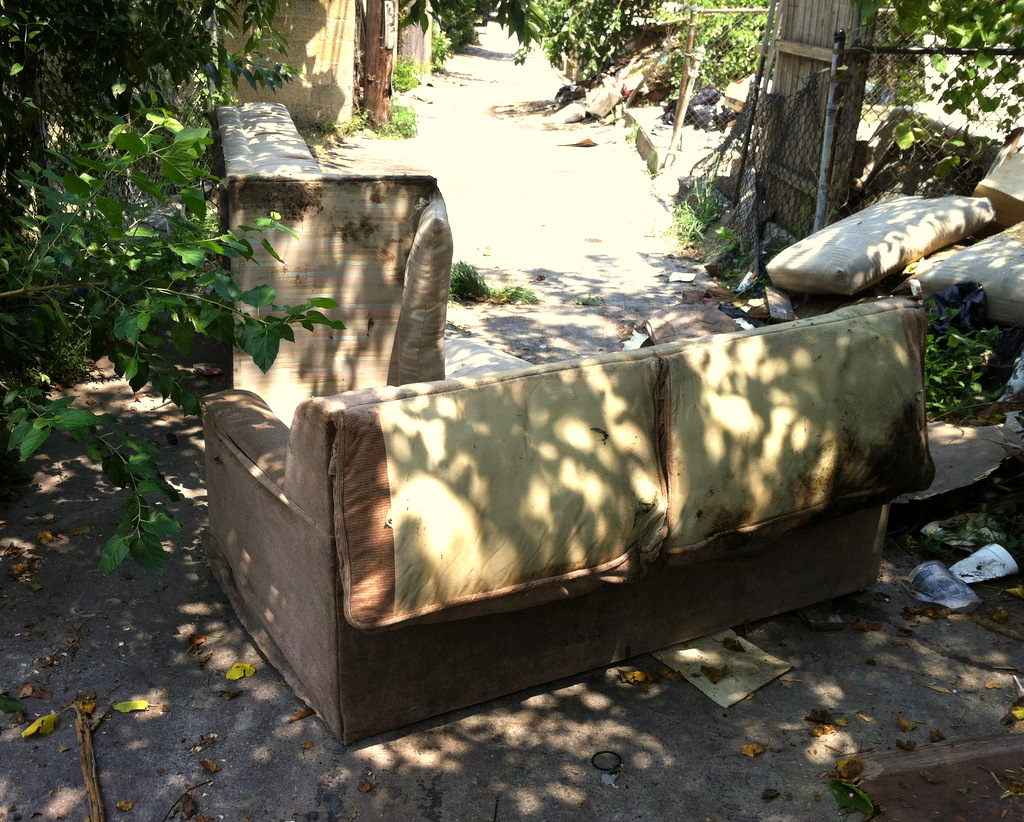 Trash and furniture put in the alley behind Annapolis Road to block the police. (Photo by Linda Towe)

In addition to dirt bikes, the scourge of drugs was foremost on their minds.

Some of Westport’s many vacant houses – a legacy of the brief speculative boom in properties when Turner first announced his plans – are used as makeshift meth labs. “We report this [to the city] and it never goes away. Or it goes to another vacant house,” one resident told Bernstein.

The prosecutor suggested that residents contact the housing department, which has “some folks” who work as special state’s attorneys. Or if that approach fails, he said, give him the addresses, so he can forward them to the proper authorities.

Another resident described the problem of dealers sending out young kids to run their drugs. “We’re seeing it and it’s a dilemma,” the resident said, because the dealer and the children are often connected by family ties.

“Keep calling the police,” Bernstein advised. “The police department makes their deployment decisions based on complaints.”

He said he was considering a comprehensive approach to dealing with the drug problem by involving the health department, housing department and other agencies. He cited a combination of drug-screening programs to help addicts, the mayor’s Vacants-to-Value housing program to reduce the number of boarded-up properties, and community gardens and volunteer patrols as ways to collectively create “sustainable safe zones.”

On that note, Bernstein excused himself, saying he had another commitment, and was out the door with his bodyguard. 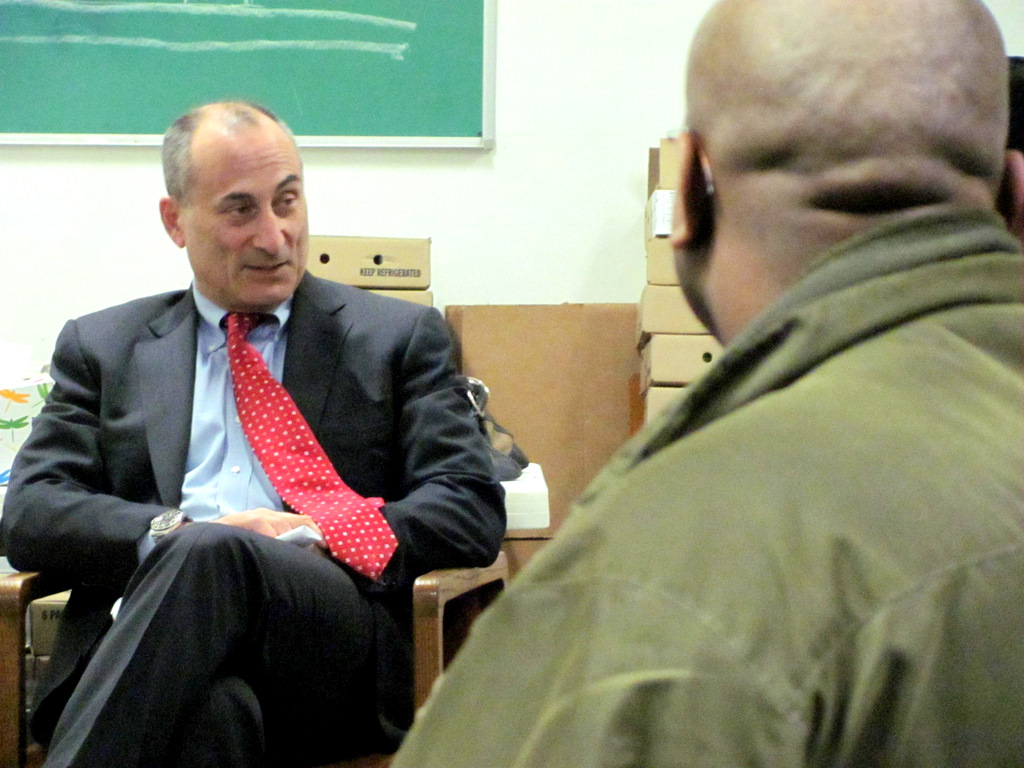 What About the Children?

Back in the chilly meeting room, Linda Towe was saying that crime seemed to be getting worse in Westport. Ruth Sherrill, president of the Westport Improvement Association, disagreed, but only somewhat.

Stabbings, beatings and drug dealing have been a constant for years, she said. What’s changed is that crime has penetrated into the heart of the community.

It flares up from Waterview Avenue to Manokin Street, but is especially concentrated around the Light Rail stop, which lies between a waterfront cleared in anticipation of Turner’s glitzy skyscrapers and rows of modest houses built for factory workers whose factories have long since disappeared.

“It’s the children that really worry us cause the streets are taking hold of them,” Sherrill continued.

“We’ve talked to the city, to our councilman, for years. We’ve asked for a rec center – there’s no rec center for all of Westport! – and for a community center for job-training classes, after-school programs and meetings. We never get anything but the runaround.”