The boarded-up rowhouses and empty lots on East 20th Street would appear to have little in common with the Georgian architecture and lush green quads of Johns Hopkins University, but university officials yesterday pledged to help revive this neighborhood and nine others.

Citing their responsibility to act as one of the city’s “anchor institutions,” University President Ronald J. Daniels and other officials vowed to spend $10 million over the next five years to improve communities near the North Baltimore campus at Charles and 33rd streets.

The announcement of “The Hopkins Community Partnership Initiative” is not a surprise – the program has been in the works for more than a year – but the dollar figure pledged by Hopkins was new.

It comes after many meetings the university organized with representatives of a 200-block swath of the city, including areas suffering from longstanding poverty and population loss, and others, closer to the Homewood campus, that possess a solid housing stock and stable families. 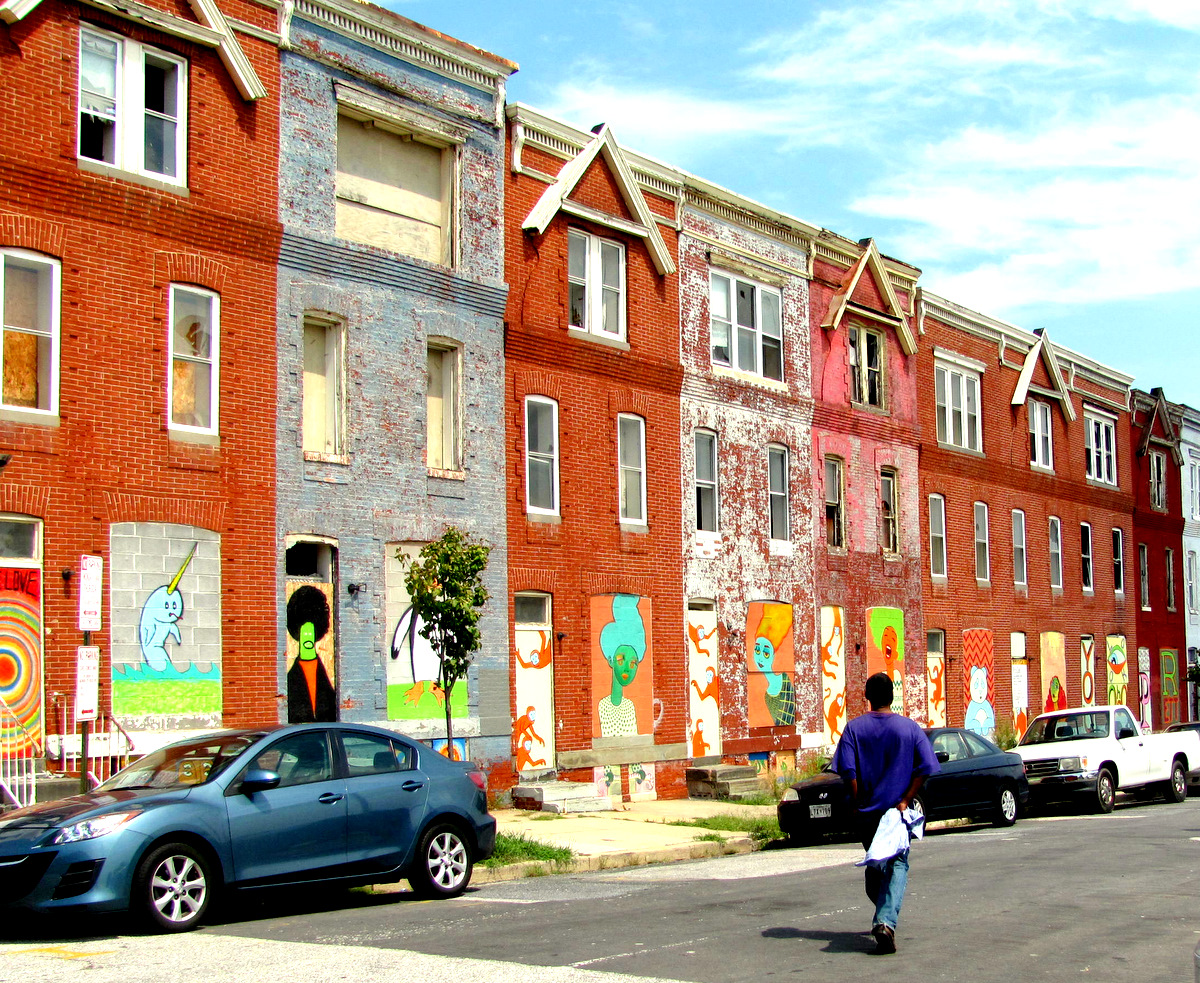 The 400 block of East 20th Street in the Barclay neighborhood. (Photo by Mark Reutter)

“Safe streets, the elimination of blighted properties, development of the local workforce” are interests shared both by the communities and Hopkins, Daniels said. “After all, the future of Johns Hopkins is inextricably tied to that of its community.”

The initiative is much different in scale and scope from the University’s biotech park project near Johns Hopkins Hospital, undertaken by East Baltimore Community Development Inc. That $1.8 billion redevelopment involved clearing large swaths of rowhouses and has provoked continuing controversy over race, city subsidies and neighborhood displacement.

“Hopkins is helping all these neighborhoods get what they want,” said Duff, whose personal hope is that some of the Hopkins funding finds its way to Station North, where his group is hoping to redevelop the former theater building at 10 E. North Ave.

The money pledged by Hopkins would amount to $10,000-a-year for each square block covered by the initiative.

At a news conference on the Homewood campus, university officials were pressed for details on how they would apply the $10 million to tackle their ambitious goals of crime reduction, better quality of life, improved public education, job opportunity for local residents, and residential and commercial development. 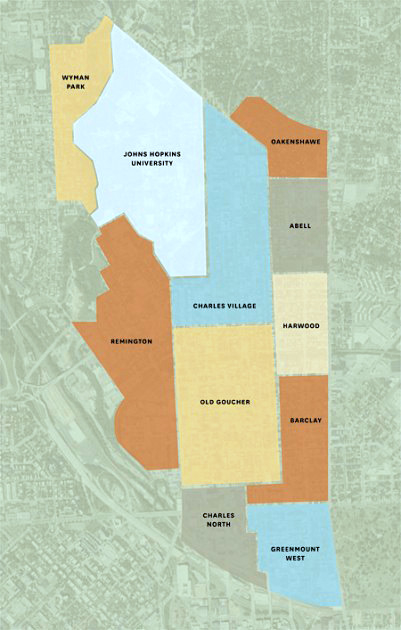 Map of the roughly 200 square blocks Hopkins seeks to rejuvenate. (JHU Office of the President)

One way to leverage investment in local renewal might be “a gap development fund” to subsidize projects, said Andrew B. Frank, Daniels’ adviser on economic development issues and the city’s former deputy mayor for economic and neighborhood development.

The fund could provide “lower cost financing, provided on a ‘but for’ basis,” Frank said, “meaning when we would determine that, without it, [the project] wouldn’t happen.”

(Frank’s “but for” phrasing echoes the formula used by the Baltimore Development Corp. – where he worked as deputy director – in applying PILOT and other tax breaks for commercial developments downtown.)

Other approaches might be grants to assist with community or school projects, or with city initiatives like the mayor’s Power in Dirt program or expanding Hopkins’ Live Near Your Work program, he said.

Asked who would be deciding which neighborhood group or project would receive the funding, Daniels said it would be “an internal working group within Hopkins,” working in conjunction with the community partners.

Daniels said the involvement of the partners would ensure the transparency of the group’s decision-making process, pledging that it would be “a counterpoint to [instances] where these kinds of initiatives go off the rails.”

“We hope to attract $50 million of additional investment,” Daniels said, speaking to a crowd that included many of the neighborhood partners hoping to share in the University’s largess.

The initiative is the brainchild of Joseph P. McNeely, executive director of the Central Baltimore Partnership, who was hired by Hopkins last year to formulate a plan for reviving an area with 22,000 full-time residents, described as 46.2% white and 33.4% African American.

McNeely wrote that the district “is blessed with a wide variety of strong organizations with capable leadership” that have “a long history and considerable success in addressing the same needs identified in the JHU HCPI [Homewood Community Partners Initiative].”

But, noting that these groups have so far been unable to turn around the neighborhoods into a “vibrant urban center,” he advanced a plan promising to increase population by building “new, high-density, mixed-use development where appropriate and desired,” creating “exciting and accessible retail,” promoting “arts and entertainment venues,” and improve amenities to foster “beautiful surroundings, open space, clean public spaces and calm traffic.”

“Dramatically increasing the population of the area – emphasizing market-rate housing and recruiting more affluent residents – is the most critical change and would be the catalyst that drives more and better retail, higher school quality, improved quality of life, reduced crime, and a sustainable attractive environment,” McNeely wrote. 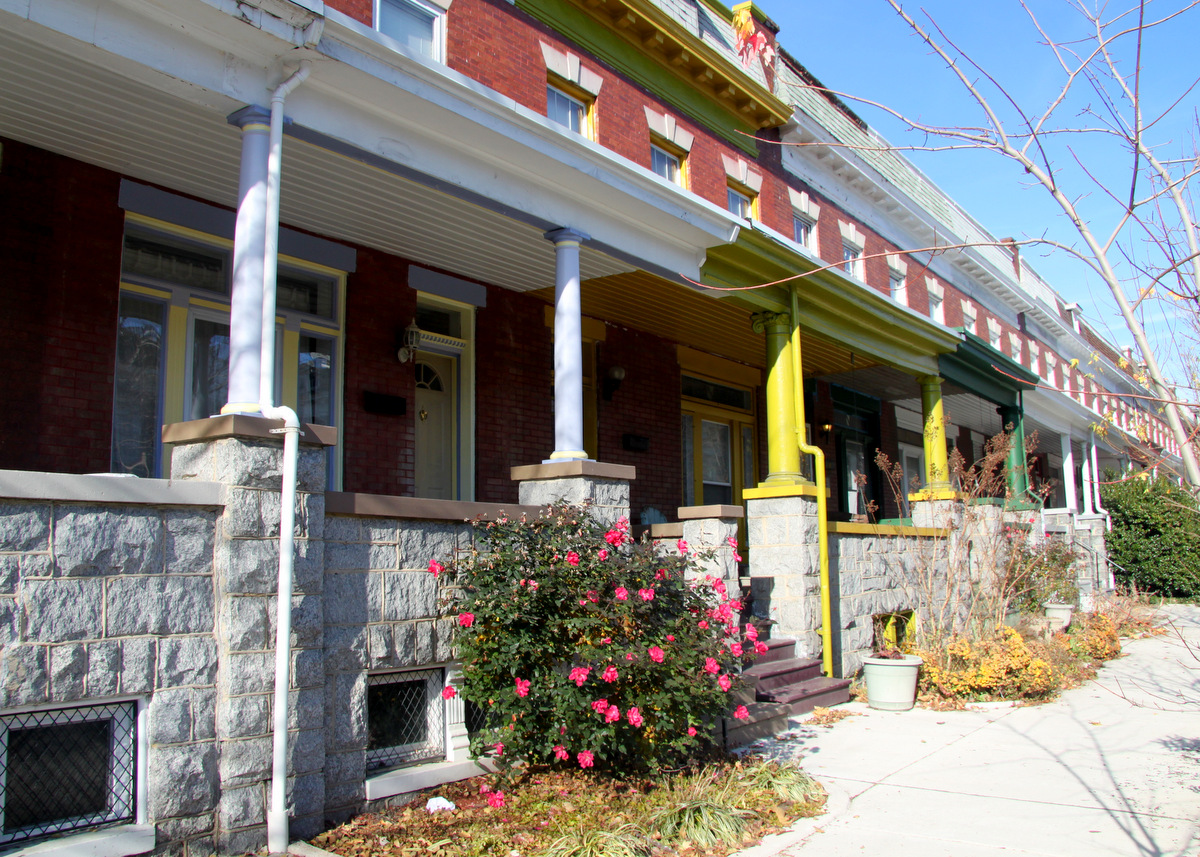 A stretch of Howard Street in Remington yesterday with still-blooming roses and fresh paint. (Photo by Fern Shen)

Greater Remington Improvement Association President Judith Kunst yesterday said she was “very excited about what this could mean for Remington.”

Kunst said she hopes Hopkins would recognize and build on recent improvements in her neighborhood – particularly the renovation on Remington Avenue by Seawall Development of a long-vacant block of rowhouses and, on Howard Street, of a tire shop being converted for use by Single Carrot Theatre and other businesses.

Dale Hargrave, president of the New Greenmount West Community Association, said the money is important. “But more important is the reinvigoration of our partnership with Hopkins and the rebuilding of our city.”

Mayor Stephanie Rawlings-Blake praised Hopkins at the press conference and said the partnership would help with her goal of increasing the city’s population by attracting 10,000 families in 10 years.

“With the leadership of President Daniels, even more [will] live here,” the mayor said. The Hopkins plan has its own population growth goal: an additional 3,000 families in 10 years.