At Thanksgiving, I needed to know how long to cook a range of root vegetables – turnips, parsnips, carrots and rutabaga – with caramelized onions, so I turned to the venerable “Joy of Cooking.”

To my surprise, I found a page entitled “About wild greens, shoots, roots, seeds and berries.” Who knew the classic American cookbook, first published in 1936, had a foraging wild side to it?

I was pleased to see that burdock was mentioned in the J of C because I’d been thinking about digging up and trying the roots of this wild plant, better known for its annoying burrs that stick to dogs’ fur and humans’ clothes.

In fact, Swiss inventor George de Mestral came up with Velcro in the 1940s based on the burdock burr’s clever hook-and-loop system that he saw under a microscope. 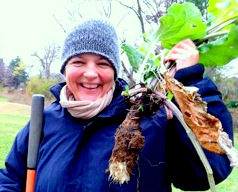 The authors warn that even after parboiling five minutes and cooking another 10 minutes  many of these greens often remain slightly bitter.

“Unless you are working up a real or imaginary survival program, their continued use is of questionable benefit,” they write. “Patience and Lilliputian appetites are a necessary prerequisite,” they say of one of these plants.

Okay, so Irma and Marion weren’t dyed-in-the-wool fellow foragers, but they had a sense of humor and were game to give these “weeds” a try.

Which brings me back to the wonders of burdock root. The Brits famously enjoy it in a dandelion-burdock soft drink (known as “D & B”) and even in a beer. The Japanese call it gobo and pickle it for sushi and use it in a braised carrot & burdock root stir-fry called Kinpira Gobo. (recipe below.) New York foodies are using it for all sorts of  New York foodie dishes. Herbalists consider dried burdock a diuretic and a blood-purifying agent and even the pharmaceutical industry is turning to burdock as “a rich source for secondary metabolites used, for example, against the avian influenza virus.”

Burdock, in the Arctium genus, is abundant in Maryland. The three species here are all non-native, edible and generally considered noxious weeds. I had never knowingly tried them; though I quite possibly ate them pickled in Japanese sushi. I decided it was time to go find some and see what I could do with them. 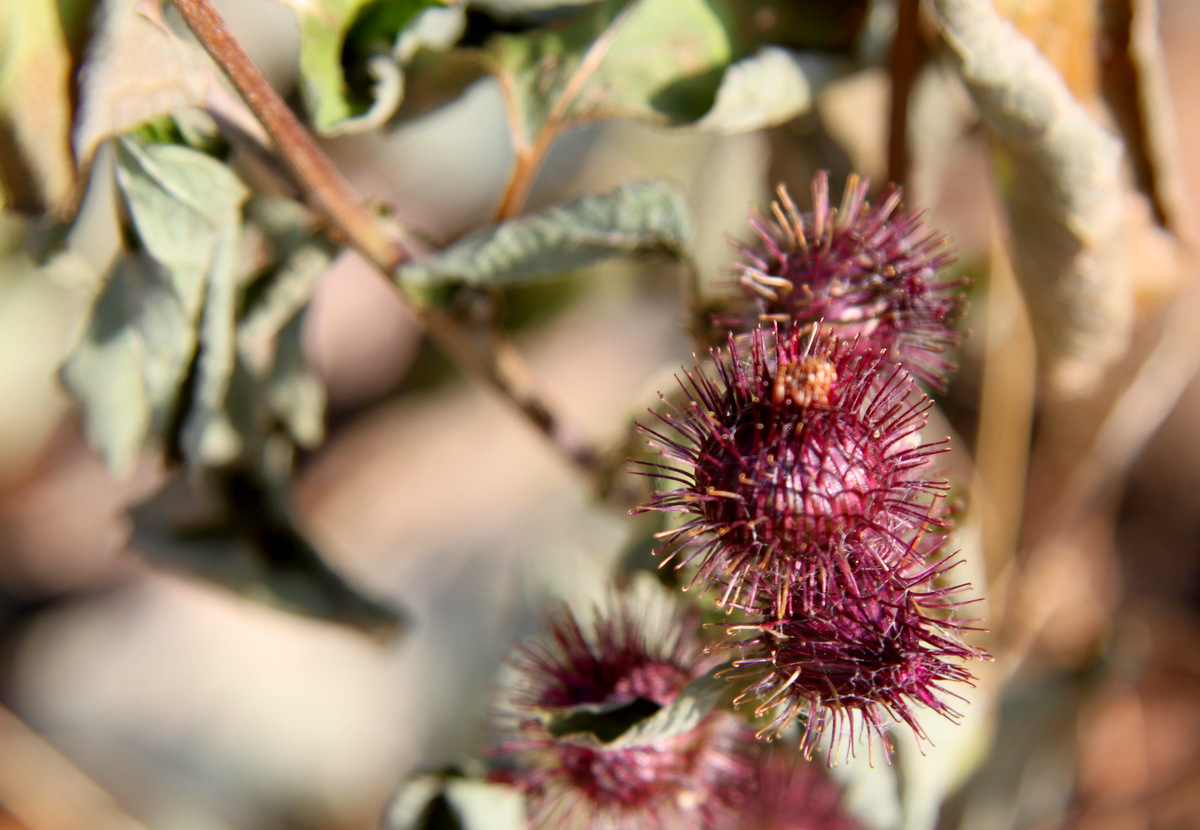 Burdock flowers, which dry into those sticky burrs that cling to fabric and animals’ fur. (Photo by Fern Shen)

On the Sunday after Thanksgiving I met a fellow forager Martha Stauss, at the Wyman Park green along Stony Run.

Right next to where many people let their dogs run off leash there was a large crop of burdock still with clumps of purplish-pink flowers. Figuring that none of the dog owners would grieve the absence of burdock, we got to work with pickaxe and shovels.

We learned quickly that, at this time of year, the roots are very long, soft and break off easily. The pickaxe helped break the ground, but the shovel allowed greater finesse in loosening up the earth around each plant. Still the mighty burdock burrows deep. 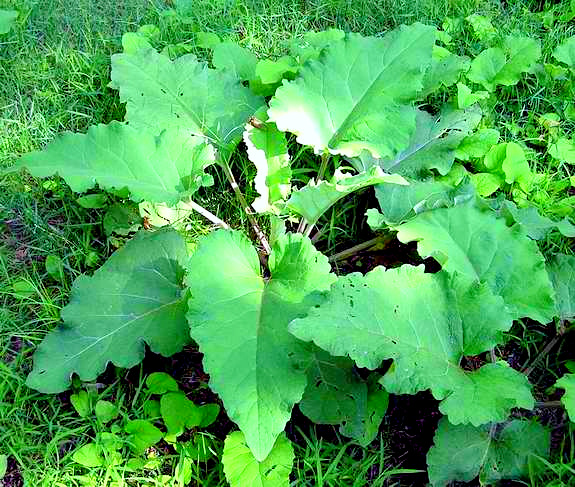 Martha spent extra time shoveling out the buried broken ends, as well as picking off sticky burrs from her hair, cotton gloves, jacket, and socks. (Lesson learned: use leather or plastic covered gloves.)

Within 15 minutes we had a healthy crop of just over half-a-dozen roots.

We did our best to cover up the pits and then split the loot and called in the dogs. (They’d been more interested in each other than digging for burdock roots, though one still managed to get “burred.”)

Back in the kitchen, the Joy of Cooking recommends that burdock roots be carefully peeled prior to cooking and prepared as you would Jerusalem artichokes. (Their recipe involves boiling them until just tender and then dressing them with  butter, parsley and hot pepper sauce.) 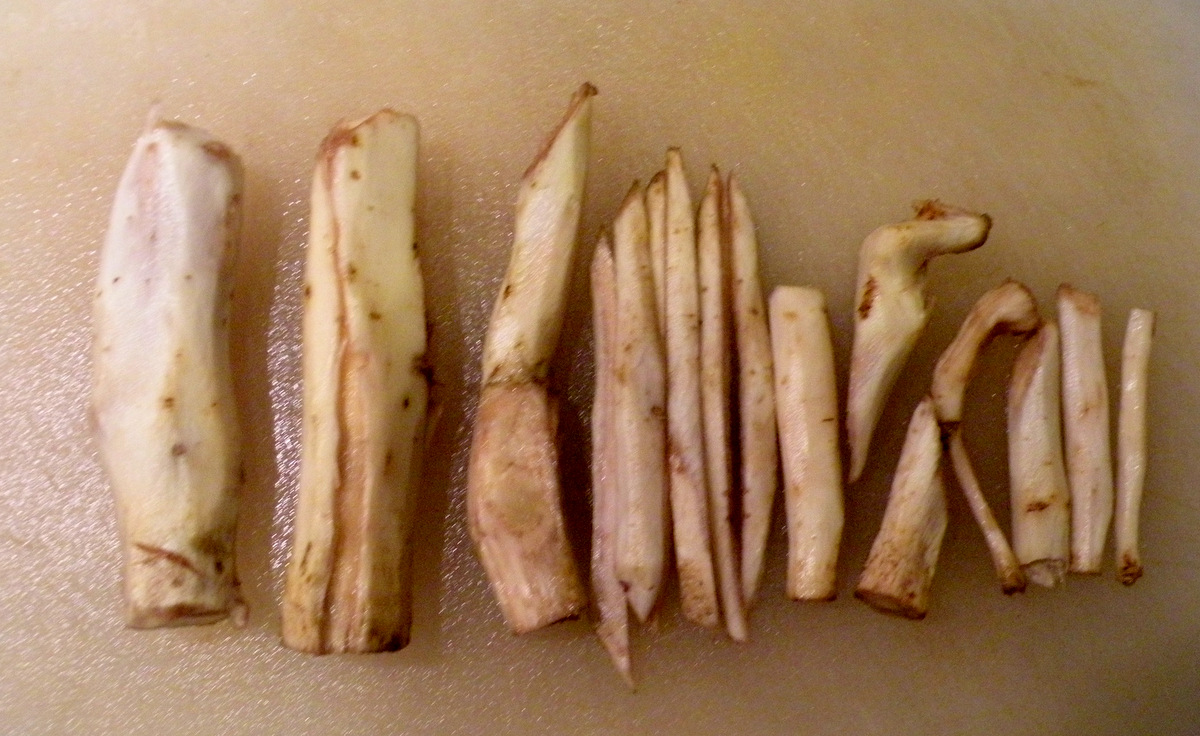 Martha peeled and roasted her burdock rather than boiling it and reported “It got pretty fibrous, but tasted like potato.” She wondered if  her addition of sesame oil and a glaze of liquid aminos might have been the main reason it was tasty.

My own experience with this initial harvest was a bit of a bust – I discovered burdock turns black pretty quickly if not processed upon peeling. But, using burdock dug out of my rather neglected garden, I had great success with an on-line Japanese recipe for Braised Carrot and Burdock “Gobo” Root.

It turned out delicious on rice, with the burdock adding a flavor like an earthy parsnip, almost Daikon-like. The only problem was some of the roots were too woody to eat. (Next time I’ll make sure to look for the youngest, tenderest burdock and peel off the outer skin down to the softer core.) 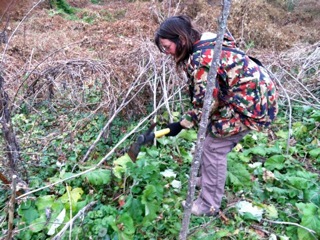 Seasonings
3/4 cup dashi stock
(This is made from a type of seaweed called Dashi Kombu and Japanese bonito (fish) flakes. You can make it from scratch but one can also get ready made packets at Asian markets without much loss of flavor.)
2 Tbsp. sake
1 Tbsp. sugar
1 Tbsp. mirin
1 Tbsp. soy sauce

Instructions:
1. Peel gobo’s (burdock) skin with peeler or traditionally we scrape (peel) the skin off with the back of kitchen knife. (Make sure you peel off the thick fibrous layer.) Then, diagonally slice thinly so that each piece is about 2 inch length. Collect some of the slices and cut into thin matchbox strips. Soak the gobo in water or vinegar water (just one drop of vinegar would do). Change water a couple of times until the water becomes clean. Then leave the gobo in water until you are ready to stirfry.
2. Cut carrots into matchbox strips.
3. In a frying pan, heat oil over medium high and stir fry gobo first. Then add carrot next after you cook gobo for a few minutes.
4. Add seasonings and cook until most of liquid evaporates.
5. When the liquid is almost gone, add sesame oil and sprinkle sesame seeds and the
Ichimi Togarashi (red pepper flakes).