Decorative metal bollards that line the newly finished Jones Falls Bike Trail downtown have taken a battering from unknown assailants, according to the city’s Department of Transportation.

Kathy Chopper, of DOT, says the agency suspects hit-and-run drivers are responsible for the severing of a half dozen bollards, or vertical posts, on the Fallsway north of Chase Street and at Guilford Avenue and Biddle Street. The beheadings took place over the last three months.

The roughly 28-inch-high bollards were installed last summer as the crowning design element of Phase II of the bike trail, which runs 2.5 miles between the Inner Harbor and Penn Station – and cost $2.62 million (including $77,901 in extra work orders from contractor Civil Construction).

The bike trail is separated from car traffic by raised curbing with heavy paving stones and closely-spaced black bollards with ornamental ball tops and fluted shafts.

Chopper could not provide a price for replacing the bollards. “At this time, we are still negotiating the cost,” she said. Similar bollards sold by suppliers on the Internet range from $600 to $750 each.

DOT officials expect the replacement bollards to be installed by spring 2013. By then, they’re likely to need more given the current fatality rate. 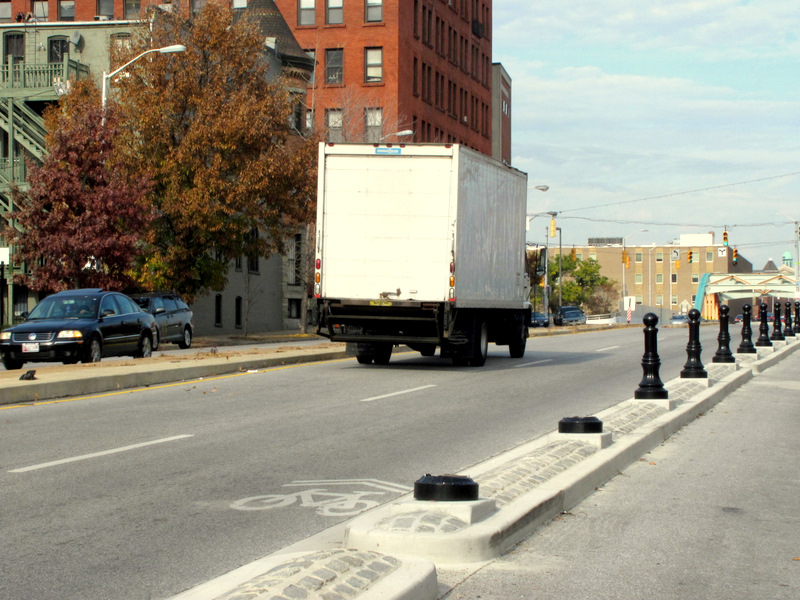 These bollards were destroyed about two weeks ago near where motorists on Biddle Street turn north on Guilford. (Photo by Mark Reutter)