The suicide of a veteran steelworker – despondent over his future following the shutdown of the Sparrows Point mill – has shaken up workers and union officials.

“They just don’t really understand what all of this involving the job did to us,” said one worker on the Facebook page of United Steelworkers Local 9477, which exploded with comments yesterday after the union announced the death of 59-year-old Robert (Bob) Jennings.

“Sparrows Point was not just our job it was our life our family,” wrote another worker, who went on to urge fellow displaced steelworkers to seek help for feelings of depression. “No one will think any less of you for calling and saying hey I am having a rough time right now do you have a minute.”

“Damnit, this shit is messing with everyone,” said one worker.

“I feel like sending the obituary along with a letter to Ira Rennert, Hilco, and the bankruptcy judge [all players in the steel mill bankruptcy],” commented a union officer.

Deborah Jennings confirmed today that her husband shot himself Saturday in a shed on their property in southern Pennsylvania.

“I think he just snapped,” she said. “He was so sorry. He thought he was a failure. You work your whole life for your dream and they take your job away from you.”

Jennings said her husband was terrified that the “dream house” that they had built about eight years ago in Pennsylvania, just north of the Maryland border, would be taken by the bank.

“He talked to the job counselors in Baltimore County and they kept saying to him, ‘Don’t worry.’ To say don’t worry if you have a lot of bills, that doesn’t help. The government keeps raising taxes. Gas goes up, and people can’t make it.” 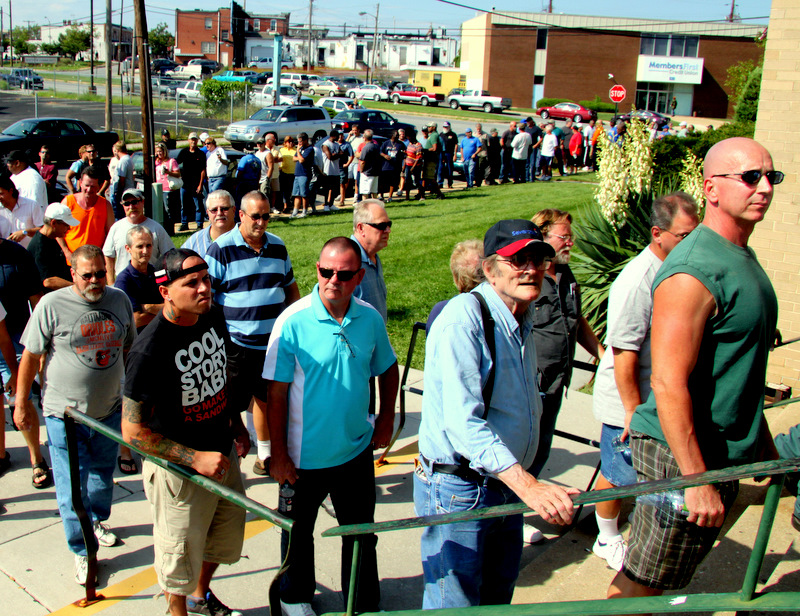 More than 1,000 steelworkers lined up at the Local 9477 Hall on Dundalk Ave. last August to hear that their jobs were gone. (Photo by Fern Shen)

Jennings was well-liked and respected by other members of the close-knit central maintenance department, where he worked for more than three decades, said Joe McDermott, union rep for the department.

“I worked together with him for 22 years. He was a gifted welder. He was a dedicated worker. This is hard to take,” McDermott said today.

Chris MacLarion, vice president of Local 9477, added that he was “very afraid” that the Jennings suicide might not be the last.

“The younger guys can start over. But the long-term employee at Sparrows Point – the guys that came out of the old school – their attitude is, ‘I provide, I provide for my family.’ And now they can’t provide.”

Baltimore County – which is using a $1.8 million federal grant to set up a Steelworkers Assistance Unit in Essex – should consider reaching out to the more than 2,000 unemployed steelworkers with grievance and other psychological counseling, MacLarion suggested.

A number of steelworkers have told him that they are dismayed and confused by the red tape and “foot dragging” in the job search process.

Locals Should Get Demolition Work

According to McDermott, the real need among older steelworkers is not job counseling or long-term retraining, but immediate work. 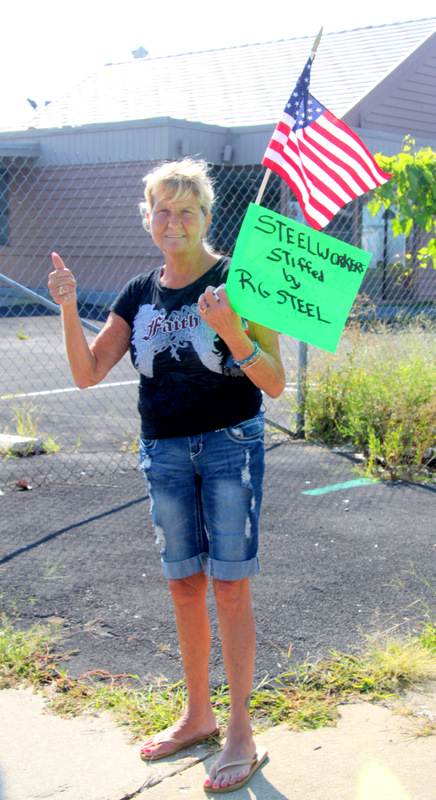 “I am five years younger than Bob, but if I go back to school for two years, I still don’t think I’ll get a job because of my age.”

McDermott said there’s plenty of work in retooling Sparrows Point for future use, such as a terminal for the Maryland Port Administration, where former steelworkers could play a vital role.

When purchasing the property at the bankruptcy auction last August, the Hilco-Environmental Liability Transfer venture freed itself from any obligations to hire ex-RG Steel employees or members of the Steelworkers union.

A handful of ex-employees were hired at a $20-an-hour flat rate to perform several specialized functions, but the Hilco-ELT group has indicated it would bring in out-of-state crews to handle the major demolition, which is expected to begin soon.

“These guys are coming in from Chicago and they want to use their own crews, while people of Baltimore County don’t have work and are hurting,” McDermott said.

Bob and Deborah Jennings were born near the mill at Bowleys Quarters and Back River, respectively. They started going out around 1974 when Sparrows Point employed more than 20,000 workers.

“Bob was a welder in the shipyard and I worked at the Bethlehem Steel metallurgy lab,” Deborah said.

Shortly before the couple wed, Bob transferred to central maintenance, where he specialized in crane inspections and repairs, and Deborah found work elsewhere.

They raised two daughters and saved to buy an acre of land in Pennsylvania to build their “dream house.”

“Bob loved everyone he worked with at the Point,” Deborah recalled. “Nothing bothered him. He was happy.” She said he did not even seem terribly upset at first when he lost his job following the bankruptcy of RG Steel.

But he became increasingly anxious as he faced the job market, which required him to learn computer skills and take a test indicating his skill level. “They give you this crazy, crazy test. He stressed himself out over the test. He passed it with flying colors, but he still didn’t get the approval he needed.”

He still harbored the hope – fanned by union officials – that a new operator would step in and buy the Sparrows Point plant from Hilco.

When that hope was officially dashed last month, he entered into periods of frantic activity followed by depression, according to Deborah. He worried that he would lose his unemployment benefits if the federal government fell off the “fiscal cliff.” He fretted that paperwork had not come through for a course he wanted to take at the York County (Pa.) School of Technology.

Deborah said he left a note behind saying he loved her and asking her to call 911.

“I hope he doesn’t die in vain,” she said, saying that her heart goes out to other former steelworkers and their families who are facing difficult times.

EDITOR’S NOTE: Robert Jennings’ daughter, Jeanne Jennings, put these comments on our Facebook page. With her permission, here they are, slightly edited for length.

I am the daughter of Robert Jennings. I truly want to thank you for writing this article. I really hope this article can give others strength to seek help before another tragedy takes place.

My father was a very hard working man. He worked his whole life to provide for my family. All he wanted was to retire and enjoy his life. He very much deserved to live the rest of his life living happily with his family.

After my father lost his job, he began to feel like a failure. He was afraid to lose the things that he worked his whole life for. I just wish he would have given my sister and I the chance to provide for him, like he had always done for us. I feel like a failure because I will never be able to repay him for the wonderful life that he had given us.

Please, people, if you are feeling depressed please seek help. Things get better, and really are never as bad as they may seem. Our family has been torn apart. I can’t even begin to imagine my future without my father.

Now it is too late. But it isn’t too late for some families who may be having the same feelings, though. Please I urge you to seek help because suicide is not the answer. I would give anything just to hold my father again and tell him how much I love him and tell him that he was my hero. I love you daddy and you will always be with me in my heart. I have always been so proud to be your daughter.

Thank you again for writing this article. I truly hope it helps other families.

Mark Reutter, who wrote the definitive history of the Sparrows Point steel mill: Making Steel: Sparrows Point and the Rise and Ruin of American Industrial Might (2004), has been covering the mill for The Brew. He can be reached at reuttermark@yahoo.com.