In Annapolis and Washington, the debate over what to do about guns in the wake of the Newtown mass shooting has gotten tangled in the viability of legislation addressing the emotional and politically charged issue.

Their focus on measures that could keep guns out of the hands of high-risk individuals points to a wide range of approaches, not all of which require an act of Congress.

Just 1% of gun dealers, for example, are responsible for 57% of guns traced to crime, according to Jon Vernick, an associate professor and associate chair in Health Policy and Management at the Johns Hopkins Bloomberg School of Public Health.

The gathering of more than a dozen experts in gun violence, including law enforcement officers and policymakers as well as epidemiologists, reviewed data from research involving everything from suicide and domestic partner violence to age-based gun possession restrictions.

New York Mayor Michael R. Bloomberg, who opened the summit, called for more such evidence-based study and condemned as “egregious” and “outrageous” national restrictions on funding for gun violence research.

“Congress has no business dictating what public health issues scientists can and should study,” he said. “What are they afraid of?”

Many of yesterday’s speakers had war stories from the world of law enforcement, as investigators struggle to pursue criminals by tracing crime guns’ purchasers.

Presenter Pete Gagliardi, a former officer for the Bureau of Alcohol, Tobacco, Firearms and Explosives (ATF), detailed a example from Chicago where cartridge casings collected from a crime scene were matched – eight years later – to the gun they came from. The gun was finally traced to the shooter’s girlfriend who had bought it on his behalf. 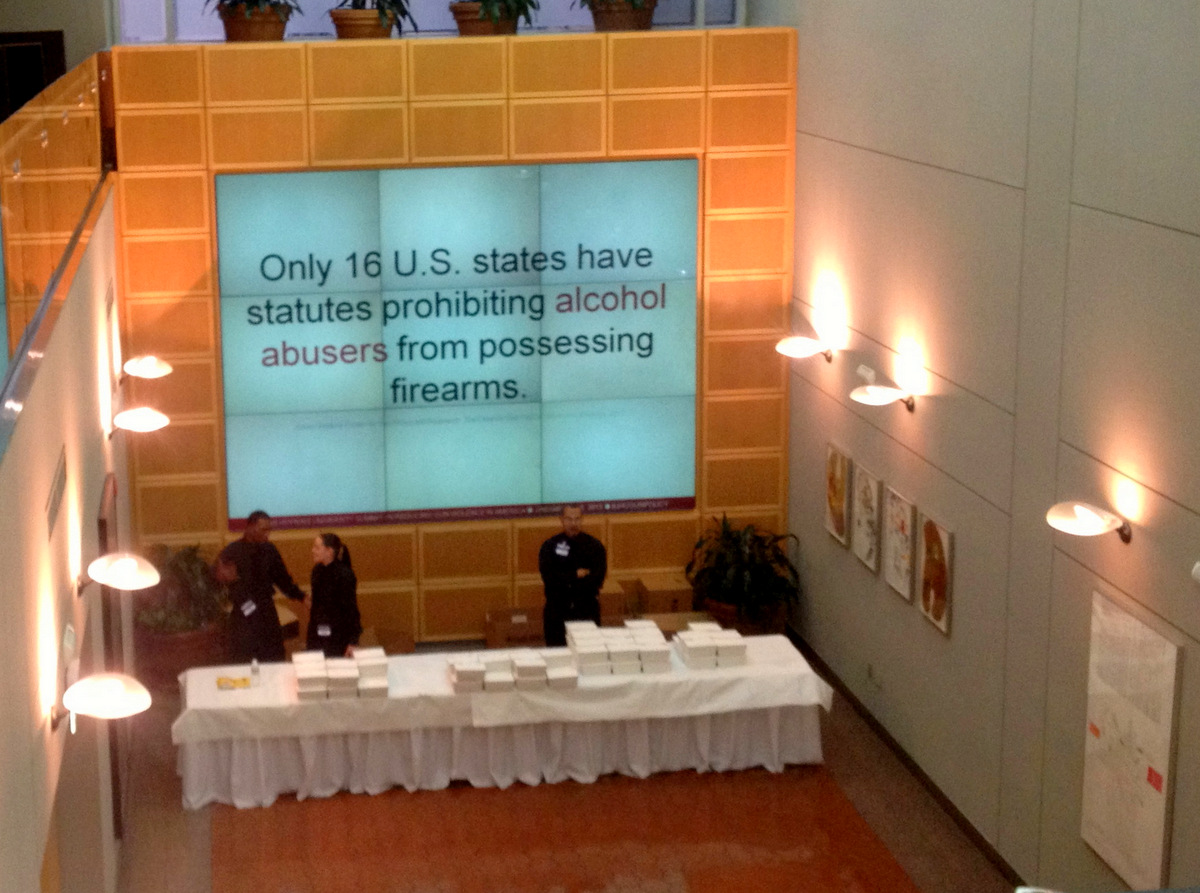 Today the shooter “is where he belongs, serving the rest of his life in the Illinois Correctional System,” Gagliardi said. “That’s a good day. It doesn’t always work that way.”

The issue facing law enforcement officers is that after a gun dealer sells a firearm, subsequent private sales of that same gun are difficult or impossible to track.

“Approximately 40% of all firearms transactions in the United States involve private sales,” said Dr. Garen J. Wintemute, Director of the Violence Prevention Research Program at the University of California, Davis.

Thanks to the lack of a paper trail, secondhand transactions are especially attractive to those who plan on committing crimes using the weapon.

“If you ask incarcerated felons who committed a crime, ‘where did you get your gun?’ 80% of those criminal transactions occur in the secondary market, or private party transfers,” Wintemute said.

While an officer can potentially track a firearm over a handful of private party transfers, occasionally a gun can move so quickly that it gets lost in the shuffle.

Dr. Anthony A. Braga, Professor of Evidence-Based Criminology in the School of Criminal Justice at Rutgers University, had just such a story about a zip code-hopping pistol with a mean streak.

“There is this legendary firearm that was recovered in a crime in the city of Boston,” Braga said. “Boston PD did the ballistic imaging … and it came back to 14 other crimes in four cities in two states in a one year period: an incredible amount of harm for just one firearm.”

Vernick, focusing on the problem of rogue gun vendors, argued that state as well as federal laws requiring vendors to be licensed would give law enforcement more leverage.

“If states are able to inspect those gun dealers and identify problems they can pull the state license without having to wait for the Federal Bureau of Alcohol, Tobacco and Firearms to do something about it,” Vernick said. 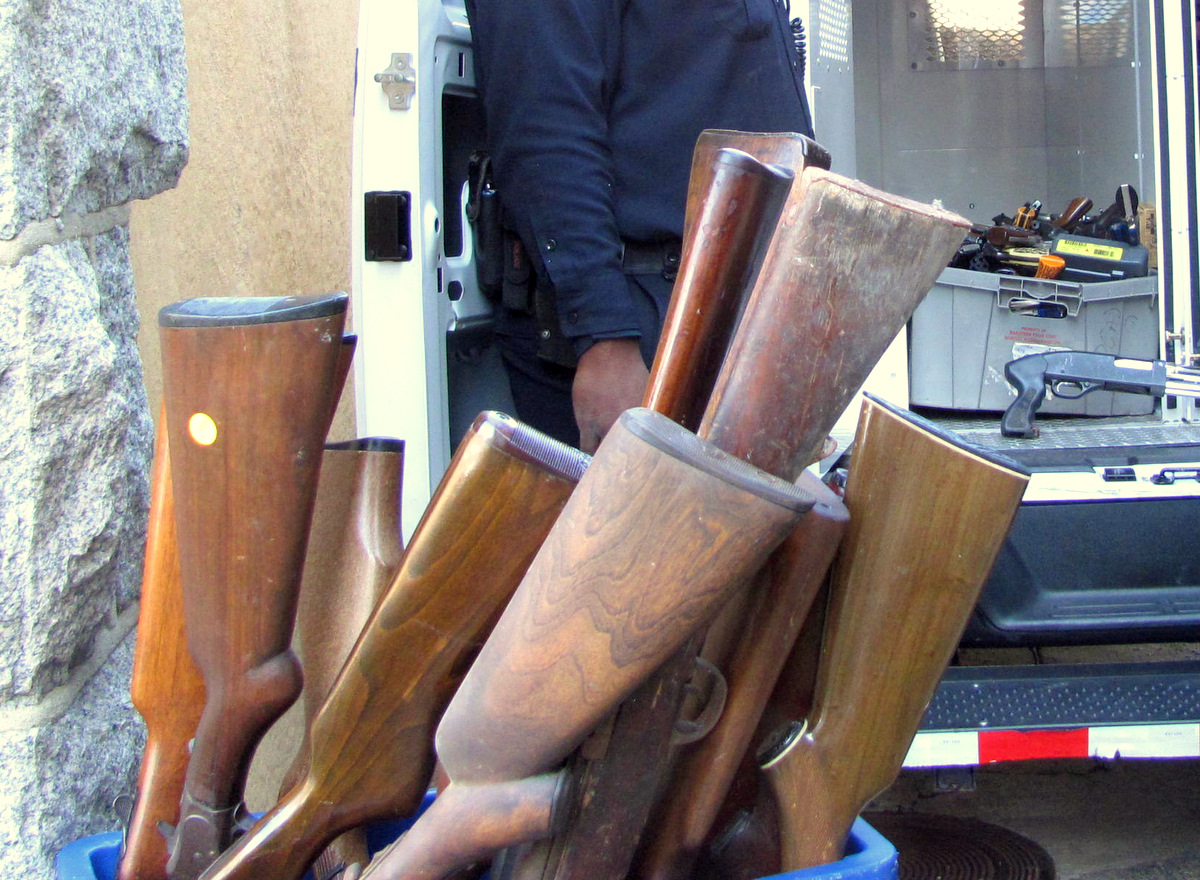 Some of the shotguns collected last month at a “goods for guns” exchange in Northeast Baltimore. (Photo by Mark Reutter)

Maryland is one such state that requires a state-issued license to sell firearms, but nearby states like West Virginia and North Carolina do not have the same requirement. The weaker laws in these states allow guns to be easily purchased and trafficked into Maryland, he said.

Beefing up the ATF’s budget, increasing penalties on those caught trafficking guns illegally, removing obstacles to the effective investigation of gun trafficking crimes, and furthering research that evaluates the efficacy of strategies designed to keep guns out of the wrong hands.

During the summit yesterday, Mayor Bloomberg, a Hopkins graduate and founder of  Mayors Against Illegal Guns, released his seven suggested measures to reduce gun violence.

• Limit the availability of military-style weapons and high-capacity magazines.

(The above measures would require support from Congress and the White House, but there are others, Bloomberg said, that President Obama could implement on his own:)

• Appoint a head to the ATF.

• Stop support of the so-called Tiahrt Amendment, which bars the ATF from releasing information from its firearms trace database to anyone other than a law enforcement agency or prosecutor in connection with a criminal investigation.
__________________
To watch the summit proceedings live online

Organizers noted that the research presented at the summit is going to be published in book form in a couple of weeks, in a volume to be published by the Johns Hopkins University Press.