Standing on their own eight-yard line with a tenuous 34-29 lead late in the fourth quarter, the Ravens defense faced their biggest challenge of the season. As they looked into the eyes of their opponents, they saw a younger and stronger version of themselves.

Haloti Ngata was out of the game with an injury. The defensive line stood gassed and gutted in a fitting end to the Ray Lewis’ era – one final goal line stand.

“Bend, don’t break,” yelled Danny Glazer from Pikesville who was sitting behind me. “Watch the sneak.”

The Niners gained two yards on a run and then twice tried to pass into a tight window in the right corner of the end zone without success.

Season of Loss and Redemption

The game in so many ways was a microcosm of an incomprehensible Ravens season filled with loss and redemption, darkness and light, brother against brother and so many story lines you could write an epic novel and still not capture the nuances of it all.

And it all came down to one play.

“Give the ball to Gore,” pleaded Wyck Knox, a 49ers fan from Charlottesville, VA.

The raucous din was so loud inside of the faded and outdated dome that you could not tell which team’s fans had the upper hand.

Ed Reed roamed to the right corner just before the snap. An unhinged Kaepernick overthrew receiver Michael Crabtree and the Ravens had held on to become World Champions for a second time in their seventeen-year history, 34-31.

Outplaying Peyton Manning, Tom Brady and Kaepernick along the way, Joe Flacco was once again brilliant for the purple and black and his performance garnered him MVP of the Superbowl.

The Raven nation had invaded New Orleans with a sense of purpose and quickly conquered the French Quarter and surrounding areas. 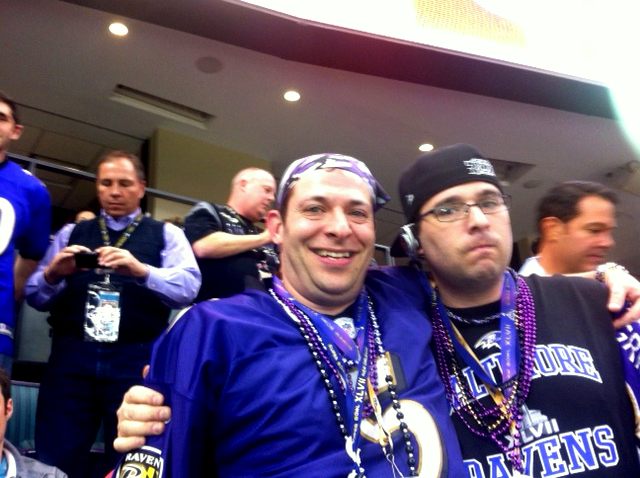 Ravens fans who flocked to New Orleans underwent a flood of emotions as the 49ers surged in the second half. (Photo by Dean Bartoli Smith)

They came from Baltimore, Bel Air, Greenspring Valley and from around the country to leave a purple mark on Bourbon Street. Their football team dominated the 49ers for more than 30 minutes in a stunning display of offensive prowess and stingy defense.

They started the game in a fury and squashed the 49ers first drive. They scored quickly on a strike from Flacco to Boldin to draw first blood.

Jersey Joe also found Pitta for a score and reprised his Denver rainbow toss to Jacoby Jones for a 56-yard touchdown pass. Jones opened the second half with a 108-yard touchdown return. Aside from a fake field goal attempt that went awry, they played flawlessly.

For one half, there was no team in the world that could match their ferocity. They led 28-6 and the Niners fans in my section were quiet and sitting down. Their dreams of a Lombardi Trophy on the banks of the Mississippi had turned into a nightmare.

Then the lights went out in the Superdome. 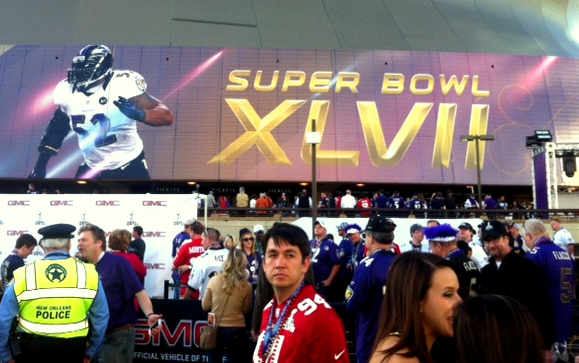 Fans inside the Superbowl before the lights conked out. That’s #52 Ray Lewis on the marquee.  (Photo by Dean Bartoli Smith)

Some fans claimed it was the ghost of Katrina. Others said it was a gift to Roger Goodell for ruining the Saints’ season. Texts claimed that the Ravens had knocked the power out of the Superdome.

“This place is a dump compared to M&T Bank Stadium,” roared Glazer. “Bring back the finger lights they gave us for Beyonce.”

The players were stretching on the sidelines as though prepping for an aerobics class. Trying to stay loose. When play resumed, they looked as flat as they had in the last weeks of the regular season.

The 49ers suddenly discovered their power source, reeling off 17 straight points to trail 28-23. They moved the Ravens all over the field and it was though they had switched uniforms with the team from Baltimore.

In the end it was Joe Flacco who took center stage as the new leader of the franchise. He kept his composure and sustained two drives that resulted in field goals to preserve the victory.

“We never make it easy,” Joe Flacco said. “It’s the way the city of Baltimore is, and that’s the way we are.”