The words “civic engagement” are the stuff of academic symposium titles and armchair posturing about the salience of citizen action. But the words actually mean something to me. Maybe it comes from having been transplanted as a nine-month-old to a foreign country, but I think it’s important to put down roots.

I am a naturalized citizen (1976). I am also a relative newcomer to Baltimore (1999) and to Hampden (2008). I don’t take the privilege of living on U.S. soil or this particular patch of it for granted. That’s one reason why I care so much about my neighborhood public school.

Which brings me, or brought me, to the most recent general meeting of the Hampden Community Council last week. I was there on behalf of the new vice president of my neighborhood school’s PTO to invite the community to an open meeting later this month.

I had hoped to leave after making my 30-second pitch. I wanted to get home to my family. But the auditorium of the Roosevelt Rec Center was packed, fuller than I’d ever seen it.

I was trapped – and also a little bit curious – so I dug in for the duration.

As it turned out, about half the people in the room were there to wrestle over the issue of whether the Academy for College and Career Exploration (ACCE), housed at the former Robert Poole Middle School on West 36th Street, could build a greenhouse on the edge of school property.

The nontraditional high school, which had already dug up three-quarters of an acre of asphalt to build a working urban farm, wanted to build a “hoop house” so it could run an agriculture-related curriculum through the winter months.

Some vocal neighbors who live behind ACCE on Berry Street would have none of it.

I endured every last word. I tasted the bitter juice of anger from the homeowners. I heard their views characterized by others as “ignorant.” I heard two neighbors shout, “Don’t call us ignorant!”

Several residents scoffed at the suggestion that the hoop house was about more important things – like America catching up to Europe’s environmental standards – than the 16 parking spaces that some of the homeowners said were removed by the project.

The fact that the parking would be replaced space-for-space – and which were always on school property, i.e., not for use by the general public – was not enough for some residents, who said they really like to park right in front of their homes.

Thanks to all the hoopla over the hoop houses, ACCE has stopped construction of the hoop house – a big loss for the program and the students who benefit from it. Given that no city permit was required, ACCE could have gone on doing what it was doing without breaking the law.

They stopped because they realized that they couldn’t risk ignoring their critics, some of whom, Principal Quinhon Goodlowe said, had leveled threats. (This claim was met with outraged denial by some residents.)

As the meeting sputtered to a close, someone, maybe City Councilman Nick Mosby, said that Michael Sarbanes’ Office of Engagement at Baltimore City Public Schools had called in an impartial, outside mediator to broker an agreement. It’s become that much of a headache. 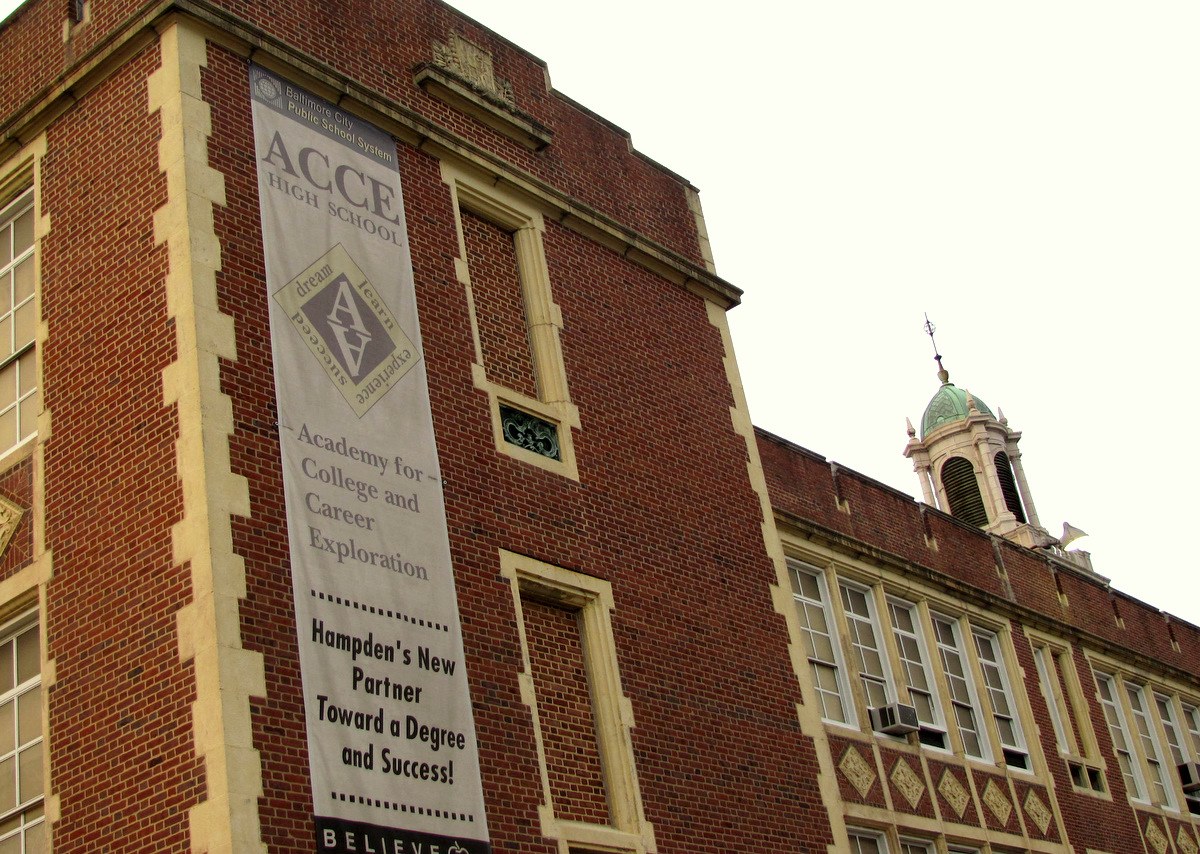 The Academy for College and Career Exploration (ACCE) is a nontraditional public high school. (Photo by Mark Reutter)

After a week of marinating, my own perspective on the meeting has developed a more subtle flavor.

Yes, there was griping about mosquitoes, water runoff, fire truck access, and marred views (because who wouldn’t rather look at a parking lot than a greenhouse?!) But no one at that meeting argued that greening wasn’t a good thing. Gardens weren’t the issue.

The real issue was neighbors failing to communicate. And when I say neighbors I include ACCE.

When permitted to speak by a man who didn’t want to stop talking over her, ACCE co-operator Karen Sitnick – after exasperatedly calling the man “so rude” – admitted as much. She conceded that ACCE did not do enough to get the word out about their plans.

So this is not a story of Hampden’s Don’t-Tread-On-Me NIMBY neighbors coming out against school greening. The story (which happened to coincide with the eve of the 50th anniversary of Robert Frost’s death) was about the need to mend fences.

That need is particularly strong for schools like ACCE. That is, nontraditional schools with citywide enrollments.

ACCE enrolls high school students from 29 zip codes. As much as its operators might like it to be, it is not a neighborhood school. It does not serve Hampden. The residents on Berry Street don’t know the kids at ACCE. The kids don’t know them.

Which is why a young citywide school located in a neighborhood thick with local pride is bound for the kind of trouble that bloomed at the Roosevelt Rec Center last week.

The relationship between citywide schools and their neighborhoods is not one either party necessarily chooses. If that relationship grows to be symbiotic, it’s because someone bothers to start cultivating it.

And none of the urban farmers in the room did that work. ACCE did not lay its vision out on the table and genuinely open itself to neighbors’ feedback. They came to the meeting with what seemed to be an expectation that the Hampden Community Council would approve their hoop house plan and enable them to sidestep a few “nutty” opponents.

Flyers left in screen doors are not enough. To build meaningful relationships, schools need to send leaders across the street to talk one-on-one with their neighbors. They need to ask residents what they feel is important, and they need to listen. These relationships can’t be initiated successfully in groups or at public meetings.

A knock on a door, a follow-up phone call, a few one-on-ones with a few dozen people – that’s how I think you start building a community around a school.
_________________
Edit (ee-DEET) Barry lives with her husband and son in Hampden. Committed to making neighborhood schools a top choice for all families, she is the founder and editor of the blog, Re:education in Baltimore: A city mom thinks outside the sandbox.