Birroteca is exactly the right name for Robin Haas’ new venture in a renovated 19th century stone mill on Falls Road. It’s a play on enoteca, an Italian word for a wine shop specializing in local wines and sometimes-local food as well.

At Birroteca there are over two dozen craft beers on tap, as well as Natty Boh. The wine list is also extensive and has a good ‘by the glass’ selection. (I would love to see Maryland vintners rotated on the list.)

But it was Birroteca’s contemporary Italian menu that most intrigued me – it’s very engaging and each dish is thoughtfully described. I was eager to check out this eatery that opened with big buzz a couple of months ago in a tucked-away spot down by the Jones Falls.

My favorite appetizer, so far, is calamari alla plancha, with olive oil, lemons, capers and a touch of garlic. It’s composed of melt-in-your-mouth calamari rings, the tentacles slightly crisp and the lemon bits cut into small enough pieces to spear on your fork along with the calamari for a tangy bite.

I also enjoyed the smoked eggplant ragu that accompanies the crispy polenta. I would have like the polenta cut a little thinner for more crispness, but that’s me.

The arancini (fried rice croquettes) brought back memories of New York’s Mulberry Street. The arugula and shaved fennel with salad grapes and pine nuts is a good palate refresher. The butternut squash ravioli with slightly spicy fennel sausage, sage leaves and a somewhat sweet Madeira sauce was quite satisfying both in taste and texture. The egg yolk-only pasta is made fresh daily. I could eat that dish often. 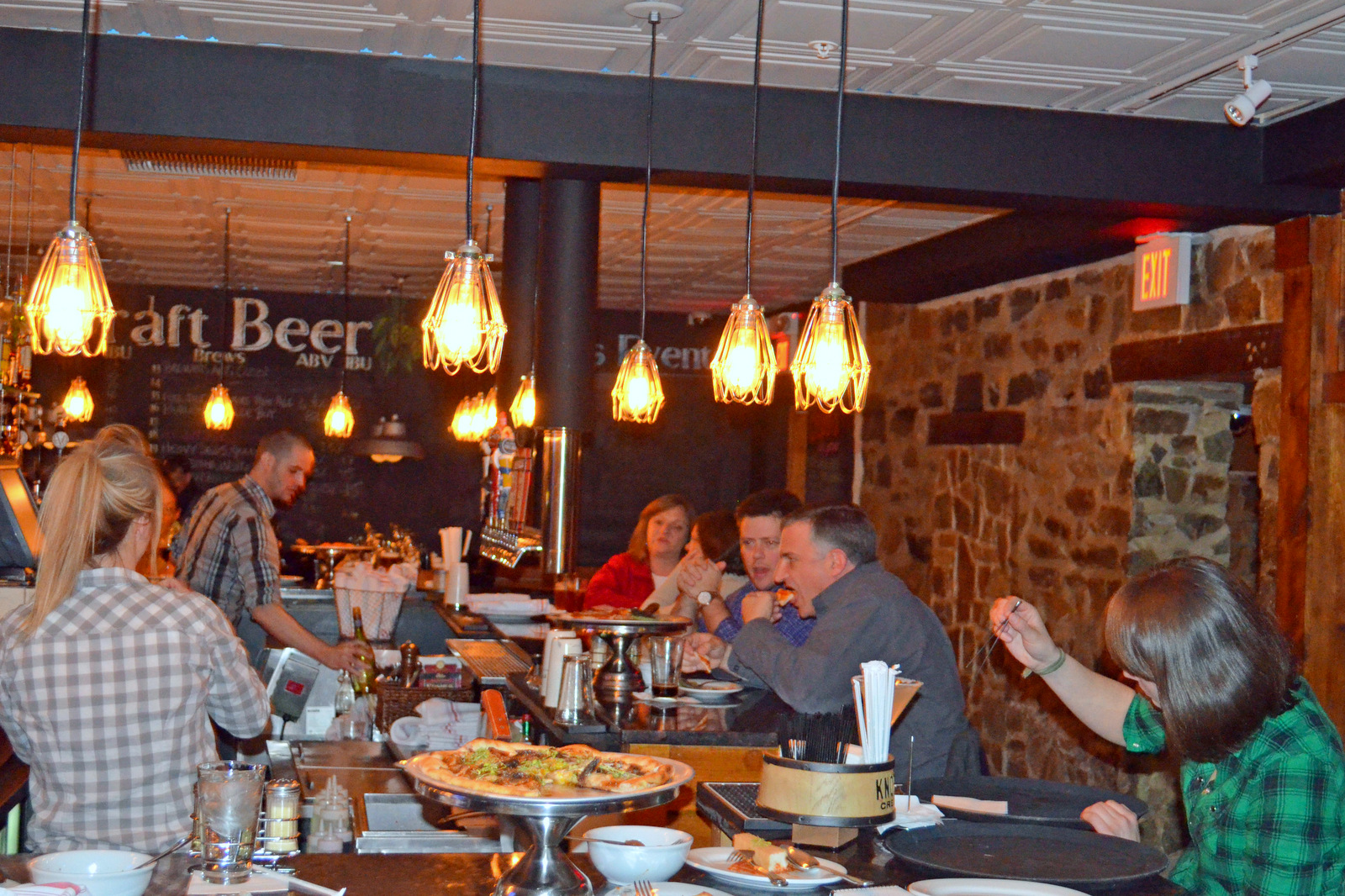 The bar at Birroteca. (Photo by Francine Halvorsen)

Not so much the brussels sprouts, blanched and fried. I enjoyed the charring, but I found it to have too many paper-thin leaves that didn’t hold up to the oil.

For the charcuterie, I could not resist a bit of pancetta and a taste of porchetta. The true test of porchetta is the fat – in this case smooth as cream. Yum. Perhaps not recommended by your cardiologist as an everyday treat, but a few slices from time to time would surely be life-affirming.

Tony Fonash, the in-house charcuterie person, said he grew up in Cecil County and did a lot of fishing with his friends. “I got started smoking fish as a hobby,” he said. From there, he moved on to learning the art of curing meat.

Now most of the meat on the charcuterie menu is cured and smoked on the premises. The bread is from, yes you guessed it, Stone Mill Bakery, just a stone’s throw away.

From Antigua to Baltimore

Owner Robbin Haas was one of Food & Wine Magazine’s top ten new chefs a few years back and since then, this Buffalo, N.Y. native has progressed from entry-level food jobs to being a culinary entrepreneur.

Haas has worked internationally, advised restaurants from Seattle to Atlantic City and has owned and operated many successful restaurants, including one he currently co-owns in Antigua, Guatemala, where he lived for many years.

Locally, he’s had experience in the District and Bethesda, but got to really know Baltimore after he was invited to supervise the opening of the Evolution Public House in Salisbury. When he saw the old stone mill, he knew he had found his location.

One of the first people Haas brought on board was Shawn Whetzel, who he had met at the Public House. Whetzel is Birroteca’s general manager and bar manager, as well. (Whetzel tells  me that, by summer, they may have “an outside seating area, an outdoor spit and grill capacity.”) 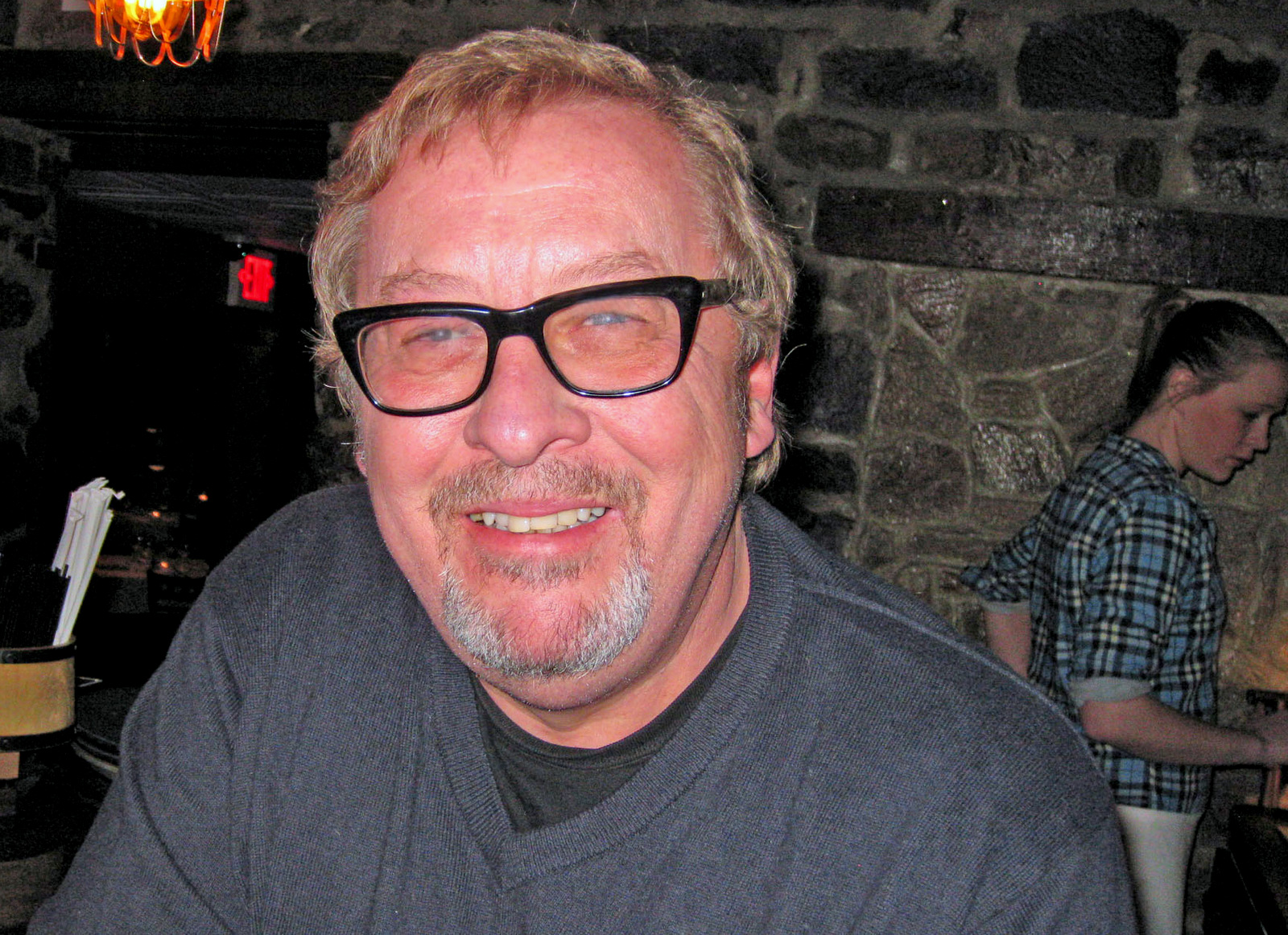 I asked the chef, Cyrus Keefer, to tell me how his day goes. “I get here at 7 a.m. to check the provisions, the kitchen, the staff and the menu. When you have a from-scratch menu, each ingredient is important,” Keefer said. He works for a few hours, goes to the gym and then returns to start cooking. (I’m always astounded by how physical being a chef is.)

The building has been renovated with a wide-open space and a square central bar. The seating at the bar and the surrounding tables comprise one room, while a separate dining room downstairs offers a more formal space. On the Wednesday night I was there, it had filled up by 6:30. Upstairs, if your taste runs to something a little quieter, there is a full service dining area, reached by a candlelit flight of stairs.

Now for the pizza. I lived in Italy for a year and have visited many times since in various regions – there is no one-pizza-fits-all. So put aside your expectations and enjoy yourself. This is not your Little Italy pizza, this is not your chain store pizza, this is not even your semolina stone hearth baked pizza. It is a delicious, crispy, yeasted dough base, with some of the best toppings this side of the Atlantic.

I had the “Duck Duck Goose” pizza with duck confit, fig-and-onion jam, fontina and asiago cheese and an unexpected well-cooked goose egg and enjoyed it thoroughly. What I didn’t finish I took home and refrigerated. The next day I took it out of the fridge, pre-heated the oven to 375 degrees and popped it in for 5 minutes. (My editor found this pizza overly sweet but to me, it was a knock-out.) 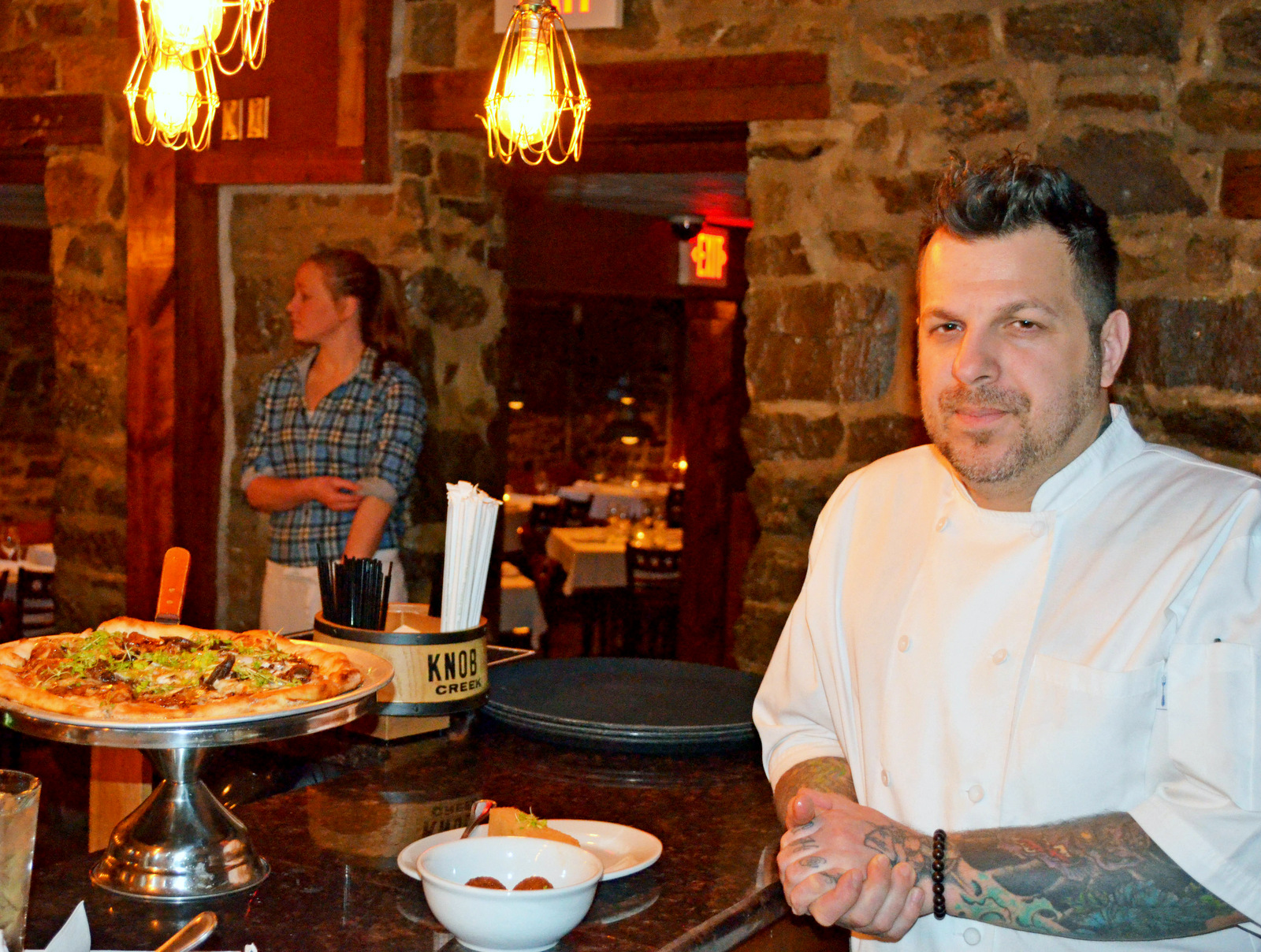 You can get a classic Margherita, a Bianco (white pizza with fontina, gorgonzola, mozzarella and asiago), as well as one with mussels and smoked mozzarella, (my next try). “The Locavore” arrives with market vegetables roasted with cheese and olive oil. So go wild or go cautious, but leave your pizza preconceptions at home.

Each night there is a traditional family style special that serves two or more. Some are flavorful Italian classics, such as the Veal Osso Bucco and Spaghetti with Meatballs and Gravy. Others, like the Vegas Strip Steak and Lamb Milanese, are Chef’s choices. You can check online for the menu. 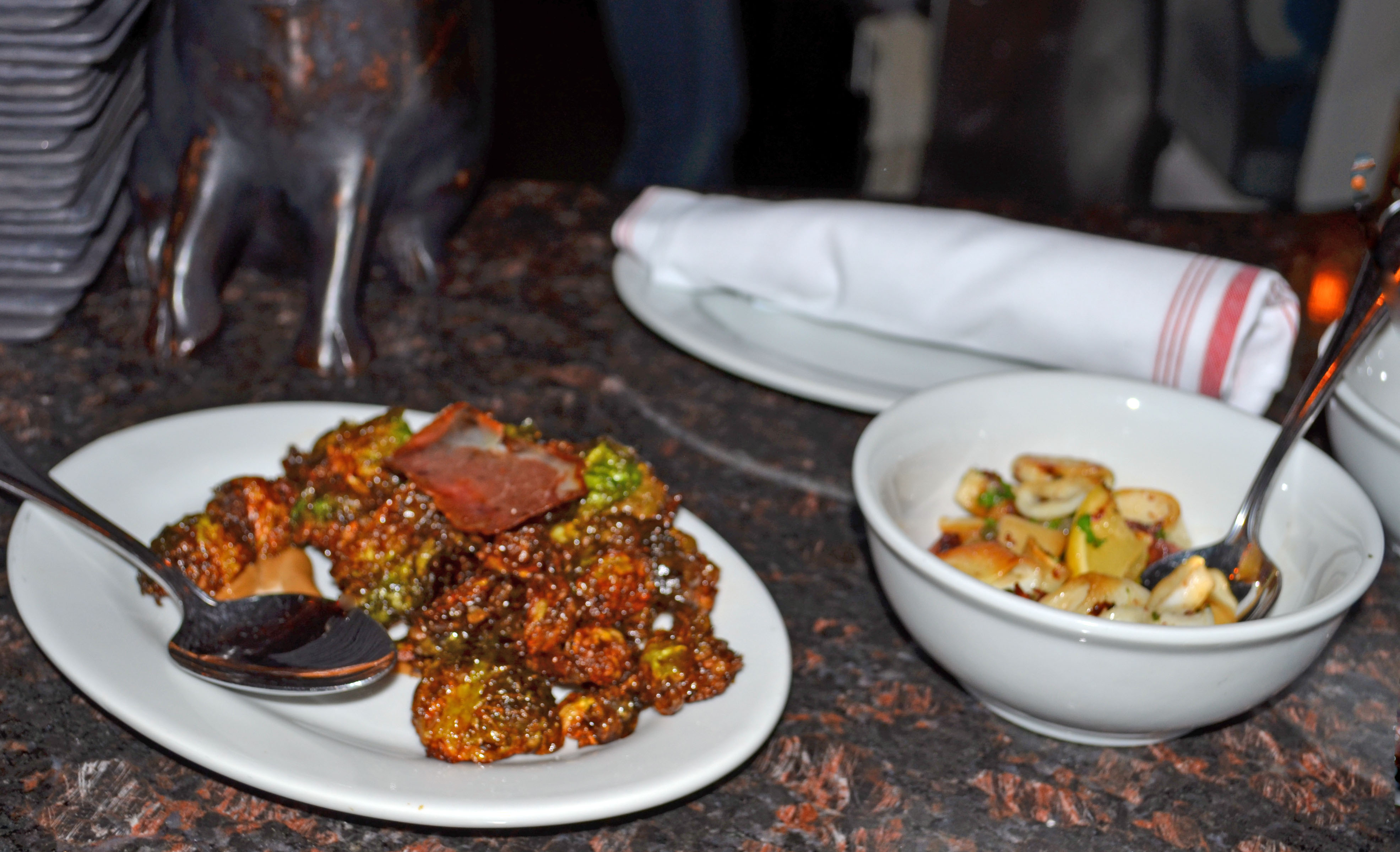 Desserts range from ice creams and sorbets from Tarharka Brothers (also a neighbor) to house-made cakes and cannolis. The cocktail list is intriguing and will require another visit. One of the reasons dinner at Birroteca feels like an evening out is that there is a large well-trained staff that attends to service.

When I asked Kristin Weaver, a bartender, what she like best about working at Birroteca, without skipping a beat, she said, “The people.” The impression of a place can be as important as the food. We all want to feel as though we are someplace worth being for a while. I think Birroteca fills that need.