Here is a question that should interest Baltimore City taxpayers – how can a municipal contract for paper clips, computer paper and other office supplies (Solicitation No. B50001027) balloon from $1.4 million to $8 million?

Or a $5 million award (B50001026) to provide temporary personnel to city agencies rocketed to over $20 million?

The answer lies in the arcane rules governing “requirements contracts” at City Hall, a practice in which competitive bidding is suspended in favor of renewals or extensions to an existing contract.

Such contracts come under the heading of “informal awards, renewals, increases to contracts and extensions” that are submitted weekly to the Board of Estimates – and just as routinely are approved by the board without a moment’s debate.

Requirements contracts are not to be confused with another practice that The Brew has highlighted repeatedly (latest post) known as EWOs or “extra work orders.”

EWOs are change orders or cost overruns on a contract that has been completed – at least theoretically. (As we have pointed out, some water and sewer contracts stretch out for years with up to 50, 70 or more tacked-on EWOs.)

Requirements contracts have renewal options built into the award – meaning that the contract can continue for years beyond its original expiration date.

First, more on the contracts:

• B50001180 to supply traffic cones to city agencies started at $46,440 on September 16, 2009. It contained three one-year renewals. “To meet increasing usage of this contract,” the city has exercised the renewals, making  the current award amount $306,440. National Capital Industries of Hyattsville is the supplier.

• Temporary personnel services for city agencies was awarded to eight employment companies on July 29, 2009. “Due to increased usage of the contract, the initial award amount to each vendor is almost depleted.” The  award has grown to $20.98 million, according to city records. 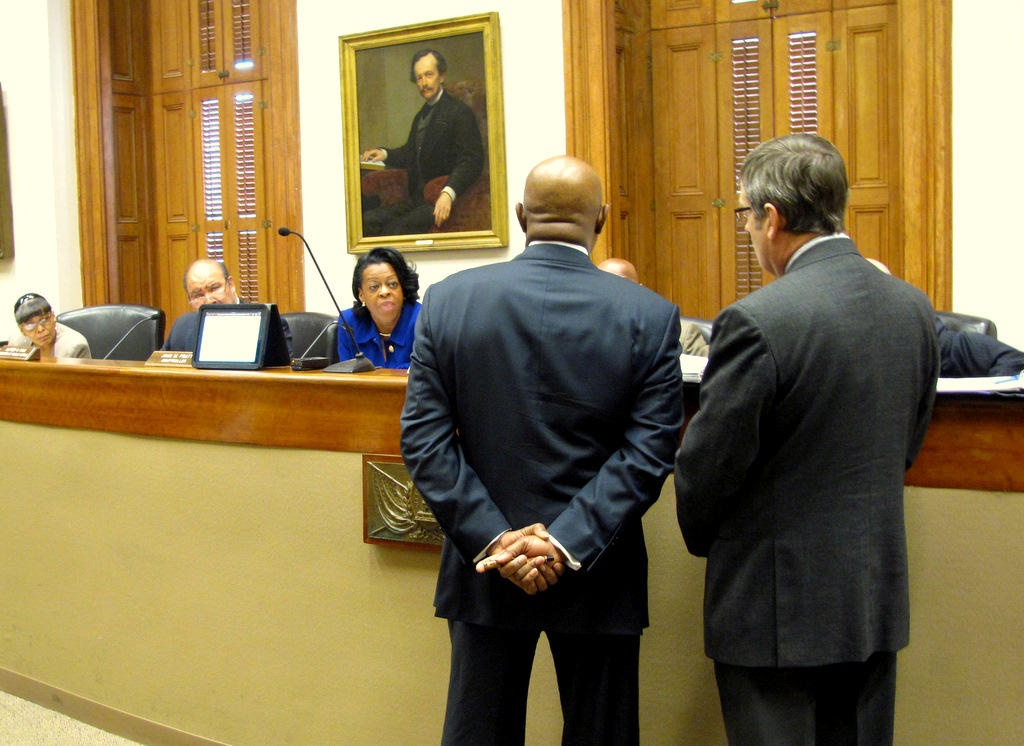 Jolivet criticized the awards as anti-competitive and said the city had no way of knowing whether it was getting the “best price” because it didn’t seek other suppliers.

The practice is especially detrimental to minority businesses because they are shut out of contracts for years, the attorney argued.

Comptroller Pratt, who has approved many requirements contracts in the past, vigorously supported Jolivet at Wednesday’s meeting, repeatedly questioning Timothy M. Krus, the purchasing agent, about the renewals.

Regarding the supply of traffic cones, Pratt told Krus, “We should kind of know how many cones we need. You know you’re going to need more cones [than called for in the original contract] and then you keep coming back for more.”

Krus said that the city’s need for traffic cones is very hard to predict. “We’re had some huge wastewater incidents,” he said, referring to the recent breaks in the city’s water and sewer lines. “It’s both a science and an art to establish the number of cones” needed by city agencies.

Good Deal for the City?

Krus emphasized that the unit price of cones – and office supplies – do not increase under a requirements contract.

In fact, the prices holds steady at the level originally awarded through competitive bids. Considering inflation and other factors, Krus and assistant city solicitor Michael Schrock said the city was getting a very good deal on the renewals.

Jolivet said that argument “completes misses” the thrust of his contention that the City Charter requires all contracts over $50,000 be competitively bid.

Two other members of the spending board – City Solicitor George Nilson and Public Works Director Alfred Foxx – agreed with Krus that the city was getting a bargain through renewals.

If a supplier was trying to win a city contract by low-balling his bid, Foxx said, the extension provisions lock him into that low price and “this bidder has been hurting itself.”

Jolivet noted that five of the eight companies supplying temporary personnel were not in compliance with the city’s minority business goals.

Thomas B. Corey, chief of the Minority and Women’s Business Opportunity Office, agreed that they were not meeting their stated goals and said his office would monitor their future practices on a monthly basis.

However, since the contract ends in four months , without any more renewals, the effectiveness of the city’s monitoring was questioned by Jolivet.

Comptroller Pratt voted against all three contract renewals, but the contracts were approved by Foxx, Nilson and Harry Black, director of finance who represented Mayor Stephanie Rawlings-Blake.

Spokesman Ryan O’Doherty said the mayor was taking the day off to spend time with her daughter, who was on spring break.