Editor’s note: Yaseen Abdul-Malik, a 27-year-old resident of northwest Baltimore, works at two fast-food restaurants at Thurgood Marshall BWI Airport. He took to the stage of the Fair Development rally on Saturday and spoke about the “debilitating effects” of low-wage work on himself and his fellow employees. He later said that speaking before so many people was one of the toughest things he’s ever had to do. This is what he said:

I am a native of Baltimore and I cope with the effects of failed development every day. I work for two different employers at BWI airport – Potbelly’s and McDonald’s – but the stress of working almost 60 hours a week, just in order to maintain a basic living standard, has taken a toll on me in general.

It’s not fair that we work on publicly owned property, paid for by tax dollars, our tax dollars, but we are paid barely above minimum wage. Our employers’ benefit from massive public assistance – assistance that comes out of our paychecks and off of our backs – but what is the benefit to our community?

Some of us are paid so low that the only time they get a decent meal is when they are at work. I know women who have children who only purchase enough food for the day because their electricity has been cut off so they can’t use their refrigerators.

I know coworkers who haul thousands of pounds of restaurant food and supplies across the airport with no recognition. I know people who work while they are sick because they don’t have any paid sick days or insurance for that matter.

For me personally, I am working on my feet everyday unable to afford to take time off to have surgery on the ulcer in my leg. My doctor told me that I need this surgery, or else I risk losing my leg. Failed development at the airport means that I am living paycheck to paycheck and I have to choose between my health and my finances.

We have witnessed that our government is willing to spend our money on casinos – gambling with our futures – but the cupboard is bare when it comes to schools which should not only provide an excellent education in literature, the arts, mathematics and the like, but real skills for trades that are not only beneficial, but a necessity, for the growth of the city, the state and our country as a whole.

We are told we have money for malls and the Grand Prix, but not for recreation centers and libraries which help cultivate the seeds of inspiration and creation.

We have money to invest in tourism and – on a grander scale – bailouts and war, but we don’t have the funds for steel mills, improved infrastructure or for future-oriented development that builds our community not only for the present but for the future generations even after we have passed on.

We are making a stand just like our forefathers on July 4, 1776. We demand the right of life, liberty and the pursuit of happiness – for all of the people, not just some. Thank you. 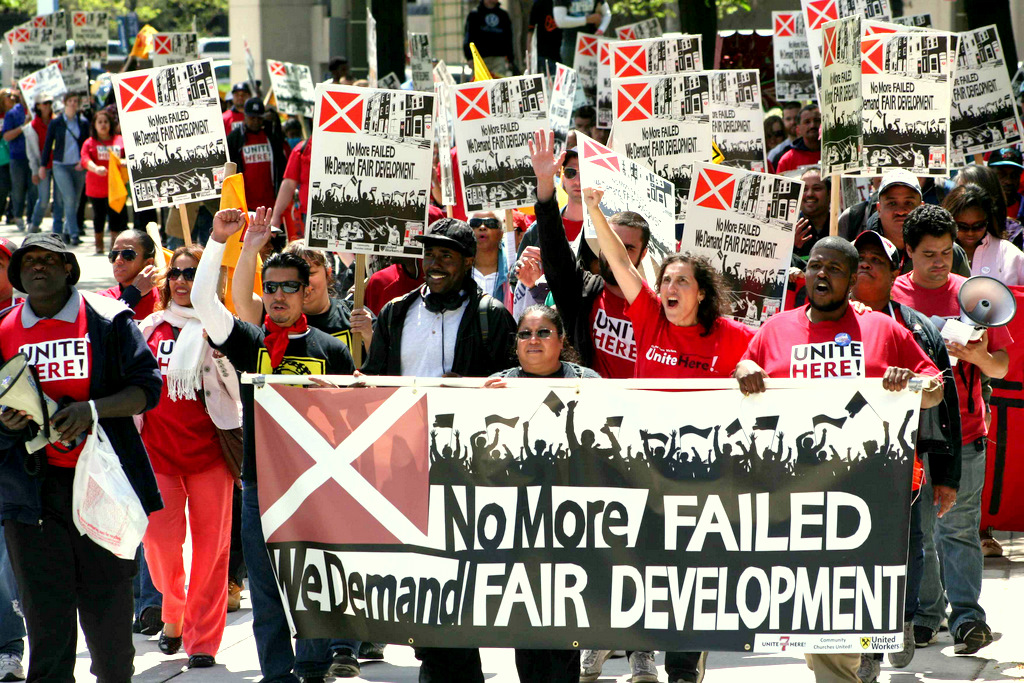 Yaseen is seen holding the banner during the march to the Inner Harbor after his speech. (Courtesy of Michael Fox, United Workers)