“Does your zip code matter more than your genetic code?”

This question raised by Dr. Anthony Iton, senior vice president of Healthy Communities, was at the heart of a symposium on the social determinants of health held at Johns Hopkins University yesterday.

Although the conference focused on understanding and eliminating health inequity across the United States, the host city of Baltimore served as a potent case-in-point.

“Only six miles separate the Baltimore neighborhoods of Roland Park and Hollins Market, but there is a 20-year difference in the average life expectancy,” said interim Hopkins provost Jonathan Bagger, whose office hosted the day-long event along with the Urban Health Institute. 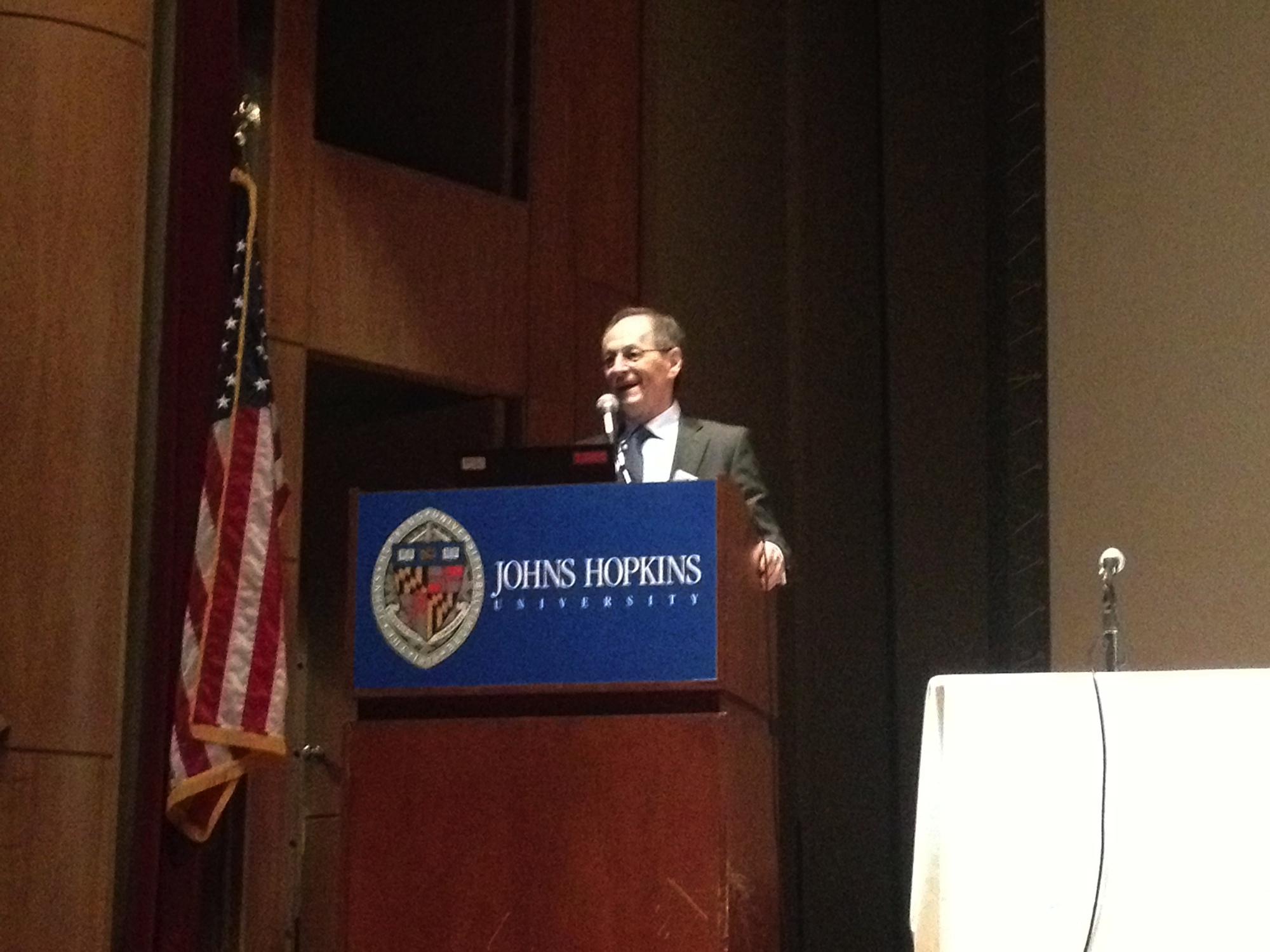 Keynote speaker, Sir Michael Marmot, chair of the Commission on the Social Determinants of Health at the World Health Organization. (Photo by John Bloch)

Baltimore may be home to world-respected leaders in health care and medicine, Bagger noted, but if it were a country, Baltimore would rank 76th in infant mortality.

That would place Baltimore in the company of Moldova and Belize.

In introducing the panel discussions and research presentations by experts from Hopkins and elsewhere on education, race, economics and other issues, Bagger promised a meeting with a broad scope and ambitious aims.

“When we think about the social determinants of health,” Bagger said, “we are not only talking about health services, but also access to housing, education, social support, employment and other critical factors that together determine health outcomes.”

Perhaps the most extreme case of urban health disparity mentioned during Tuesday’s symposium came out of Cleveland. The neighborhoods of Hough and Lyndhurst, separated by mere blocks, had average life expectancies of 64 and 88 years respectively, Iton said.

He tried to convey the severity of the disparity – a 24-year gap in average life expectancy that could be covered on foot.

“There is concentrated disadvantage, and you can map it,” Iton said. “And using this, we started to say to people, ‘give me your address and I’ll tell you how long you’re going to live.’”

Health disparities at the neighborhood level are complex, but evidence about the negative effects of alcohol outlets versus the effects of health promoting outlets like parks and supermarkets is robust, said Baltimore’s Commissioner of Health Oxiris Barbot, referring to the city’s recent controversial initiative to shut down some liquor stores and lounges via zoning.

Issues of race, past and present, continue to shape the health equality gap, several speakers said. Jonathan Ellen, a sexually transmitted infection expert at Johns Hopkins, explained how the scars of segregation are still visible in the data today.

“If you look at sexually transmitted infections in Baltimore,” Ellen said, “their biggest blooms sit around North Avenue – south of North Avenue. North Avenue was the line in the city where people were not able to get mortgages if their skin was not white.”

With an eye towards the future, Baltimore native Dayvon Love, director of research and public policy for Baltimore-based Leaders of a Beautiful Struggle, called for more “race literacy” in the public discourse about inequity in the United States.

“Those that have power and control over the institutions in their community have better health outcomes because they know what will give them a better quality of life,” Love said. “And so one of the biggest ways we can contribute to addressing these health inequalities is by giving people control over their own lives.”

The Price of a Year of Life

Iton spoke of how researchers in the San Francisco Bay area plotted the cost of living in a poor neighborhood, measured in premature death.

“You can actually monetize the slope of that line and tell people that every additional $12,500 in household income buys you a year of life,” he said.

With this correlation between wealth and health, income can truly be viewed as a matter of life and death. Taking that link between economics and health disparity a step further, Lester Spence, a professor of Political Science and Africana Studies at Johns Hopkins, said that cities like Baltimore could be doing much more about it. 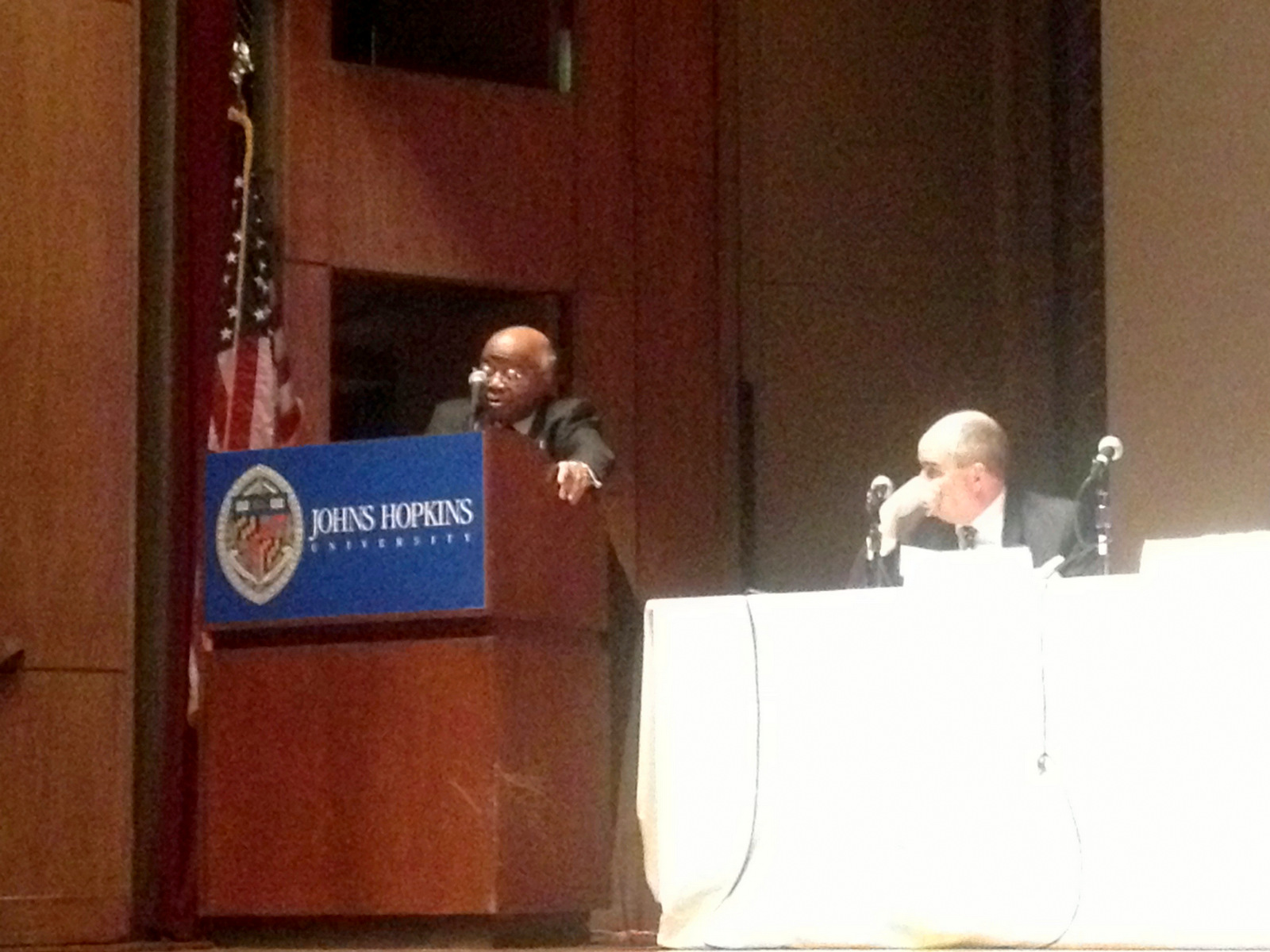 James Comer, founder of the Comer School Development Program, speaking with David Andrews, dean of the Hopkins School of Education, at right. (Photo by John Bloch)

“Baltimore recently gave $100 million dollars in tax credit to just one entity in the Inner Harbor.”

Why Did She Die?

In a harrowing anecdote that gave the discussion of health disparity a human face and its causes a simple explanation, Adawale Troutman told the story of a 55-year-old patient from the greater New York area.

Once an emergency room physician, but now president of the American Public Health Association, Troutman recalled that the patient came to the ER with lumps under her skin and died six months later of an advanced fungating cervical carcinoma.

She lived in a neighborhood that even the postal carriers dared not frequent, and where the clinic she attended was three bus rides away.

“She really died,” Troutman said, “because the social determinants that were not acting in her favor and the fact that there was gross inequity when it comes to the health of this particular population”

Social progress has not been able to keep pace with scientific advancements in medicine. “We have a practice to prevent death, we call it emergency rooms,” Dr. Iton said.

Education, communication, and policy change were at the forefront of suggested solutions to the problem of health inequality.

Attendees from different specialties were given the opportunity to collaborate during afternoon work sessions, and Hopkins students presented research addressing the social determinants of health in Baltimore during the Action for Equity Poster Session at the conclusion of the symposium.

To close the symposium, Iton stressed the importance of spreading the message of the social aspects of health in the United States.

“That’s how the silent majority understands these issues. They have to understand the narrative first, before you can take them along the journey towards policy and results. We think that’s the recipe for building healthy communities.”