William J. Bratton, the ex-police chief of Los Angeles and New York, will be paid more than $50,000 as a consultant on a policing plan ordered by Baltimore Police Chief Anthony W. Batts.

Bratton and Batts are self-described “close friends” dating back to their days in California law enforcement (Batts was chief of police at Long Beach when Bratton headed LAPD).

“Tony Batts is one of the best there is in America policing today,” Bratton told The Baltimore Sun. The two served as research fellows at Harvard University’s John F. Kennedy School of Government, and Bratton supported Batts’ bid to become Baltimore’s new police chief last August.

His remuneration is part of a $285,834 “police department consulting service contract” (B50002753) that was approved today by Mayor Stephanie Rawlings-Blake and the Board of Estimates.

The details of the contract jointly submitted by Strategic Policy Partnership and The Bratton Group – the highest of five bids submitted to the city – were reviewed by The Brew.

Both Batts and his chief of staff, Judy Pal, recused themselves from review of the bids because they have connections to several of the firms.

Pal, for example, was previously director of operations for Kroll Security Group, whose chairman was Bratton. Bratton resigned as Kroll’s chairman last November but remains a senior advisor.

A storied law enforcement official known for his “zero tolerance” policies, “Bill” Bratton has had a long association with Robert Wasserman, a former police official in Houston and Boston who formed Strategic Policy Partnership in 2003. 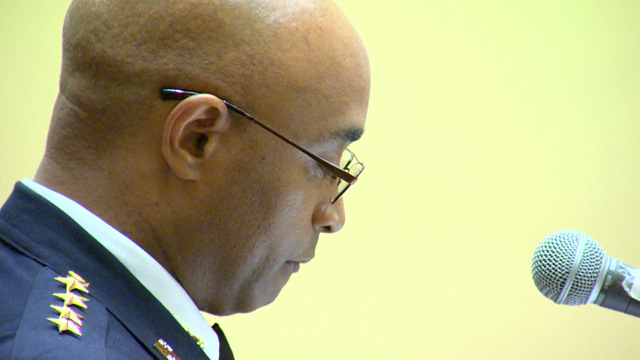 The crime fighter turned consultant  heads up his own firm, The Bratton Group, which provides safety and security advice on four continents, according to its website.

Bratton and Wasserman recently joined forces on a $250,000 contract with Oakland, Calif., to develop a strategic plan to curb violence in that city. Batts was Oakland’s police chief from 2009-11 after leaving Long Beach.

Florida-based LEAC filed a protest over the loss of the Baltimore contract, but its president, retired Miami-Dade County Police Director Fred Taylor, did not appear before the spending board today.

During a brief discussion of the contract, city purchasing agent Timothy Krus revealed that the city had rejected the four lower bidders.

“We took a hard look at the minimum qualification of the bidders and they [Strategic Policy Partnership/Bratton] were the only bidder that met all the qualifications. So though at the highest price, it was the only responsive bidder,” Krus told the board.

City Comptroller Joan Pratt joined Rawlings-Blake, City Council President Bernard C. “Jack” Young and two other members of the board in approving the contract, saying, “Hopefully Mr. Krus is giving the board the facts.”

Breakdown of the hours to be spent by the consultants in the police plan. Bratton’s hours are listed in column seven. The average per-hour cost of the consultants’ 1,238 hours of work – $230.88.

The contract calls for an internal survey of police employees and “creation of a strategic plan with goals and objectives for three and five years” within a 90-day timeframe.

With the bulk of the work handled by others, Bratton will devote 16 hours on “current crime reduction strategies” in Baltimore, 16 hours on crime data and crime issues and 24 hours on the force’s organizational structure.

He will also spend 16 hours on “goals and objectives based on assessments,” according to the bid document (see above).

Bratton is known not only for his “zero tolerance” policy, but for neighborhood policing and seeking to build community trust in the police force. The same strategies have been cited by Batts as important goals for Baltimore.

The completed plan submitted by the Bratton-Wasserman group will “provide guidance for the future, setting forth the vision for policing Baltimore, identification of the primary strengths of the department that must be reinforced and protected, the areas for improvement, and the implementation strategy for moving forward with vigor and commitment.

“We expect this Plan will capture the imagination of the department as well as the community, and provide a basis for community and police to join in creating a very safe and secure community,” the bid proposal reads.