On a recent extra-warm day in May at the arabbing stable on the corner of Fremont and Laurens streets, the faces of past fruit-and-vegetable sellers smiled down from a mural, while the current ones sweated in the heat.

The place was humming with activity. Dennis Randall brushed a horse named Ben, while 16-year-old Brian “Fatboy” Royster helped the veteran arabbers prepare Bruce – a beautiful gray horse – to go out into West Baltimore with a cart full of produce for sale.

Fatboy held Bruce still, while Demetrust “Meachie” Gayle attached the red-and-yellow plume atop the animal’s head. Fancy black harnesses with white “bone rings,” gold trim, bells and other finery are part of the tradition for these horsecart food sellers, who have been walking the streets of Baltimore for more than a century. 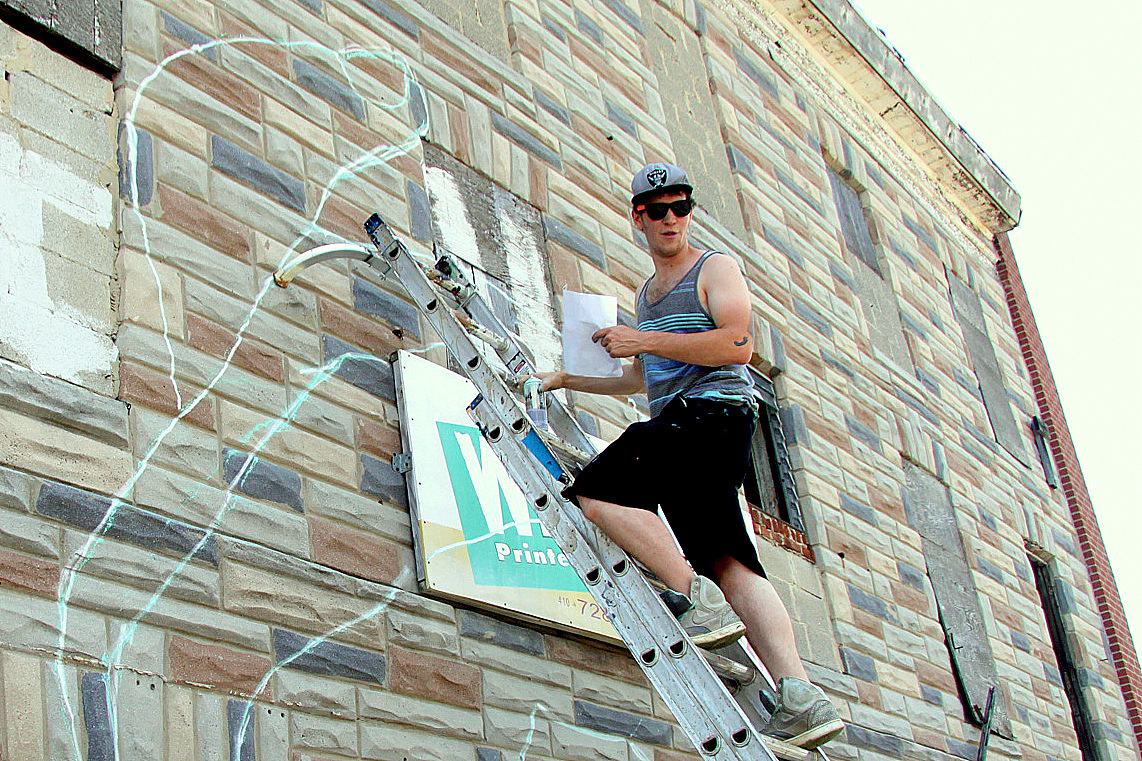 The artist Nether working on a mural at the Fremont St. stable. (Photo by Theodore Epstein)

But another urban tribe, also preferring nicknames, was working at the stable this day – street artists.

Up on a ladder painting a mural on the Formstone facade of a shuttered vacant building was Nether. Walking with a reporter, Nanook showed murals that he had made recently (incorporating oriole birds) along with the large piece completed by Gaia last fall.

The artists have been working here for the past few weeks (funded by a Kickstarter campaign that blew past its $4,500 goal) painting the network of stable buildings inside and out in hopes of bringing some attention and support to the city’s few remaining arabbers.

They’ve been through a lot,” said Nanook, stroking the nose of an old Clydesdale named Ben, who has the honor of pulling the large cart for funerals. “We thought we could help.”

Bumps Along the Route

In their heyday, arabbers (pronounced a-rabber) would be seen by the hundreds in Baltimore, “hollering” their trademark calls to bring customers out of Baltimore’s rowhouse neighborhoods.

These days, four teams go out of the Fremont Street stable and two go from the smaller South Baltimore stable near the B&O Railroad Museum – and that’s about it.

There are less than a dozen arabbers left in the city. So says James “Fruit” Chase, grandson of arabbing patriarch Donald “Manboy” Savoy. (Featured prominently in Gaia’s mural.) 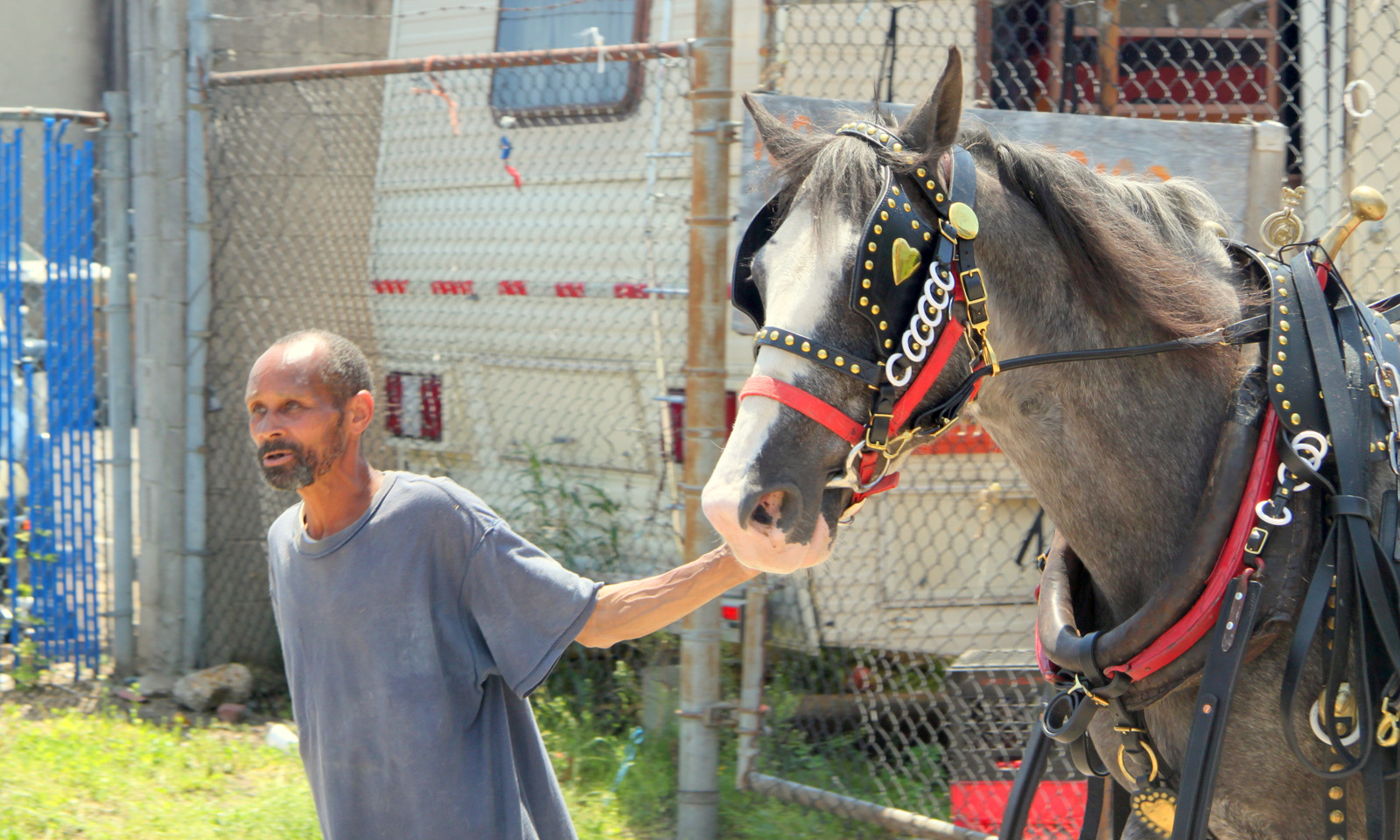 Dennis Randall lives at the stable and cares for the horses there. (Photo by Theodore Epstein)

Their fortunes falling over the decades along with the shrinking city’s, the arabbers also lost their close-by source of fresh produce years ago when the wholesale produce market at the Inner Harbor was shut down. Now they get their produce by truck from distant Jessup.

At times under fire by animal rights activists, the arabbers have also had a history of up-and-down relations with city government. In 2007, the city shut down the decrepit Retreat Street stable and confiscated the horses, sending them first to Bowie, then to Pimlico and finally to a tent-stable under the Monroe Street bridge in West Baltimore.

When asked about these hardships, Chase replied simply: “I don’t mind, it’s my passion.”

These days, he said, relations with the City have been better, with Health Department officials helping them get food cart licenses, health certificates and other permits. There are 14 horses at Fremont Street and others at the South Baltimore stable. 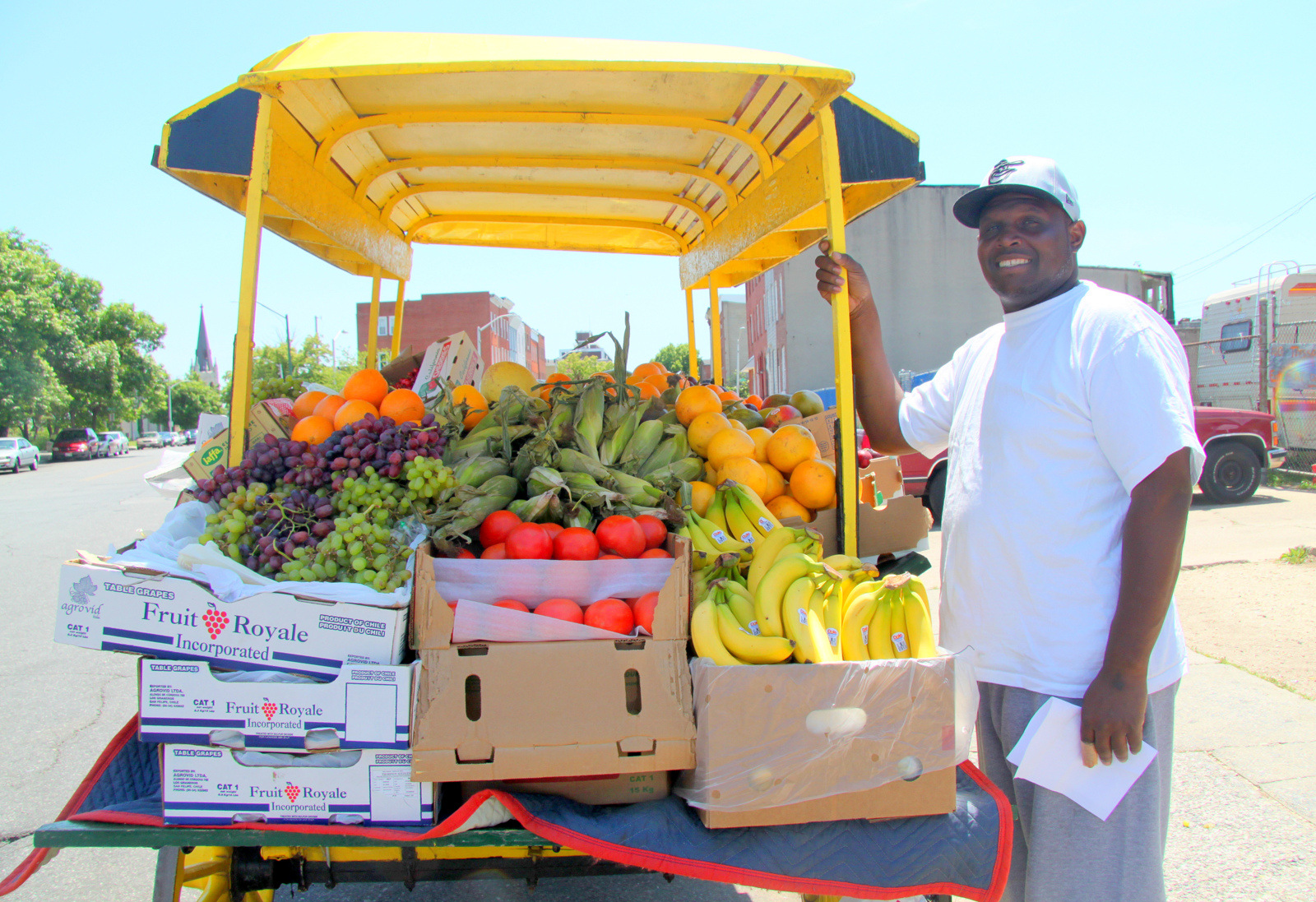 Asked about his vision for the future of Fremont Street, Chase was expansive.

“I’d like to have a little museum here, workshops on how to handle the horses and groom them, take kids on pony rides, teach them about farm animals,” he said.

If the artists could attract some attention and financial help, he added, some funds could also go toward much-needed roof repair.

There is even talk of making use of a nearby vacant lot as a small urban “pasture” for the horses.

Arabbers can be a force for good in the community, he said. “It’s been my idea they can give people here something to do,” Chase said. “Instead of the community selling drugs they need to be involved in something positive.”

Rolling Rx for the Food Desert?

The Arabber Preservation Society has shared that vision since its founding in 2008.

“At this point in time it’s advantageous for young people to get involved and be independent, just for some income,” said Dan Van Allen, longtime president of the Society. “It’s good to see that they’re training new people; that looks good to me with all the need for food in the inner city, and the emphasis on sustainability.”

Lately, the public focus on the scarcity of fresh produce and healthy food in the city’s impoverished neighborhoods has brought some renewed attention to the arabbers. Along with the street artists (Nanook, Gaia, LNY and Mata Ruda), others have been trying to document and support the arabbers. 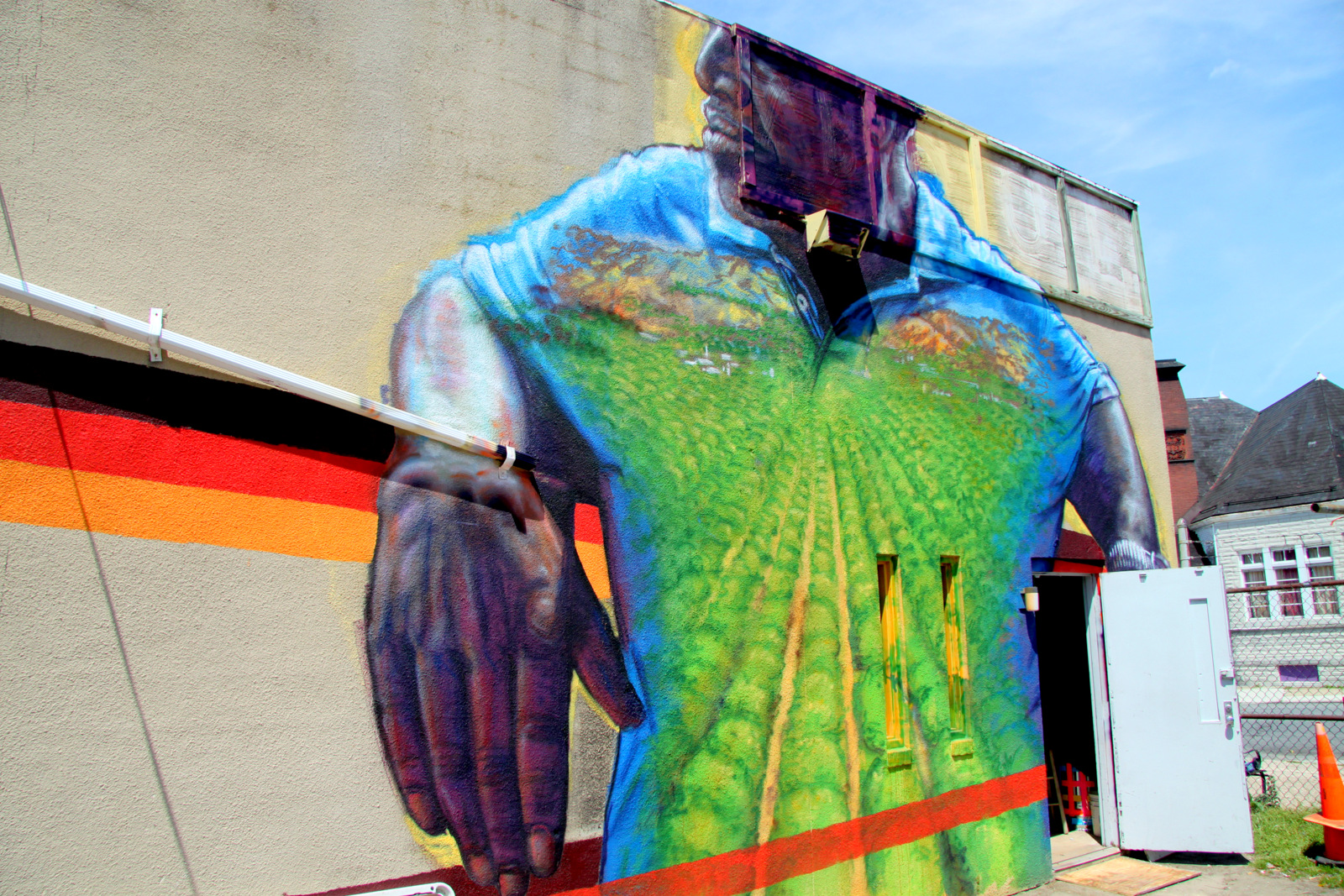 “Arabbing has become less and less profitable. There are more and more hoops to jump through, but it is a way to bring food into these urban food deserts,” said Janessa Wells, a filmmaker who has been working with her boyfriend, the photographer M. Holden Warren and the artists at the stables recently.

Indeed people were cruising up to the fruit-laden cart on Fremont Street last week even before it left the stable. One man bought tangelos. A city worker stopped his truck and bought a watermelon.

“I have all kinds of regular customers,” said arabber Marvin Tyler, who planned to take the cart up to North Avenue.

The other way arabbing sustains the community is by providing extra income for the dwindling number of people who take to the streets or work around the stables.

Tyler said he works for Johns Hopkins cleaning and polishing floors but that he has needed to supplement his income “because they aren’t giving us any overtime these days.”

Meachie, who has been arabbing off and on for 30 years, said health concerns have made the work especially important to him lately. 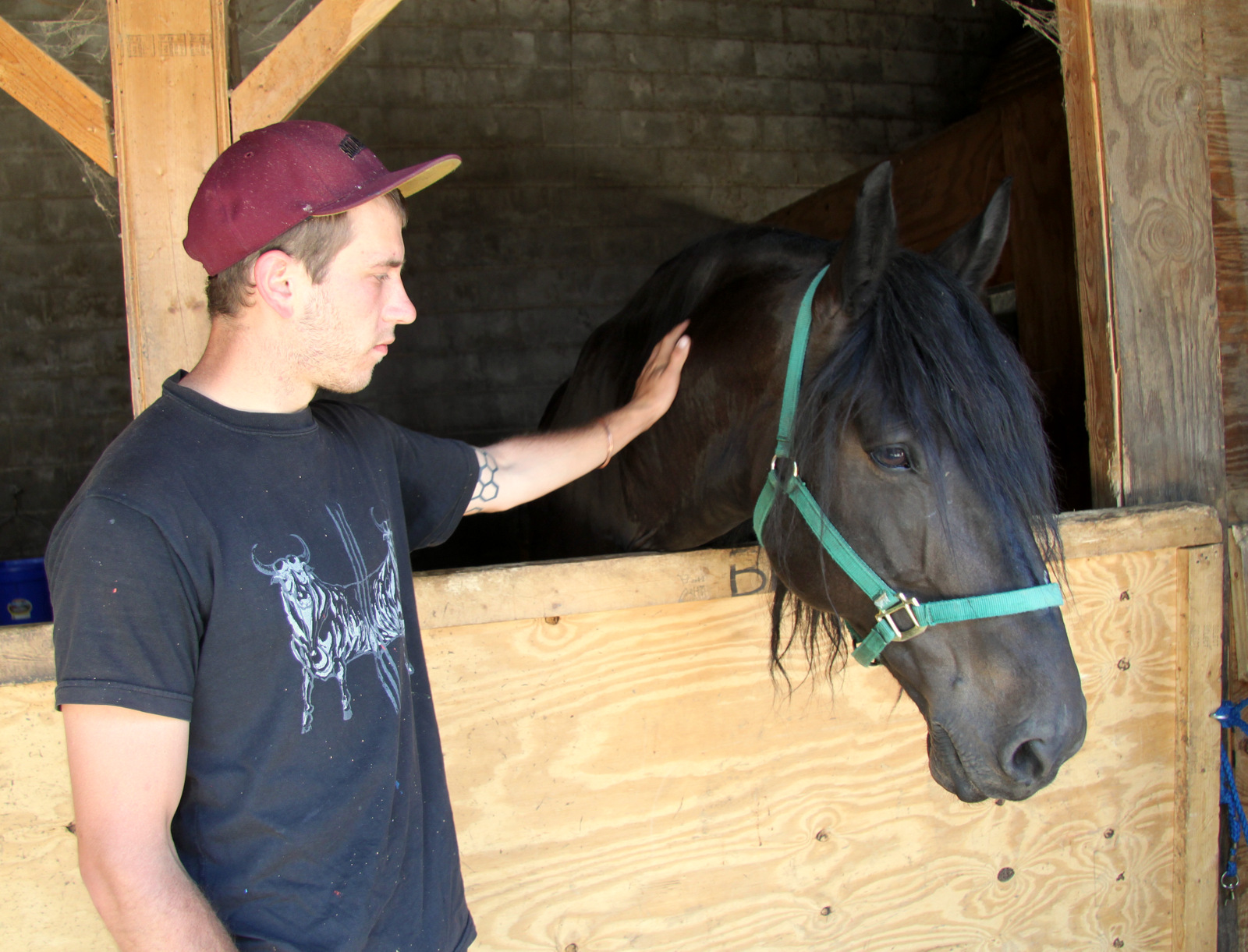 The artist Nanook, with one of the older horses, Ben. (Photo by Fern Shen)

Ever since he had a stroke, he’s been arabbing “with my baby brother,” he said, noting that over the years he has had a number of more physically demanding jobs – doing blacktop work, drywall finishing and maintenance work with the B&O Railroad.

This is, without a doubt, a happier (if somewhat quieter) time in arabbing history. They seem to have a tacit agreement with the city, and a mellow partnership with Nanook, Nether and their crew. “They helpin’ enough. I like ’em,” said Fruit, speaking of the artists.

Nanook said he and the other artists reciprocate this feeling. “It’s great to have a reason to talk to people and learn about the whole culture. They’re really chill guys.”

Soon, the artists will move on to new endeavors. Nether climbed down off his ladder with a gleeful grin to talk about an edgier project planned in the city. For now, though, the two groups work side-by-side in a kind of symbiosis in the grey markets of the urban food desert.

“Every day above ground is a beautiful day,” said a passing arabber. 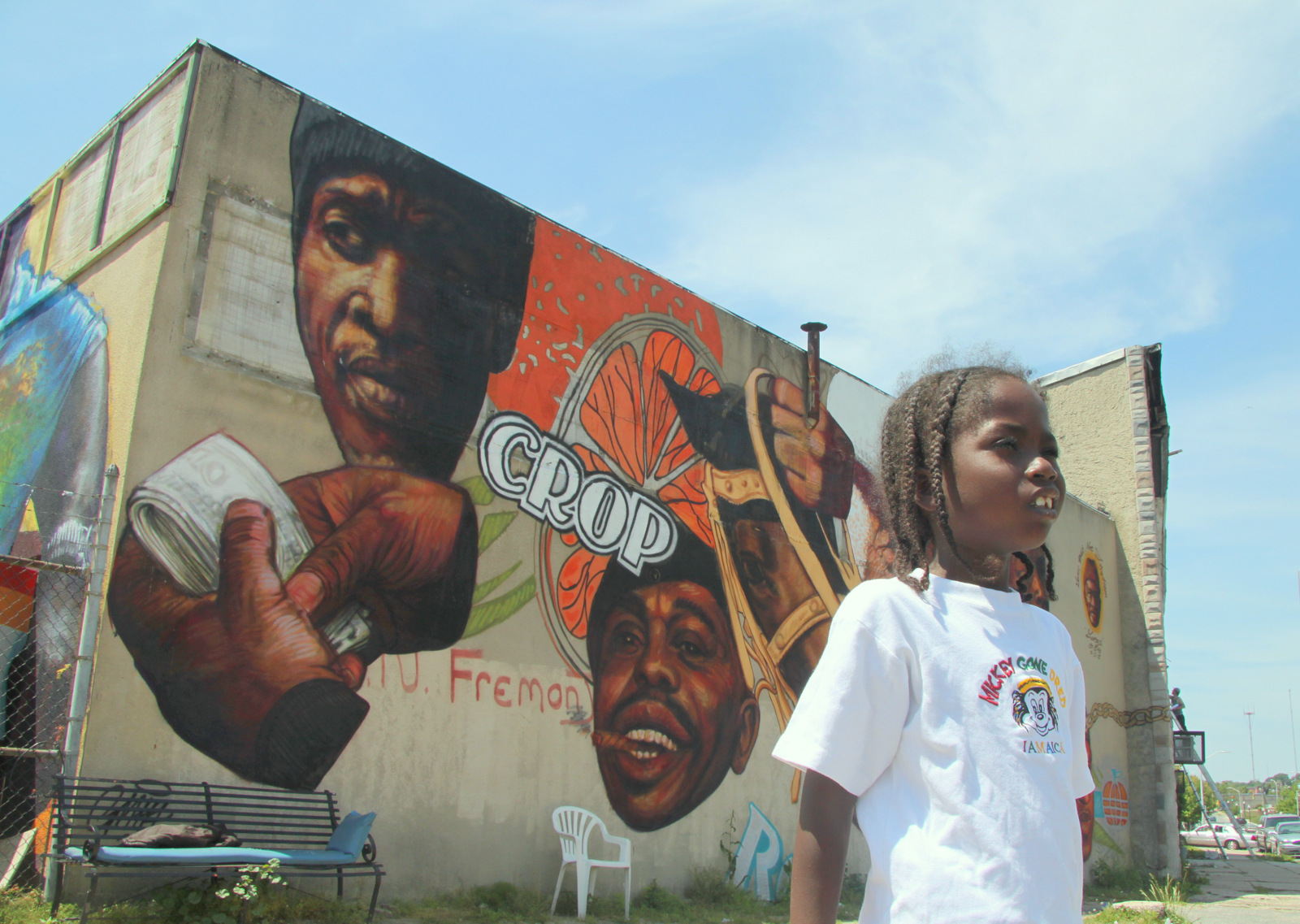 Derrell Pollard, 8, likes to watch and help out at the stable. (Photo by Theodore Epstein) 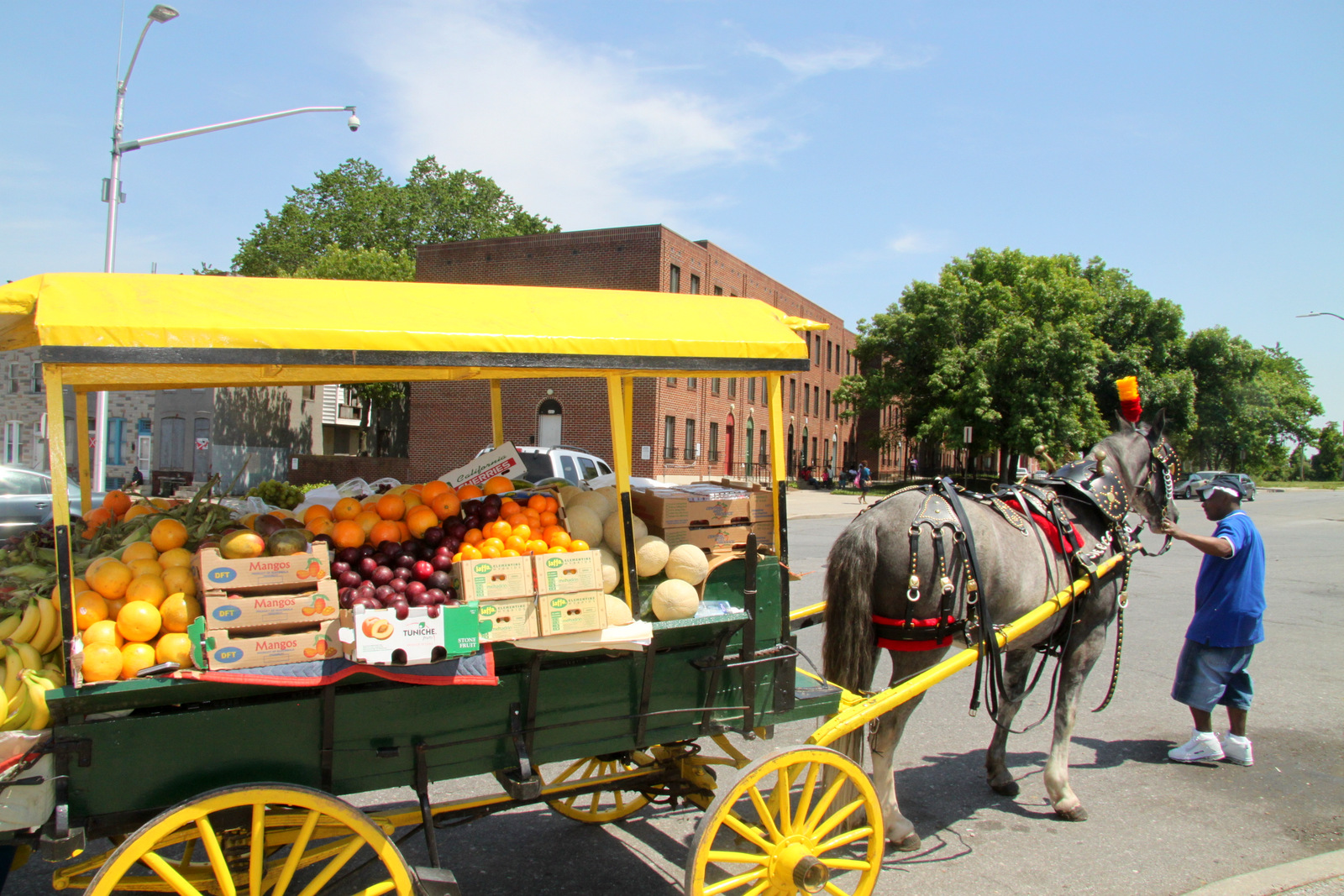 Marvin Tyler and Bruce heading out from the Fremont Street stable. (Photo by Theodore Epstein)