Opponents of a proposed Royal Farms store in Hamilton have been saying for months that the 50-parking-spot, 12-gas-pump, 24-hour store is being pushed inexorably – past overwhelming community opposition – because it has high-octane political juice at City Hall.

Lately, they are pointing to a new piece of evidence: an April 23 letter from Mayor Stephanie Rawlings-Blake herself to Councilman Robert W. Curran committing the city to spend a half million dollars for an intersection realignment that Curran and others are using as a selling point for the project.

“The Department of Transportation is investigating the intersection improvement project at Harford Road, Old Harford Road and Glenmore Avenue and has committed $500,000 for design and construction for traffic safety improvements in FY14 based on the preliminary investigation,” Rawlings-Blake tells Curran in the letter cc’d to the city’s acting transportation chief and two of her top aides.

For Northeast Baltimore residents who argue that “a mega-Royal Farms” at the intersection will make it more dangerous, with or without the improvements, the half-million-dollar spend is just one more sign they are in a David-and-Goliath battle.

“They’re taking down a whole block at Harford and Glenmore to build this huge gas station and they’re taking a half-million dollars in city funds to build a new intersection for it,” Ebelein said to the woman, who had rolled down her car window and was listening intently.

“All the community associations don’t want it!” added another picketer, Maria Allwine, one of about a dozen people holding signs that said, “Boycott Royal Farms” and “Hamilton is getting royally screwed.” 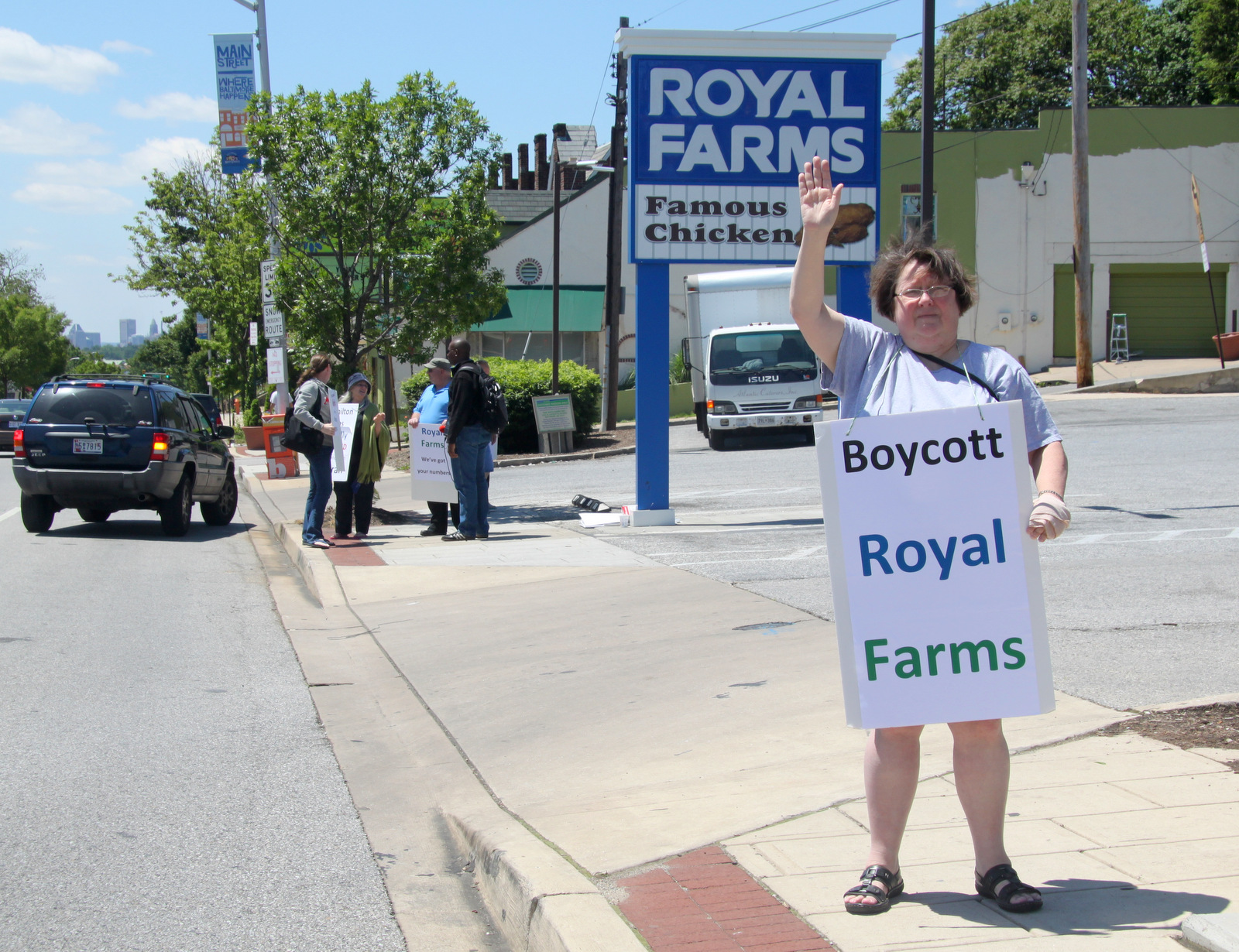 Sheila Ebelein and other opponents of a 12-pump Royal Farms in Hamilton have been picketing at the smaller store nearby. (Fern Shen)

The picketers were handing out fliers saying that the project is opposed not only by all the neighboring associations, but by the HARBEL Community Organization and by Hamilton-Lauraville Main Street. (They’ve got more than 500 signatures on a petition as well.)

They argue that the 4,000-plus-square-foot store is incompatible with the nearby homes, schools and library branch, and would exacerbate traffic problems.

The site is currently owned by Operating Engineers Local 37, which has used the nondescript buildings as a union hall and rented space to others, including the Baltimore Building Trades Council. Local 37 is in the process of vacating the complex and has long sought to sell the property.

Long affiliated with local unions (he is chairman of the City Council’s Labor Committee), Curran received $500 from Local 37’s Political Action Committee for his 2011 reelection campaign.

Following their loss in April when the Board of Municipal Zoning Appeals granted a conditional use for the Royal Farms project, opponents have been calling for a Royal Farms boycott, holding weekend protests at the Harford-Glenmore intersection on Sundays and at the nearby Royal Farms on Saturdays.

Before turning to a legal battle, opponents had tried, according to Vijayan, to negotiate with the city and Royal Farms.

“We went in with conditions we could live with, not having it be 24 hours, things like that. But we did not get a single thing we asked for,” Vijayan said. “There attitude was like ‘We don’t need you.’”

The proposed intersection fix would realign the two sides of Glenmore Road, which don’t line up as it crosses Harford Road. Royal Farms has agreed to cede a piece of the parcel to the project at no cost.

“The city has a responsibility to engineer the roads properly everywhere – if they do this it shows things are skewed to somebody’s special project,” said Robert Price of Charles Village.

Proposed realignment would curve Glenmore Road so it lines up better on the other side of Harford Road. (Baltimore Department of Transportation)

“It smacks of a quid pro quo and it’s unconscionable,” Ebelein said. “I think people would be pretty pissed at the idea of a half-million dollar expenditure by a financially distressed city in order to facilitate, not permit, a privately owned company to do business at a location that over 500 people think is at least inappropriate and at worst dangerous.”

Would the realignment improve safety at an intersection opponents themselves have said spawns multiple accidents?  That’s how the BMZA viewed it in granting the conditional use:

The zoning board noted other changes: making Mary Avenue one-way, eliminating parking along it, adding bump-outs, adding “green space/buffer,” and the fact that the original proposal was scaled back from 74 parking spaces to 50 and from 14 pumps to 12.

Ebeliein argues the project would actually decrease safety “because of the complexity of the lights and increased vehicular traffic turning east onto Glenmore. Couple that with the Glenmore egress from Royal Farms, and it will be one fine mess.”

Whether this is the case could have been properly determined, Ebelein said, but the city allowed Royal Farms to drop a planned traffic study in return for giving up a piece of land for the realignment. As The Brew reported at the time, opponents were incensed when this deal was cut.

Acting transportation department director Frank Murphy has not responded to an email asking about residents’ critique of the realignment.

Murphy explained where the idea came from, however, in a February interview with The Brew: “Councilman Curran actually had the idea.” 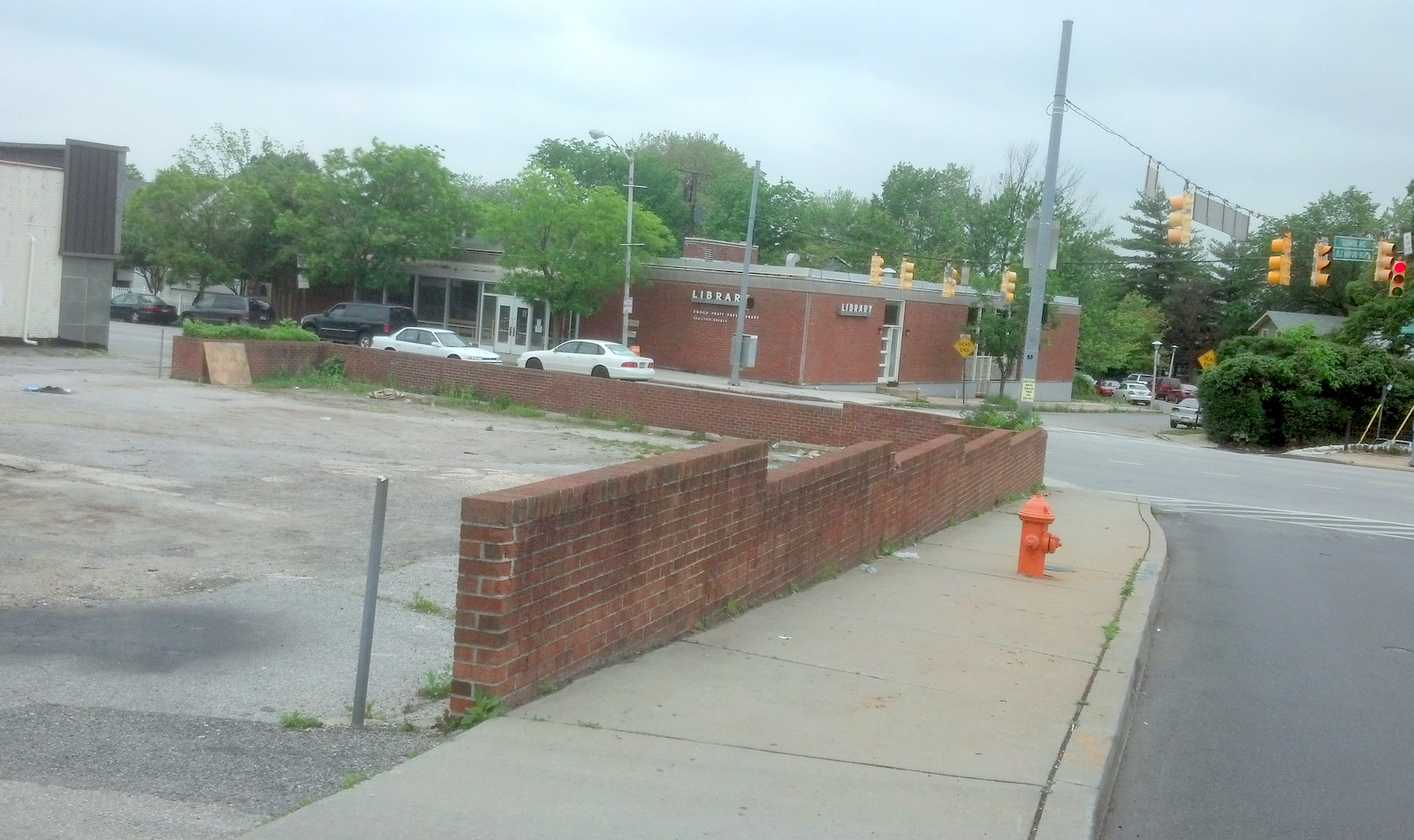 The north end of the proposed Royal Farms where funds for a new road alignment were committed by Mayor Rawlings-Blake. The Operating Engineers’ building is to the left. (Fern Shen)