Waist-high weeds and poison ivy. A strong smell of urine and a dead white cat. A collapsed back wall replaced by a tree so big it had clearly been growing there for at least a decade.

The rank reality of these Northwest Baltimore vacants was energizing slumlord-outing blogger Carol Ott and street artist Nether on a recent May morning.

“Look at her – she lives right next-door to that awful place,” said Ott, approaching a woman who’d been watching warily but soon shared a woeful tale about life beside one of these rodent-infested, vagrant-magnets. Ott took out her notebook and started writing.

Meanwhile, across the street, Nether was getting pictures of the two-story-high cement-block wall beside a weedy lot.

“Mmmm, that’s what I look for – a big end-of-group wall with no windows,” he said. His politically-pointed (and not-technically-legal) murals work best, he explained, on one of these large architectural “canvases.” 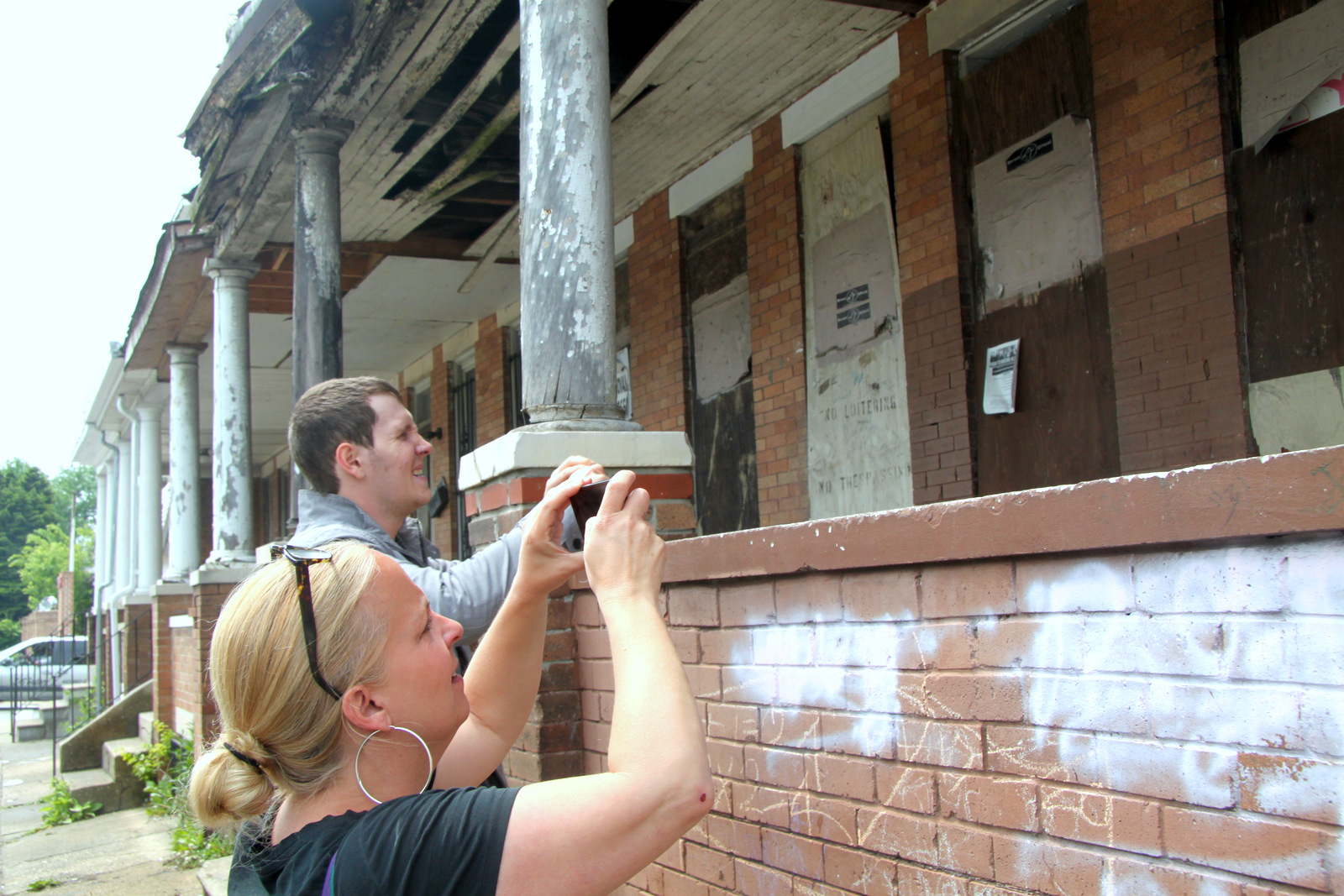 Carol Ott and Nether documenting Baltimore vacants they plan to include in their project this summer. (Photo by Fern Shen)

Ott and Nether are not newcomers to a decades-old Baltimore problem: street after street of boarded-up houses.

For the past three years, she has been shaming delinquent property owners, pushing city officials and advocating for neighbors on her Baltimore Slumlord Watch website. During that same time, he was wheat-pasting and painting his art on, unbeknownst to him, many of the same vacants that Ott was writing about.

Their decision to collaborate has stoked the imagination of this unlikely duo – the 45-year-old Pigtown mother of two and the 23-year-old artist whose work appears in galleries and on walls from Bushwick to Brazil.

“The first idea for this was super-hypothetical, like ‘oh this’d get to them, like, stab ’em in the eye,’” Nether said, grinning, to two Brew reporters watching him and Ott at work. “But then we realized, we could do it.”

Putting Damning Data on the Street

Their joint project, WallHunters: The Slumlord Project, includes 15 murals on Baltimore vacants (to be made this summer by prominent street artists invited by Nether) plus a film about Baltimore’s vacants and the people who live among them (being made by Tarek Turkey and Julia Pitch.)

But perhaps the most innovative feature is the set of huge QR codes Nether will be putting on vacant properties in connection with each mural. These will lead the curious, via cell phone, to one of Ott’s fact-filled blog posts. 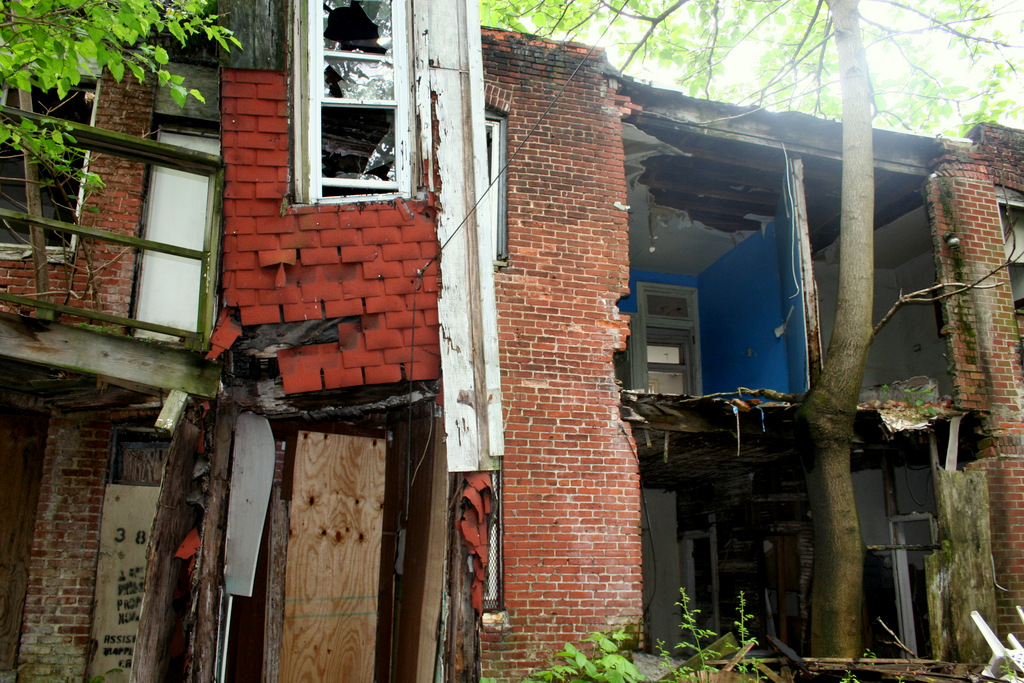 Back side of Reisterstown Road vacants. (Photo by Theodore Epstein)

The post will typically include a photo of the particular blighted property, plus the name and address of its owner, any past history of violations, the elected officials who represent the area, their contact information and whatever other details Ott can ferret out.

If the facts don’t, metaphorically, “stab ‘em in the eye,” Ott’s occasional withering commentary may.

“He’s a real piece of work,” she wrote of one of the Reisterstown Road property owners. “I think when you’ve been the defendant in over 500 lawsuits . . . something needs to give.” A commenter joined in, observing that the landlord himself lives in one of the city’s more affluent neighborhoods. 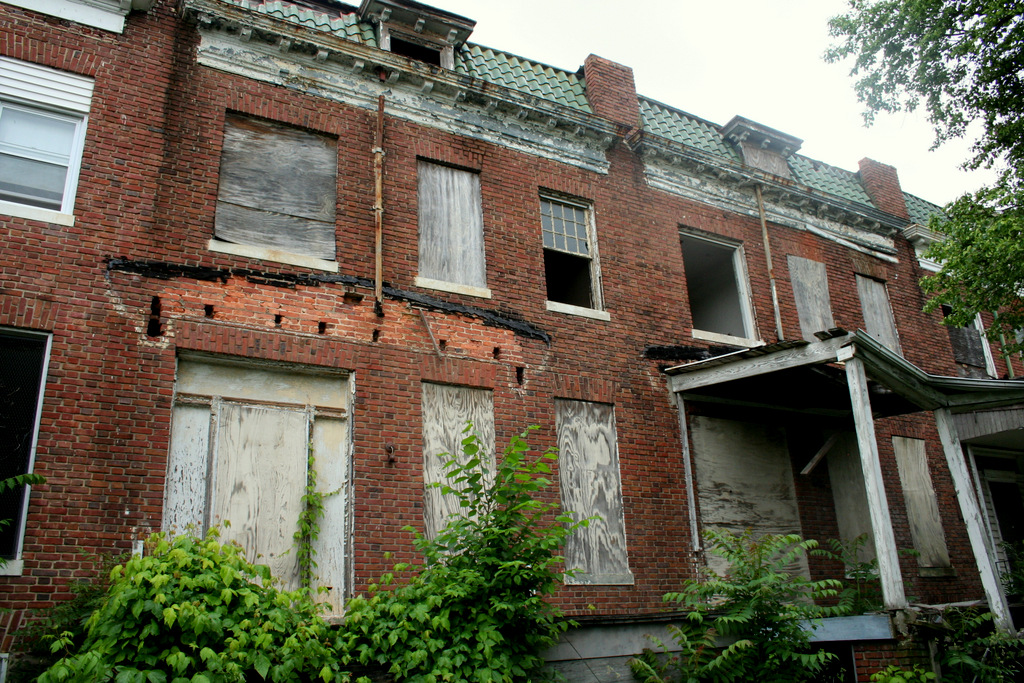 Vacants in the 3800 block of Reisterstown Road, discussed in the Baltimore Slumlord Watch website. (Photo by Theo Epstein)

The project is being funded with $12,000 from a mystery donor and an additional $8,000 they hope to raise from a crowdfunding website they’ve made on indiegogo.com.

Kickstarter rejected their application as apparently too political, advising them, “If you think you can reframe your project to better focus on the creative aspect rather than the cause let me know and I’ll be happy to take another look.”

Ott and Nether say they hope their project will get the public to focus – in a more informed and urgent way – on the ocean of vacant structures that sometime seem to be engulfing the remaining residents of the shrinking city.

“We’re going to bring recognized artists to publicize our project and get people to talk about the issue,” said Nether, a lifelong Baltimore resident who, like most street artists, goes by a nom de paste. “Nobody’s willing to call these people out. We will.”

City officials say there are 16,000 vacant buildings in Baltimore, a sore point with Ott who says the number is more like 40,000.

The city’s estimate is tied to its Vacant Building Notice (VBN) list, based on complaints about vacant structures. Her number comes from a Johns Hopkins study done in the 1990s, as well as unoccupied homes noted in the census survey, foreclosure numbers and structures “where home owners just walked away and nobody knows they’re empty.”

“I think it’s important to take these ‘shadow vacants’ into consideration, since they don’t look empty but they are,” she said, adding that there are some in her neighborhood and others across the city.

Ott reserves most of her ire for slumlords and alternately works with and hocks on the Councilmembers and city housing officials she thinks should be better policing them.

She says bashing the mayor is short-sighted (“Stephanie Rawlings-Blake did not create this problem”), but has low regard for the chief solution that the mayor offers, her Vacants to Value program.

“There’s not enough vetting of the buyers, if there’s any vetting at all,” she says, in an email. “Many of the same bad apples are buying properties through V2V.”

Ott is hoping that by shining a harsher light on the vacants, the Wallhunters project can create the momentum for more effective programs and reorder policy priorities.

“Hey, how about instead of tax breaks for developers, how about using that money to redevelop places like West Baltimore where people feel incredibly ignored?” she said.

“Redevelop the city for the residents that live here now, not the ones you want to bring in.”

Highlighting the needs of Baltimore’s bleak landscape through murals isn’t new and has even become somewhat mainstream after the Station North “Open Walls” project. (It was kicked off by Mayor Stephanie Rawlings-Blake and lauded by the governor and other officials at the 10-year anniversary of that arts district, an area that now attracts MICA artists, music and microbrew-pubs.)

But Nether is excited about the idea of putting large murals by big names like Gaia, Tefcon and Mata Ruda in places like Cherry Hill and Pigtown that have not gotten the elite mural treatment. 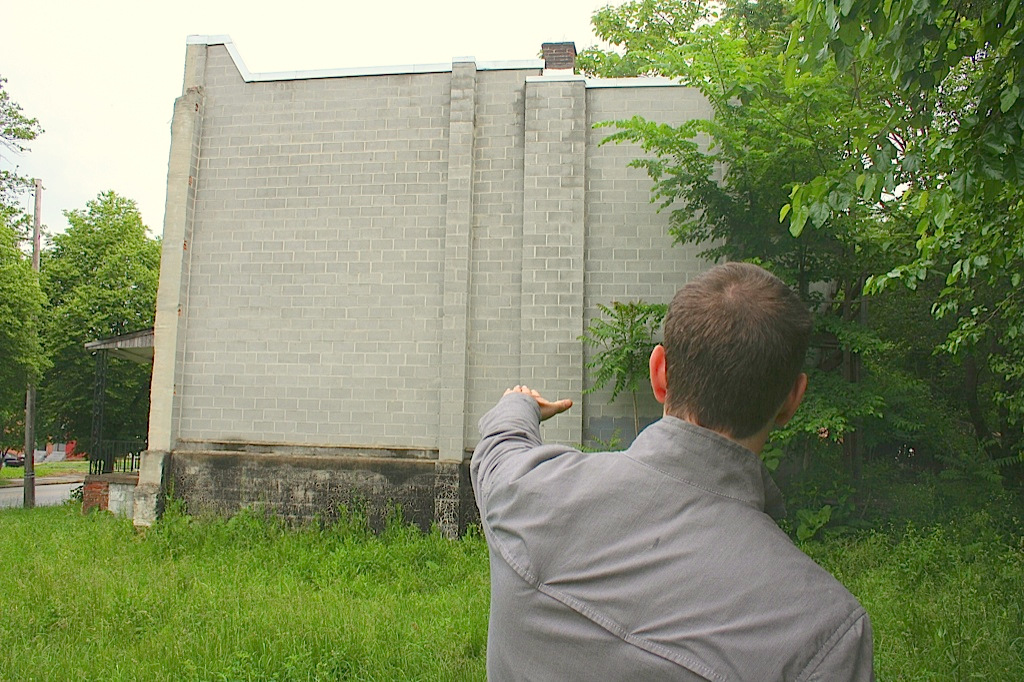 Nether checking out a possible wall for the project. (Photo by Theodore Epstein)

“There’s going to be one in every councilmanic district,” he said.

He and Ott both both want to make sure the story of the residents struggling to live amid the vacants is told as well. They’re looking to the film project, underway for months now, to capture their interactions in the neighborhood.

“People welcome us for the most part. They’re frustrated, they’re glad we’re outing these people,” he said, acknowledging he has had the occasional bad encounter. (“Once these kids were talking to me for like 30 minutes and then all of a sudden they put a knife to my neck and robbed me.”)

Police generally give them a look and then keep going.

“The cop rolls by, you just keep pasting. I just wave and tell them we’re beautifying the neighborhood,” Nether said. “I don’t have a can of Krylon in my hand. I look like a professor or somebody’s mother,” Ott adds. “How threatening can I be?”

In some ways, they’re working against time, as the structures are demolished or fall into deeper dilapidation and sometimes, literally collapse. (“Me and Mata Ruda did one in Barclay and it was gone the next day.”)

“They just get tired sometimes, these buildings,” said Ott. Nether agreed: “There are way too many sad places in this town.” 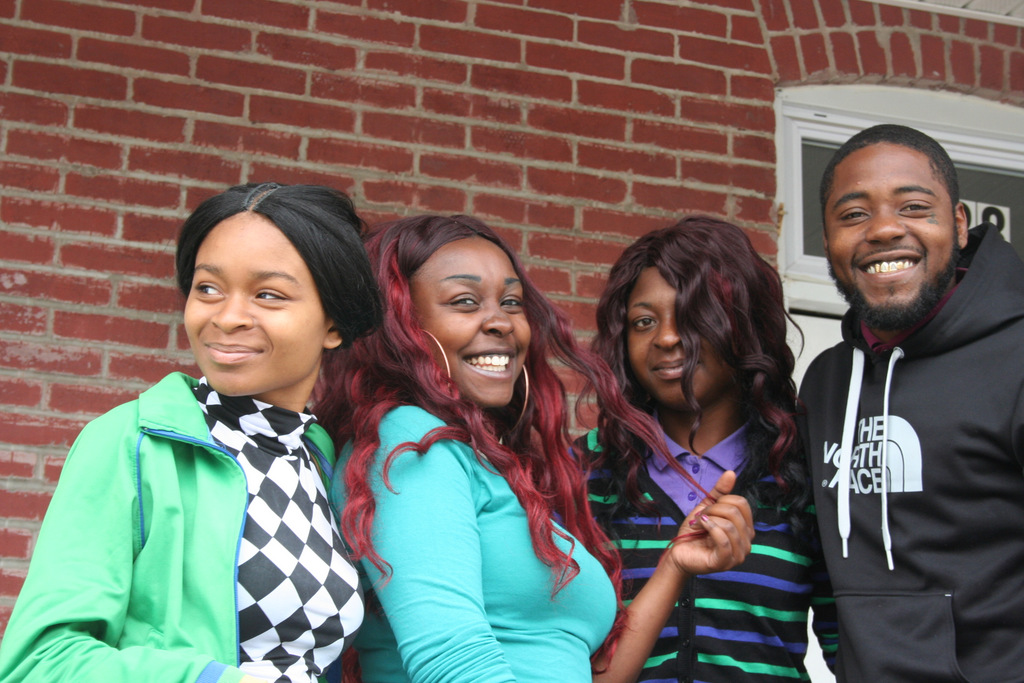 Next door to vacants on Park Heights Avenue. (Photo by Theodore Epstein)