Lobbyist Lisa Harris Jones has been pooh-poohing the idea that she’s anything more than a practicing attorney ever since news broke that Mayor Stephanie Rawlings-Blake officiated at her Las Vegas wedding to lobbying partner Sean Malone and then stayed at Jones’ Rehoboth Beach summer house immediately following the nuptials.

But it’s hard to think of the polished 45-year-old as anything but a power player given that she hobnobs with the governor’s brother in Vegas clubs, gets Facebook shout-outs from a who’s who of city and state officials and has nothing but love from many quarters.

“Why do you think you’re so good at this?” cooed WEAA radio host Anthony McCarthy on a June 5 show in the wake of the Vegas wedding story, adding, “Full disclosure, these are my friends!”

But it’s Jones’ relationship with the mayor that’s in the spotlight now, with Rawlings-Blake today challenged to defend her Memorial Day weekend stay at the vacation home of a lobbyist whose firm represents nearly half of the total businesses seeking favors from City Hall.

The mayor said she paid Jones $400 for her stay at Jones’ vacation house, located just off the Coastal Highway, Route 1. “She rents out her property to me and to others. I paid for it. . . I rented it. I don’t have the exact figures. I paid the common rental rate,” the mayor said. 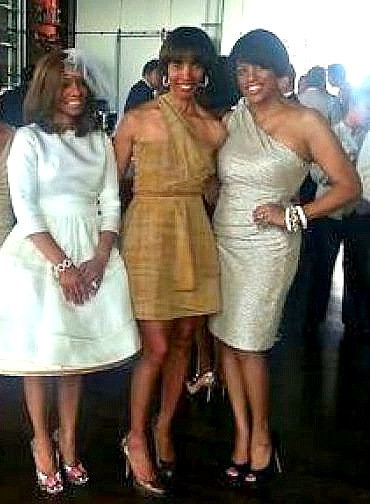 The bride and the mayor (with state Sen. Catherine Pugh sandwiched between) taken at the May 21 wedding.

In a statement emailed to WBAL today, Jones reiterated that “while I do not usually charge people who visit when I am at the house, Stephanie always insists on payment, as she did for Memorial Day weekend.”

There are no provisions in the city charter (or advisory rulings by the city ethics board) that forbid lobbyists and public officials from socializing – or having sleep-overs with their families.

Asked today if the two ever talked “business” over the weekend, the mayor said, “Never.”

Would the mayor recuse herself from votes on matters involving Jones’ clients? Her spokesman has not responded to the Brew’s days-old query on that point.

To many members of the city’s political elite, even the mention of possible conflicts of interest involving Jones and Rawlings-Blake raises hackles – not to speak of accusations of sexism, if not racism.

According to state Sen. Joan Carter Conway, a matron of honor at the Jones-Malone wedding, “You can’t expect people who work together to not have personal relationships or to abandon their friendships because they work together.”

Conway, who is chairman of the General Assembly’s Education, Health and Environmental Affairs Committee, she said she’s known Jones for years through a friendship with her mother.

“I’m like a godmother to them,” she said of Jones and Malone. Asked if she can be impartial when the couple comes before her committee in Annapolis, Conway said, “Yes.” (Conway said she paid her own way to the wedding and did not use public funds.)

Asked the secret of Jones and Malone’s success as lobbyists, Conway said, “They work incredibly hard. Lisa is always, like, ‘Hold on, I have to take this call.’” During the 90-day legislative session, Jones said on the radio, the two lobbyists work 14-hour days.

She is co-chair of The Journey Home’s Benefit Committee, a group that raises funds to support the mayor’s program to end homelessness in 10 years, and works pro-bono for the House of Ruth, which provides support services for battered women.

Another Lisa Jones can be seen in her sometimes abrupt manner when she is challenged, according to City Hall insiders – and her reported “pushiness” in letting department heads know of her “in” with the mayor.

The personal relationship between Jones and the mayor dates back to childhood and the friendship of Michelle Harris Bondima, Lisa’s mother, and the mayor’s parents – pediatrician Dr. Nina Rawlings and the late state Delegate Howard “Pete” Rawlings.

Both women became lawyers when it was less common for African American women to enter the profession – and both had a knack for gaining traction across the male-dominated byways of local politics. 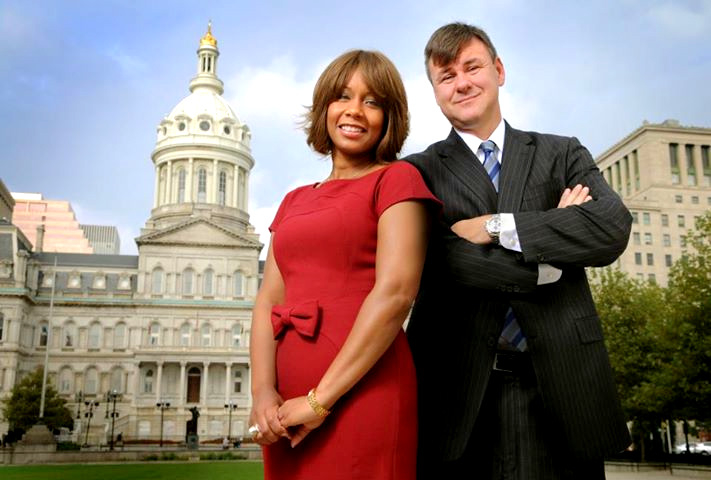 One Client at First

Brought up in West Baltimore by a single mom who later got a Ph.D. and today is an administrator at Morgan State University – Lisa showed signs of “wanting more” and “never needing for anything,” as an older friend put it, from an early age. (After she suggested an off-the-record conversation with The Brew, Jones backed off from talking to us.)

She graduated from the University of Pittsburgh in 1990 and received a J.D.  from American University’s College of Law in 1993. Her first years were spent as an associate for Shapiro & Olander and Gordon, Feinblatt, where she specialized in real estate transactions, often representing public entities such as the Baltimore Housing Department.

After a brief spell with the law firm of Baltimore Orioles owner Peter G. Angelos, Jones decided to open up her own lobbying and law firm in 2000.

She had just one lobbying client, the Coalition of Minority Business Enterprises headed by Calvin Mims, according to records on file with the Maryland State Ethics Commission.

But she supplemented her income by representing strip clubs on The Block before the Baltimore Liquor Board. (Alcoholic beverage licensing remains a specialty of the firm.)

Looking back, the new millennium represented a seismic shift in Baltimore politics. Martin O’Malley, a long-shot candidate for mayor, won the election in 1999. Among the winners was a young City Council member from Northwest Baltimore, Rawlings-Blake, who had convinced her father to back O’Malley.

O’Malley’s victory brought a taste of power to a younger generation of politicians, together with new opportunities for minority businesses to cut through the “old-boy” network and win city contracts.

After dating Lawrence A. Bell III (the city council president who was trounced by O’Malley), Lisa Harris wed Pless B. Jones. He was the ambitious head of P&J Contracting Co. and co-founder of the Maryland Minority Contractors Association, for which Lisa served as counsel.

In another big break, Lisa was hired by Donald C. Fry to represent the Greater Baltimore Committee, the city’s blue-blood business organization, and also began lobbying for Centaur Inc., a racehorse company, before the Maryland General Assembly. 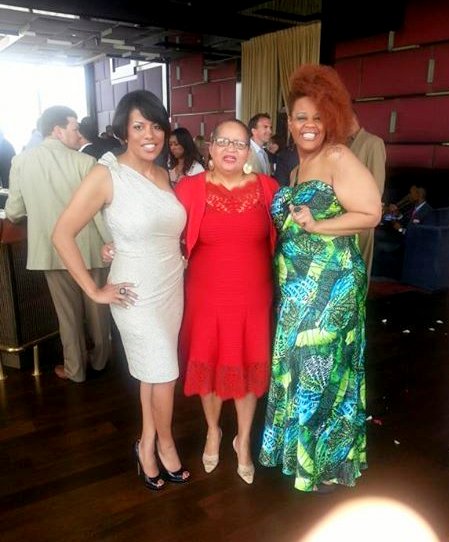 Fast forward to 2009, and Lisa Harris Jones was reporting $697,000 in income from her Annapolis lobbying.

Rawlings-Blake’s victory was a family affair.

(This being “Smalltimore,” Dixon was hired by Pless Jones’ association after she left office and was soon conducting business for the association on the top floor of the Harris Jones & Malone law office in Charles Village.)

In 2008, Jones hired Sean Malone as her partner. Malone was a longstanding member of O’Malley’s inner circle. After serving as chief legal counsel to the Baltimore Police Department and as labor commissioner during O’Malley’s mayoralty, Malone followed his boss to Annapolis, where he served as deputy legislative officer.

It was a match that made some serious rain for the lobbying firm. By 2011, Malone was pulling down $535,500 as an Annapolis lobbyist, according to state records, while Lisa was reaping $857,000. 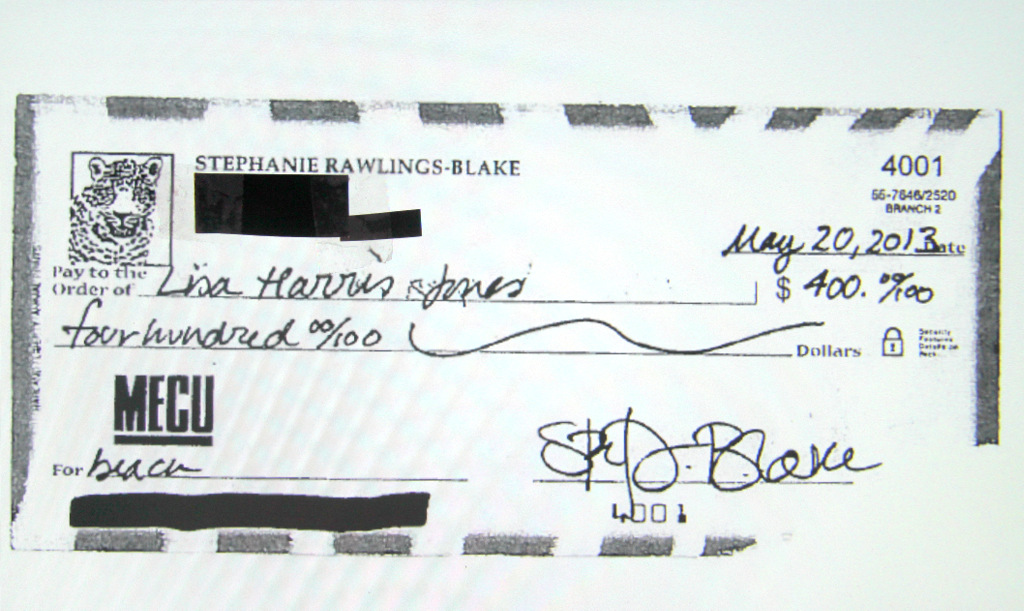 A copy of the $400 check city officials say was made out to Lisa Harris Jones by Mayor Rawlings-Blake for the beach weekend.

And these numbers refer only to the lobbying work they were doing at the state level.

Harris Jones & Malone remained very active in city affairs, with Jones representing many of the same “white-shoe” corporations they advocated for in Annapolis.

While her law firm thrived, her marriage to Pless Jones, the “Demolition King,” withered. The couple filed for divorce in late 2010 and it became final last May. They have one child, Joshua.

“We Probably Had Something to do With That”

Their law firm, meanwhile, has grown to include six lawyers and two government relations specialists, including Robert Fulton Dashiell, a veteran attorney in procurement law, and Caitlin E. McDonough, the daughter of Maryland Secretary of State John P. McDonough.

While Jones and Malone sought to minimize their “power couple” status during their WEAA interview, they also at times placed themselves at the center of major state policy decisions, explaining complex bills to legislators “who trust us.”

“We actually enjoy that we get to learn about everything from telecommunications [to] health care [to] fracking,” Jones said. “I mean the good thing about our practice is that we built it up to a point that generally it is true that whatever goes on in Maryland, we probably had something to do with that legislation, with that policy change.”

In promotional material to clients, Jones and Malone say this about themselves: “Utilizing strong advocacy and negotiation skills, combined with a well-established network of political and governmental contacts, HJM has an outstanding track record of delivering excellent results for its clients.” 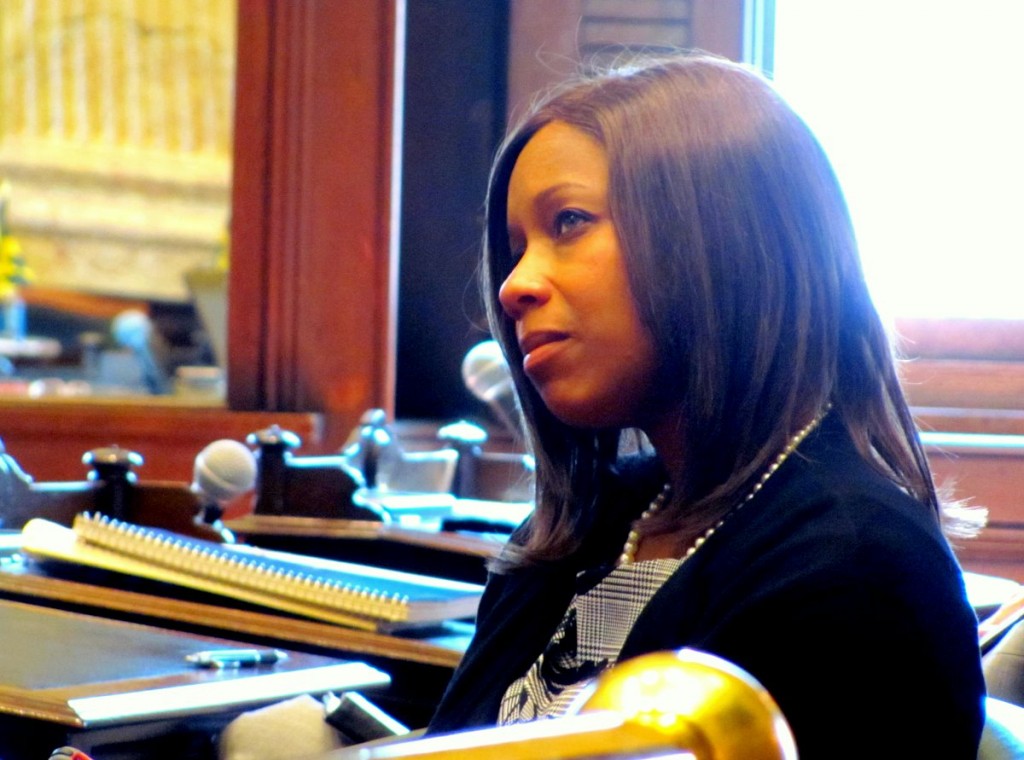 Lisa Harris Jones during a City Council committee hearing last September on a $22.1 million tax break for the developers of Superblock. (Photo by Mark Reutter)

One example took place last year. Jones and Malone were paid $34,000 to represent Lexington Square Partners as it sought a lucrative tax break from the city. Last December, the mayor and City Council awarded the developer $22.1 million in PILOT tax incentives in connection with a reduced sales price for the “Superblock” project on Howard Street.

Just last week, Jones intervened moments before the start of the Board of Estimates meeting and demanded deferment of a $20 million staffing contract that went to a rival of her client, Digicon Corp.

The board’s rules state that protests must be filed by noon the day before the meeting. But Jones’ request was honored and the contract was deferred.

Today, following lots of publicity about the deferment (here and here), the contract was given to TeleCommunication Systems. Jones was not present, and the mayor did not  comment.