While not yet a fixture like Penn & Teller or Cher, Mayor Stephanie Rawlings-Blake is getting in her showtime at Las Vegas.

Less than a month after she spent five days at a shopping center convention – and took time out to marry City Hall’s top lobbyists, Lisa Harris Jones and Sean Malone, at the Mandarin Oriental Hotel – the mayor will savor the “City of Lights” once more during a weekend-long meeting of the U.S. Conference of Mayors.

The Board of Estimates is set to approve $4,182 for the travel, meals, registration fee and lodging of Rawlings-Blake and Andrew Smullian, her deputy chief of governmental affairs.

The cost of Police Department security, which accompanies the mayor on out-of-town trips, was not disclosed in the board’s agenda. 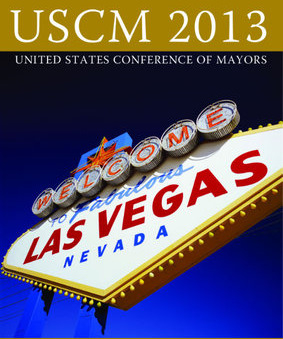 The mayor will attend the conference through next Monday, according to her office, and will make appearances at three meetings.

She’ll speak on Baltimore’s food desert strategy (“A Catalyst to Address Health, Employment and Economic Disparities”), chair a session of the Mayors’ Water Council and address how her administration “engages and connects citizens” through the Internet (an event sponsored by Google).

In-between there will be plenty of time to hang out and enjoy the conference’s various activities, including Friday night’s “Surf Party at Mandalay Bay Beach,” Saturday’s excursions to the Fremont Entertainment District, and Sunday’s show by Cirque du Soleil featuring the music of Michael Jackson.

Rawlings-Blake is the only mayor from Maryland registered at the conference. Altogether, 188 mayors, chiefly from mid-sized cities, were registered as of this afternoon.