Freddie Redd and Brad Linde will perform music this Friday at Creative Alliance from “The Connection,” the groundbreaking 1961 film on heroin addiction. An excerpt from the film will be screened. Here is an appreciation of the documentary – shot by maverick filmmaker Shirley Clarke – and the musicians who created the jazz life it depicts.

He is also jazz curator at D.C.’s Atlas Performing Arts Center. In mid-June he played there with altoist Lee Konitz (he’s 86), pianist Florian Weber and drummer Matt Wilson. One of the rewards of producing the shows is occasionally sharing the stage with his musical heroes.

Freddie Redd is another of the elders whose music Linde has championed over the past few years and with whom he has appeared.

Redd, 85, is a hard-bop pianist who played with Sonny Rollins, Art Blakey, Charlie Mingus and others in the 1950s when the music was first happening. An urgent, propulsive accompanist and sanguine soloist who often deploys block chords, he recorded a couple of well-received albums for Blue Note Records at the end of the decade: “Shades of Redd” and “The Connection.”

It was staged at the Living Theater on the Lower East Side and got lots of attention. Leonard Bernstein and Salvador Dali were among the attendees. Painter Larry Rivers thought the dope they were using onstage was real. Redd and the brilliant alto saxophonist Jackie McLean were actors and mainstays of the quartet that provided the music.

The equally notorious film version of “The Connection,” shot in 1961 by Shirley Clarke with mostly the same cast, including Redd and McLean, premiered at Cannes.

It was denied a license for exhibition in New York mainly because of the consistent use of the word “shit” throughout the film as a reference to drugs. Clarke and her producer filed suit.

Rebel with a Cause: Documentary filmmaker Shirley Clarke. (projectshirley.com)

The case went all the way to the New York State Court of Appeals. Their ruling allowed the film to be shown, but it was not a hit with the critics or at the box office. It was, however, a success as an early test case in the movement to abolish New York State’s censorship laws.

“The Connection,” Clarke’s first feature film, has been restored and is being distributed by Milestone Films, as is another of Clarke’s projects, “Portrait of Jason,” about a gay African-American hustler. She also did a film on poet Robert Frost, which won an Academy Award for documentary feature, and on saxophonist Ornette Coleman.

A reassessment of Shirley Clarke and her films is overdue, according to New York Times film critic Manohla Dargis. “Dancer, bride, runaway wife, radical filmmaker and pioneer – Shirley Clarke is one of the great undertold stories of American independent cinema,” Dargis recently wrote.

Clarke was one of the few female independent filmmakers working in the documentary genre 50 years ago, and her hustler-hipster-jazzman-junkie subject matter hardly put her in the mainstream.

This was not an accident – she herself harbored strong feelings of rebellion and alienation, which she expressed in her choice of material.

The daughter of a wealthy New York merchant who was abusive, Clarke attended, among a string of others, Johns Hopkins University.

She became a dancer and a Bohemian and later hooked up with Carl Lee, a drug user who played Cowboy, the “connection” in the play and the film. She also began using drugs.

After making films, she worked in video in her Chelsea Hotel penthouse and enjoyed a brief rediscovery before she died in 1997 following a stroke.

In an interview with The Brew, Freddie Redd recalled the events that led to his writing the score for “The Connection.”

“Garry Goodrow, an actor [who appeared in the play and the film], and I both had lofts on the Bowery. He told me he was involved in a play and they needed music. 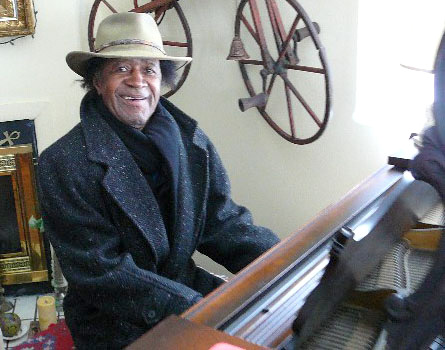 “So we met Jack Gelber in a bar on the Bowery and drank some beer. They explained the plot, something I was very familiar with. They wanted to play standards, but I said no, I could write the score.

“We took it to Julian Beck and Judith Malina [operators of the Living Theater]. About that time, I lost my cabaret card. I got caught in Central Park with some marijuana. It meant I couldn’t work. But the [authorities] didn’t have any control over the play. We did 17 months at the Living Theater and then went to Europe.”

The infamous New York cabaret card system required all performers in the city’s nightclubs to have a valid card, which could be revoked for a variety of reasons, political and on other pretexts. The system was rife with corruption.

The New York City Police Department, which controlled it, and the federal Bureau of Narcotics were particularly aggressive when it came to jazz musicians. Many, including Charlie Parker, Thelonious Monk, Jackie McLean and Billie Holiday had their cabaret cards revoked for drug possession.

The practice was ended in 1967 after a citizen’s group that included Norman Mailer and George Plimpton confronted the authorities, with civil liberties lawyer Maxwell T. Cohen, and finally won their case.

“Shirley Clarke saw the play and talked to the Becks,” Redd continued. “They liked the idea of the film. The next thing we knew we were in the studio where they built the set. How many people get a chance to work in film?” “The Connection” was filmed in 20 days for just $177,000.

Like Shirley Clarke’s films, Freddie Redd’s Blue Note albums, including “The Connection,” have been reissued, and his off-and-on jazz career has had a late-blooming resurgence. 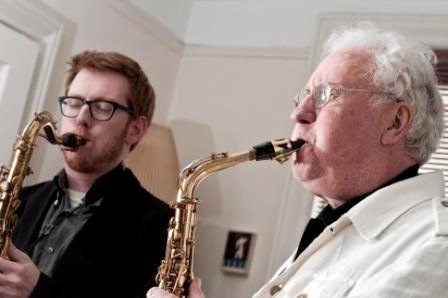 This is partly due to the efforts of Brad Linde, who came to the University of Maryland from North Carolina to attend its master’s degree in music program.

“Lee Konitz took me on as a student and we developed an affinity for each other. It felt real to me.”

(Konitz is one of the two survivors who played on the famous Miles Davis “Birth of the Cool” recording in 1948.)

During his two years at College Park, Linde played in the big band and developed his event-organizing skills by booking artists for the university’s “Take Five” series that included theater, dance, chamber music and jazz performances, free and open to the public.

Not a Renewable Resource

After graduating from Maryland, Linde started a repertory ensemble and was teaching Freddie Redd’s music.

The next step was to locate the elusive pianist, which he accomplished in 2009, and to arrange some gigs in New York clubs.

Linde has recorded two CDs with Redd, one a live date at An Die Musik, and the other featuring the pianist’s unrecorded compositions. These days Linde has been appearing often with Redd, who moved to Baltimore, and occasionally with Konitz, still in New York.

What’s it like to play with musicians 50 years older?

“They’re like my grandfather,” Linde told us. “I have such respect for them. I can deal with the curmudgeonly attitude sometimes. Lee Konitz doesn’t need another horn on stage, but there are rare moments when I get to stand there and improvise with him. It’s not a renewable resource.”

Freddie Redd returns the compliment. “Brad Linde is a very astute guy, a fine soloist actually,” and adds that he’s looking forward to Friday’s performance.
_____________________
James D. Dilts, a longtime Baltimore architecture critic and historian, is also a former Downbeat correspondent and a reporter for The Sun.