Two years ago, as the Rawlings-Blake administration strong-armed the city’s preservation board to approve the $150 million “Superblock” plan for the Westside, a veteran CHAP commissioner was overheard confiding the following to another commissioner:

“Don’t worry. This project will never get built.”

For years, it’s been an open secret that the grandiose plan for Baltimore’s former retail center on Howard and Lexington streets was deeply flawed – shunned by the retail chains that were supposed to flock to the site and beset with unrealistic economic assumptions.

Yet somehow the message never got to Mayor Stephanie Rawlings-Blake and her inner circle. These hard cold realities were what doomed the project, not the efforts of preservationists and civil rights activists to preserve facades, a convenient scapegoat cited by advocates of the plan.

But batting away any suggestion that the city’s exclusive contract with Lexington Square Partners should be revisited, the mayor insisted that the Superblock was her top economic priority.

She spent enormous time and political capital – not to mention taxpayer funds – to push through the development, even getting her pastor, Rev. S. Todd Yeary, to publicly back the project as a “job creator.”

Attempting to fit this square peg into a round Westside hole, City Hall allocated millions for tax breaks and demolition while the developers, who never actually made payments on the property, spent relatively little.

That is, until this week when, in a dramatic reversal that’s been underplayed in the media, the mayor effectively switched sides, withdrew the exclusive contract with Lexington Square and has even started talking about a “smaller scope” and “a diverse group of developers” for the site.

This comes from the same mayor who approved a $22 million PILOT tax break to the developer last December and, perhaps more importantly, agreed to sell the parcel for just $2.85 million – $19 million below the appraised value when the city first entered into an agreement with Lexington Square in 2007.

Besides receiving zero property tax revenues on 3.6 acres of prime downtown property (the city purchased the site’s buildings years ago and ejected the small retail businesses), the Rawlings-Blake administration allocated $2.52 million to demolish the former Greyhound bus terminal and related projects, and $500,000 (including a recent “extra work order“) to stabilize the deteriorating Read’s Drug Store building.

What’s more, as The Brew has pointed out here and here, the core developers were a shadowy lot who never appeared in public hearings, preferring to rely on their City Hall lobbyists (Sean Malone and Lisa Harris Jones) and local attorneys (Jon M. Laria and Mark Pollak of Ballard Spahr) to present their case.

The group has not responded to Brew requests for an interview made through their lobbyists. 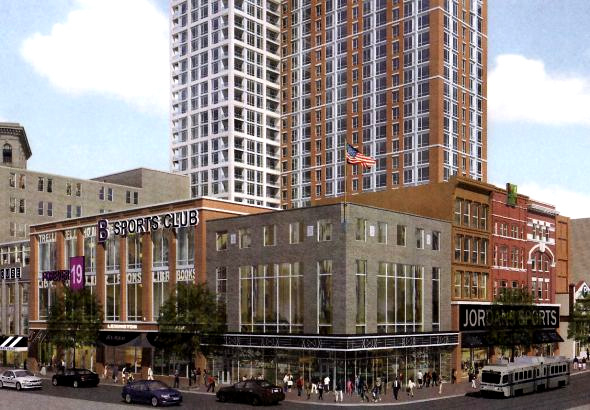 A drawing submitted in 2011 of the proposed development. Even after the courts cleared the way to move forward, the developers never came up with anything concrete. (Lexington Square Partners, 2011)

Lexington Square Partners is comprised of “the Four Families from New York” – a phrase that was used by the development group – that controlled the purse strings, and the Dawson Group, a minority business from Atlanta that did show up for the public hearings.

The “four families” were the Chera, Goldman and Feil families, active in Brooklyn and Manhattan real estate, plus the Nakash family, owners of Jordache, the jeans company. They own 80% of the partnership, and Dawson, who entered the partnership late, has the remaining 20%.

The “four families” were granted an exclusive agreement to buy the Superblock in January 2007 – one of the parting acts of Martin O’Malley as he transitioned from Baltimore’s mayor to governor of Maryland.

The group proposed tearing down the majority of buildings on the site – bounded by Howard, Lexington and Fayette streets and Park Avenue – and erecting a high-rise apartment building, 650-space parking garage, 217,000 square feet of retail space, and possibly a “boutique” hotel.

From the start, their plan was controversial, with preservationists saying it  violated a 2001 memorandum of understanding between Mayor O’Malley and the Maryland Historical Trust to preserve as many as 17 historic buildings on the site.

Both the city and Lexington Square refused to compromise, and a series of lawsuits were filed by third parties, including by a developer rival, Carmel Realty Associates.

Meanwhile, Lexington Partners’ plan to demolish the former Read’s Drug Store at Lexington and Howard streets sparked an outcry by some civil rights leaders, who noted that a historic sit-down demonstration had taken place in the building.

Should Have Been a Clue

This should have been another warning sign – that “but for” a huge public subsidy, the project made no economic sense.

Instead, for the latter half of 2012, the City Council went along with the fiction that the Superblock could attract private financing if sufficient public underwriting took place.

Retail jobs created by the Superblock would pay an average salary of $20,800, far less than the amount needed for an employee to live at the proposed project.

The mayor and her allies justified this action by emphasizing the number of construction and retail jobs the project would create.

In one of many documents issued by city agencies, the Planning Department provided these rationales for the Superblock’s tax breaks:

Buried in the verbiage was a significant detail. Retail jobs created by the Superblock would pay an average salary of $20,800, far less than the amount needed for the employee to live at the proposed project.

Back to Square One

Last September, we published a story, “An inconvenient truth about the Superblock,” noting that the developers, by their own reckoning, had made no solid progress in securing a $99.3 million construction loan and had no lease agreements with retail tenants in hand.

Harold Dawson, the developers’ representative, soft-pedaled the lack of hard money, blithely telling the City Council, “I don’t believe there’s a problem at all.”

Now nine months later, the mayor has denied the group’s petition to get another six-month extension to secure private financing.

Instead, Rawlings-Blake says she has ordered the BDC to prepare new data about the market conditions and site characteristics of the two derelict blocks that constitute the city-owned property.

Under consideration will be a project of the “same scope or smaller.” An RFP (Request for Proposals) will be issued in the fall “to attract a diverse group of developers to this project.”

Only time will tell whether the new process – which Kaliope Parthemos, the mayor’s economic development advisor, characterized yesterday as “starting from square one” – will yield a viable project to counteract the years of stasis and physical deterioration that have beset this currently not-so-super block.