The Rawlings-Blake administration plans to spend $59 million over 10 years on public parks at the luxury waterfront Harbor Point development – roughly the same amount the city historically spends on capital improvements for its entire 7,000-acre park system.

Building the parks, tucked between the planned Exelon office tower and other high-rise buildings at the proposed complex, would average a stunning $6.2 million per acre, according to a report from the Baltimore Development Corporation (BDC).

This compares to the $5.8 million in city funds allocated to all Baltimore parklands in the 2014 capital budget. (The city will get another $5.8 million in Maryland Open Space matching grants.)

For further comparison, slightly over $2 million in city capital funds was allocated to 745-acre Druid Hill Park, mostly to rehabilitate a public swimming pool and add parking for the Jones Falls Trailhead.

Patterson Park, a 137-acre reserve that serves Highlandtown and other southeast communities, is slated for only $400,000 in capital improvements this year, the bulk going to remove paving from a city maintenance yard.

Over a Toxic Landfill

The high cost of constructing parks at Harbor Point is a result of the unique nature of the site.

Most of Harbor Point is to be built above a clay-and-plastic membrane that holds the contaminated soil of an Allied Chemical factory.

Once the world’s biggest chromium ore manufacturer, the factory discharged an estimated 62 pounds of toxic chemicals a day before it closed in 1985, according to the Environmental Protection Agency (EPA). A $100 million environmental remediation was performed in the 1990s by Honeywell, the current owner.

Extreme caution and care must be taken not to penetrate or compromise the cap, five feet deep and ringed by a slurry wall, that has so far prevented surface releases of hexavalent chromium, a known carcinogen if inhaled.

The cost of elevating the parks with fill and structural steel to even out the grades with the streets and buildings of Harbor Place accounts for more than half of the “infrastructure costs” that the Rawlings-Blake administration is willing to finance through TIF bonds to get the project underway.

Another $21.6 million in city bond money is slated for a waterfront promenade that would connect Fells Point and Harbor East.

In all, $81 million of the planned $107 million (or 76%) in TIF tax incentives would be funneled to the luxury development’s parks and the promenade, as opposed to roads, sewers and other traditional infrastructure.

This afternoon a City Council committee, headed by Councilman Carl Stokes, will review the mayor’s plan to offer the $107 million in TIF tax incentives for Harbor Point to build these facilities.

Is the Full Subsidy Necessary?

Stokes has expressed skepticism about paying for parks he believes will offer limited access to city residents and will mostly benefit the future residents and office workers at Harbor Point.

“This is private land and the developer should pay for improvements and amenities that enhance it,” he said, in an interview with The Brew.
_________________________
PUBLIC HEARING TODAY ON HARBOR POINT

WHEN: 5 p.m.
WHERE: 4th floor of City Hall
WHO: Committee on Taxation, Finance and Economic Development. Chair, Carl Stokes; vice chair Bill Henry; members Warren Branch, William H. Cole IV and Edward Reisinger
AGENDA: Review of proposed $107 tax increment financing (TIF) for Harbor Point, the largest tax credit ever given to a private developer in Baltimore.
WHAT IS A TIF? A funding mechanism whereby property tax revenues  are used to pay for city-issued bonds financing the project rather than going into the city’s general revenue fund. The Harbor Point TIF would be in effect for more than 30 years before full tax revenues would be realized, amounting to an estimated loss of $107 million in property taxes by the city.
______________________

While he could see the rationale for paying for “hard” infrastructure like roads and utilities, Stokes said, the city should draw the line “at having the public pay for adding many feet of fill over the cap,” which should be the developer’s responsibility.

“The city’s parks and rec centers are so underfunded and in lousy condition – why are we going into the business of creating new parks for a limited number of people?” he added.

In broad terms, the councilman says that $15 million to $25 million in public TIF financing would seem to be reasonable, adding that he supports Harbor Point as long as it makes financial sense to the city.

“Our parks system as a whole is collapsing. We are barely getting by. The use of city funds to build a few acres of ‘showpiece’ park on the waterfront is an extravagance that is beyond excessive,” he said.

Delaporte, who ran Recreation and Parks under Mayor William Donald Schaefer, also faulted the “secretive process” in which the city has disguised the role of the developer in determining how and what Harbor Point parks will be built.
_____________________
COST OF FIVE PARKS PROPOSED FOR HARBOR POINT

The Brew’s review of documents shows that the BDC accepted the estimates of developer Michael Beatty’s consultants when determining the public cost of the five parks proposed for Harbor Point.

In its report submitted to the city’s Finance Board, the BDC used the same figures – down to the decimal point – found in the “Preliminary Infrastructure Cost Estimates” by Harbor Point’s consulting engineer, Rummel, Klepper & Kahl

Included in the estimates were various soft costs added to each proposed park by the engineer, including “initial expenses,” “miscellaneous items” and “contingencies.”

In the case of Harbor Point’s Central Square, for example, RK&K estimated that “plaza and park hardscape, landscape, site furnishings” would cost $2.46 million and underground utilities another $874,000.

RK&K also included “contingencies” – described as 35% of the listed construction items – which added $3,279,263.75 to the price. The BDC used this price in its request for TIF tax credits on behalf of the developer. 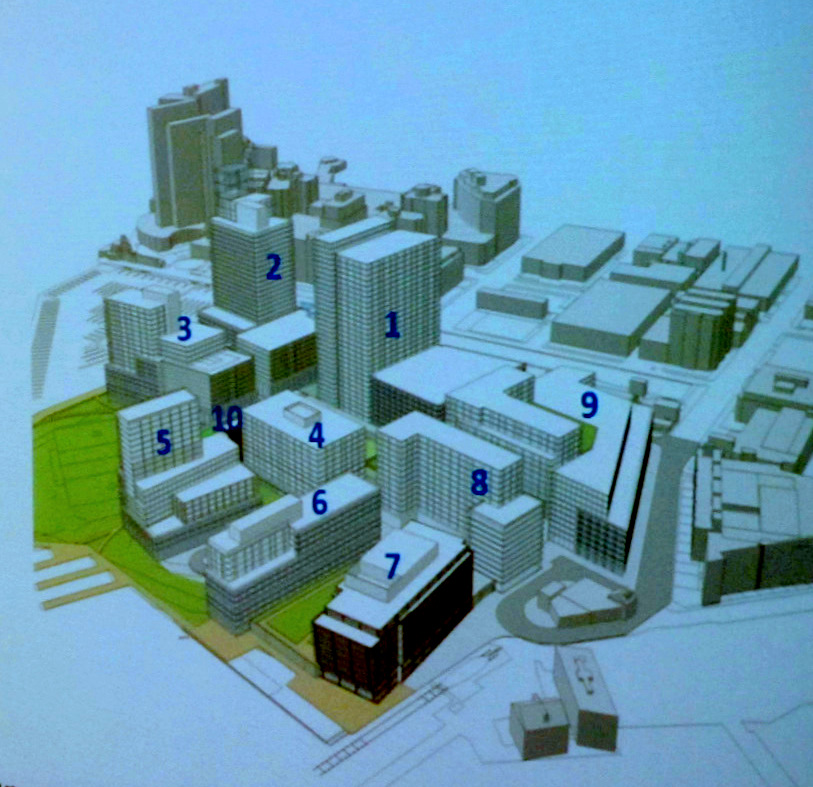 Another view of the layout of the proposed parks with the high-rise buildings at Harbor Point. (Harbor Point Development Holdings)

The biggest expenditure by the city would be for “Point Park” covering 4.5 acres on the southwest tip of the development.

The site had been reserved by Beatty for the headquarters of US Lacrosse Inc., the governing body of men’s and women’s lacrosse.

Last August, the group backed out of the site, which would have featured a “state-of-the-art” lacrosse field.

At that point, the field and headquarters building was reconfigured as a public park – with a price tag of $34.2 million in TIF funding.