It was the first of 15 murals in a project undertaken this summer by a band of street artists and Carol Ott, the award-winning activist who has maintained the Baltimore Slumlordwatch blog for the past three years

Their campaign, Wallhunters: The Slumlord Project, is aimed at calling attention to the city’s tens of thousands of dilapidated vacant buildings – and calling out their owners, along with elected officials and city bureaucrats. Amplifying the message, QR codes associated with each artpiece link back to a fact-filled post on Ott’s blog, listing owners, violations, etc. 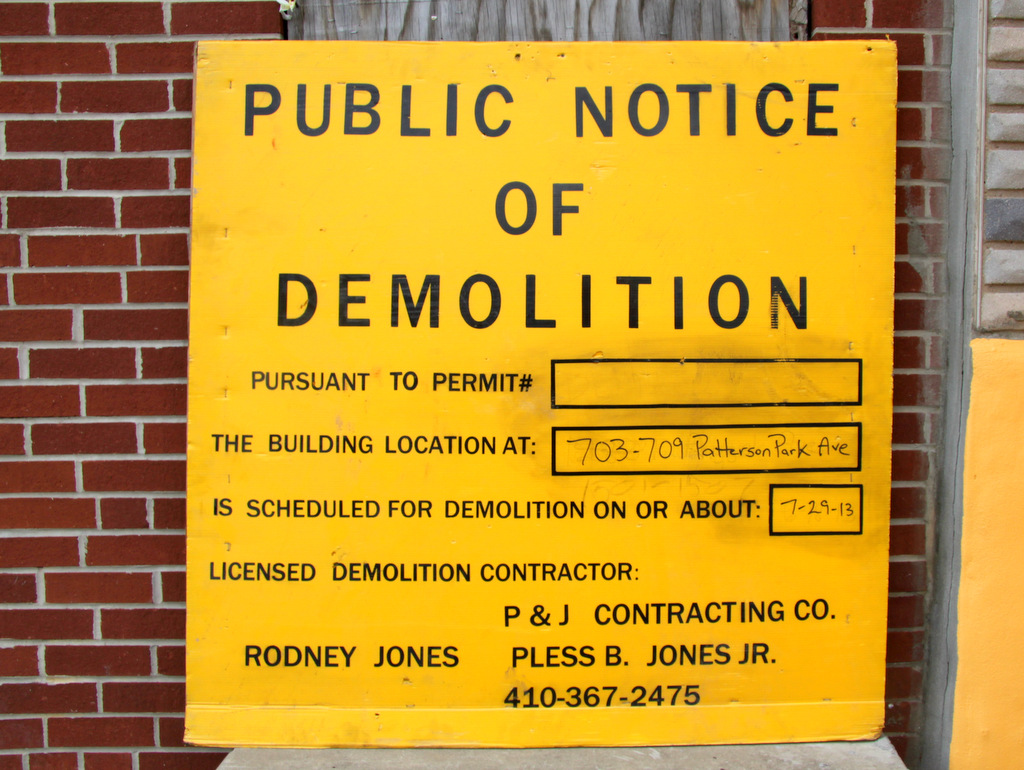 No permit # is cited but the date for demolition is set: “on or about July 29.” (Photo by Fern Shen)

This week, Ott was shocked to learn that demolition notices had been posted on the two buildings (and an adjacent rowhouse on either side).

The white-and-black QR code they had placed near the mural was gone.

The yellow signs say that on or about July 29 – this Monday – P&J Contracting will demolish the four buildings, 703-709 N. Patterson Park Ave. Under the section on the sign where it says “Pursuant to Permit #____” There was nothing filled in Wednesday.

“This is more than a coincidence,” said a furious Ott, speaking with The Brew by phone. Ott acknowledges that the buildings were condemned by the city in 2010 and are extremely dilapidated – the facades were replaced by plywood, the roofs have collapsed.

But that description fits thousands of vacant in Baltimore, said Ott, adding that she could find practically no violations on file for the buildings.

“Why these vacants? Why now?”

Asked that question yesterday, Baltimore Housing Department communications director Cheron Porter chuckled: “It’s not something we ever hear from people about vacants, ‘Why these? Why now?’ It’s usually ‘Why didn’t you do it sooner?’”

Asked why the city ordered the demolition of the four buildings, Porter said in an email that “these were condemned structures that the community complained about.”

Porter said the dilapidated buildings were dangerous, “so bad that DPW couldn’t respond to community complaints for safety concerns.”

So when did the city decide to act on these community complaints?

“Based upon the condition, the complaints and the lack of any other viable course of action, the decision was made to demo more than 7 months ago [December 2012],” Porter said in the email. “Demolition permits were applied for on July 10th, they just haven’t been released yet.”

Ott was not mollified by this explanation. “I just don’t buy it,” she said.

Bring on Your Wrecking Ball?

The Brew could not track down the owners of these properties. (We did reach Baltimore attorney Herbert Burgunder III, resident agent for Afteebe Inc., the New York-based owner of 705 N. Patterson Park Ave. Burgunder said he would forward to his client our request for comment on the prospect of his property being knocked down.)

We also wondered about Ott’s opinion on what should have been done about the property, vacant for many years according to neighbors. Ott’s thoughts are there in a July 10 blog post about 705 and 709 N. Patterson Park Ave., which notes that the city “condemned” the properties three years ago, in July 2010.

“Why the owners haven’t been forced to either clean up the property or sell it is beyond me,” she wrote. 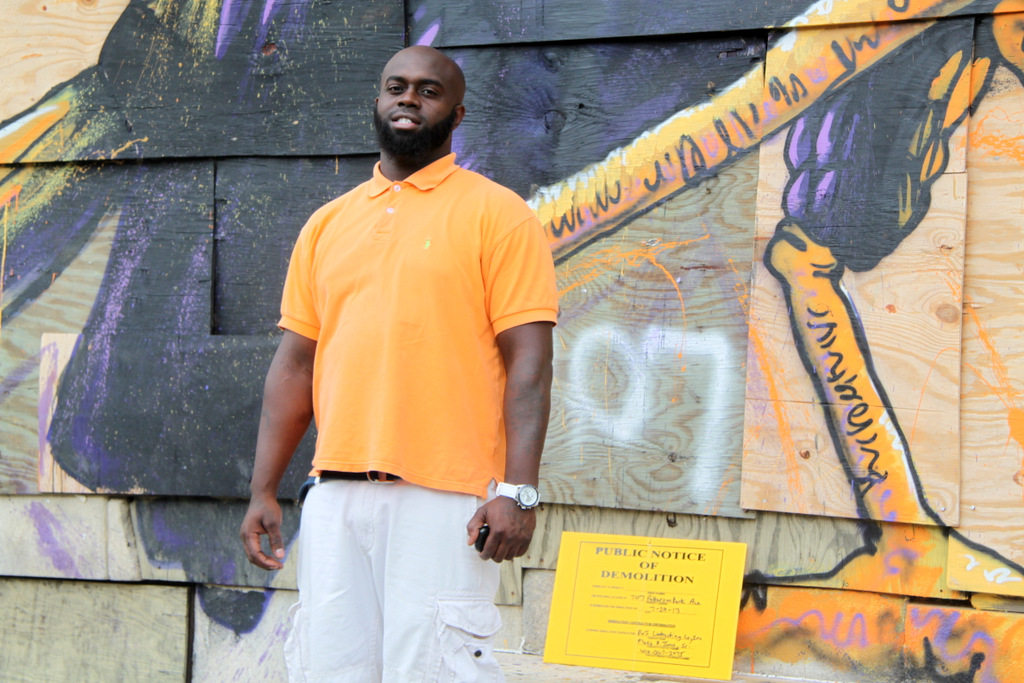 “Why didn’t they do something years ago?” said Antonio Young. (Photo by Fern Shen)

That was basically the reaction of a passerby who lives in the neighborhood.

“But why didn’t they do something about this years ago? It would take $100,000 to fix one of these now,” Young said. “It’s not worth it, you gotta knock ’em down. But you could have saved them a few years ago.”

Back in the mid-90’s all of the buildings on the block had families in them, Young said, looking around at the largely abandoned structures up and down the street.

Meanwhile the artist, Stefan Ways, says he’s alright at this point with the destruction of the buildings – and his mural. (It’s brush-painted, with some spray-painted touches and yellow caution tape fluttering from the bird’s beak.) Street artists know their work is inherently temporary, Ways said. He and Ott and some other artists plan to document the demolition on Monday.

“The goal of this project is ultimately to hold slumlords responsible for their properties, whether that means they get torn down, rehabbed, or fall into better hands,” he said. “All in all, I am happy to see the eyesores go. There are about 47,000 other vacants left to paint!” 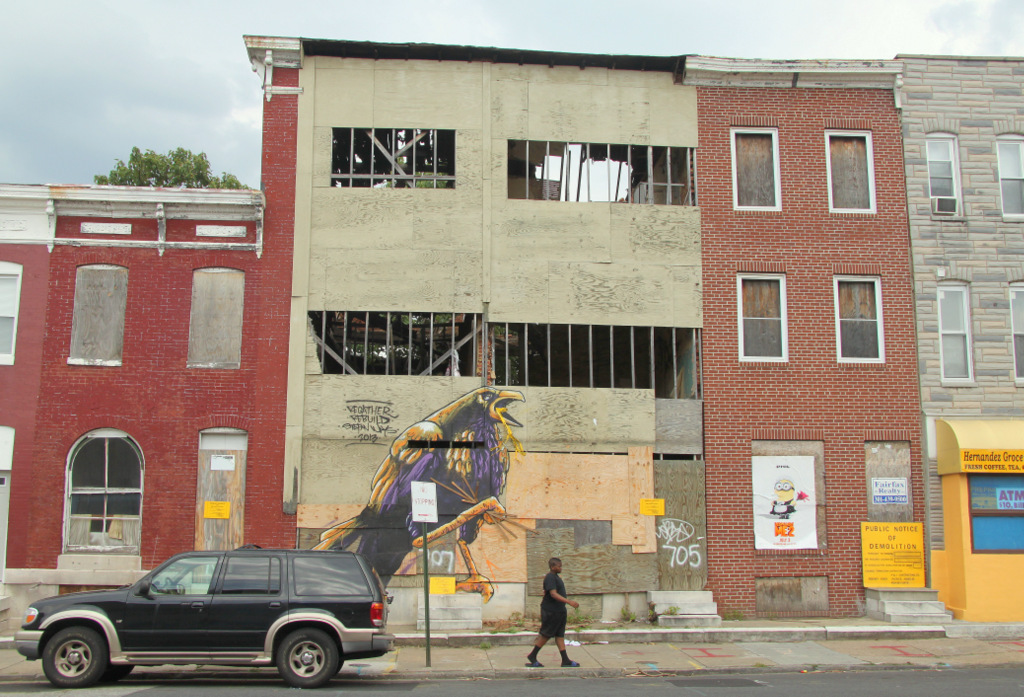