A group of Baltimore clergy – backed by prominent city power players – want $25 million from Michael Beatty as the price for their support of the Harbor Point development, The Brew can exclusively report.

The Brew has obtained a 12-page draft agreement of a “community benefits agreement” drawn up by the Community Churches for Community Development, a group co-founded by Rev. S. Todd Yeary, Mayor Stephanie Rawlings-Blake’s pastor, and Rev. Alvin C. Hathaway.

Now circulating at the highest levels of City Hall, the document calls on a range of payments and services from the Beatty organization, including Internet wireless service and fresh produce for Perkins Homes residents.

The document is the outgrowth of efforts by Councilman Carl Stokes to bring benefits to the poor black community north of Harbor Point, which Stokes said Beatty took advantage of to secure a state “EZ” (Enterprise Zone) tax credit worth $88 million.

The document – which has not been signed by Beatty – asks the developer to pay $25 million into a Community Investment Trust to promote “community empowerment, sustainability, employment and entrepreneurship” at Perkins Homes and adjoining areas of the EZ zone.

In addition, the document calls on the developer to provide three years of free Internet wireless service for Perkins Homes residents, a “fresh produce food delivery system” to enhance the health of the community, and a “dedicated transport system” to connect residents “to economic opportunity and to the amenities of a quality life.”

The clergymen also want Beatty to offer “equity shares” in his development company to “qualified minority, African-American or such other investors whose economic interests, as determined by the Board of Trustees of the Community Investment Trust, are so aligned with the disadvantaged residents [of Perkins Homes] as to promote their economic development.”

Beatty has met privately with Hathaway and Yeary, but has resisted any form of community payments. Given the project’s strong backing by Mayor Rawlings-Blake, he was believed to be immune to the clergy’s importunings.

But the political dynamic is beginning to change.

Pressed to get groundbreaking settled for the proposed Exelon Tower at the site, Beatty is dependent on City Council approval of another tax break for Harbor Point – $107 million in city tax increment (TIF) bonds.

Last month, a City Council committee headed by Stokes stalled a vote on the TIF tax break and has scheduled a “working session” this Wednesday on the legislation. 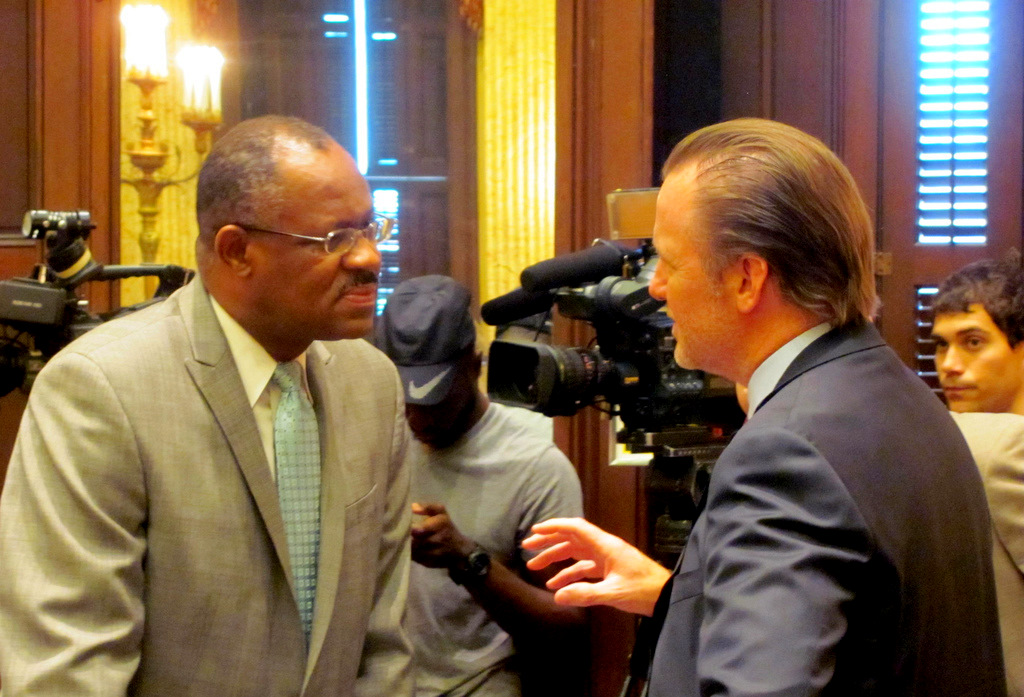 Councilman Stokes confers with Michael Beatty before the start of a hearing on the $107 million Harbor Point TIF last month. (Photo by Mark Reutter)

Beatty is counting on getting the bill past the Stokes committee on Wednesday, so the TIF legislation can win approval before the full Council next Monday.

Not Opposed if “We Are Part of It”

For the last two months, Stokes and Beatty have been playing an increasingly high-stakes game over the use of public funds to finance Harbor Point.

Stokes signaled his desires by saying recently that reports by the Baltimore Development Corporation that he was “against” the $1 billion project were incorrect.

He said that he “very much” supported the Harbor Point project “as long as we – we – are part of it.”

A Cast of Political Insiders

The “we” has become apparent through the signatories of the proposed agreement with Beatty, which would all play roles in the dispersal of the $25 million Community Investment Trust.

They include a “who’s who” of behind-the-scenes players in the city:

ABC would administer the distribution of the $25 million fund within census tracts 203, 201 and 302, and would earn a fee “based upon industry standards. . . including, but not limited to fiscal oversight per federal and state regulations and, when necessary, program/expenditure accountability based upon the decisions of the governance body,” according to the draft agreement.

• Harbor Bank of Maryland, a minority-owned bank with cross-ties to many local politicians and to H&S Bakery owner, John Paterakis, who has served as a bank director since its founding in 1982.

Paterakis financed the Harbor East project with Beatty serving as his right-hand man. While Beatty says Paterakis is not now involved in Harbor Point – having sold his interests to Beatty – the bakery mogul has interests in several parcels on the site as well as the Thames Street Wharf office building that houses Morgan Stanley.

Harbor Bank would hold the deposits made by Beatty for the Community Investment Trust.

The group would select three of the eight members of the board of trustees of the community fund. The group pledges to support the appointment of no fewer than four board members from Perkins Home and the surrounding community.

• The Presidents’ RoundTable, a coalition of minority business owners, would help oversee minority opportunity at Harbor Point. Arnold Williams, chairman of the Baltimore Development Corporation (BDC) that unanimously approved the $107 million TIF to Beatty, is a prominent member of the RoundTable.

• Sojourner-Douglass College would be granted three seats on the eight-member board and would supervise “Change4Real Community Corporation.”

This group – associated with Devon Wilford Said, an author, poet and founder of Hallelujah Praise Ministries – would be the official “community organizing vehicle” of the trust fund.

To get Change4Real up and running, the draft benefits agreement calls on Beatty to make a payment of $300,000 to the group no later than 45 days after the start of construction at Harbor Point.