If you see any elected officials lurking about in a dark corner of your neighborhood tonight, it’s OK – they’re on a mission.

Their mission is to shake hands and say a few words in praise of “National Night Out.” Sponsored by the National Association of Town Watch (which also trademarked the name), National Night Out is an annual event to heighten public awareness of crime and strengthen and celebrate neighborhood watch groups.

It’s something that thousands of people participate in around the country.

So, unsurprisingly, the night has become enshrined in the datebooks of local politicians.

The annual event – and the neighborhood watch patrols it celebrates – was pretty noncontroversial until George Zimmerman gave the notion of amateur sleuths and self-appointed pursuers of bad guys an unsavory taste in some mouths. 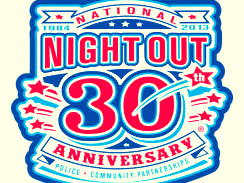 Logo for this year’s Night Out. (National Association of Town Watch)

But no matter. In a city where practical politics always trumps ideology, George Z. is a memory and rooting out “public enemy No. 1” (a phrase favored by Police Commissioner Anthony Batts) gives public servants a lot to talk about.

Gov. Martin O’Malley, for example, is scheduled to join Mayor Stephanie Rawlings-Blake at Mondawmin Mall, where he will express his solidarity with community crime fighters in plenty of time for the 10 o’clock news.

We couldn’t trace the rest of the governor’s itinerary, but we can report that the mayor is in for a busy evening.

She’s scheduled to appear at Night Out events at Ashburton, the Oliver Community Center, the storefront headquarters of Operation PULSE (People United to Live in a Safe Environment), Cherry Hill and Lake Montebello.

His handlers have him scheduled him at Pleasant View Gardens, the Chinquapin Park Improvement Association, an event on East Fairmount Avenue and the Greektown Night Out (to be held on the corner of Lehigh and Gough streets where Ramon Rodriquez was shot dead three weeks ago).

Also in town tonight is Lt. Gov. Anthony W. Brown. He will kick off his own Night Out tour at the Burger King parking lot on Reisterstown Road and Cold Spring Lane.

Brown, who’s running hard to become the next governor (as O’Malley seeks higher, perhaps the highest, office), says he will spend time “participating in discussions” about how local community leaders and safety officers can “partner in the effort to reduce crime in the community and make our streets safer.”

Such discussion will lead him to Mondawmin Mall, where he might or might not catch up with the governor; Oliver Community Center, where he will miss the mayor by a few minutes; and then on to Lake Montebello, where his night of crime busting will come to a close.